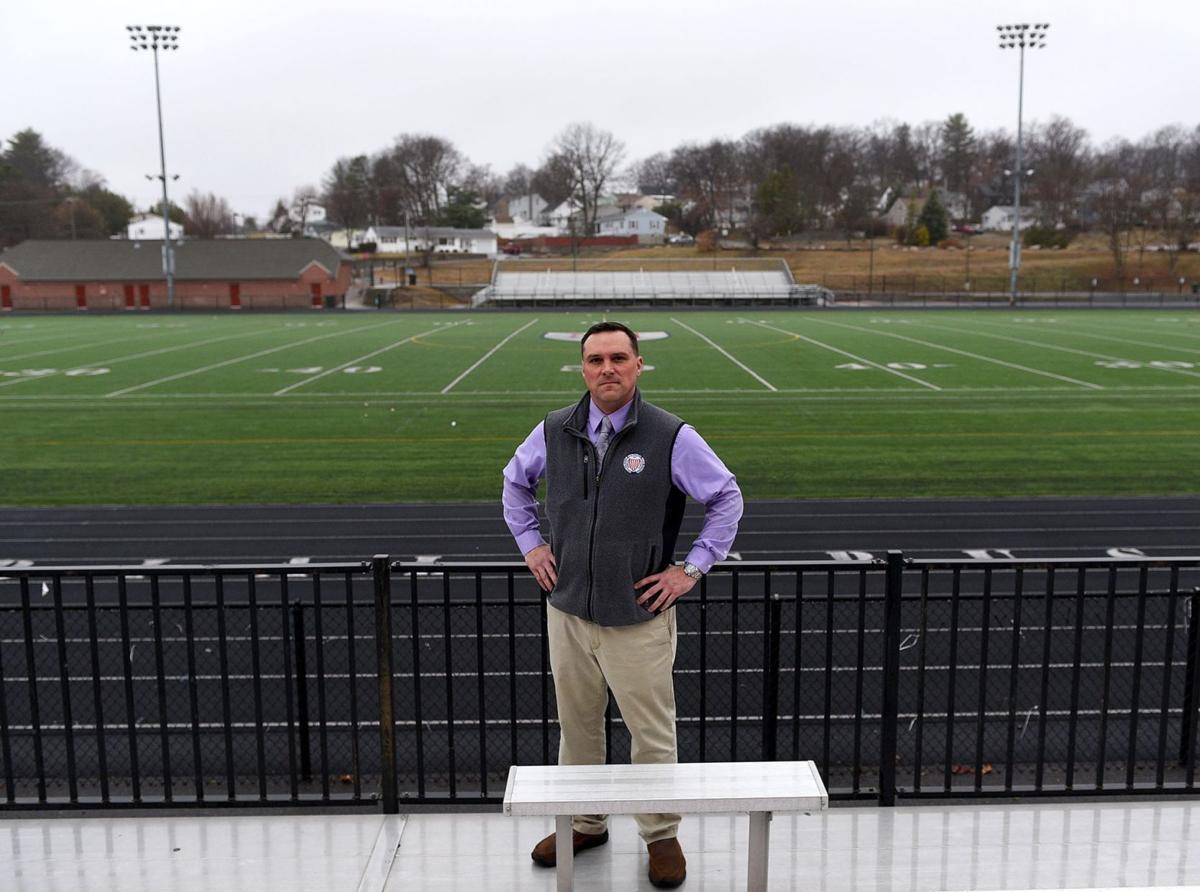 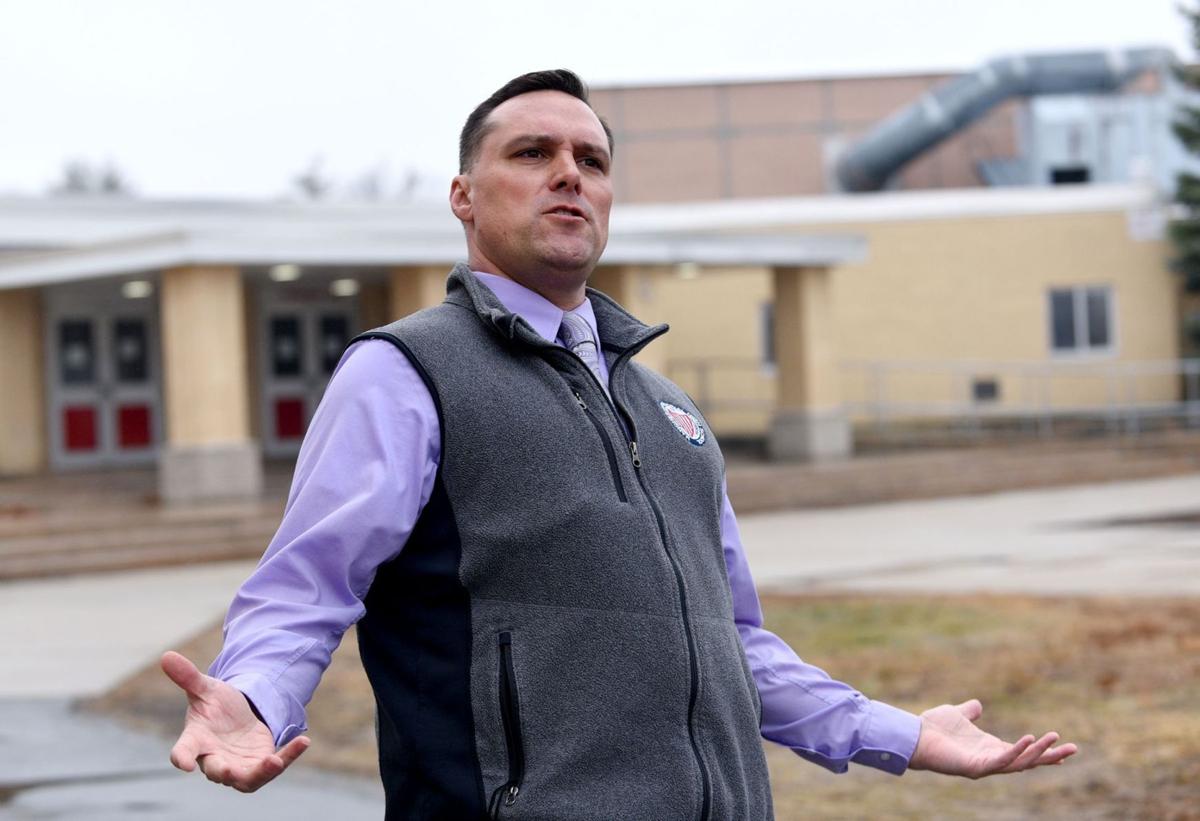 Ray Connolly speaks to a reporter outside Manchester Memorial High School on Thursday. 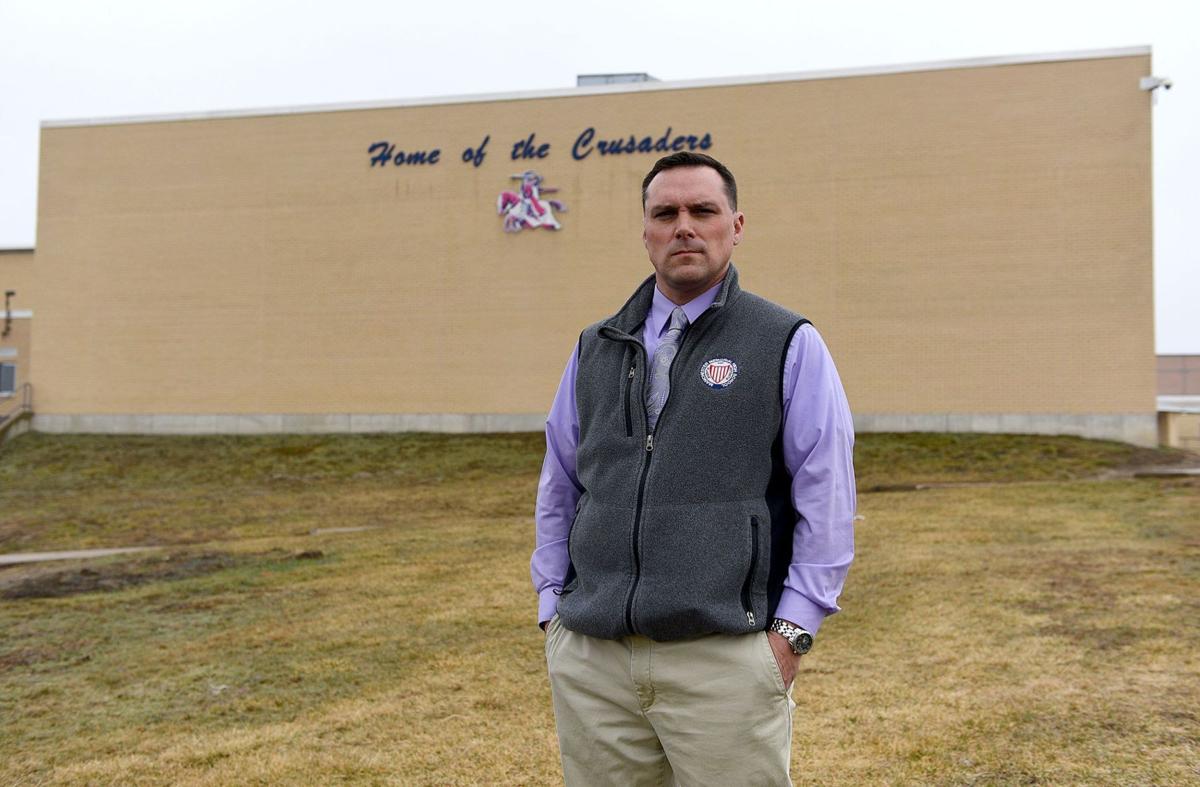 Ray Connolly speaks to a reporter outside Manchester Memorial High School on Thursday.

DOES RAY CONNOLLY deserve an apology?

Certainly his union president thinks so. For 1½ years, the Memorial High School social studies teacher has been under a cloud of suspicion.

Shortly after the school year started in 2019, school district officials fired Connolly from his part-time position as Memorial athletic coordinator.

They acted in the face of a police investigation, a new get-tough policy on team fundraising, and an auditor revealing sloppy if not unethical fundraising practices in athletics.

No one accused Connolly of stealing money, but no one said he didn’t either. So people put 2 and 2 together and the equation added up to Connolly = thief.

Connolly fought the only way he could; his union grieved his dismissal through the formal process. And last November, a judge-like arbitrator found he did no wrong and ordered the district to return Connolly to his duties next year and reward him back pay.

In a blistering 14-page decision, the arbitrator portrayed a school district intent on scapegoating Connolly. 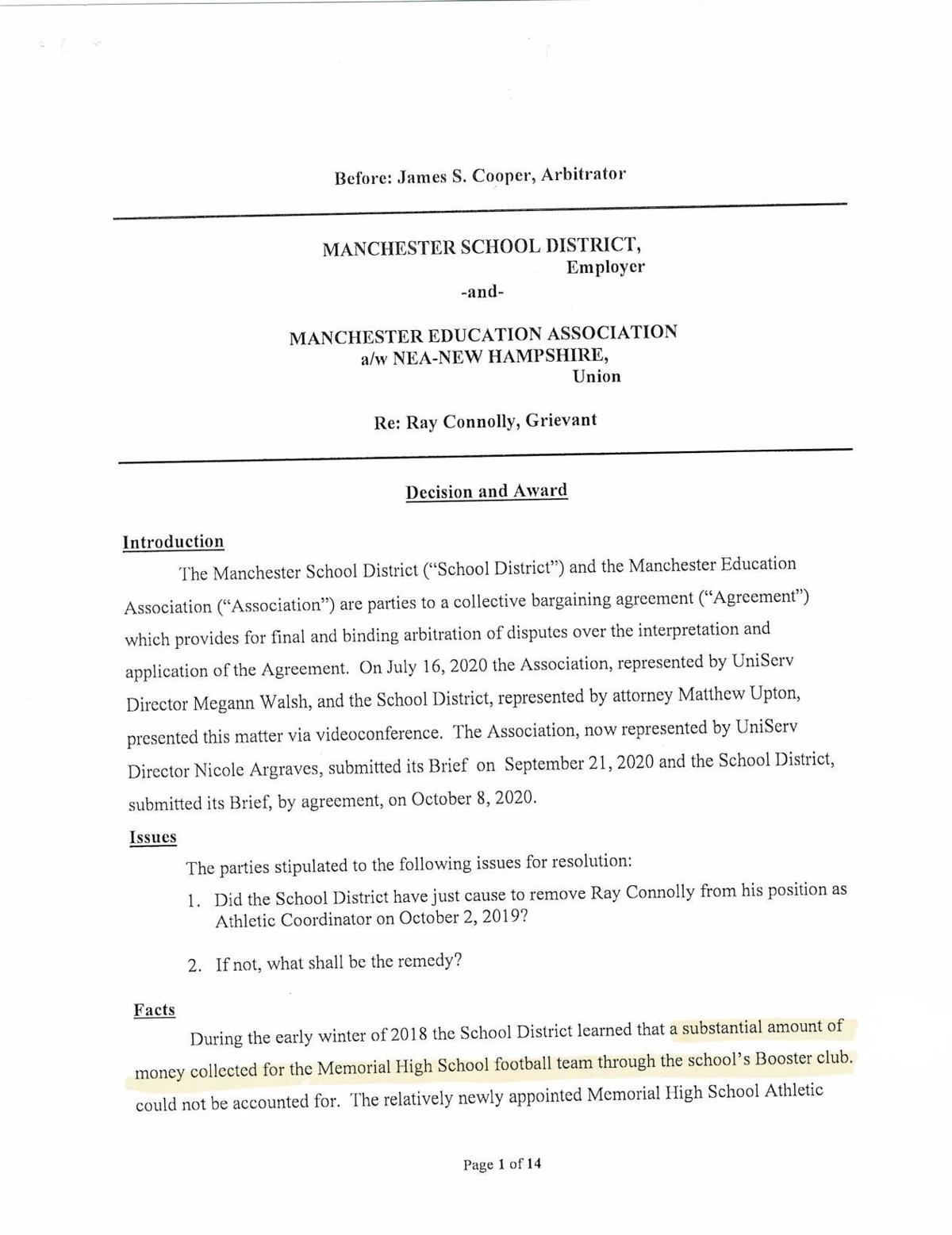 The school district fired Connolly because he knew about and helped an unapproved fundraiser and failed to properly manage the football coach’s fundraising activities, according to the arbitration.

But arbitrator James Cooper didn’t buy it. He used the phrase “no evidence” six times in summing up the school district’s case against Connolly.

“The first two alleged infractions either did not exist or there was no warning or discipline if such took place,” Cooper wrote. “The third allegation concerning the events of August 2019 was built on suspicion and a fervent desire to punish someone.”

Police seem to be siding with Connolly.

When Manchester police learned I was writing this article, they took the unusual step to email me to stress that Connolly’s termination had nothing to do with their investigation into $11,000 in unaccounted funds.

In fact, according to Cooper’s decision, the investigation started after Connolly alerted former school Superintendent Bolgen Vargas about fundraising problems.

“We’ve asked for an apology and not gotten it. It’s really disappointing,” said Sue Hannan, president of the Manchester Education Association, the union that represents about 1,100 city teachers.

She said the last 1½ years have been difficult for Connolly. He maintained his teaching job of 13 years and would hear students whisper that he stole money they raised for the athletic department, Hannan said.

“It has been very demeaning to Ray, very upsetting,” Hannan said. “The district basically plowed forward, sank their claws into him and said ‘We’re going to blame it on him.’”

Connolly, who has announced he will resign at the end of the school year, did not want to speak on the record, hoping to put the matter behind him and not damage future job prospects.

So does he get an apology?

Not from the school district.

“Manchester School District disagrees with the decision of the arbitrator in the case of the Memorial Athletic Coordinator,” spokesman Andrew Toland wrote in an email.

He faults the auditor for overlooking a critical piece of evidence — Assistant Superintendent Amy Allen had told Connolly he was responsible for making sure all Memorial athletic fundraisers had district approval.

In the arbitration, Cooper noted repeatedly that athletic coordinators have nothing to do with fundraiser approvals, and coaches are supposed to work directly with the principal on approvals. Now-retired Memorial Principal Arthur Adamakos even wrote Allen to say that football coach Rob Sturgis was responsible for an unapproved fundraiser, not Connolly, according to the arbitration.

Mayor Joyce Craig, the chairman of the school board, doesn’t appear to be interested in apologizing. Her chief of staff never responded to an email I sent asking about it.

The vice chairman of the school board, Leslie Want, said: “This is a confidential issue, and I don’t think you have your facts straight,” after I summed up the arbitrator’s ruling. She said she can’t comment, even to iron out my facts.

Nothing from Peter Perich, the school board member who is a retired assistant principal at Memorial.

“I wasn’t part of any of that stuff. That was the last guy at the top, Arthur (Adamakos), so I don’t have an answer,” he said.

According to the arbitration, a forensic auditor hired by the school district examined booster club records and found that $11,000 could not be accounted for.

The auditor also said vendors provided “gifts” — there’s no indication about what the gifts were — to the head coach, who in turn distributed “gifts” to assistant coaches, volunteer coaches and the principal.

Perich said the fundraising scandal took its toll on the Memorial athletic community, but they are now recovering.

Memorial has a new principal. And Toland says the school district will reorganize athletics for the 2021-2022 school year. That will include a more centralized supervision of student fundraising.

Hannan wants another change — how the district investigates complaints of teacher wrongdoing.

“You’re put on paid leave,” she said, “and guilty until proven innocent.”