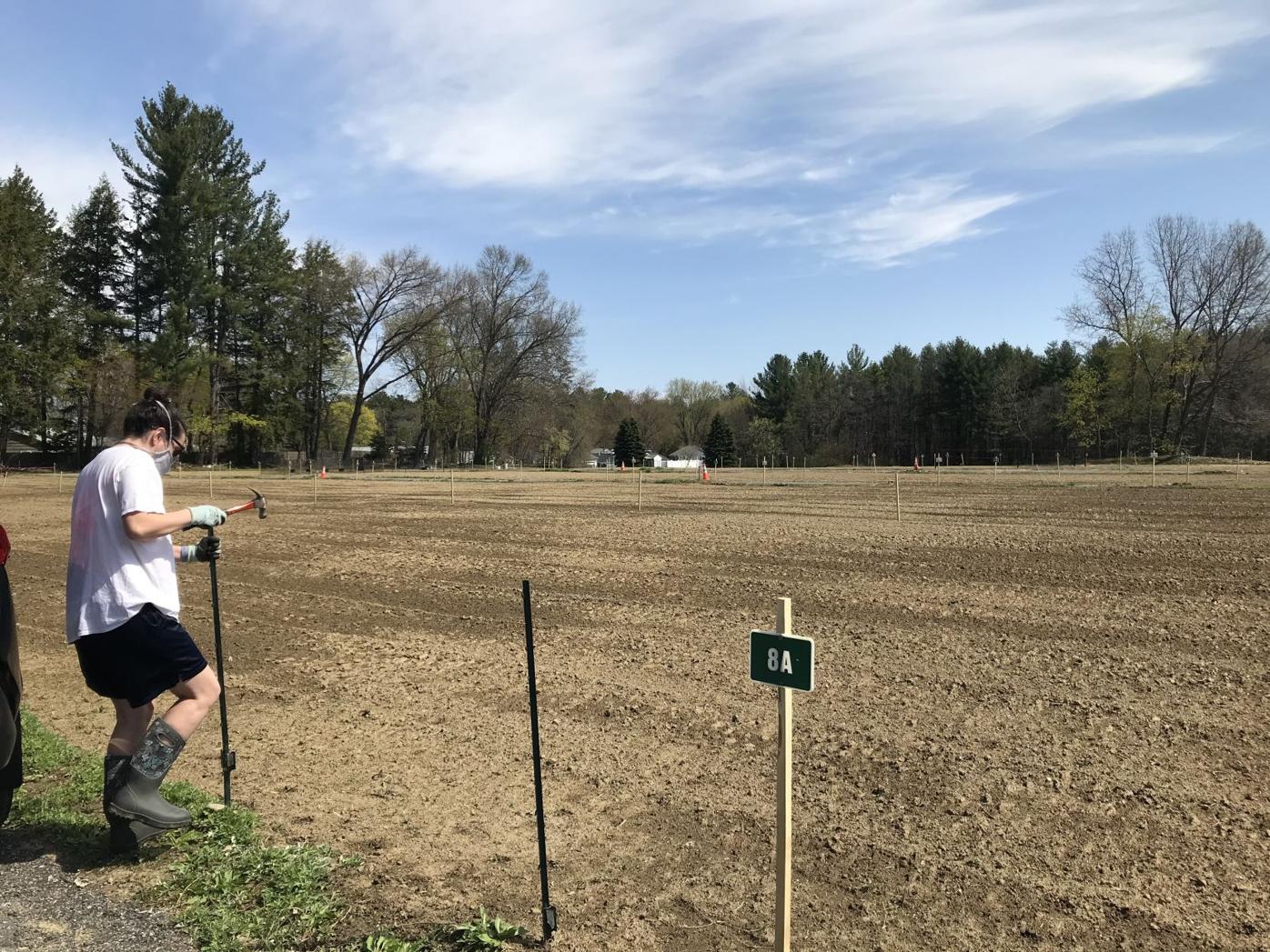 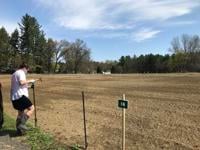 Mary Garces get her fence post in the ground as she readies her plot for planting at the Nashua Victory Garden.s 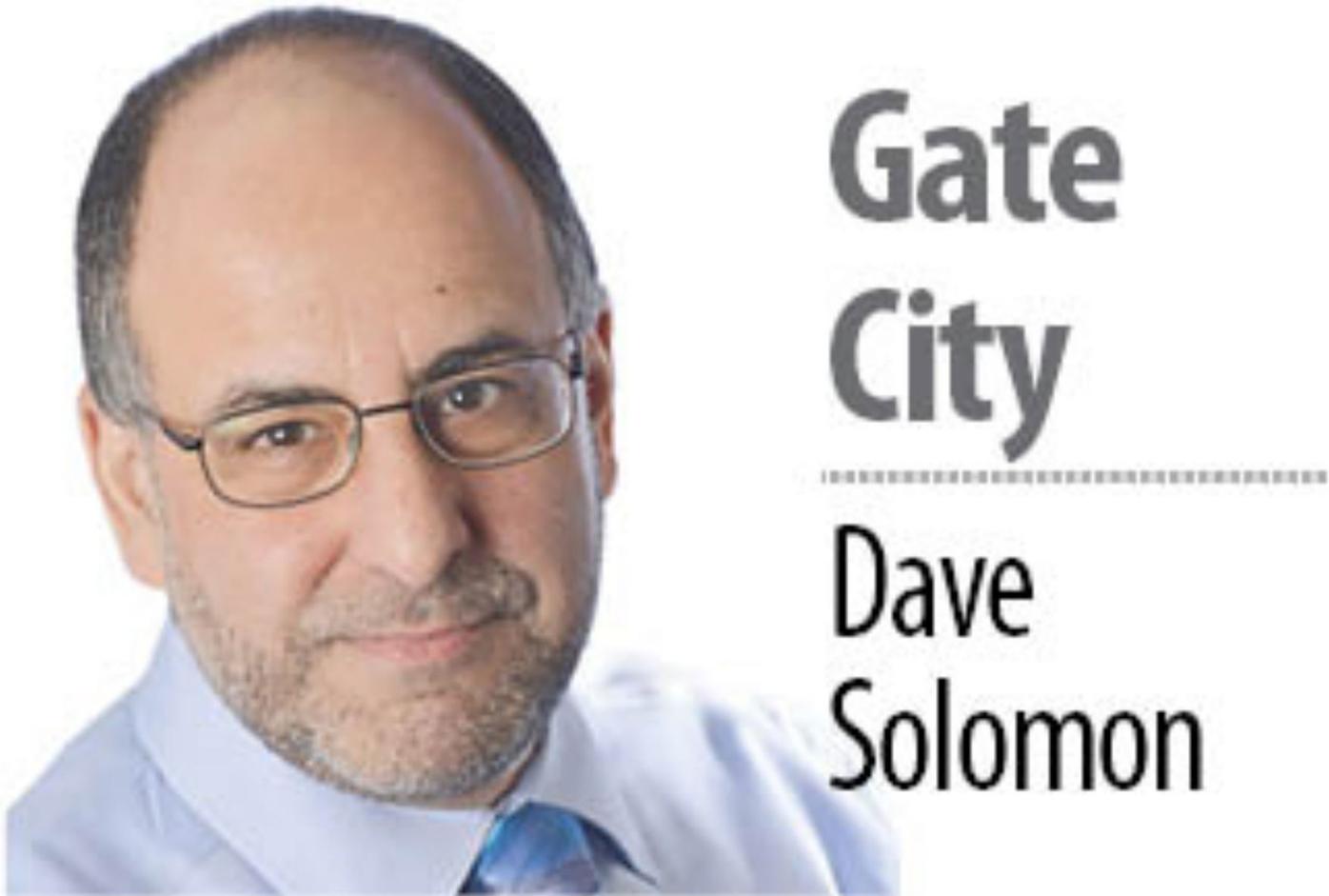 ON A SUN-KISSED Saturday in late April, Greeley Park was humming with activity. Sunbathers reclined in beach chairs on the vast lawn; young soccer players took to the fields with parents on the sidelines; and the first gardeners of the season were at work on the freshly tilled soil at Nashua’s Victory Garden.

The granddaddy of Gate City community gardens, the Victory Garden, like so many others around the country, helped keep food on the table as Americans endured shortages and rationing on the way to victory in World War II.

Today, each of its 50 plots is in high demand, with a two-year waiting list. The person at the top of the list today signed on in December 2019, according to the folks at Parks and Recreation, which coordinates turnover of each 20-by-40-foot patch of earth. COVID-19 only accelerated demand, with 56 people now on the waiting list and an average turnover of 20 plots per year.

In a matter of weeks, the flat, brown acreage will be transformed into a lush, multicolored landscape sprouting every type of produce imaginable, framed by towering sunflowers on all sides. The fencing, signage, weed control and improvised irrigation systems that tap into the water provided by the city reflect the creativity and personalities of the families who plant there.

It’s early in the season, but the city plows had done their work so the field was open to the most eager gardeners anxious to get underway.

Mary Garces, a nurse who works at Dartmouth-Hitchcock in Nashua, is only in her second year at the Victory Garden but has become a big fan. She developed an appreciation for the garden on walks through the property while her two sons played soccer on the field nearby.

“At $30 it’s the best deal in town,” she says. “Last summer with the drought we had to be out here every single day, so it’s a daily thing, but it’s so worth it.”

She manages to keep a fulltime nurse’s schedule and still serve as chief gardener for the family. “It’s mainly me,” she says, “but my in-laws will help and my mom comes down if we go on vacation. You make time for it. I’m a nurse so I can either get up super early and try to get out here or come later when there’s still light. I always feel very safe. There are always people around.”

There’s the immediate reward that comes with being outdoors and getting your hands dirty, then the eventual bounty that makes the effort even more worthwhile.

Community gardening has become increasingly popular across the country in recent years but has really taken off in Nashua, where three other initiatives were launched in the past decade. Along with the Victory Garden, these green spaces create a venue where people are finding common ground in a time of extreme division.

The Gate City Community Garden along the Nashua Heritage Rail Trail, also known as the Pine Street Garden, continues to expand. Since being launched eight years ago, it’s grown to 32 beds.

The Great American Downtown, which manages the Gate City Community Garden, is partnering with Grow Nashua for the 2021 season and is looking for donations to replace some of the original wooden raised beds with more durable metal. You can donate at downtownnashua.org.

GrowNashua, launched five years ago, develops small-plot urban vegetable farms around the city, focusing on families that don’t have the resources for a garden of their own.

For the past four years, the Regenerative Roots Association has been working with volunteers and commercial farmers to develop a variety of community farms programs, including a farm-to-school program and an urban farming initiative. The group started with 4,000-square-feet at Sullivan Farm in 2017, and now farms 2.5 acres at two different sites.

The motto for ReGen Roots, as the group is known, sums up the appeal of community gardening and its dramatic growth in Nashua over the past decade: “Building communities one seed at a time.”

David Solomon was executive editor of the Nashua Telegraph from 2001 to 2011 and a senior staff writer with the New Hampshire Union Leader from 2012 to 2019. His column appears on alternate Thursdays. He can be reached at dave@scdigital.com.