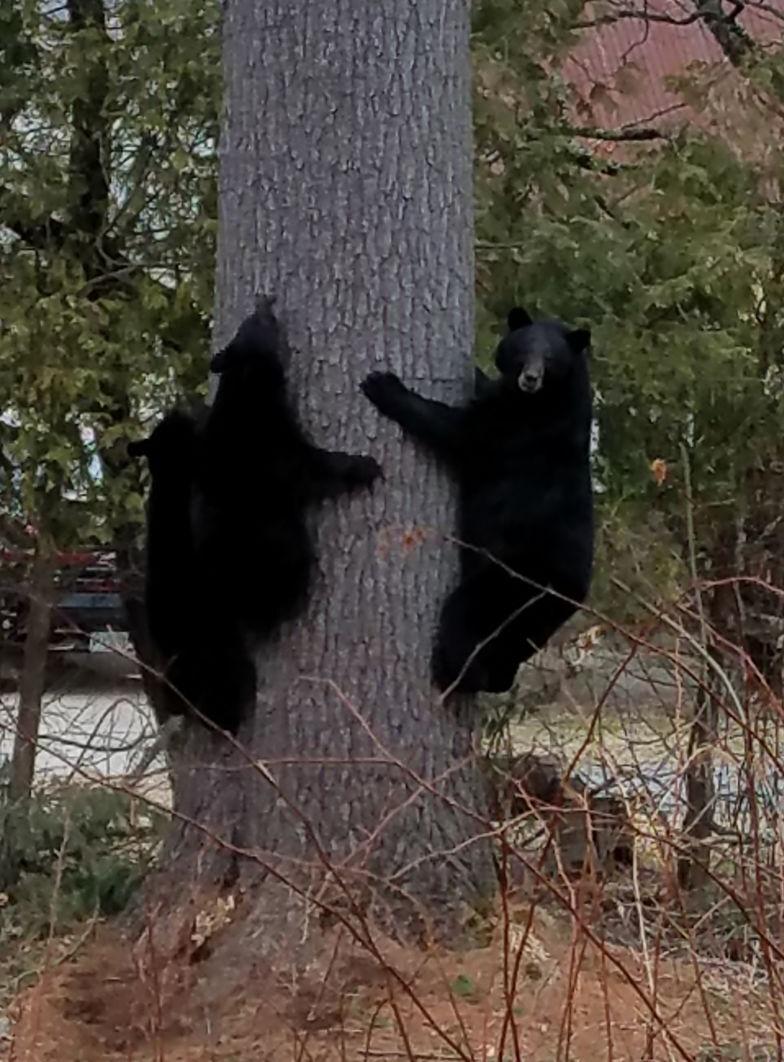 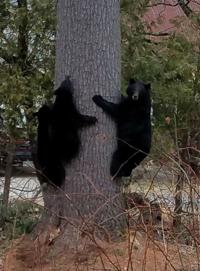 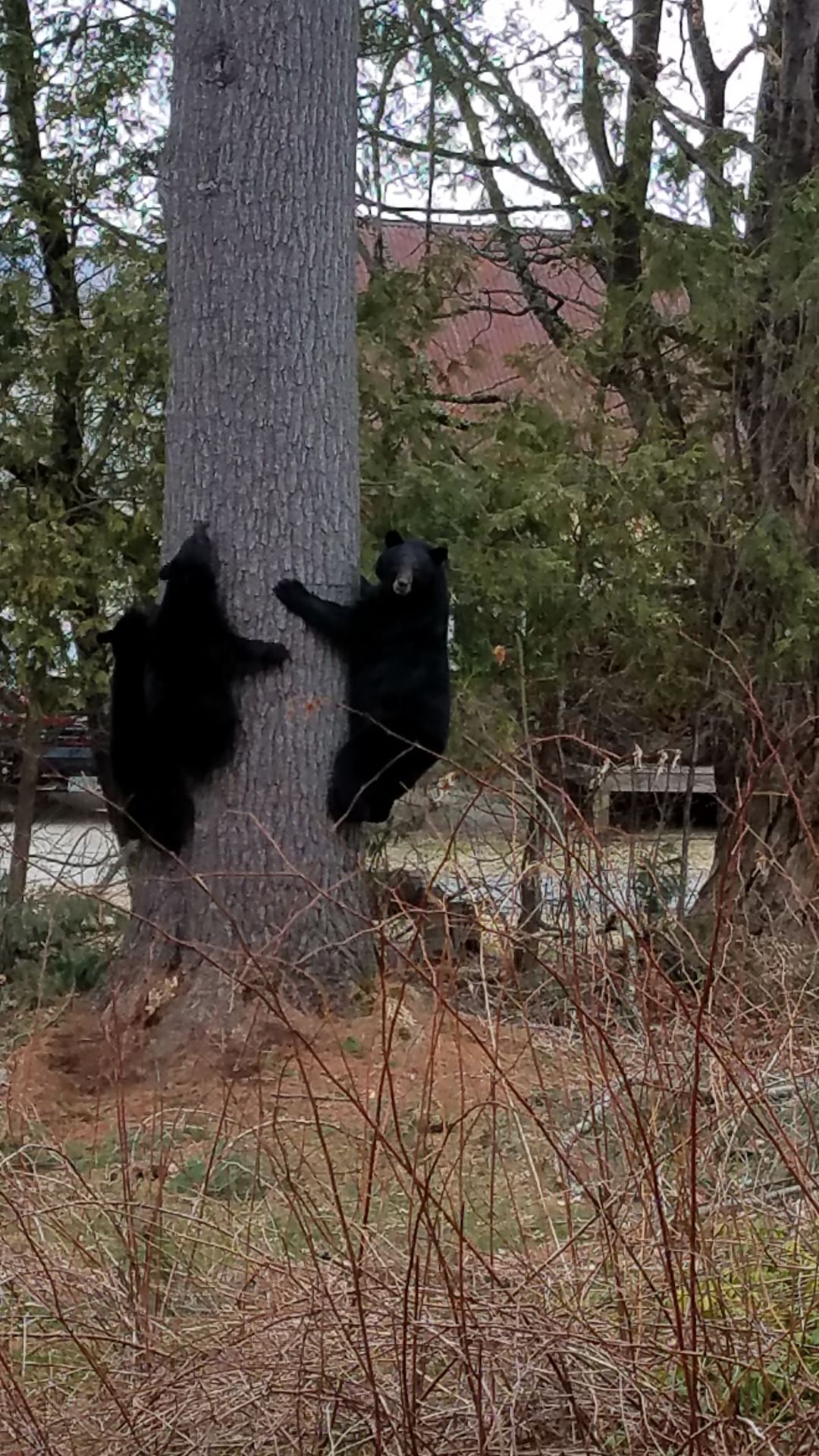 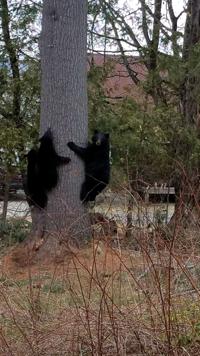 If you’re one of the many people who put up backyard feeders to entice wild birds during this pandemic winter, it’s time.

To take them down.

Black bears are waking up from hibernation right about now. They’re hungry, and those bird feeders offer an irresistible all-you-can-eat buffet.

Andrew Timmins, the black bear project leader for New Hampshire Fish and Game, said it’s been a quieter than normal year so far for bear activity.

But recent spring-like temperatures are sure to bring out the bears — like the mother bear and her four yearling cubs who emerged from their den in a wooded area of Bedford last week, Timmins said. Cubs remain with their mothers for 18 months, he said.

Bears lose about 25% of their body weight over the winter, even more for nursing mothers, Timmins said.

Last year’s acorns and beechnuts are a viable food source for hungry bears, and once spring arrives, their main diet will be green vegetation. But bird seed, Timmins said, is “high-test, any time of year but particularly in the spring.”

That’s why, the biologist said, “It’s critically important that people be responsible. This warm weather is really going to jump-start things, particularly in the southern part of the state.”

This is bear country

Fish and Game used to warn residents to take down bird feeders by April 1, but that deadline “no longer really works,” Timmins said. If you live north of the White Mountains, you might be OK until then, but anywhere south of there, the time is now.

If you’re new to the Granite State, here’s something you should know: “The entire state of New Hampshire is considered bear country,” Timmins said. “Don’t think if you live in the southern part of the state that this doesn’t apply to you.”

More people have been coming to New Hampshire for outdoor recreation during the pandemic. “And the only concern there is more people, more attractants means more chance of conflict” with bears and other wildlife, Timmins said.

The past year also saw an increase in the number of people raising chickens here. Bears love chickens.

“If you’re going to have free range birds, you absolutely have to be willing to accept loss,” Timmins said. “There’s simply no way to keep a bear, bobcat, fisher, coyote or fox from grabbing chickens.”

Many people keep their chickens in pens or coops, but those are often not bear-resistant, he said. “That’s where we see the biggest losses,” he said. “A bear can come through a pen and the chickens are all cornered.”

There is a solution. “You can very successfully raise chickens in New Hampshire, but you have to be willing to invest in electric fencing,” Timmins said. “It doesn’t take long to educate a bear what a fence means.”

Fish and Game actually loans out electric fence equipment to show folks how it works, he said.

Back to those bird feeders: Can’t you just take them down at night, when bears tend to be more active, and put them back up during the day? That’s not ideal, Timmins said.

“One, there’s going to be spilled seed under there that’s going to be available at night,” he said. “And because bears are intelligent, they’re simply going to realize, hey, I’ve just got to start coming here during the day.”

Bird feeders are not the main food source for birds that spend the winter in New Hampshire, but they do provide supplemental food, according to Rebecca Suomala, a biologist at NH Audubon.

“It may mean that birds survive a severe weather event better because they’ve got a little bit more fat from that supplemental food,” she said. And they may come through winter in better condition for breeding.

There are ways to avoid attracting bears and still feed the birds in springtime, Suomala said, such as scattering food around shrubs, hanging feeders too high for bears to reach, or even putting up electric fencing around the feedersIf you really want to help the birds, she recommends planting shrubs and trees that bear fruit in the wintertime. And don’t remove that leaf litter; it contains insects and seeds that birds can eat.

“Messy yards are good for birds,” she said.

It was a good winter for birdwatching, Suomala said, with lots of reports of bluebirds and robins.

And there were great “irruptives” — “birds that are oftentimes farther north, but when food supplies are poor in the north, they come south,” she said. Pine grosbeaks, common redpolls, pine siskins and red-breasted nuthatches all joined the more common chickadees and woodpeckers at feeders.

Suomala understands why so many folks have been drawn to the birds during the pandemic. “I think that people realize how valuable the natural environment is, and the creatures in it, to our own well-being, whether it is physical or mental,” she said.

Fish and Game’s Timmins said what impresses him about black bears is their ability to adjust to a variety of habitats. “We’re really changing this landscape in New Hampshire. It’s getting much more developed,” he said. “But bears, they’re able to respond and they’re very adaptable.

People don’t need to live in fear of black bears, Timmins said. “They just need to be cognizant that if they have food attractants in their yard such as bird feeders or accessible garbage or unsecured poultry, they could attract bears.”

That’s not good for the bears, even if you don’t personally mind having them as neighbors.

“You’re instilling behavior into that animal,” Timmins said. “Eventually that bear’s going to walk into somebody’s yard that has no tolerance, and it’s going to get the bear killed.