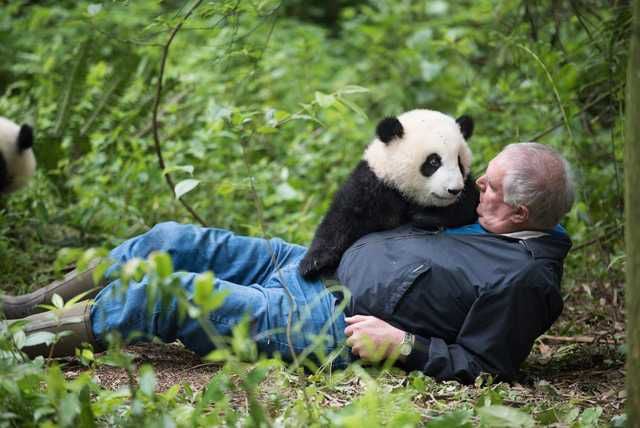 Ben Kilham, known for his work with black bears in the Granite State, is shown in a scene from a new IMAX 3D film, “Pandas,” which features his work with pandas in China. The film will open in April. 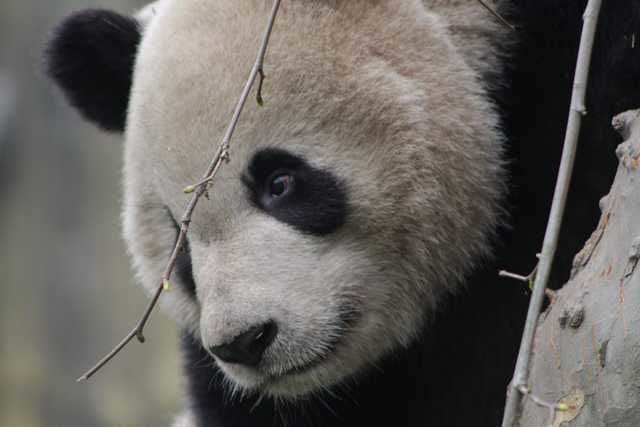 Ben Kilham's work in New Hampshire with black bears is playing a key role in a Chinese project to return captive-born pandas to the wild. 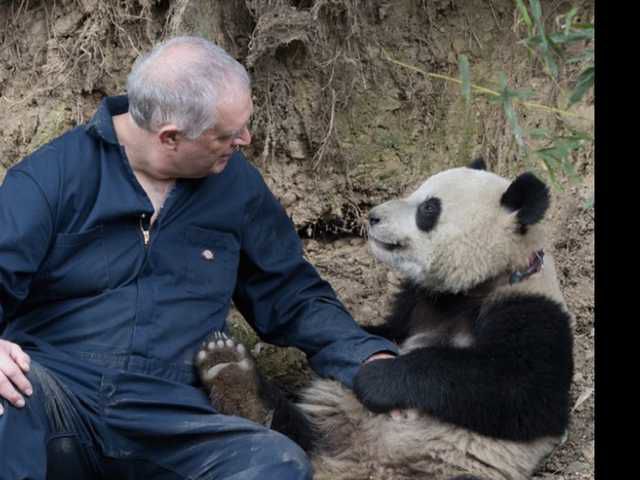 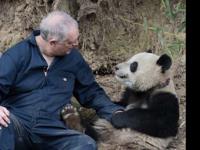 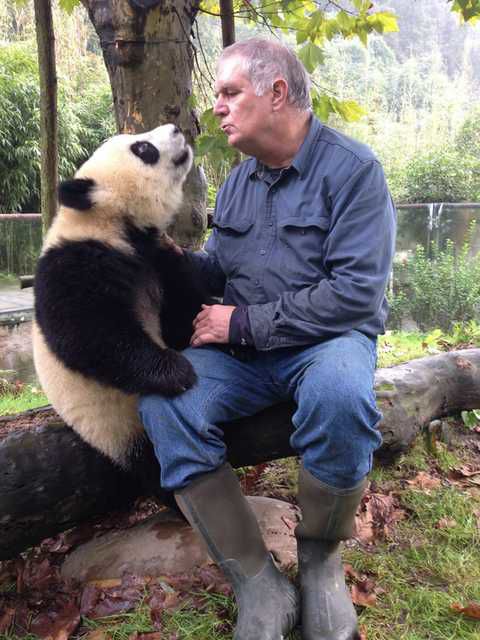 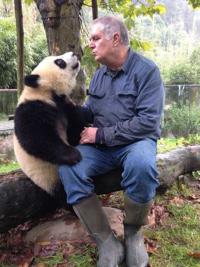 Ben Kilham is best known for his work with black bears. Now his expertise has been tapped by researchers in China who want to return captive-born pandas to the wild. A new film, “Pandas,” features Kilham's work with a panda named Qian Qian, pictured. 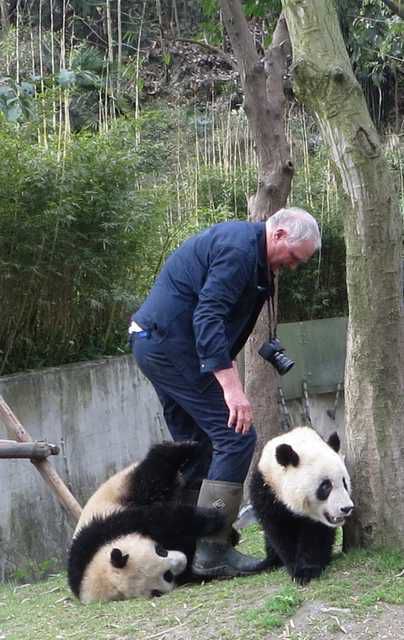 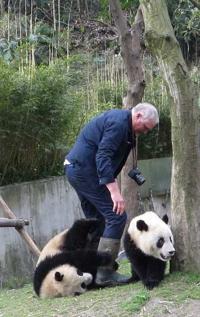 Lyme naturalist Ben Kilham interacts with panda cubs at the Chengdu Research Base of Giant Panda Breeding in China.

Ben Kilham, known for his work with black bears in the Granite State, is shown in a scene from a new IMAX 3D film, “Pandas,” which features his work with pandas in China. The film will open in April.

Ben Kilham's work in New Hampshire with black bears is playing a key role in a Chinese project to return captive-born pandas to the wild.

Ben Kilham is best known for his work with black bears. Now his expertise has been tapped by researchers in China who want to return captive-born pandas to the wild. A new film, “Pandas,” features Kilham's work with a panda named Qian Qian, pictured.

Lyme naturalist Ben Kilham interacts with panda cubs at the Chengdu Research Base of Giant Panda Breeding in China.

Ben Kilham is about to become a big movie star.

"Pandas," an IMAX 3D film coming this spring, features an extraordinary partnership between Kilham, a Lyme naturalist, and Chinese researchers, who are relying on his expertise to reintroduce rare giant pandas to the wild.

Kilham is renowned for his work with New Hampshire black bears. He's the author of several books, and his groundbreaking efforts to raise orphaned bear cubs and return them to the woods have been featured in documentaries on the National Geographic and Discovery channels.

In recent years, Kilham also has been working with Global Cause Foundation, a Virginia-based nonprofit that supports the Chinese panda research project. "We're using the methods that I used with black bears that had no experience in the wild," Kilham explained in a phone interview.

The new "Pandas" movie, which chronicles these efforts, opens at the Simons IMAX Theatre at the New England Aquarium in Boston in April.

Early in the film, directed by Drew Fellman, Kilham is seen walking in the woods with his black bear cubs and bottle-feeding baby bears. "There are lots of shots of New Hampshire," he said. "I'm sure it will be great for tourism in the state."

It all started a decade ago, when Kilham gave a presentation about his work with black bears for researchers at the Chengdu Research Base of Giant Panda Breeding, which has been raising giant pandas in captivity for generations.

He got their attention.

But things can move slowly in China, so it wasn't until four years later that Kilham got another invitation from researchers there. They had questions, he said.

"They were nervous about walking their cubs untethered, as I did the black bears, for fear the cubs would run off," he recalled. "They also were nervous, if they got a bear in the wild, that the wild pandas would come down and attack them.

"So we invited them to come to New Hampshire."

Kilham has had phenomenal success over the years raising motherless black bear cubs to be self-sufficient, wild bears. His greatest success has been with a bear named Squirty. "She came to me as a 3-pound cub that was 7 weeks old," he said.

Squirty is now 22 and is denned up with her 11th litter of cubs. But she always recognizes the man who raised her. "She comes up to me and I still can change her (radio) collar without sedating her."

John Spotila, president of Global Cause Foundation, said the greatest challenge in restoring the giant panda has been figuring out how to reintroduce captive-born bears to the wild, he said. "There's so little known about what wild pandas do because they're solitary and hard to follow," he said.

When Hou Rong, a researcher from the Chengdu base, came to New Hampshire in June of 2012, Kilham was caring for 30 cubs, including six bottle-fed babies. Watching him stroll in the woods with his bears was "a pivotal moment" for the visitors, Spotila said.

Now they hope that Kilham's method of raising bear cubs in a natural but protected setting will save pandas too, he said. "And then once we release them into the wild, to be able to maintain a connection because of this unique bond that develops between the scientist who raised the cub and the panda that's now in the wild."

There are only about 1,800 wild pandas left in the world; the black bear population in New Hampshire alone is between 5,000 and 6,000, Kilham said. And while the giant panda was recently moved from "endangered" to "vulnerable" status, he said, "They're not out of the woods yet."

Chengdu Research Base, which is in southwest China's Sichuan Province, has about 125 captive pandas and is open to the public. With Kilham's guidance, they've built a second facility with large outdoor enclosures for the pandas to get acclimated to living in a natural environment.

Spotila said the most rewarding thing for him is seeing "how a young panda cub, when put in this protected setting in the wild, blossoms into an energetic, curious, sort of fun-loving cub," he said. "Instead of a couch potato sitting in the corner."

"It's like a kid that's always been locked up in his bedroom suddenly getting to go out and play."

Kilham tapped two post-doctoral researchers from Drexel University to work full time with the pandas in China. He's made numerous trips there himself and discovered that pandas react much like his black bears.

"They respond to human emotions," he said. "So if you're scared of them, they'll be scared of you."

There are differences, however. Unlike black bears, pandas don't store fat or hibernate. And they eat a low-quality diet, primarily bamboo, Kilham said. "They have to eat for hours to get enough food to sustain themselves."

Black bears eat a variety of foods and "have tons of energy," Kilham said. "They can wrestle with you all day long and never tire. Black bears can jump from tree to tree; they're very athletic."

Pandas? Not so much.

"They have to think about their use of energy," he said. "If you're standing five feet from a panda, it might come over and want to wrestle with you. But if you're standing 10 feet away, it will calculate that's too much energy."

Early on, the Chinese researchers complained that their pandas seemed to prefer one of the post-docs, Jake Owens, to them. It turned out to be a cultural difference, Kilham said.

Until recently, he said, people in China did not have pets. "We had to explain to them they had to treat the pandas ... like they were another being; they couldn't treat them like objects," he said. "As soon as they did that, the pandas started responding to them."

Kilham, who currently is caring for 16 black bear cubs born last winter, is in the process of starting his own nonprofit, Kilham Bear Center. He hopes the new film will generate support for his work here at home.

And he's proud that New Hampshire bears are helping to save animals a world away. "Even though I work with the most common of all bears," he said, "the work that I've done is valuable for the most endangered of all bears."