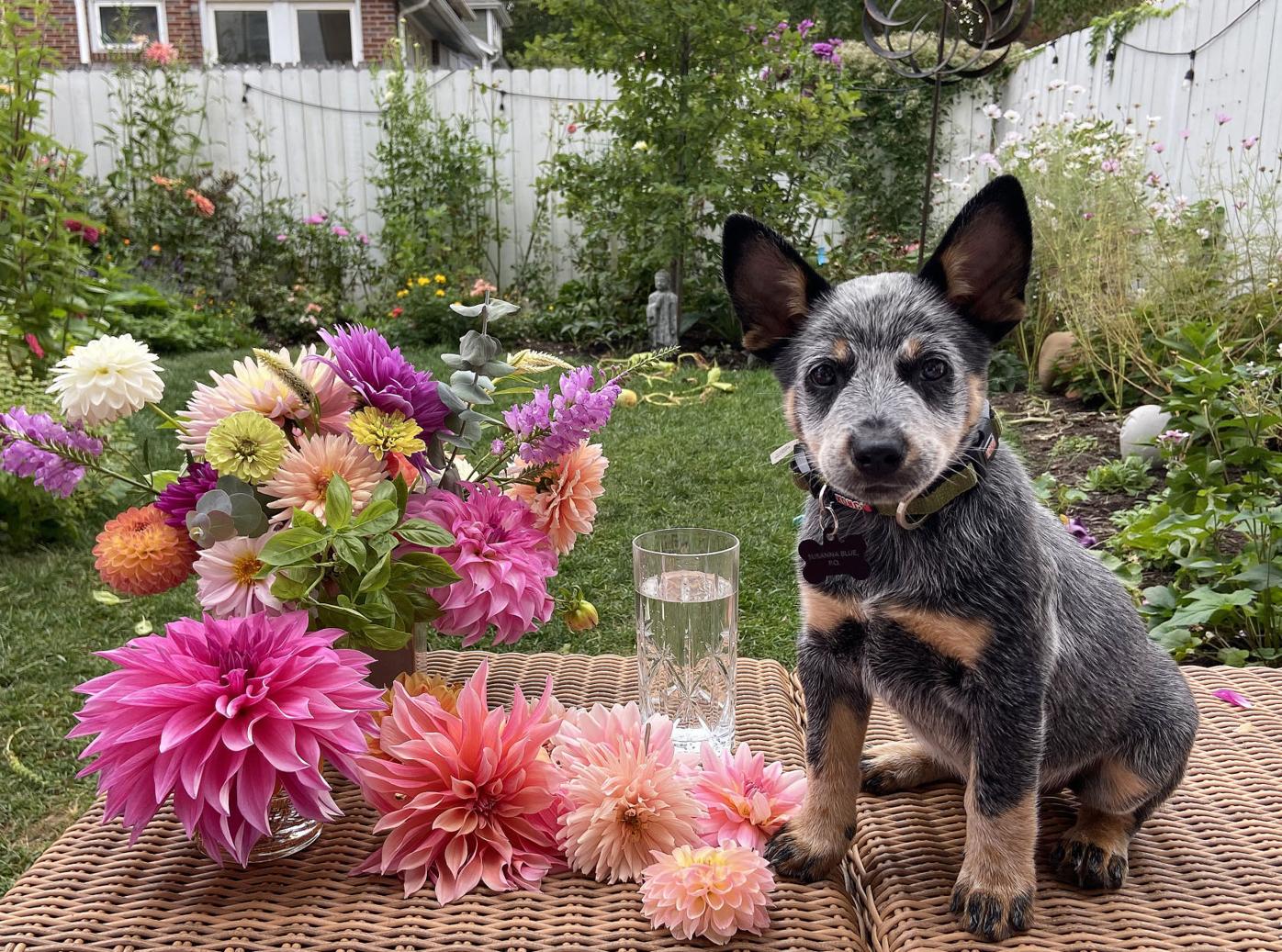 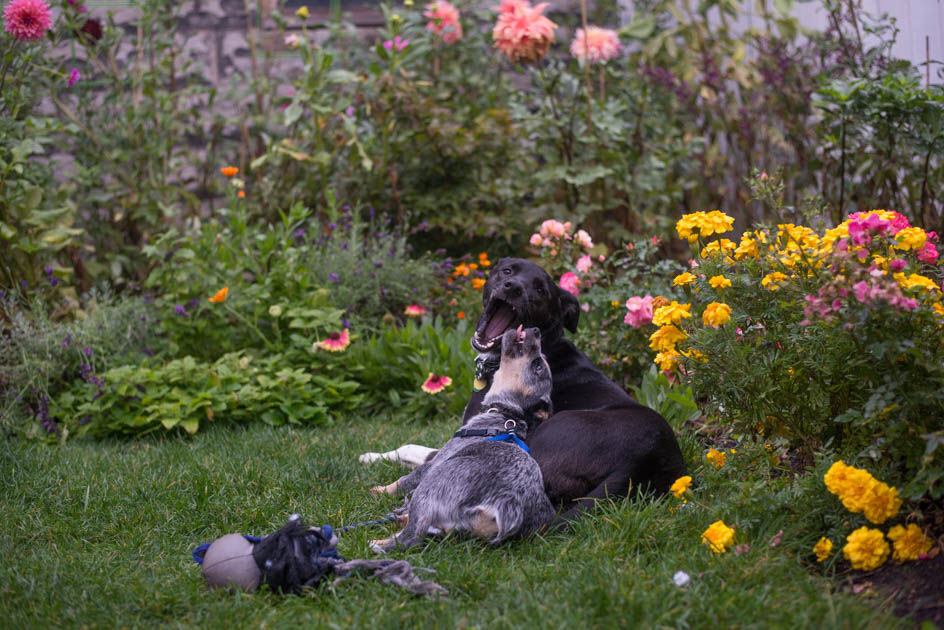 I parked my car in my girlfriend's driveway. We were returning from the park that Sunday in November, and Bob, my 3-year-old border collie mix, bounced around the back seat, trying to avoid Suzy, our rambunctious 5-month-old Australian cattle dog, who had a habit of biting his neck and legs.

My girlfriend exited the car first and, as I got out, she opened a back door. Bob jumped out and raced toward the backyard. Suzy, a blue heeler who had big, pointed ears, a stumped tail and a white face, normally followed Bob. If she didn't chase him, she was easy to grab, thanks to a seven-foot-long leash.

But we didn't have the leash that morning. Earlier, when we were in the kitchen getting ready to leave, my girlfriend said the leash was on the third floor. Sensing an imminent departure, the dogs sprinted around us, barking and crashing into furniture. Frustrated, I picked up Suzy and said, "I'll just carry her. Let's go."

I remembered to keep Suzy in my arms getting in and out of the car at the off-leash park, but when we returned to my girlfriend's house in Pittsburgh's East End, it had slipped my mind. Without a leash, Suzy zipped past us. But instead of following Bob, she ran into the street.

What happened next - the blur of a black SUV and Suzy's cry as she died - is seared into our memories.

Grieving the loss of a pet is often as painful as mourning a close friend or relative. But being responsible for and witnessing your pet's death can add guilt, trauma and shame to the heartbreak. And as we discovered after Suzy died, this emotional toll impedes the grieving process.

The pet industry has begun to help people mourn. Veterinary social work is a growing profession, and pet bereavement groups have become common. Cheri Barton Ross, an adjunct psychology professor at Santa Rosa Junior College, is a pioneer in the field. After a few one-on-one sessions with pet owners through her husband's veterinary office in California, she started hosting pet loss support groups in 1986 because she realized groups work better because they allow people to see they aren't alone.

"People often felt embarrassed and isolated in their grief for a pet," she said. "However deep those bonds go for whatever it is that you loved, that's how deeply you're often going to grieve." She also said people can develop post-traumatic stress disorder from witnessing their pet accidentally die. "With couples or families, you either pull apart or pull together in this crisis," said Ross, co-author of "Pet Loss and Human Emotion." "You might blame each other or blame yourself and not be able to navigate different stages of grief."

My girlfriend and I each blamed ourselves for the death of our first shared pet. We had gotten Suzy because we had time, while working from home during the pandemic, to raise a puppy together. Talking through what happened helped ease the grief and brought us closer. However, she initiated the conversations, and I only participated reluctantly. After eight years of therapy, I know articulating emotions is important, but part of me falsely believed that not talking about the accident would take my mind off the image of Suzy's lifeless body and make the pain go away faster.

My upbringing enhanced my reluctance. When I was a boy in suburban Pittsburgh, my dad competed in dogsled races, and our family had a kennel of huskies along the driveway of our six-car garage. A few of our pets died tragically, most notably our wolf, but we never talked about it. The family motto was, "It's over; move on." So, whenever my girlfriend brought up Suzy, I had to check my impulse to regurgitate my dad's response. And then I'd tell the truth: "I replay her getting run over in my head every day."

Walking past the accident site often triggered a flashback. Ross said this is so common that she's had clients who moved to escape the bad memories. People also avoid certain roads. Kevin Nicholson, a 41-year-old cybersecurity information engineer I met in a pet loss group page on Facebook, told me over the phone that he hasn't turned left out of his Long Island street since early March, because that's where Lulu, his family's 1-year-old cavapoo, slid out of her harness during a walk, ran into traffic and died.

Paweenudh Suanpan stopped driving on a section of Route 108 in Maryland after a teenage driver crashed into her car there in 2017. Piper, Suanpan's chocolate Labrador retriever who was in the back seat, was thrown so forcefully that she was paralyzed and had to be euthanized. "I need to return there and close the loop," said Suanpan, 34, "but I just haven't yet."

Suanpan, a special-education teacher who has become an advocate for dog safety belts, said she still blames herself for not securing Piper, just as my girlfriend still beats herself up for opening the car door and I can't forgive myself for not running upstairs to get that leash.

"Every single person blames themselves," said Dani McVety, a veterinarian who co-founded Lap of Love Veterinary Hospice, an in-home end-of-life care provider that also hosts pet loss support meetings online. "Whether you had an accident or come home to find that your 15-year-old dog passed away naturally, there's always guilt." Owners might blame themselves for not realizing sooner that their pet was sick, she added, or for knowing they were sick but waiting too long to euthanize.

Deciding when to euthanize is fraught.Kristeen McPherson, an accountant I also met through a pet loss group page on Facebook, and her husband euthanized Carly, their 12-year-old golden retriever, after surgery and chemotherapy couldn't keep the dog's cancer at bay. McPherson, a 60-year-old Harrisburg, Pa., resident, said she feels guilty despite the medical interventions, because, "If it were me, I hope they wouldn't put me down and just keep trying and trying."

McPherson said their dog was more of a family member than a pet. Describing a pet like this has become the norm, and it's a fundamental shift from how they were treated a generation ago. The pet industry, which rakes in more than $100 billion each year, has dubbed it the humanization of pets.

Debbie Stoewen, a veterinarian who became a social worker in 2005 to help pet owners grieve, said the evolution of the human-animal bond can also be seen in how many pets today sleep in their owner's beds and are referred to as furbabies. "The emotionality of pet owners, who we now call pet parents, is so deep and complex," said Stoewen, who lives in Ontario, Canada. "This heightened bond amplifies the grief."

My girlfriend and I grieved differently. She told her close friends and family privately, and the more she talked, the better she felt. My shame ran so deep that I wanted to get another Australian cattle dog with a stumped tail, name her Suzy and never tell anyone. As a childless 40-year-old, part of my identity was tied to being a dog owner, and I was terrified people would think I wasn't a good one.

After talking to my therapist, I finally opened up to people. But the shame didn't recede until I joined a private Facebook group dedicated to grieving for dead dogs and realized how many other people had lost pets to car accidents.

Lindsey A. Wolko, founder of the Center for Pet Safety, wrote in an email that there are no official statistics tracking how many dogs are killed by cars each year. But it happens so frequently that emergency veterinarians have a term for it - HBC (hit by car). McVety, who worked in an emergency veterinarian hospital in Florida at the start of her career in the mid-2000s, said that she sometimes saw five HBCs a night. The term also applies to cats; McVety said that they, like dogs, are often accidentally run over by their owners in the driveway.

Stoewen, the veterinarian/social worker who is the director of veterinary services for Pet Plus Us, a pet health insurance company in Canada, said she can relate to what I've gone through. One morning 20 years ago, one of her dogs escaped her yard and was run over. The experience helped her become a better veterinarian and dog owner, she said. "The way you lost that pet is part of you, like an imprint. With your next dog, you're going to be that much more careful and intentional."

There is no right or wrong time to adopt a new dog, according to Ross, the psychology professor. She said her only advice is to make sure the new dog is not a replacement for the one that died: "No matter what, you're going to grieve that loss."

My girlfriend and I learned this lesson, too. A few days after Suzy died, we got another Australian cattle dog because a breeder had an available puppy, and we wanted an immediate shot at redemption. It wasn't easy. Until we worked through our trauma, playing with the new puppy, who we named Isabelle, made us feel even guiltier about Suzy, and we experienced anxiety while walking her on a busy street or getting her out of the car.

Bob, my border collie mix, probably wishes we had waited longer. Like Suzy, Isabelle is a natural herder and constant nipper.