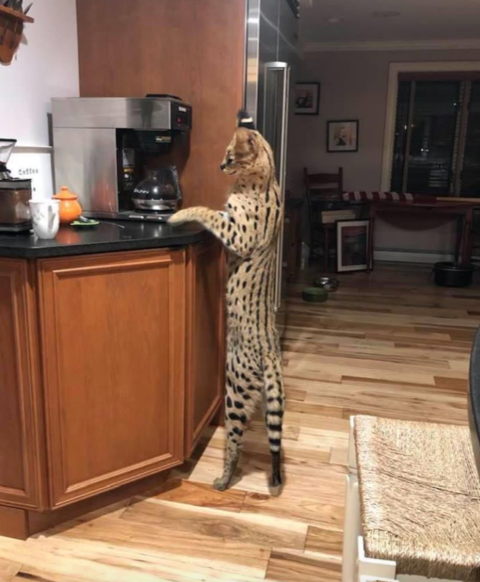 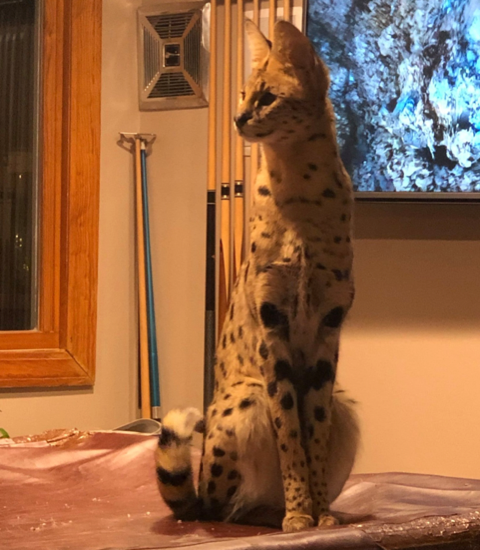 This 40-pound, 4-year-old neutered male African serval cat that ran away from its Merrimack home Wednesday night has been reunited with its owners.

This 40-pound, 4-year-old neutered male African serval cat that ran away from its Merrimack home Wednesday night has been reunited with its owners.

Live chickens are being used to tempt back home a 40-pound African serval cat that escaped from its owner’s home in Merrimack on Wednesday night.

Spartacus ran out of a house on Peaslee Road when the homeowner opened the front door to let the family dog inside, according to police.

“The cat has never gotten out before, from what I know,” Haylie Gulino, animal control officer for the Merrimack Police Department, said Thursday.

She said the cat’s owners are devastated, and are hopeful that Spartacus will return home safely.

Gulino said Spartacus is legally owned, with the required Fish and Game Department permits. The 4-year-old neutered male is domesticated, but skittish. She described him as an “indoor cat.”

“It typically would come to you if you call it, but I wouldn’t necessarily try to do that,” she said.

Even though the cat is domesticated and lives in the same household as a dog, she said exotic animals can be unpredictable if approached by strangers. Spartacus still has his claws, she said.

Police have set up a humane trap in the homeowner’s yard with live chickens as bait. Gulino said the cat will be unable to reach the chickens if it does enter the cage.

In an effort to keep everyone safe, Gulino suggested that if anyone sees Spartacus, they should keep their eyes on the animal while calling the local police department at 424-3774 to report its location. Police can then arrive to set up another humane trap, she said.

“This is not very common,” Gulino said of having a wild cat roaming the town of Merrimack instead of an African savanna. “The owner has had some exotic animals in the past, but none that I have dealt with.”

According to the African Wildlife Foundation website, serval cats have spotted coats that are sometimes marketed as young leopards or cheetahs, “and can attract a hearty price on the black market.”

Gulino said she does not expect local hunters to mistake the large cat for a deer, adding she is hopeful that hunters will realize it is an exotic pet.

The missing exotic house cat from Merrimack is safe at home.

Our sometimes-incredible fall hawk migration not long ago surged through Massachusetts like clockwork between September 12 and September 20 every year. In a span of 10 days, 90% of the entire North American population of broad-winged hawks typically would begin evacuating the continent on th…

Hope is fading that a third cub born to Mink the Bear in January will be rescued after one of her cubs was hit by a car and killed on Route 10 in West Lebanon.

Work has begun on an expansion project at the New Hampshire Society for the Prevention of Cruelty to Animals in Stratham that will include renovations, a veterinary wellness clinic, new barn and other improvements.

Lying about test scores, talent and even race to get a prized college admission

Lying about test scores, talent and even race to get a prized college admission