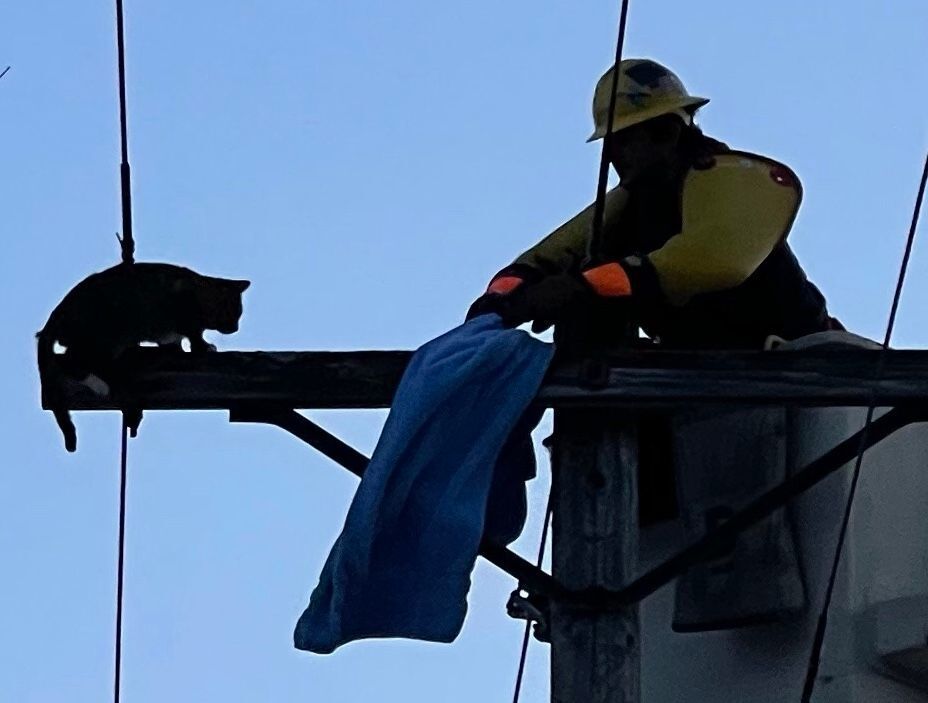 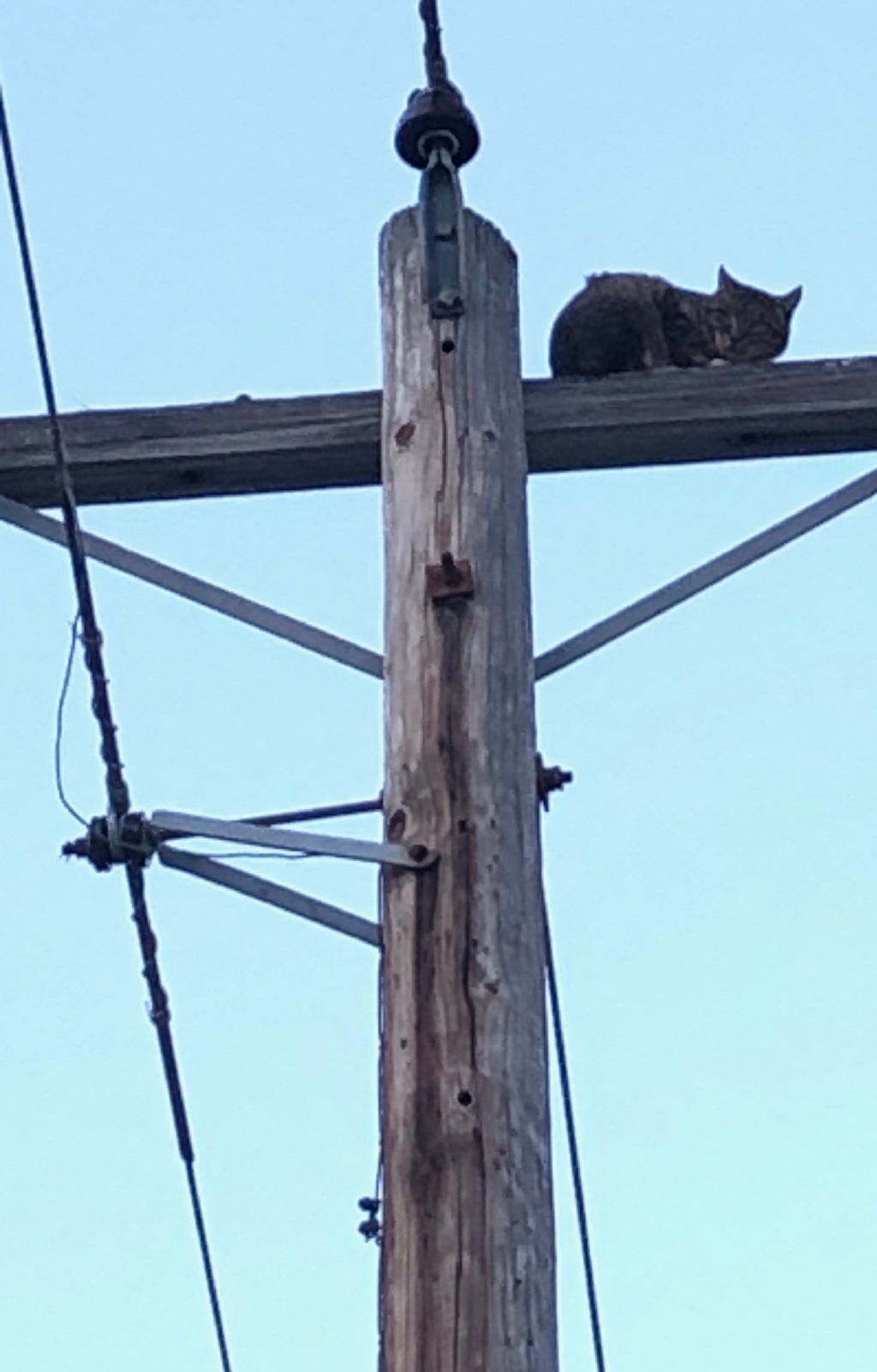 Line crews from New Hampshire Electric Co-op responded to Blake Road in Epping Thursday afternoon after this cat was found atop a utility pole.

Line crews from New Hampshire Electric Co-op responded to Blake Road in Epping Thursday afternoon after this cat was found atop a utility pole.

A feline-friendly utility crew briefly cut power to more than 700 customers in the Epping area Thursday afternoon as line workers attempted to rescue a cat cozied up on a pole.

The power was cut to prevent injuries and damage to the system.

The ordeal on Blake Road became quite the public spectacle with residents and passersby watching as one crew from New Hampshire Electric Co-op was stationed at the utility pole and another was sent to a nearby substation.

Company spokesman Seth Wheeler said the cat had been sitting atop the 35-foot pole for some time before people began to notice, became concerned, and then sent photos and made calls to make the utility aware Thursday afternoon.

Realizing the potential danger to the cat and possible disruption to the lines from its presence on the pole, the line crews responded with plans to fetch the feline and carry it to safety.

Line worker John Gerace, who is based in the company’s Raymond district, rode up in a bucket and got close enough to reach out to the cat, but it got spooked and jumped to a branch on a nearby tree.

“He hopped out of the tree and ran off into the woods and that was it. Off the cat went, uninjured apparently. People who had been watching didn’t know whose cat it belonged to. I don’t think it was a neighborhood cat,” Wheeler said.

John Sigmund, who lives near the pole, was one of the residents who witnessed the ordeal.

He said a neighbor and her young daughter were on their way home from school around 2:15 p.m. when they first spotted the cat, which was described as a short-haired black and brown tabby with a white bib and paws.

“We were all worried what would happen if the cat got scared and touched the line,” he said.

Sigmund said that once the utility company was called the crew quickly showed up and considered the best way to bring the cat down safely.

He watched along with others as Gerace tried to grab the cat from the bucket.

“My tree was close enough that the cat decided to make a jump for it. There were so many branches that the cat struggled to cling to a branch and kind of dropped branch to branch. The second crew member actually helped to break its fall,” he recalled.

The cat landed on its feet and ran across the road.

“I was happy the cat got down safely and it looked fine running away,” Sigmund said.

She lives next to Sigmund and learned about the cat when he pointed up and asked if she was missing one.

Rumery, whose own cat disappeared a couple of years ago, said she was surprised at how quickly the utility crew showed up once they found out and brought a pet carrier and a towel over for workers to use to try to catch the cat.

“My biggest concern was it was cold and of course nobody wanted to see it get electrocuted. In my mind, I was thinking that if we could just get it down and possibly catch it and then we could get it into warmth and see if it belongs to somebody,” she said.

Rumery has searched for the cat, but there’s been no sign of it since it scurried away.

Once the cat was off the pole, the crew radioed back to the others at the substation to re-energize the line.

The outage lasted about five minutes and affected 743 customers.

It’s not uncommon for utility companies to battle with squirrels getting tangled up with the wires and conductors, but Wheeler said it’s rare for a cat to climb up and potentially cause a problem.

“It does happen, but it’s much more rare than with other kinds of forest animals,” Wheeler said, adding, “It could have been a much longer restoration if the cat had somehow caused a fault. We would have had to reset fuses and breakers and that kind of thing.”

Tyrannosaurs probably hunted in packs rather than heading out solo, scientists find

The first purple martins of the year have been spotted in New Hampshire.

Gloucester, Mass. and NOAA officials are asking members of the public to stay away from a minke whale carcass that washed up in Folly Cove on Friday.

LONDONDERRY — A raccoon has tested positive for rabies after a confrontation with a dog on Holton Circle, Londonderry police said on Thursday.

NH's secret weapon against child exploitation will work for food

NH's secret weapon against child exploitation will work for food

TikTok's viral beekeeper is getting a lot of ... buzz

TikTok's viral beekeeper is getting a lot of ... buzz

Bird feeders need to come down to keep bears out of trouble, bear expert says.

Bird feeders need to come down to keep bears out of trouble, bear expert says.