Ringworm, a fungal infection that is little more than an annoying rash on humans, is killing porcupines in New Hampshire and two neighboring states, according to research by a veterinary pathologist at the University of New Hampshire.

Out of 44 either dead or diseased porcupines submitted to the UNH Veterinary Diagnostic Laboratory, an unusually high number — 12 — suffered from the fungal disease, said David Needle, a senior veterinary pathologist and assistant clinical professor at the laboratory.

“It’s bad,” he said about a porcupine’s reaction to the pathogen. The porcupine starts producing layers and layers of skin, causing their quills to stick out and impeding their mobility.

“It (the skin) grows over their entire body. They’re unable to walk around, climb trees and forage. They basically starve to death,” Needle said.

During the final years of the seven-year study, researchers cured the condition with an anti-fungal oral medication used by humans, he said.

Researchers don’t know what caused the porcupines to be exposed to the Trichophyton mentagrophytes/Arthroderma benhamiae fungus. But it is commonly found in domesticated animals such as dogs and cats, mice and livestock, UNH said.

The disease represents a disturbing trend of fungal diseases decimating wildlife that have little or no natural immunity — White-Nose Syndrome in bats, the chytrid fungus that is decimating amphibian populations and other fungi that are harming snakes, he said.

He said several factors could be responsible for the infection of the fungus in porcupines: globalization, higher environmental temperatures, human interface with wildlife habitat.

Only recently did the state start accepting porcupine sighting reports on its website, but that is only for roadside porcupines, most of them roadkill.

He said every species plays a role in the food chain. Porcupines are vegetarians that diet on grass, green growth, nuts, berries and fruit in the summer. During the winter they eat twigs and buds of woody plants, which deer also favor.

The species has only one known predator — the fisher, which attacks porcupines either on the face or underbelly. Porcupines can be an important food source for fishers, he said.

He distributed a synopsis of Needle’s research to regional offices after a reporter informed him about it. 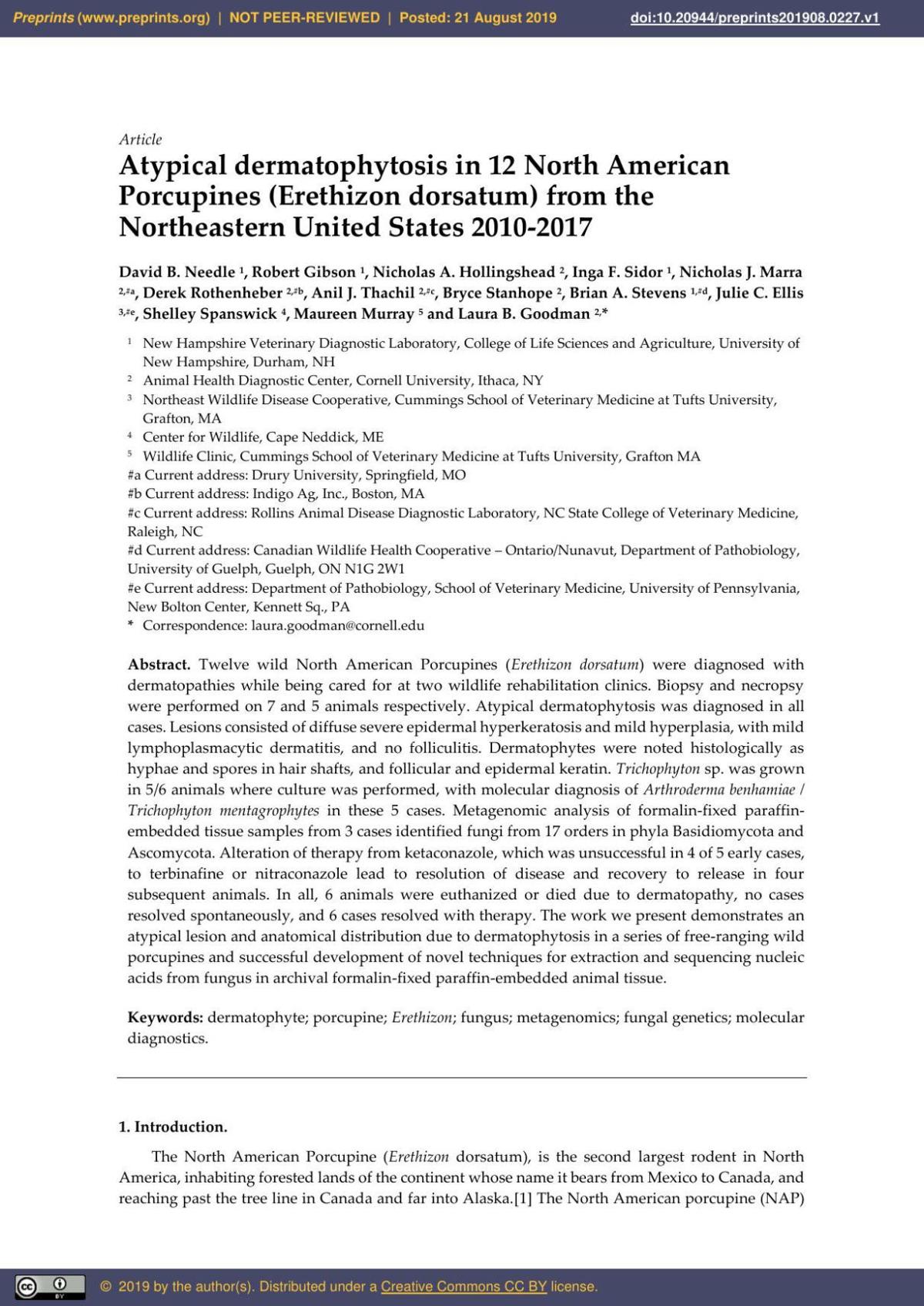 Needle said it’s unclear how the porcupine, which is generally a solitary creature, was exposed to the fungus. The fungus may be able to survive because of higher temperatures in dens where porcupines live, he said.

Humans and other animals react to the ringworm fungus, which attaches to the skin and hair follicles, with a ring-like inflammation, which is the sign of white blood cells attacking the fungus.

But infected porcupines mass produce the skin-like substance keratin, apparently in an effort to flake off the fungus. The production of the protein-based substance weakens the animal, he said.

Needle said wildlife research facilities submitted the infected porcupines over a seven-year period. None were turned over in 2018 or this year. But he thinks the fungus is still out there.

Anyone who spots an ailing porcupine should call state Fish and Game, he said.

Needle is listed as the first author in a paper — “Atypical dermatophytosis in 12 North American Porcupines (Erethizon dorsatum) from the Northeastern United States 2010-2017.”

It is in the pre-publication stage, meaning it has not been peer-reviewed. It is slated to be published in the journal “Pathogens,” according to UNH.

KOCHI, my 16½-year-old Shiba Inu mix passed away on Valentine’s Day. Like so many of my dogs, Kochi taught me a lot. It’s too soon to write about him, but his loss has me thinking about special dogs, lessons I’ve learned from them and amazing experiences we’ve shared. I am no longer surprise…

Hints from Heloise: The best way to clean a litter box

The state’s veterinarian lobby stiffly fought the bill (HB 1387) on the grounds that it usurped their authority and outlawed a procedure that is rarely done.

DOVER — The jury trial for a Middleton man accused of starving his dogs began on Wednesday at Strafford County Superior Court in Dover.

A menagerie of political pets

A menagerie of political pets