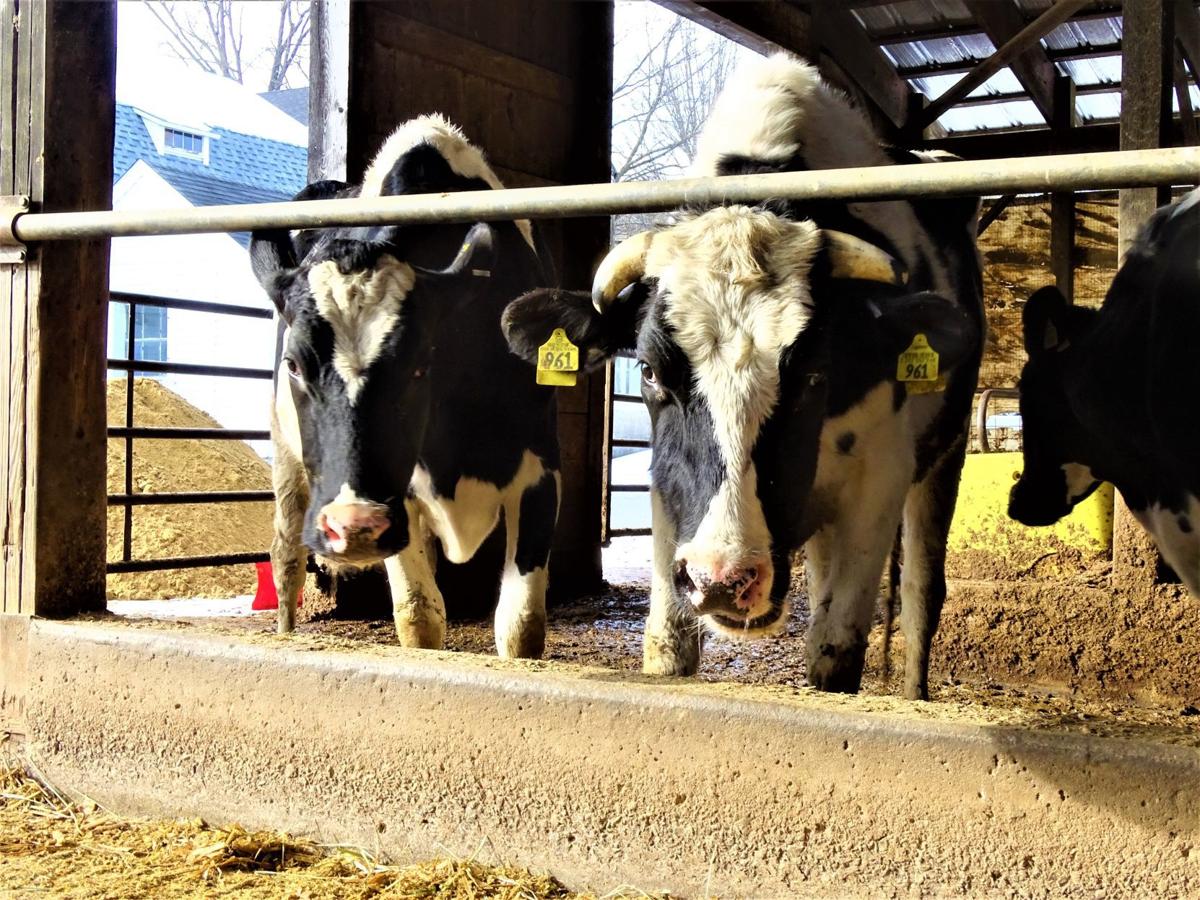 There are more than 100 cows at Yeaton Dairy Farm in Epsom that produce 320,000 gallons of milk a year. 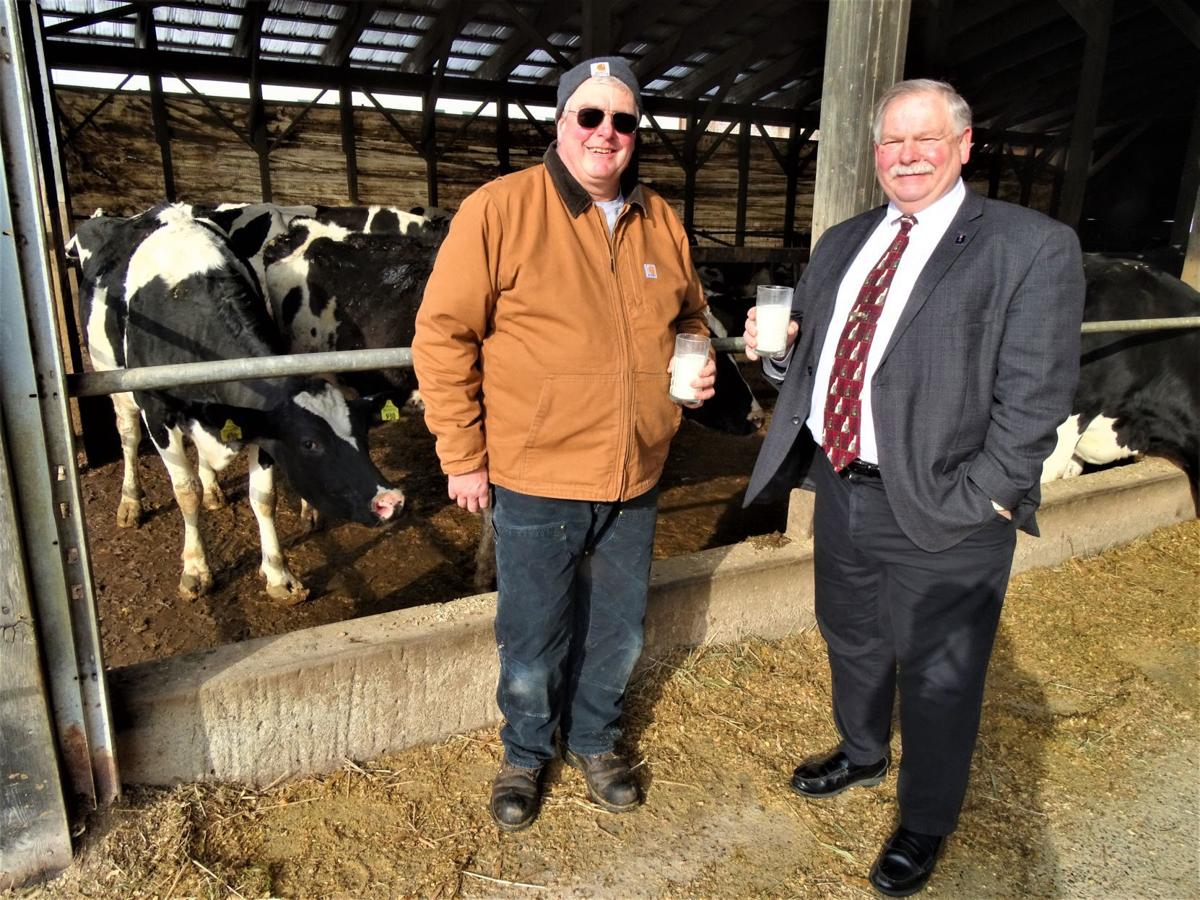 EPSOM — Encouraged by consumers’ reported willingness to pay more, struggling dairy farmers are renewing pleas to major retailers to sell New Hampshire milk so they can cash in on a new state program.

Under a bill passed last year and signed into law by Gov. Chris Sununu in August, specially labeled milk can be sold at a 50-cent per gallon premium. New Hampshire farmers would receive 43 cents of that.

A change.org petition with more than 3,000 signatures and a 2018 University of New Hampshire study showing most people would pay 50 cents more for local milk are being used to goad industry leaders and retail giants into going along.

When Sununu signed the NH Dairy Premium Bill, the hope was that premium milk would be available by the end of 2019. But not everyone was interested in participating, particularly Massachusetts-based Hood Milk.

“HP Hood recognizes the difficulties NH dairy farmers are facing in a market that has been very challenging in recent years,” Lynne Bohan, Hood’s Vice President of Communications and Government Affairs, said in a statement.

Dallas-based Borden Dairy Co., one of the oldest and largest dairy producers in the United States, recently filed for Chapter 11 bankruptcy after more than 160 years in business.

What is needed, Bohan said, is “an approach that has strong support from everyone in the industry.”

New Hampshire’s law “is unique, but it is flawed,” said Bruce Krupke, executive vice president of the Northeast Dairy Foods Association in Syracuse, which opposed the New Hampshire bill.

Krupke said his organization told the state and Legislature that “this kind of program is, at very best, extremely difficult to implement for a lot of reasons and is thus, not workable.”

Krupke said the heart of the problem is that milk consumption is down in a competitive beverage market. He said the one way New Hampshire consumers can ensure local farmers don’t go out of business is to drink more milk.

“It’s very simple. The answer is, have a glass of milk with a meal once in a while. That’s it. We don’t need to have this program implemented administratively, logistically increasing the price for consumers, when the answer is to simply consume more of the product,” Krupke said.

Krupke said he has several concerns, including how out-of-state producers could be harmed, the cost of administering and overseeing the program and the audit process for milk processors.

In the summer of 2018, 85% of more than 500 adults surveyed said they would pay more if the milk was produced by New Hampshire dairy farmers and they knew the money was going to farmers.

In follow-up interviews of more than 600 people at Hannaford Supermarket locations in Portsmouth, Manchester and Concord and almost 500 people at Market Basket stores in Bedford, Epping and Concord, nearly 9 in 10 respondents said the same thing.

Brothers Stewart and William Yeaton, of Epsom, are fifth-generation dairy farmers working a 300-acre farm with 110 milking cows, who produce about 320,000 gallons of milk a year.

Stewart Yeaton, who supports effort to help Granite State dairy farmers, said there is something special about locally produced milk.

“Everybody wants to know where their food is coming from. We’re a local producer. You can see us. You see us out going kind of slow with our farm equipment on the side of the roads, or you may smell the countryside when we spread our cow manure, but the big thing is, we’re a local producer and you know the milk is coming here from New Hampshire, and it’s not coming from the Midwest or out of the country,” Stewart Yeaton said.

Last Wednesday, Stewart Yeaton talked to Shawn Jasper, the commissioner of the New Hampshire Department of Agriculture, Markets & Food, at his farm with media present.

Jasper said they are encouraging consumers to talk to store managers at Hannaford, Market Basket, Shaw’s and Walmart so HP Hood in Concord can see the economic benefit of providing premium milk.

“There’s no reason at this point that Hannaford and Market Basket shouldn’t be on board. Where do you go where 85 percent of your consumers, your customers, want something and you’re not willing to give it to them? It’s mind-boggling to me. Their customers want this,” Jasper said.

Amy Flynn-Hall, executive director at Granite State Dairy Promotion, said consumers constantly ask how they can help local farmers beyond buying the milk their stores stock. She is disappointed more retailers have not put pressure on processors to produce premium milk and support those farmers.

“Right now, it’s up to the retailers to say, ‘We want to give our consumers and our shoppers what they want.’ So, where we are in the process is, we just want to sit down and have a meeting with a retailer and it’s lost on us, and it’s completely lost on the consumers, why a meeting can’t even happen,” Flynn-Hall said.

Officials from Hannaford and Market Basket could not be reached for comment.

SOMEONE ASKED me recently how long it takes to train a dog. There’s no simple answer. It depends on many factors such as the dog’s age, temperament and personality, breed or mixed breed characteristics, prior training if any, the chosen training method, and so much more.

A coyote choked to death by a Kensington dad after it attacked his son Monday was rabid — and it might not be the only rabid coyote in the area, state officials said.