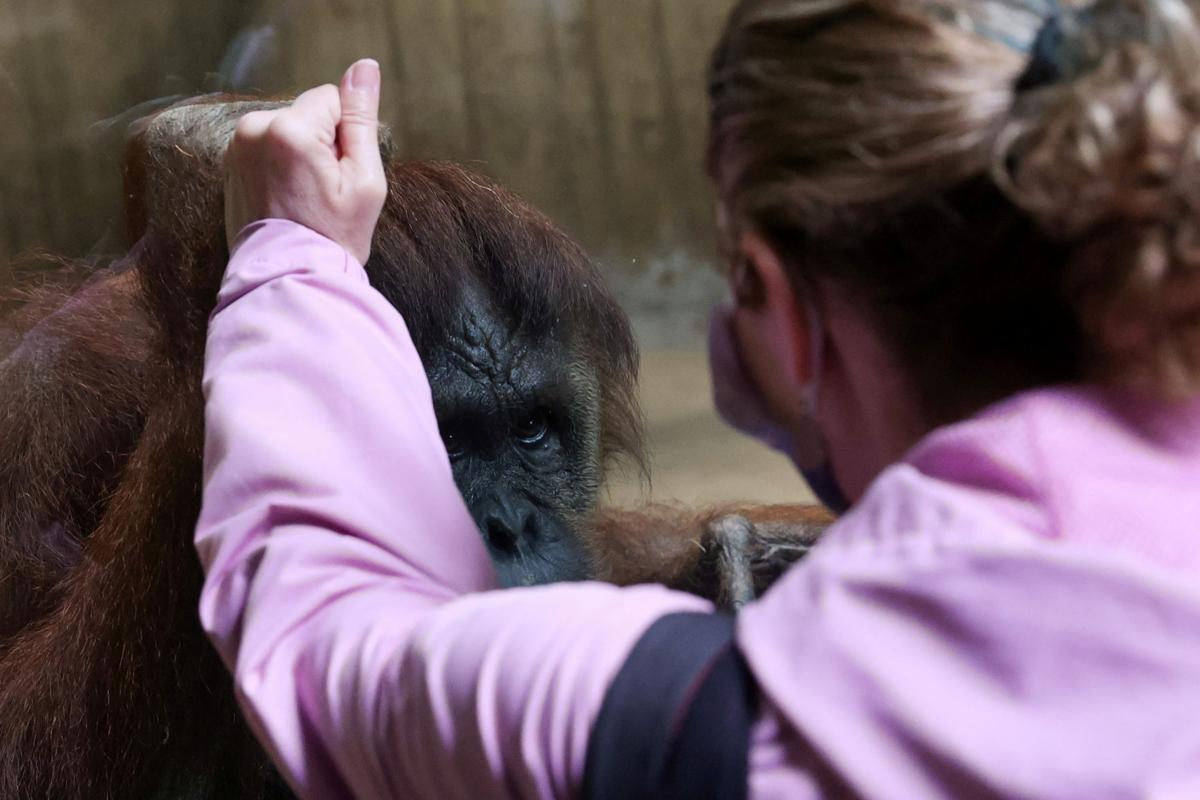 Above, Lucy the orangutan and visitor Amy Russian greet each other with mirrored hands as the National Zoo reopens for socially-distanced patrons for the first time since the start of the coronavirus disease (COVID-19) outbreak in Washington on Friday. At right, a mask has been placed on one of the bronze lions that flanks the front gate of the National Zoo. 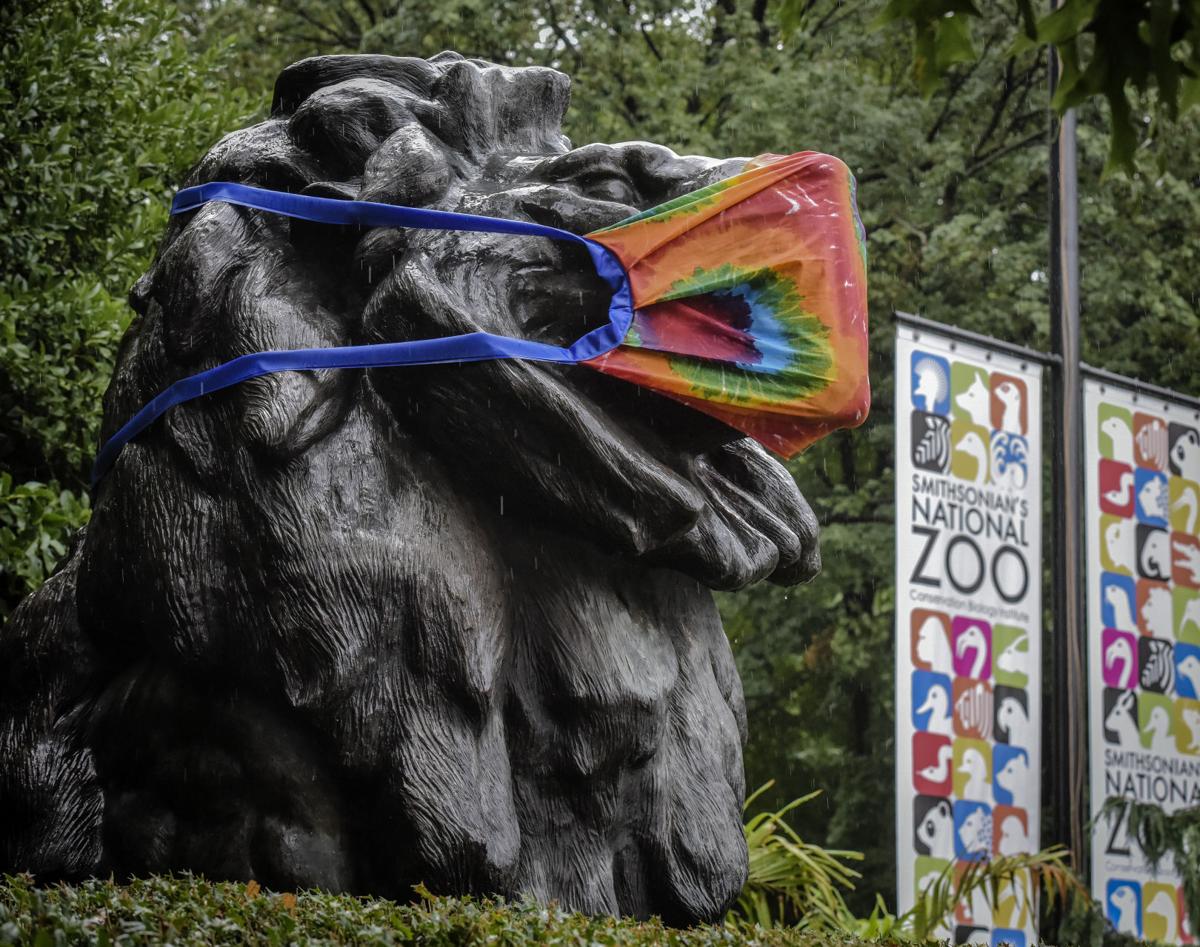 A mask has been placed on one of the bronze lions that flanks the front gate of the National Zoo.

Above, Lucy the orangutan and visitor Amy Russian greet each other with mirrored hands as the National Zoo reopens for socially-distanced patrons for the first time since the start of the coronavirus disease (COVID-19) outbreak in Washington on Friday. At right, a mask has been placed on one of the bronze lions that flanks the front gate of the National Zoo.

A mask has been placed on one of the bronze lions that flanks the front gate of the National Zoo.

Aundrea Wilcox and her husband, Matt, packed up their three kids and the double stroller and the umbrellas, jumped in the car and in the rain drove 60 miles from their home in Fredericksburg, Va., to be at the National Zoo when it reopened Friday morning.

They would not be stopped.

There had been nothing for the kids to do. For days, weeks, months. But now, at last, here was the zoo — back after a long coronavirus closure.

The looked happy as they paused for 2-year-old Kiera to see a Grevy’s Zebra shortly after the zoo opened at about 8 a.m. “All these kids have been so cooped up,” Wilcox said. “Finally it’s something for them.”

Their other children are Evalyn, born “right in the middle of COVID on March 31,” and Ryan, 9.

“I’ve been watching on Instagram, waiting for [the zoo] to post that they were finally doing something to reopen,” their mother said. “As soon as they did, I went on the website, got everything reserved as soon as I could.”

They were among dozens of visitors — people with children, zoo regulars, and devotees of specific animals — who said they were glad to be back after four months.

Social distancing and masks were required, and large tie-dye masks were placed over the muzzles of the huge bronze lions at the zoo’s main entrance.

People were welcomed by the zoo’s director, Steven Monfort, and Lonnie G. Bunch III, Secretary of the Smithsonian Institution, which operates the zoo.

“Just to see the kids, the excitement in the kids’ eyes, that’s part of why we’re here,” Bunch said. “For me, this is really a wonderful moment to remember that the Smithsonian’s major focus is to be of value to the people who want to come to us.”

“The bottom line is: Welcome back,” he said.

The zoo and the Smithsonian Air and Space Museum’s Steven F. Udvar-Hazy Center, near Dulles Airport, were the first of the institution’s facilities to reopen Friday.

From there, “we really test how things go,” Bunch said. “We see how the virus is. The staff has got creative ways for social distancing. And we want to just see, are there things we need to tweak.”

The zoo is providing online a limited number of free daily timed tickets. It is sold out Saturday and Sunday.

The first to arrive Friday were Allen and Merry, regulars who were wearing white T-shirts bearing the likeness of Redd, the zoo’s three-year old Bornean orangutan. Allen declined to give their last name.

She said she screamed with joy when she heard the zoo was reopening. She was at work in her store’s stock room, and a co-worker asked if she was OK.

“I said, “Oh my God, I just got the email that the zoo is opening Friday!’” she said.

Randie White said she knew that two of the zoo’s older elephants had been put to sleep in recent months. She was worried about the others. One had lost weight, she said. But new bonds were forming among the survivors.

Life and death had continued at the zoo, despite the virus closure.

Along with the deaths of elephants, Ambika, 72, and Shanthi, 45, an elderly flamingo died, as did four elderly Panamanian golden frogs.

Two new bison, Lucy and Gally, arrived just before the shutdown, with their shaggy winter coats. The coats have now been mostly shed for summer.

“So much has happened,” Brandie Smith, the zoo’s deputy director said.

“One of the great things about working here and working with animals is that life has gone on,” she said. “Animals are born and they die and they mate. The animals are unconcerned with COVID and what’s going on in the world.”

“It’s been a nice little respite to be here, just to see life taking its course,” she said.

As she spoke, birds chirped and the zebra brayed. The cheetahs next door to the zebra lounged in the grass. And nearby the whiskered red river hogs rooted in their yard.

In the Great Ape House, a solitary orangutan sat with its face up against the glass of its enclosure, peering at people who passed.

Outside the ape house, zoo regulars Joe Howell, 78, and Embry Howell, 74, who live in Washington, D.C., watched other orangutans play. The animals seemed more relaxed, with fewer people around, the Howells said.

They said they missed the zoo terribly.

“It’s been a big hole in our lives not to be able to come,” she said.

Having a hound puppy is a new experience for me. Brio isn’t my first hound. I had a basset hound for 12 years, but she was a year old when I first met her. Having 12-week old Brio, a Basset Fauve de Bretagne, is great fun, but would be frustrating if I weren’t prepared for his hound-i-ness.

IMUS, Philippines — With his black sports jacket, reflective aviator sunglasses and bespoke orange helmet with holes so his ears can stick out, Bogie the dog sure is one suave-looking canine, with an Easy Rider look that would earn him a place in any motorcycle gang.

GEMBLOUX, Belgium — The exotic animals are confined to small paddocks, the acrobats have been grounded, and the clowns aren’t able to make an audience laugh anymore.

No, they're not pulling your leg.