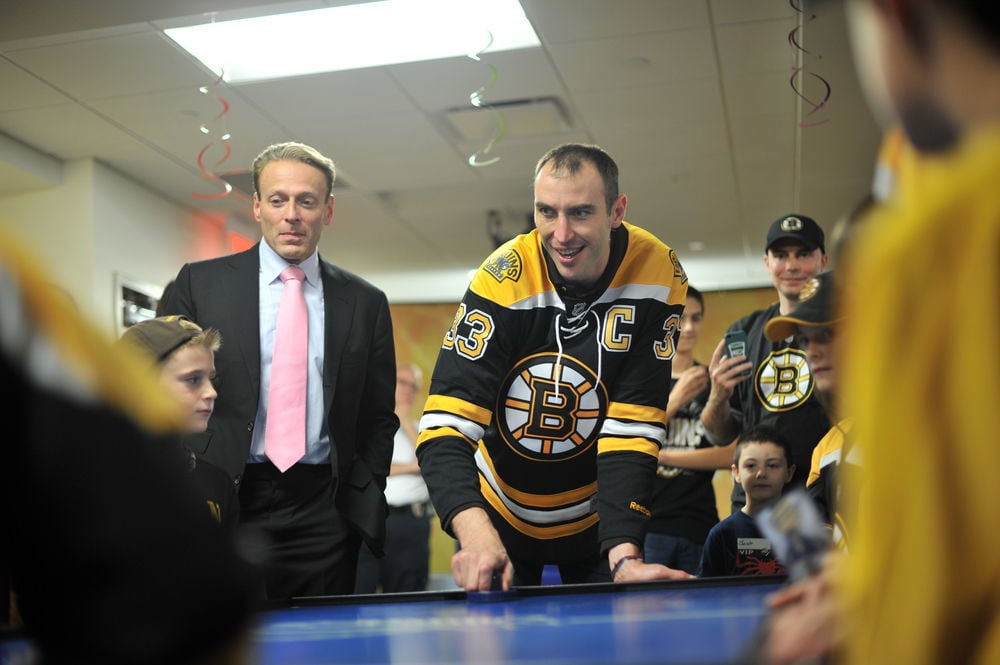 Bryan Hoertdoerfer’s 11-year-old daughter and 8-year-old son will be heading straight from school in Massachusetts to Manchester on Wednesday afternoon to hang with their dad and Big Z.

Maybe they might play some air hockey or get some jerseys signed as Boston Bruins captain Zdeno Chara holds court at the Elliot at River’s Edge for the 9th Annual Big Z Challenge.

For Hoertdoerfer, it’s a chance to raise funds for the Elliot Regional Cancer Center — scheduled to open later this year — and indulge his lifelong passion for hockey. For Chara, it’s a chance to hang out away from the pressures of the NHL.

“It doesn’t require anything from him other than to show up, hang out, have a good time, and every so often talk to reporters from radio stations, from TV stations or from newspapers such as yourself, and he just really enjoys it,” said Hoertdoerfer, who spent three years serving as the Bruins’ dentist after he bought his dental practice in Manchester in 2011.

The first Big Z Challenge, held that year at Hoertdoerfer’s office, raised $5,000. This year, the effort has already raised $29,000 and he hopes to hit the $30,000 mark. Since the first challenge, the event has raised more than $152,000. Some donations come from doctors he connects with through patient referrals. His relationship with the Elliot also has grown over time.

“As I got to know a lot of people associated with the Elliot Hospital, and the Mary and John Elliot Foundation, we managed to, with their help, expand to them allowing me to use their location at River’s Edge, and they also sent out a lot of emails and flyers through their own intranet in the hospital system,” Hoertdoerfer said during an interview last week. “And they introduced me to a lot of great people who were were willing to help, such as Tom Raffio, from Northeast Delta Dental, Bill Greiner from Primary Bank, and the list goes on.”

Like Chara, Hoertdoerfer aims to mostly just have a good time — he’s passed on the organizing work over the years to members of his staff.

“My hands-on role has become less and less every year, which is the way I like it, to be honest. Because I have so many good people around me to help me out,” he said.

“I played in high school and college — not very good in college — but I managed to play on a lot of adult teams,” he said. “And fortunately by doing the stuff with the Bruins for the first three years, I got to meet Bob Sweeney from the Bruins Foundation.”

“I put a team in and we get to hang out with NHL legends and Bruins alumni and play with them,” Hoertdoerfer said.

Such events and the Big Z Challenge underscore the spirit of giving back that the NHL embraces, he said. It’s something he figures his children will later appreciate.

“I’m sure when they’re older they’re going to slowly start to understand what it was all about and why it’s so important … to give back. Everybody needs to give back to the best of their ability,” he said. “I’m fortunate where I am so I can give back in this way, but there are many, many other people who give back with time in soup kitchens, you name it.”

Chara and Hoertdoerfer will host 150 young hockey fans and their families. Tickets for the 2:30 p.m. event at 185 Queen City Ave. are available at bigzchallenge.com are $30 for children, $65 for adults, with discounts for adult and child tickets purchased together.

Chara will challenge a junior hockey team to a game of street hockey, greet fans, play air hockey with them and pose for photos. There will also be drawings for Bruins tickets and autographed memorabilia.

This year the Big Z Challenge will be spotlighting the 2009 New Hampshire Avalanche Junior Hockey Team.

“The team and their family have donated $1,000 to be part of this. We limited it to just one because it gets to be a little crazy in there,” Hoertdoerfer said.

Mike Cote is the business editor of the New Hampshire Union Leader. Contact him at mcote@unionleader.com or 206-7724.

Chris Duhaime planned for the worst case scenario before he launched his new business.

RICK BARON had just launched his plumbing and HVAC business when COVID-19 reached New Hampshire, and then things got quiet.

Business Editor's Notebook: Cover up and strap in for a long ride

COVERING your face with a mask before you mix in public is rapidly becoming as commonplace as strapping on a seatbelt before you turn the key in the ignition.

Beaches, barbecue and fireworks stung by the summer of social distance

THE FOURTH OF JULY weekend is the apex of the summer season. Barbecues. Beaches. Fireworks.

A 17-year-old boy drowned in the Pemigewasset River Friday afternoon.

NEW YORK — More than 160,000 people have died from the coronavirus pandemic in the United States, nearly a quarter of the global total, according to a Reuters tally on Friday, as the country debates whether schools are ready to reopen in coming weeks.

LOS ANGELES — Looking for a new way to communicate during the pandemic? A Los Angeles company has created phone booth-sized machines to beam live holograms into your living room.

General Motors unveiled a long-awaited Cadillac electric vehicle that will offer Tesla-like range, though prospective buyers will need to be patient.

Employment in U.S. increased by more than forecast in July

The U.S. labor market continued to regain ground in July, indicating the economic rebound is still making headway despite a surge in coronavirus infections.

Don’t look now, but Buick is the shape of the auto industry’s future, and that shape is an SUV.