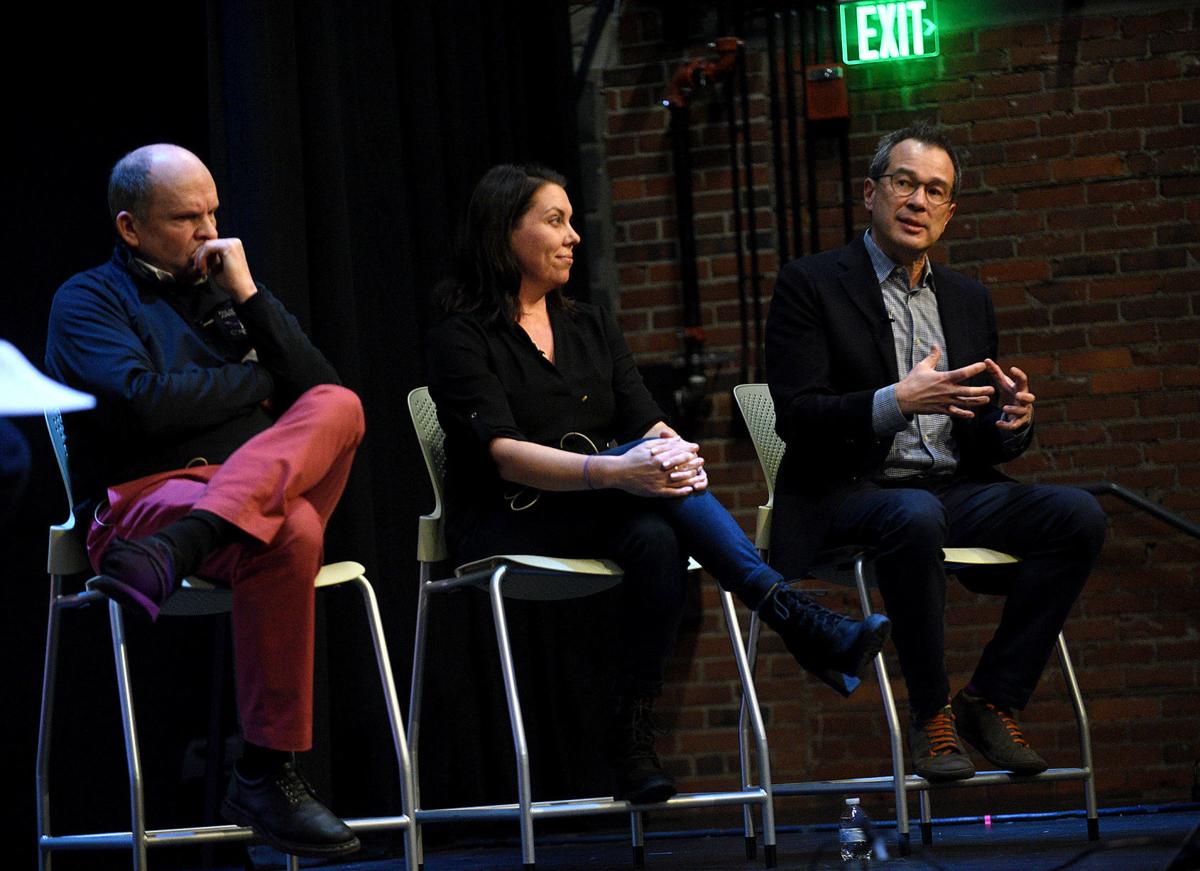 From left: Peter Ramsey of the Palace Theatre, Sara Stewart of the New Hampshire Department of Natural and Cultural Resources, and Alan Chong of the Currier Museum of Art talk about arts and the economy at the Rex Theatre in Manchester on Wednesday. 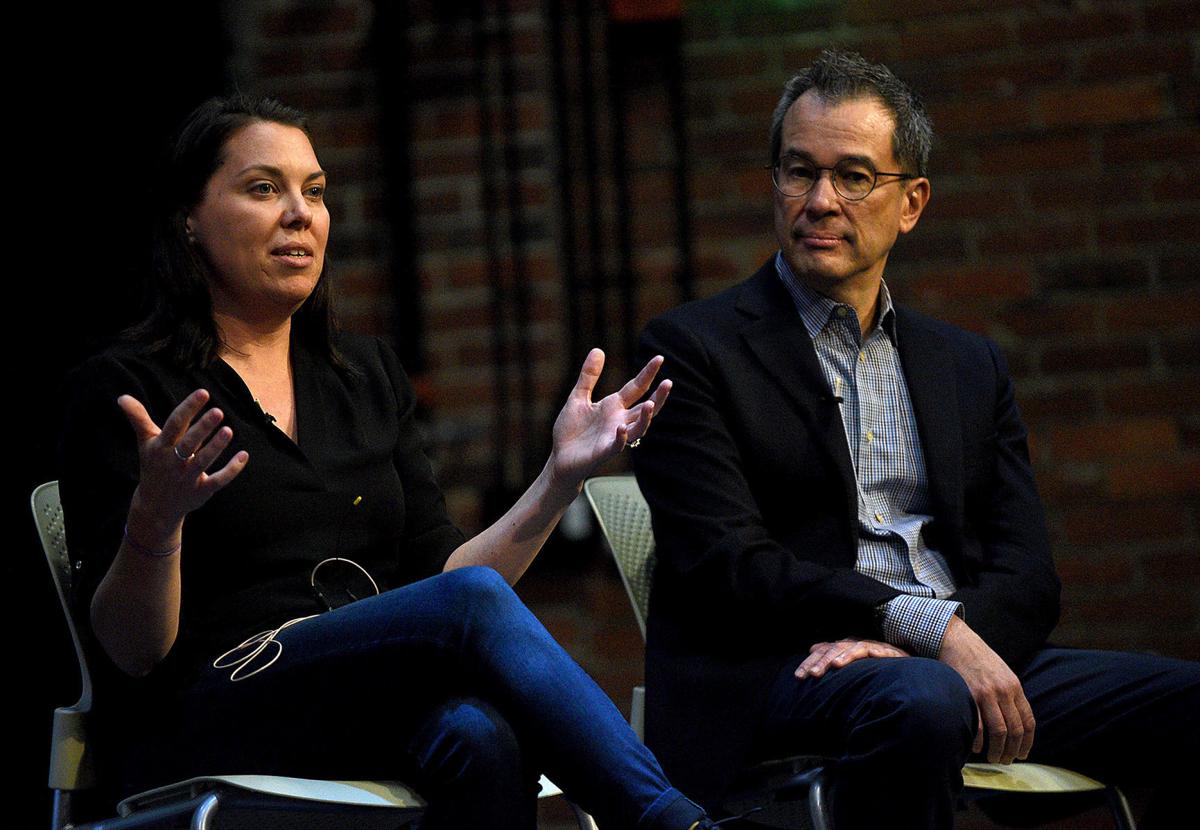 Panelist Sara Stewart, commissioner of the New Hampshire Department of Natural and Cultural Resources, speaks at a talk about arts and the economy at the Rex Theatre in Manchester on Wednesday. Also pictured is Alan Chong, CEO of the Currier Museum of Art. 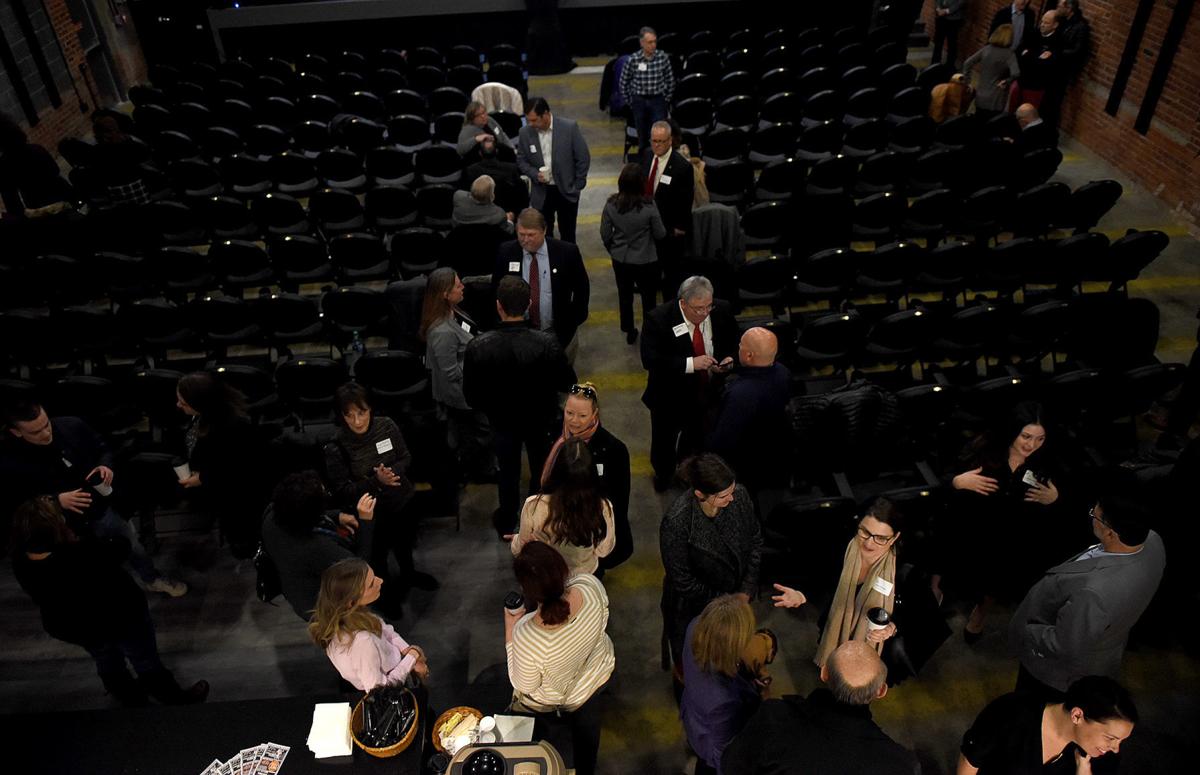 Guests mingle at a talk about arts and the economy at the Rex Theatre in Manchester Wednesday.

Welcome back, Rex Theatre. We prefer you to a parking lot.

During a forum Wednesday on how arts and creative culture spark the economy, moderator Mike Skelton of the Greater Manchester Chamber asked how many of us were visiting the Rex for the first time.

Like many in the audience, I raised my hand. And while it was technically accurate this was my first visit to the newly reopened venue, I’d been there before.

In the summer of 1980, I was at the Rex with a girl I was dating for a midnight showing of the Led Zeppelin concert film “The Song Remains the Same.” Our shadows were taller than our souls.

Arts and creative culture spark memories — memories that give us a sense of place, a sense of time, a sense of what it means to be human. The arts enrich our lives in ways we often take for granted. Then something — like a visit to a theater brought back from the dead — blows the cobwebs off a forgotten moment.

The arts help drive the economy, which is great ammunition for nonprofit groups lobbying the Legislature for tax dollars or private donors for support. Last year, Americans for the Arts estimated the arts and culture business in Rochester, Concord, Portsmouth and the Monadnock region together pump $120 million annually into the state’s economy. The study was just a subset of New Hampshire so the overall figure would be considerably larger.

But that’s not what we think about when we experience the arts.

Sarah Stewart, commissioner of the state Department of Natural and Cultural Resources, spends much of her time driving around New Hampshire, checking in on the growing arts scenes in Keene, Littleton, Bethlehem, Concord, Portsmouth and other locales.

“Things are happening in an elevated way. I think part of it is because we’re talking about it more,” Stewart said. “We’re acknowledging that the creative economy is more than dance and museums. It encompasses cultural and culinary and galleries and street art and tech and creative work online.”

Alan Chong, director and CEO of the Currier Museum of Art, compared the economic impact of the Manchester museum to a similar-sized business with 60 employees and a $7 million budget, minus the nonprofit’s tax-free status.

The tourists the museum draws and the money they spend while they are here are important to consider, but that doesn’t truly capture the Currier’s impact, he said, noting the museum’s ties with the community, including local schools.

“We’re here to help people understand creativity, to absorb culture and art generally and how it affects every aspect of our lives,” Chong said.

Last month, the Currier expanded its holdings with the purchase of a Manchester home designed by celebrated architect Frank Lloyd Wright. With the help of an anonymous donor, the museum closed on the 1,406-square-foot Toufic H. Kalil Usonian Automatic House in the city’s North End for $970,000.

The museum now owns the only two homes designed by Wright in the state. The Currier acquired the Zimmerman House, in the same Heather Street neighborhood as the Kalil house, 30 years ago.

“We’re also in it for the long haul,” Chong said. “One of the problems with economic figures is that they’re focused on the next couple of years … You’ve got to take a broad view when it comes to culture and the arts.”

With the addition of the Rex, the newly rebranded Palace Theatres group now commands four stages in Manchester. The Rex offers an alternative setting for performances that would not attract a big enough crowd to fill the Palace, which has about three times as many seats. The Palace was able to acquire the Amherst Street building through a partnership with the Manchester Development Corp., which loaned the nonprofit $1.7 million to renovate the 300-seat theater.

The Rex, which began its life as a printing shop, became a movie theater in 1945. By the early ’80s, that run had ended. The theater’s most recent incarnation was as a nightclub, which shuttered several years ago.

“I, like everybody else, had walked by this building for 20 years, and five years ago there were politicians in Manchester that wanted to tear it down so we could have nine parking places for businesses on Elm Street, and I said no,” said Peter Ramsey, president and CEO of the Palace.

Last year, the Palace had its best year ever, drawing 160,000 patrons, including one-third who traveled an hour to come to downtown Manchester, mostly from northern Massachusetts, Ramsey said. The Palace’s $5 million budget is a long way from the $200,000 debt Ramsey took on when he took over its management 20 years ago.

History would suggest the Rex will be better off with the Palace than as a parking lot. So far, the theater has hosted stand-up comedy and local favorites like the Jimmy Lehoux Band. It may try screening art films early in the week, Ramsey said, as a way to help keep the Rex open every day.

For some of us, “The Song Remains the Same” would go down fine as an art film. Here’s to a bear-chested Robert Plant belting out “Stairway to Heaven” at the Rex. See you at midnight.

When Melody Roberts moved from Hyde Park, on the South Side of Chicago, to the north shore suburb of Wilmette with her son Jason Pereira, 16, she said there were a number of theories floating around the neighborhood: One was she was secretly getting divorced from her husband of 27 years. Ano…

From Fish & Game: Rev up for snowmobile season

Winter can be a difficult time to get outside, what with the colder temperatures and limited hours of daylight, but snowmobiling is a great way to get some fresh air and enjoy an outdoor adventure. Snow cover has been limited in parts of the state, but the North Country has been seeing some …

ROCHESTER — Emergency rescue crews extricated a driver who was trapped inside his vehicle after it struck a concrete barrier at the Spaulding Turnpike tolls in Rochester on Thursday.

The man arraigned Wednesday in Massachusetts on charges he murdered a Leominster, Mass., woman late last year is also wanted on criminal charges in Keene.