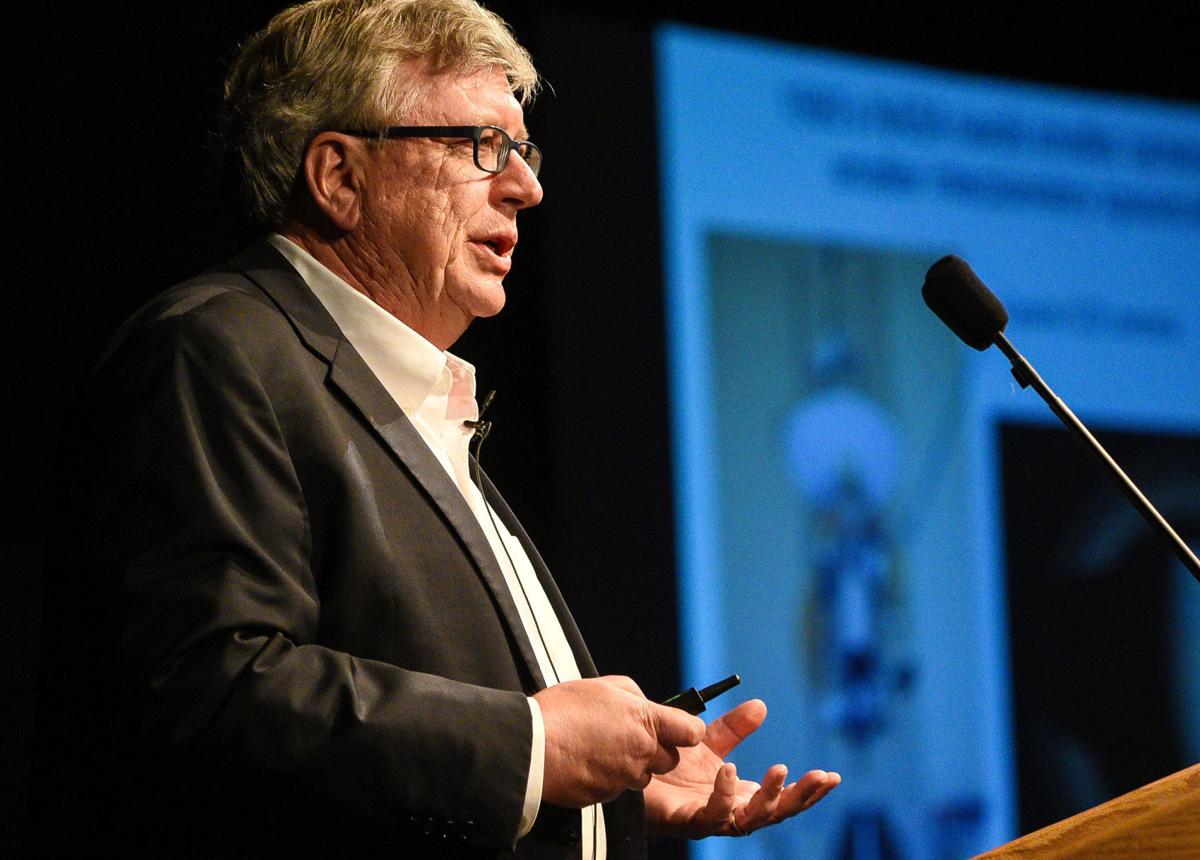 Entrepreneurs spinning off research from a government lab or university face a couple of likely phases if they are lucky enough to be successful: the excitement that comes from commercializing a new technology and the malaise that sets in when their startup is acquired by a bigger company.

That’s when it’s time to move on to the next adventure.

Eric Fossum recalled that process during a keynote at the New Hampshire Tech Alliance’s Entrepreneur of the Year event June 13. Fossum, who now serves as the John H. Krehbiel Sr. Professor for Emerging Technologies at the Thayer School of Engineering at Dartmouth, is best known for inventing the CMOS image sensor.

The “camera-on-a-chip” is used in billions of smartphones and web cameras. It grew out of research Fossum was working on for NASA’s Jet Propulsion Laboratory in California. The technology was driven by a simple edict from a NASA administrator: Make everything smaller and more efficient.

When Fossum was recruited to work at the laboratory in 1990, NASA was working on the Cassini-Huygens mission to build a probe that would study the planet Saturn. During his talk to the Tech Alliance, he shared a photo of a spacecraft as tall as a building, dwarfing the engineers working on it.

“This is the kind of spacecraft that broke the back of NASA. To build these giant spacecraft, it’s extremely expensive and takes a very long time,” Fossum told the group gathered at the DoubleTree by Hilton in Manchester. “The administrator at NASA said we need to make things faster, cheaper and better, and that was his mantra.”

A camera mounted on the side of Cassini was about the size of refrigerator. The next one had to be the size of a coffee cup.

“That was our goal. The question was, how could we do that?” Fossum said.

The charge-coupled device (CCD) imaging technology in use at the time was dominated by Japanese firms. It used a lot of power and required large batteries to operate. Fossum proposed using complementary metal-oxide-semiconductor (CMOS) technology, “the standard for constructing integrated circuits on computer chips,” according to a profile of Fossum published in 2015 in Dartmouth Engineer Magazine.

“Using that technology, combined with a new technique called ‘active pixel sensing,’ Fossum hypothesized that he could dramatically shrink the size of the camera and the power it consumed and make it less susceptible to radiation damage,” the magazine said.

“Once we were able to make a good pixel we could integrate the pixels on a chip,” Fossum told the Tech Alliance audience. “It was very clear that once we were able to do this, it had tremendous advantages not only for NASA and spacecraft, but it could be useful here on Earth.”

NASA entrusted Fossum with pitching the technology to industry giants like Texas Instruments, Kodak and National Semiconductor, but he was met with lukewarm response. Companies expressed interest but not enough to actively pursue it.

“I’ve become more patient, but at that time it was driving me crazy. We were going to lose this opportunity if we don’t do something and act on it,” said Fossum, 61. “All of you entrepreneurs know that there’s a window of opportunity. You’ve got an idea and a solution, and if you just sit on it, it will probably go nowhere.”

With his then-wife, Sabrina Kemeny, Fossum started Photobit in 1995 to further develop and commercialize the image sensor technology.

“Frankly I had no idea what we were doing. … These days there’s a much larger ecosystem for helping startup companies get going and maturing. Of course, we’re doing that also at Dartmouth with our students,” said Fossum, who oversees Dartmouth’s tech transfer program and recently worked with some of his students to create a new company.

A chance meeting with a reporter for BusinessWeek who was visiting the Jet Propulsion Laboratory led to a two-page story about Fossum’s research and helped ignite interest in the young startup. Over the next several years, Photobit would grow to nearly 150 people until the company was acquired by Micron Technology in 2001. Fossum remained with the company for awhile, a period he described as “probably the worst year of my life.”

“If you are an entrepreneur and you’re successful and you sell your company, just leave. You don’t want to hang out. It’s not good,” he said. “You go from being a big rooster to not being the big rooster for someone who doesn’t know as much as you about the business or the technology.”

Last summer, Fossum and a couple of his former students spun off a company aiming to commercialize the next generation of image sensor technology.

Gigajot Technology “aims to bring a variety of products to market using the Quanta Image Sensor (QIS) which makes it possible to produce sharp images in extremely low light,” according to Dartmouth Engineer Magazine. The company is initially targeting scientific research and medical imaging markets but hopes to eventually compete in the same consumer markets that use the CMOS sensor technology Fossum invented in the 1990s, the magazine said.

Fossum’s co-founders decided to move Gigajot to Pasadena, Calif., a move he said was aimed to ensure the startup was poised for rapid growth — and one he said underscores a challenge for the Granite State as it tries to retain young talent and emerging companies. Gigajot needed to be close to the tech labor pool of Silicon Valley.

”When you get to the steep part of the growth curve, you have to hire a lot of people to keep up. If you have to relocate every hire up to the Upper Valley, it becomes an impossible problem,” he said.