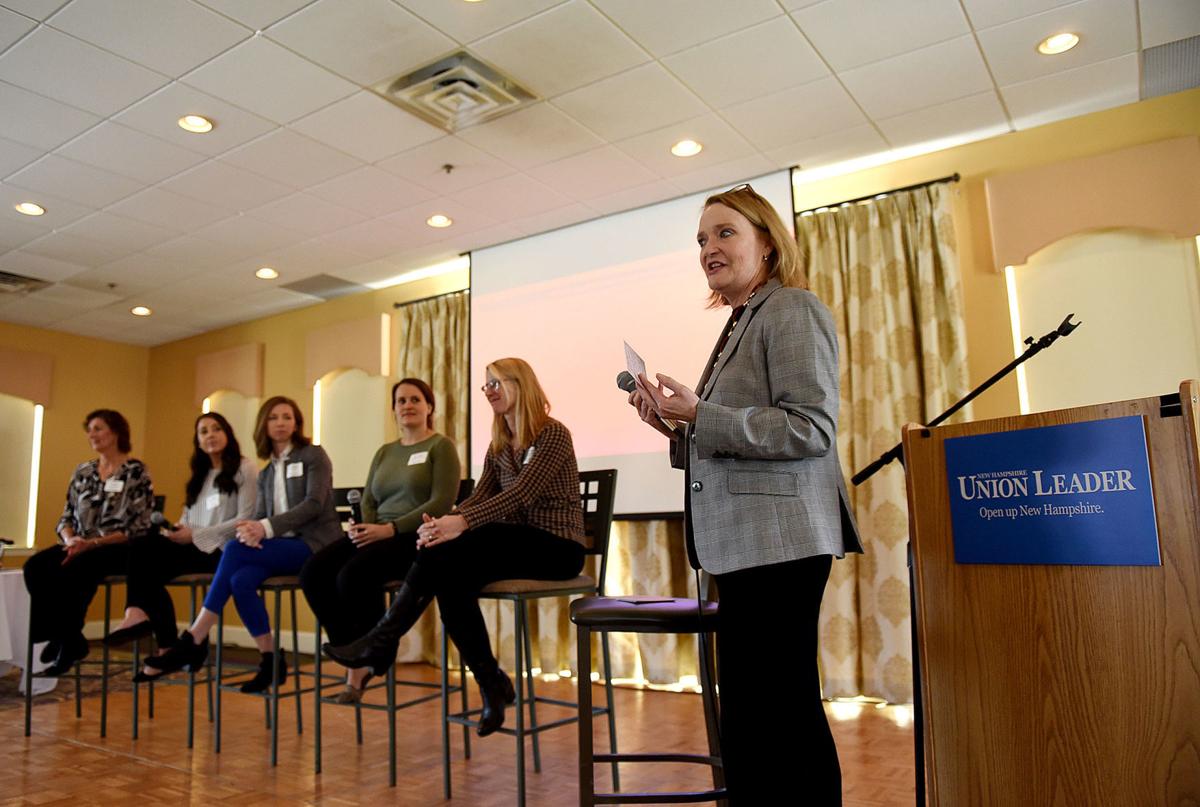 Joyce Levesque, chief financial officer of the New Hampshire Union Leader, right, moderates a panel at the Union Leader Symposium Series on Women in Engineering in Manchester on Thursday, March 7, 2019.

Women who undergo the rigor of getting an engineering degree will have plenty of career options but still could face a workplace where their male counterparts make more money than they do.

The percentages vary — the gap is smallest among biomedical engineers and largest among software developers, aerospace engineers, civil engineers and electrical engineers, according to the U.S. Census Bureau and the Society of Women Engineers. Various studies show the gap anywhere from the single digits to 25 percent.

But the difference always stings.

Ask Lisa Martin. These days she’s president and principal of Quantum Construction Consultants LLC in Concord. On the path to owning her own company, the civil and structural engineer calculates her retirement savings would have grown a lot fatter had she been making the same amount of money as her male contemporaries over the course of her 37-year career.

“I know I was underpaid most of my entire life,” Martin said Thursday during a forum on women in engineering hosted by the Union Leader. “It’s a struggle because not only was I underpaid — you take the money that you would have been paid equal to a man and invest it in your 401(k) — I would have had probably a million dollars more than I have today. Now, it’s too late for me, but it’s not too late for the industry and for young engineers.”

The forum was the kickoff for the Union Leader Symposium Series. The event at the Derryfield Country Club in Manchester featured a panel of five female engineers. They fielded questions from moderator Joyce Levesque, chief financial officer at the Union Leader.

Bridget Pichette, vice president of manufacturing and quality at Stonyfield Farm in Londonderry, said she never experienced a pay gap in her previous roles in pharma and biotech or as part of the senior leadership at the organic yogurt company. She recommends job hunters be armed with the data they need to secure the best salary.

“I think one of the key elements for anyone coming into any business or any career is that you need to know what your industry is paying,” she said. “You need to do your homework, you need to research and figure out, ‘What is the region paying?’ — because it’s also very regional — and, ‘What is the particular role paying?’ Going into your job and your interview, you know that you’re requesting something that is appropriate and comparable.”

Demanding comparable pay is one aspect of advocating for yourself, the panelists discussed.

Julie Whitmore, a project manager at civil engineering firm Vanasse Hangen Brustlin (VHB) in Bedford, said she used her engineering acumen, including weighing risks, when she was struggling on whether to leave her job. A second pregnancy forced her hand — starting over somewhere else would be too difficult under the circumstances — but she said working through the process helped her find her limit and her voice at work.

Dale McGrath, project coordinator at DEKA Research and Development in Manchester, recommended that young women beginning their careers decide what’s important to them and determine from the outset how many hours they are willing to work.

“It’s really important to self-reflect and decide what matters to you,” McGrath said. “Obviously, career is very important when you’re just getting started. You don’t want to be the person who always says no because they won’t come to you and they won’t ask you anything anymore. You also don’t want to be the person who gets so overwhelmed by everything that people are asking you to do that you just shut down and you can’t do it anymore.”

McGrath said she set clear boundaries with her managers, telling them she would work hard but would be spending 40 hours at her desk — not 60. Now, no one questions when McGrath leaves for the day at 4 p.m. so she can enjoy running, hiking and walking her dog.

Taylor St. Peter, a transportation designer at VHB, has been in the industry for two years since graduating from college. She’s just beginning to contemplate that work-life road map.

“When you’re young and trying to build your career and also having a life, it’s definitely a struggle because you want to put in those hours,” St. Peter said. “But it’s going to change different parts of my life. I don’t have kids right now. I don’t have that extra aspect in my life. But maybe one day down the line if I do have kids of my own, my work-life balance is going to look a lot different than what it looks like currently. It’s really going to vary from person to person.”

The Union Leader Symposium Series features in-depth discussions of critical issues. Each event brings together experts for an open discussion of problems and solutions. The next symposium, on April 11, will focus on workforce issues and feature alumni from the Union Leader’s 40 Under Forty awards program. The September forum will focus on health care; the October forum will present female New Hampshire innovators.

Thursday’s symposium was presented by Goldman Sachs: 10,000 Small Businesses and was sponsored by BAE Systems, the New Hampshire Society of Professional Engineers and the American Council of Engineering Companies of New Hampshire.

The acquirer, Creating IT Futures, which helps prepare adults underrepresented in the tech field for such careers, is no stranger to TechGirlz.

Tulsi Gabbard to speak Thursday on economy at Portsmouth forum

PORTSMOUTH — U.S. Rep. Tulsi Gabbard is the next presidential candidate scheduled to speak at an economic forum.

HOPKINTON -- The fate of the Hopkinton Rescue Squad remains undecided.

EXETER -- The select board has trimmed nearly $2 million from the price tag for a proposed recreation park redevelopment project.

CLAREMONT — A Pleasant Street man could be headed to New Hampshire State Prison now that he’s been charged with two counts of disseminating private sexual images.

NORTH HAVERHILL — A Plymouth man who allegedly sent a woman a sexual image of herself in the hope she’d send him nude photos asked a judge Monday to dismiss the charge against him.