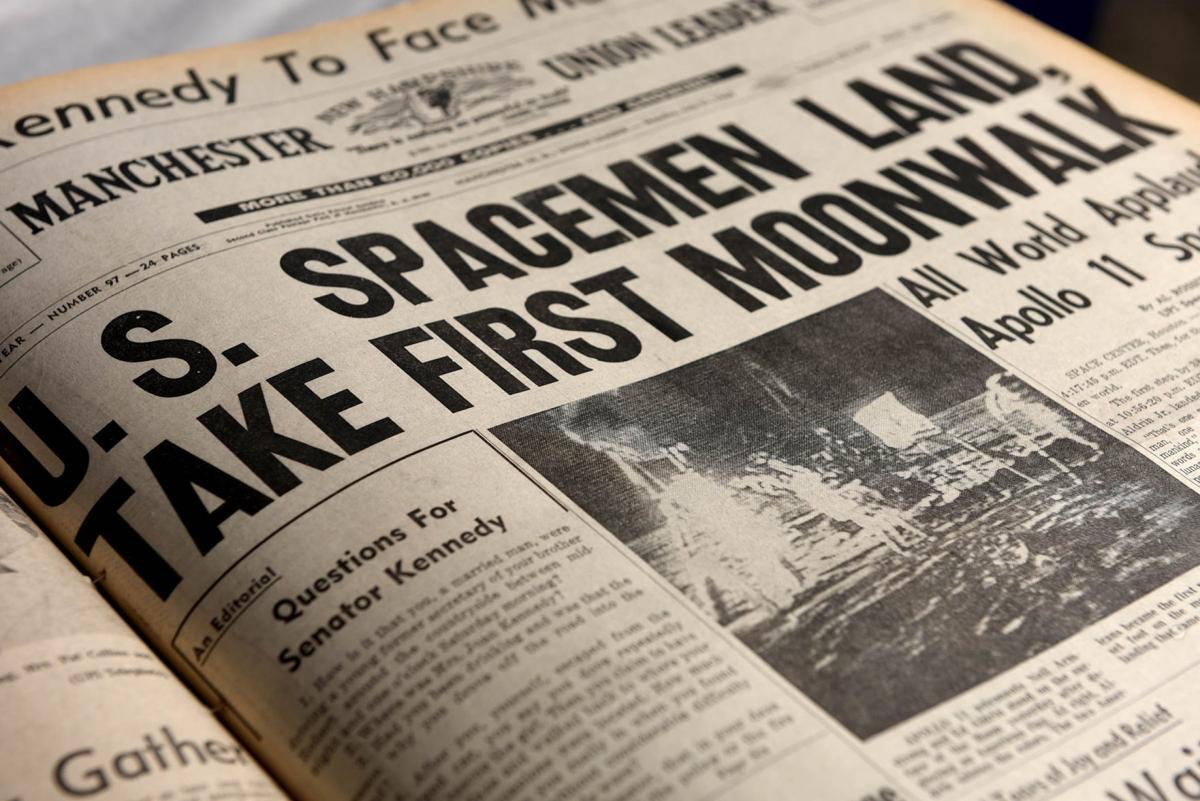 Apollo 11 coverage in the Manchester Union Leader from an edition on Monday, July 21, 1969.

If you grew up in the 1960s, Armstrong was your American Idol. The first man to set foot on the moon commanded a prime spot on your wall, sharing the spotlight with Buzz Aldrin and Michael Collins on posters you could buy everywhere. The Beatles were about to break up, but now we had these guys. And they rocked it all the way to the moon and back.

In one of the most divisive periods in U.S. history, we had a moment when a great adventure eclipsed the turmoil that seemed ready to rip the country apart. On this we all could agree.

“Those of us who watched the lunar voyage of Apollo 11 were transfixed as we saw the first men walk on the moon and return to earth. Superlatives such as ‘fantastic’ and ‘incredible’ were inadequate to describe those eventful days,” Stephen R. Covey wrote in “The 7 Habits of Highly Effective People.”

The late management guru noted how difficult it was for the Apollo 11 astronauts to break out of the earth’s tremendous gravity to begin their journey.

I recently started reading Covey’s 1989 classic after writing about how it has been adapted for “The Leader in Me” program that started at Gossler Park Elementary School four years ago and will be expanded to all public schools on Manchester’s West Side this fall. I thought I had read it before, but soon realized I had confused that with hearing so many people use lingo like “win-win” and “proactive” over the years.

I didn’t expect to find a reference to Apollo 11. Covey used it to illustrate how difficult it is to break long-time habits to achieve great results in our personal and professional lives. The overall message of his work, now more than 30 million copies sold, is how much we can achieve when we pool our talents and resources, how interdependent we all are upon one another for survival and success.

The decade-long quest to put humans on the moon -- before Russia could -- was the work of thousands of people working all over the country. In New Hampshire, that included Sanders Associates, the Nashua company that would become part of BAE Systems, as correspondent Kimberly Houghton chronicles on this page.

Interest in the space program has waxed and waned over the years. Do we really need to keep exploring the moon? Weren’t we supposed to be landing on Mars by now?

In the mid-’90s, space fever returned after director Ron Howard captured the drama of a rescue mission in “Apollo 13.” I remember a science writer friend complaining about how we were celebrating one of NASA’s near disasters rather than its many successes. The blockbuster film reignited the public’s interest in space, if only for a year or two.

During that period, my editor at the Naples Daily News in Florida sent me and a photographer to cover a launch of the space shuttle Discovery. We didn’t think there was anything particularly significant about this launch; we just wanted a good feature story for the front page.

Looking back at my yellowed copy of that edition all these years later -- published on July 14, 1995, exactly 24 years ago today -- I reread a piece of that story that I had forgotten about. Mostly, photographer Kim Weimer and I had focused on finding local people among the hundreds who had traveled to Kennedy Space Center in Cape Canaveral to witness the launch, a massive early-morning tailgate party that lasts for hours for something that flashes before your eyes in a few minutes.

Like them, Kim and I were there to watch the show. But the chief job of the five Discovery astronauts -- three men and two women -- during their eight-day mission was to deploy a $330 million communications satellite. It was NASA’s second attempt, coming nearly a decade after one of the saddest days in U.S. history.

The satellite was to replace one lost in 1986 when the shuttle Challenger exploded and “cast a long shadow over the U.S. space program,” I wrote.

As Stephen Covey says about how we felt when we watched Armstrong take those first steps on the moon, those words were inadequate to describe the national tragedy that took the lives of Challenger’s seven crew members, including New Hampshire school teacher Christa McAuliffe, the first private citizen in space.

As we celebrate our heroes who flew to the moon and back, remembering those who did not return from their mission underscores how great achievement almost always involves great sacrifice.

Back then, in the ’60s, rocket scientists were the baddest dudes of innovation. Just the title was about the highest brainiac accolade that co…

NH's Shepard was grounded for historic lunar landing, but his time would come

The late Alan Shepard of Derry became the fifth person to walk on the moon and at 47 the oldest ever, but his closest observers maintain this …

Back to the moon: NH's Lee Morin is working on Orion, NASA's next lunar spacecraft

Lee Morin was a teenager when Neil Armstrong took that “one giant leap for mankind” onto the surface of the moon. He grew up to become a Navy …