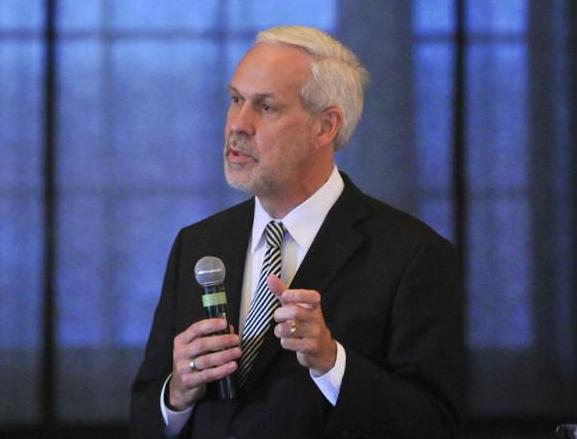 It was an offer too good to pass up. Southern New Hampshire University would team up with Salesforce to create a program that offers college credit for coursework completed on the company’s Trailhead platform.

Launched in 2014, Trailhead is an online learning platform that provides tutorials about coding in the Salesforce platform, a customer relationship management (CRM) tool used by businesses worldwide to analyze data. SNHU is working with Salesforce to allow users to earn college credit by completing admin and developer badges.

Trailhead fits with SNHU’s vision of higher education — one LeBlanc says is “more of an ecosystem than the idea of individual institutions” — and recognizes that students learn in a variety of ways.

“This is a great example of earning a badge that has a great deal of demand and currency in the workforce,” LeBlanc said during a phone interview last week after the partnership was announced. “Salesforce is a widely used platform in many, many ways.”

While CRM attracts people eyeing careers in information technology, LeBlanc believes those coding skills will be useful in multiple disciplines.

“We think it’s useful for somebody in marketing and business and in general,” LeBlanc said, even English majors: “It makes them more marketable. We’re excited about it. It’s free. We kind of have a relentless desire to drive down the cost of education to students so this partnership is one piece of that effort.”

In a low unemployment era — when companies are increasingly looking for new ways to find employees — the program offers students the chance to gain skills that companies want.

“This is a great example of a high-demand skill. It’s a demonstrable competency. Employers value it,” LeBlanc said. “Anybody who has it is going to have one more sort of arrow in their quiver in terms of being competitive in the job market.”

SNHU and Salesforce began talks a couple of years ago after the company learned about the work the university was doing to develop degree programs for refugees. That led to a meeting at Saleforce’s San Francisco headquarters.

“When we sat, we shared our vision for building out ecosystems that could help more learners around the globe. And that got us thinking about Trailhead, and this pretty amazing set of platforms for learning that Salesforce had created,” LeBlanc said. “Can we leverage that? Can we put it to work in some way? So that became the conversation.”

Trailhead is a self-based platform that allows users to learn at their own pace.

“You go on and complete the modules, and you gradually build up to Superbadges. Superbadges are pretty rigorous, college-level work,” LeBlanc said. “It’s for the Superbadges that we will be giving college credit.”

SNHU will treat the Superbadges similar to transfer credits from other colleges.

“We know exactly what it’s worth and plug it right into your program if you’re a student coming into SNHU or are already at SNHU working toward a degree,” he said.

SNHU is ranked No. 2 among nonprofit online educational institutions by Nonprofit Colleges Online. Since its ascent to the upper ranks of online learning over the past decade, SNHU has become known for its rapid growth and rapidly expanding revenues — some of which it has used to pay for more buildings at its flagship Hooksett campus and its operations in downtown Manchester in the Millyard, where it recently completed a 1,700-space parking garage.

LeBlanc sees the online and brick-and-mortar locations as parts of a whole that offer different ways to reach students.

“We now have online students who come from all around the country to the campus in Manchester, and they do low-residency short stays. We have more and more of our traditional students who live on campus taking online courses,” he said. “I think all these distinctions we made about our student types and where they learn are starting to disintegrate. We just think of students, and we want to curate their learning in whatever way makes the most sense. Sometimes it’s place-based, like on campus. Sometimes it’s online. And oftentimes it’s a mix and a hybrid of the two.”

As the school adds new degree programs, those hybrids are increasingly coming into play.

“If you look at our new engineering program, for example, they’re not asking only, ‘How do we serve an 18-year-old living on campus?’ They’re asking the question, ‘How do we serve all students?’ ” LeBlanc said. “And then, ‘In what ways is the campus sometimes useful in that mix?’ So the campus becomes a much more flexible tool in a pretty broad tool kit.”

When Melody Roberts moved from Hyde Park, on the South Side of Chicago, to the north shore suburb of Wilmette with her son Jason Pereira, 16, she said there were a number of theories floating around the neighborhood: One was she was secretly getting divorced from her husband of 27 years. Ano…

From Fish & Game: Rev up for snowmobile season

Winter can be a difficult time to get outside, what with the colder temperatures and limited hours of daylight, but snowmobiling is a great way to get some fresh air and enjoy an outdoor adventure. Snow cover has been limited in parts of the state, but the North Country has been seeing some …

ROCHESTER — Emergency rescue crews extricated a driver who was trapped inside his vehicle after it struck a concrete barrier at the Spaulding Turnpike tolls in Rochester on Thursday.

The man arraigned Wednesday in Massachusetts on charges he murdered a Leominster, Mass., woman late last year is also wanted on criminal charges in Keene.

MANCHESTER — Angie’s Place, the former women-only shelter operated by New Horizons, will be converted into small apartments that will be leased out to homeless people under the Housing First model, leaders of Families in Transition said Tuesday.

“Utter shock” rippled across the College of the Holy Cross campus in Worcester, Mass. as students and faculty learned of the tragic Florida crash that took the life of star rower Grace Rett and injured 13 others Wednesday morning.