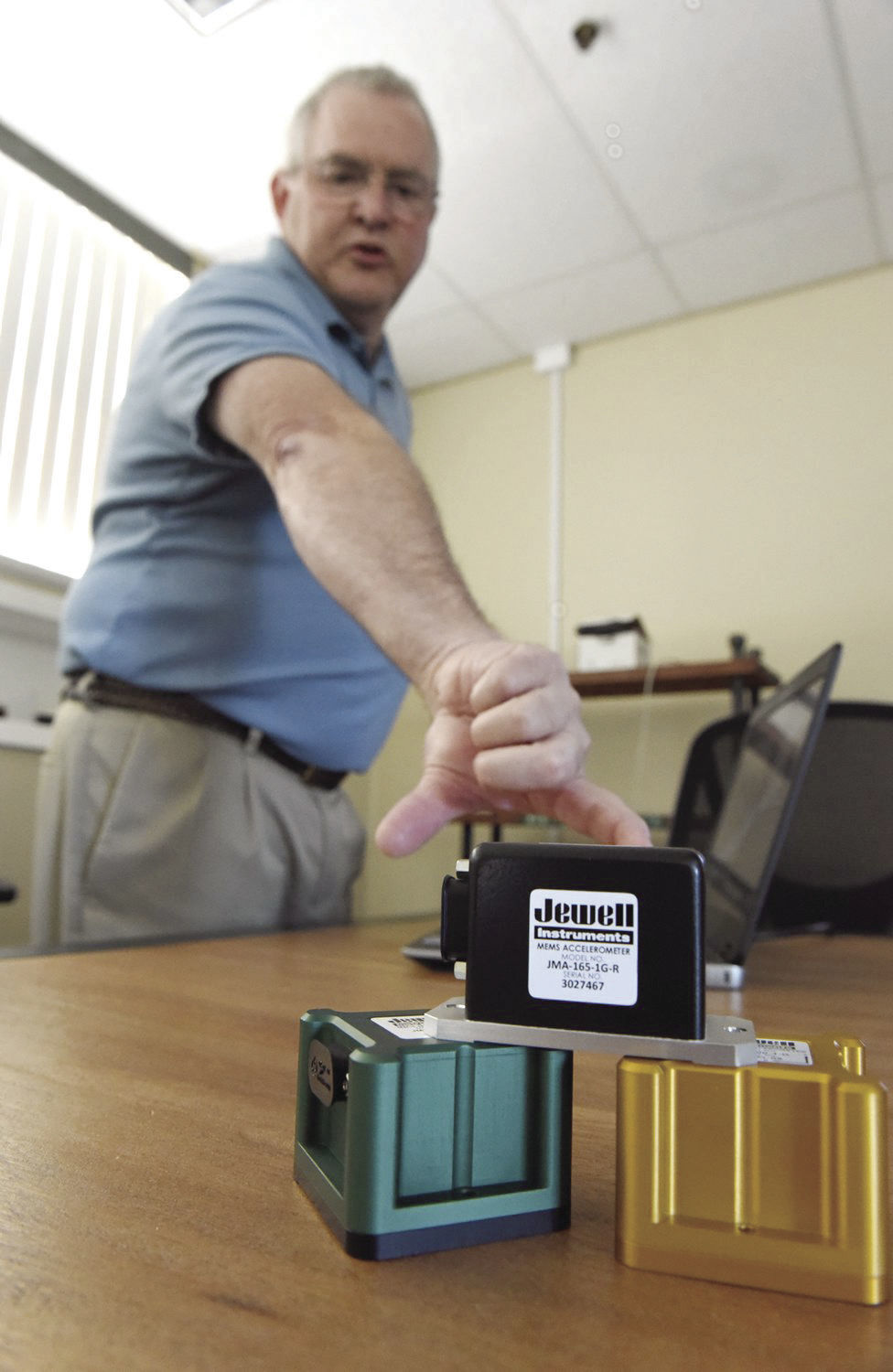 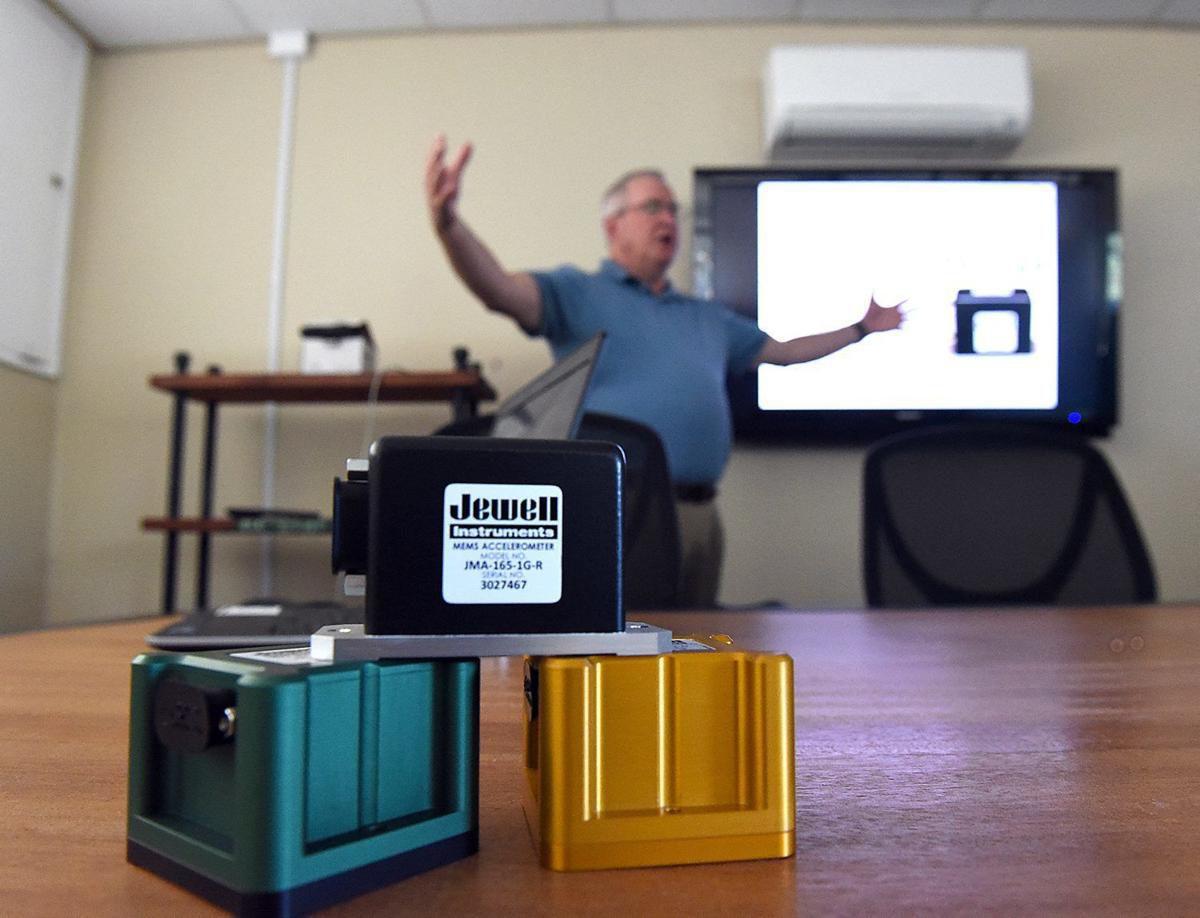 Brian Ward, vice president of sales and marketing for Jewell Instruments, demonstrates the Manchester company's RailStar accelerometer (pictured in the foreground) at the company's headquarters in 2016. The device provides train acceleration, deceleration and position information for rail cars.

Brian Ward, vice president of sales and marketing for Jewell Instruments, demonstrates the Manchester company's RailStar accelerometer (pictured in the foreground) at the company's headquarters in 2016. The device provides train acceleration, deceleration and position information for rail cars.

For the past several years, Jewell Instruments in Manchester has increased its sales overseas, riding a trend for businesses in the Granite State.

The company reports about 50% of its business comes from Asia and Europe, mostly from precision sensors and controls used in high speed trains. About 32% of business is done in China, according to Brian Ward, vice president of sales and marketing.

“We’re growing that percentage every year,” he said of the company’s international business. “The 50/50 mix between the Americas and the rest of the world is a good mix for a smaller business.”

Businesses across the Granite State have also seen an increase, with state officials reporting a new record for exports — for the third year in a row. Last year, global trade topped $5.8 billion — up 10% from 2018, according to federal trade data. The top trading partners are Germany, Canada, Ireland, Mexico and Japan.

While growth is up across the board, trade with China decreased 20% mostly due to tariffs imposed by President Donald Trump, according to state officials. China ranked No. 6 on the list.

The state is working to further increase international trade, including an executive order signed by Gov. Chris Sununu to establish the U.S.-Mexico-Canada Agreement Trade Council to encourage trade with those two North American countries.

“We want to be part of that world market,” said Wildolfo Arvelo, director of the division of economic development at the state Department of Business and Economic Affairs. “I think in order for us to continue to grow, we have to play there.”

Global trade faces challenges with conflicts, international financial decisions such as Brexit in the United Kingdom, natural disasters, tariffs and the spread of the coronavirus.

The virus outbreak is being blamed for the worst drop in global stocks since the 2008 global financial crisis. The largest hit will be the global supply chains, according to Bruce Elmslie, professor of economics at the University of New Hampshire.

Jewell Instruments hasn’t been hit by the ripple effect of the virus and closed factories in China, Ward said. The company was able to ship out a significant amount of product before the end of last year.

While only about 8% of the state’s gross domestic product comes from exporting, it’s a growing segment of the overall economy as part of the global supply chain, Elmslie said.

“It is becoming more important as the state has tended to open up more toward attempting to bring in more manufacturing that are traditionally traded internationally,” he said.

Ninety-five percent of consumers are outside the U.S., presenting opportunities for companies in the state to sell in other markets and create more jobs, said Tina Kasim, program manager for the Office of International Commerce.

“The more interest and demand that we create for our companies and solutions for different issues, the more demand there is for jobs to keep up with those orders and those sales coming through,” she said.

Exports supported about 19,000 jobs in 2016, the latest year available, according to the Office of the United States Trade Representative.

“These are good paying jobs,” Elmslie said. “Typically, the companies that do a lot of exporting pay higher wages than those who don’t. It mostly has to do with the products they are exporting.”

Jewell employs about 105 workers in Manchester.

Kasim said a combination of factors played into the state’s record growth over the past three years, including a strong economy.

“The businesses are the ones doing the hard work. They are the ones getting out there and developing the market channels,” she said. “Between state resources and federal resources we are helping companies identify new market and distribution channels.”

“Exports of aerospace parts, industrial machinery, electronic components and other manufactured goods bring new dollars into the state’s economy and generates positive economic activity, including stronger wages, that would otherwise not exist,” he wrote in an email to the Union Leader.

The state encourages companies to look outside of the U.S. to balance revenue streams, Kasim said. Diversification helps companies establish alternative markets when “a storm hits” in one market, she said.

“When things slow down in one part of the world chances are they will be busy in another part of the world,” she said. “Rather than having one client in the domestic U.S. market, like the Department of Defense let’s say, you can think about expanding your product into other markets.”

“There are ups and downs in different times, so you try to even out in the marketplace in a lot of different areas,” he said.

Several companies, including GE Aviation in Hooksett and Albany International in Rochester, produce components for the LEAP jet engine used on the Boeing 737 MAX, and were hit by the halting on the American aircraft’s production at the end of last year. Both also produce parts for Boeing’s European competitor, Airbus.

Tariffs have forced firms to be less reliant on single-suppliers, such as China, Elmslie said.

The export levels increased by $1.6 billion or 41% between 2008 and 2018, according to the federal Office of U.S. Trade Representatives.

For Jewell, the company has launched several new products in the aerospace market, Ward said.

“That will not just have an impact domestically, but globally as well,” he said.

“Everything we are seeing in the news has a role in how our companies are doing when it comes to exports,” she said.

“We are waiting and seeing, like everyone else is,” Kasim said.

Arvelo said the U.S.-Mexico-Canada Agreement, which is seen as a political victory for Trump, is set to better align the three countries for trade.

“That could potentially lead to increased trade, or at least that is the hope,” he said.

It can be a tough process for companies to break into the international market, but the state and federal governments have resources available for businesses. The Office of International Commerce is hosting an export boot camp seminar in April to assist business looking to enter the global market.

One big challenge is finding the right workers to fill the need, which many other industries are struggling with across the state. Automation might help will the need in the future, Arvelo said.

State officials say companies across the state are also becoming known for innovation.

“The hope for us going forward is we’ll continue to produce companies and products that will be exported internationally and keep our economy humming along for the next 10 or 20 years,” Arvelo said.

LONDON (Reuters) - The dollar rallied against riskier currencies on Wednesday, with markets staring at what looked likely to be one of the worst economic contractions in decades as the world confronts the coronavirus pandemic.

NEW YORK/WASHINGTON (Reuters) - As soon as New York officials began detailing their response to the coronavirus, Matt Preis knew his staff might be in trouble.

MANCHESTER — Management at the Puritan Backroom restaurant has announced the popular Manchester eatery will temporarily close at the end of business Wednesday, April 1, to allow for repair work following a kitchen fire at the restaurant last week.