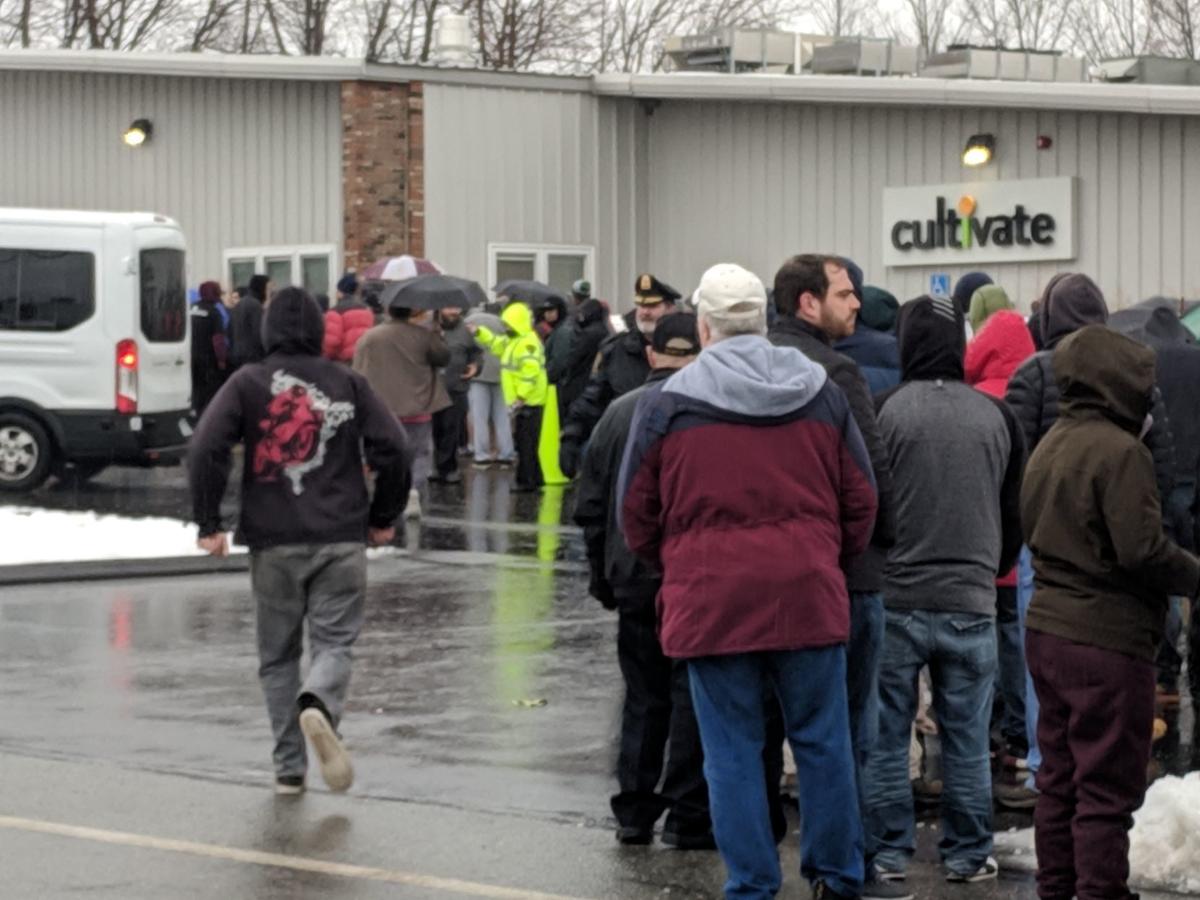 {span}A customer runs toward the front of the line outside Cultivate, in Leicester, Mass., one of two dispensaries in the state that began selling recreational marijuana on Tuesday.{/span} 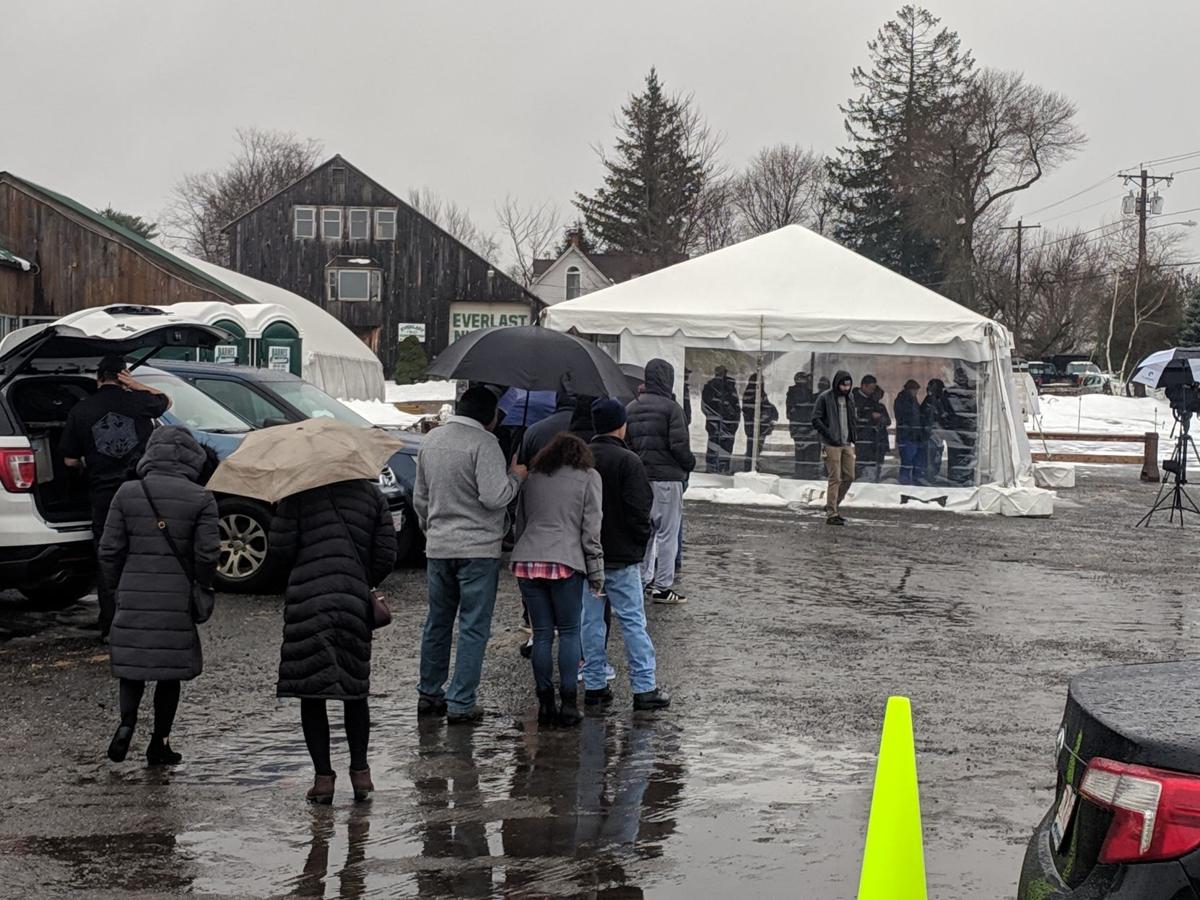 {span}Dozens of people waited in a muddy parking lot underneath freezing rain for shuttle buses to the dispensary.{/span}

{span}A customer runs toward the front of the line outside Cultivate, in Leicester, Mass., one of two dispensaries in the state that began selling recreational marijuana on Tuesday.{/span}

{span}Dozens of people waited in a muddy parking lot underneath freezing rain for shuttle buses to the dispensary.{/span}

LEICESTER, Mass. — Hundreds from across New England made the pilgrimage Tuesday to Leicester, Mass. and most were in a cheerful mood, happy to endure the driving rain and long lines.

Legal pot had finally arrived on the East Coast.

Like others from New Hampshire interviewed for this story, a man who identified himself as “Tom” asked that his last name not be used because pot prohibition remains in effect in the Granite State.

“I was here at 7:30 a.m.,” said Tom, who lives in Strafford County, as he walked through the muddy parking lot at Everlast Nursery about 9:30 a.m. He headed to the queue that had formed for the shuttle to transport customers the half-mile to Cultivate, one of two dispensaries that began selling recreational cannabis Tuesday.

“They’re saying that there’s a couple more hour delay, but I don’t believe that. I think it’ll be a little bit less than that,” Tom said. “I think they’re just trying to get rid of people.”

Some would-be customers did leave empty handed in frustration. Yet most persisted, waiting four hours or more in dismal weather.

The staff at Cultivate, which had been a medical-only dispensary before Tuesday, were doing the best they could to keep the lines rolling, said Ryan Green, an employee there. The shop opened at 8 a.m. By 10 a.m., about 400 people had already been served and there were about as many waiting.

“Even since we opened for medical this has been the goal — to be one of the first (recreational dispensaries) on the East Coast,” Green said. “To be the first, on this day, it’s something special.”

Like the vast majority of the crowd that descended on a normally peaceful stretch of Massachusetts’ Route 9, Darren, from Rockingham County, had other ways to buy marijuana without driving for several hours only to wait in line several more. So why do it?

“Why not?” Darren said. “It’s the first day. Everyone who’s here doesn’t need to be here.”

It was the spectacle of the occasion that drew him, Darren said, and his belief that New Hampshire — the Live Free or Die state — is very likely to be the last New England state to legalize recreational marijuana.

While their purchases were legal, the Granite Staters at Cultivate were still poised to break the law if they transported their goods across the state line.

“Nothing has changed here in New Hampshire. Marijuana is still illegal here,” he said.

Possession under three-quarters of an ounce has been decriminalized; anyone caught with more than that faces a misdemeanor charge that carries a $350 fine and up to a year in prison, he said.

But Encarnacao said state police are not staking out the border.

“It’s not something that we’re focused on. We always have our concerns for impaired drivers — which could be drugs, could be alcohol, or a number of different things — but we’re not targeting anybody,” he said. “We’ll wait and see what it brings. We don’t have any strategy right now or any plan that we’re unveiling.”

More recreational dispensaries will open in Massachusetts in the coming months. Maine and Vermont are already on the path toward recreational sales in the next few years.

So far, efforts to legalize the drug in the Granite State have been stymied, but momentum is growing.

Earlier this month, a legislative commission set up to study the potential effects of legalizing recreational marijuana sales released its final report.

The document — which did not get a seal of approval from all the commission members — stated that it is time for New Hampshire to take the “next step” in its marijuana policy.

Taxing recreational sales could bring up to $57 million a year into state coffers, according to the report.

The turnout in Leicester on Tuesday was evidence of how high the demand for legal weed is in the region, and beyond. License plates from as far away as Florida and Texas could be seen in the various parking lots set up to handle the first-day shoppers, although it was unclear if the drivers traveled to Massachusetts just for the marijuana.

Elizabeth, a nurse from Massachusetts, said she hasn’t tried marijuana in many years.

“For a long time, I didn’t smoke because there just wasn’t any accessibility and nobody knew what was in” marijuana sold on the black market, she said.

As she held a small brown bag containing pre-rolled joints and a grilled cheese sandwich from a food truck that was set up outside Cultivate for the occasion, Elizabeth said it’s a relief this day has finally arrived.

“You walk in there and it’s like nirvana,” she said.