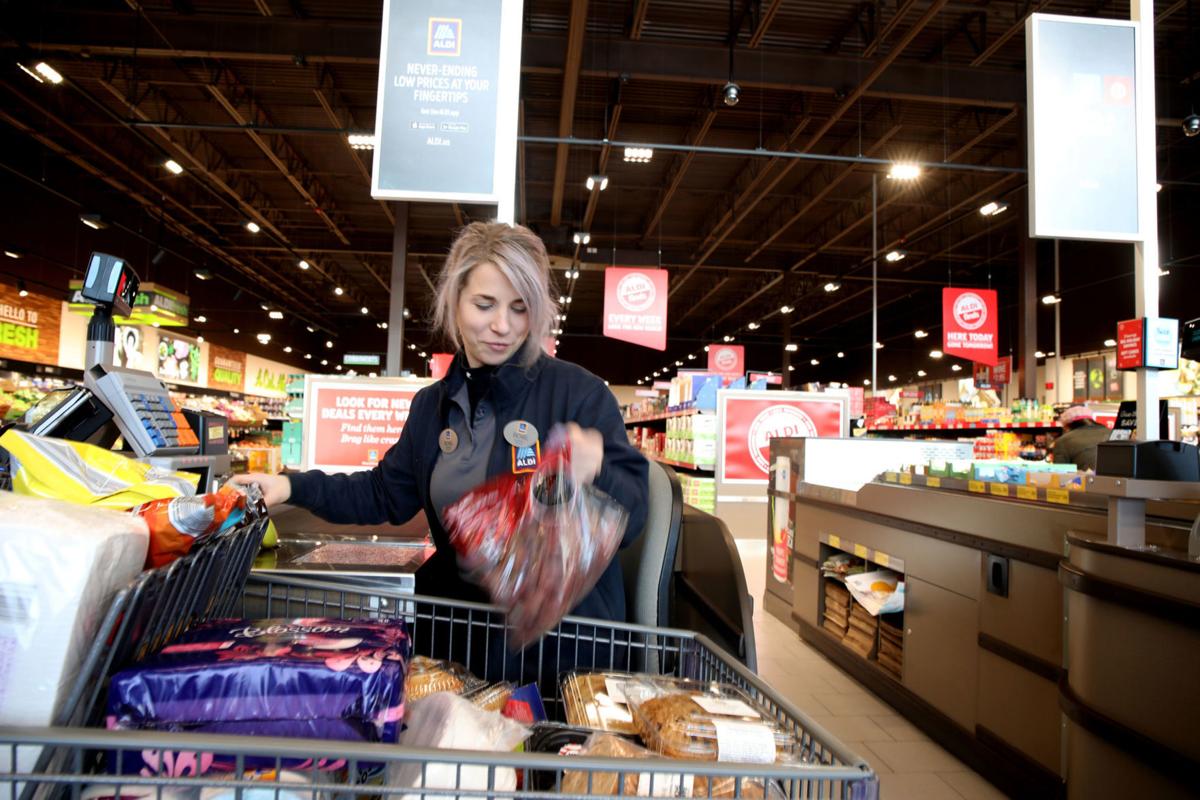 Manager Rachael Campo checks out a customer and loads the food into a cart at the register at Aldi in Downers Grove, a suburb of Chicago. 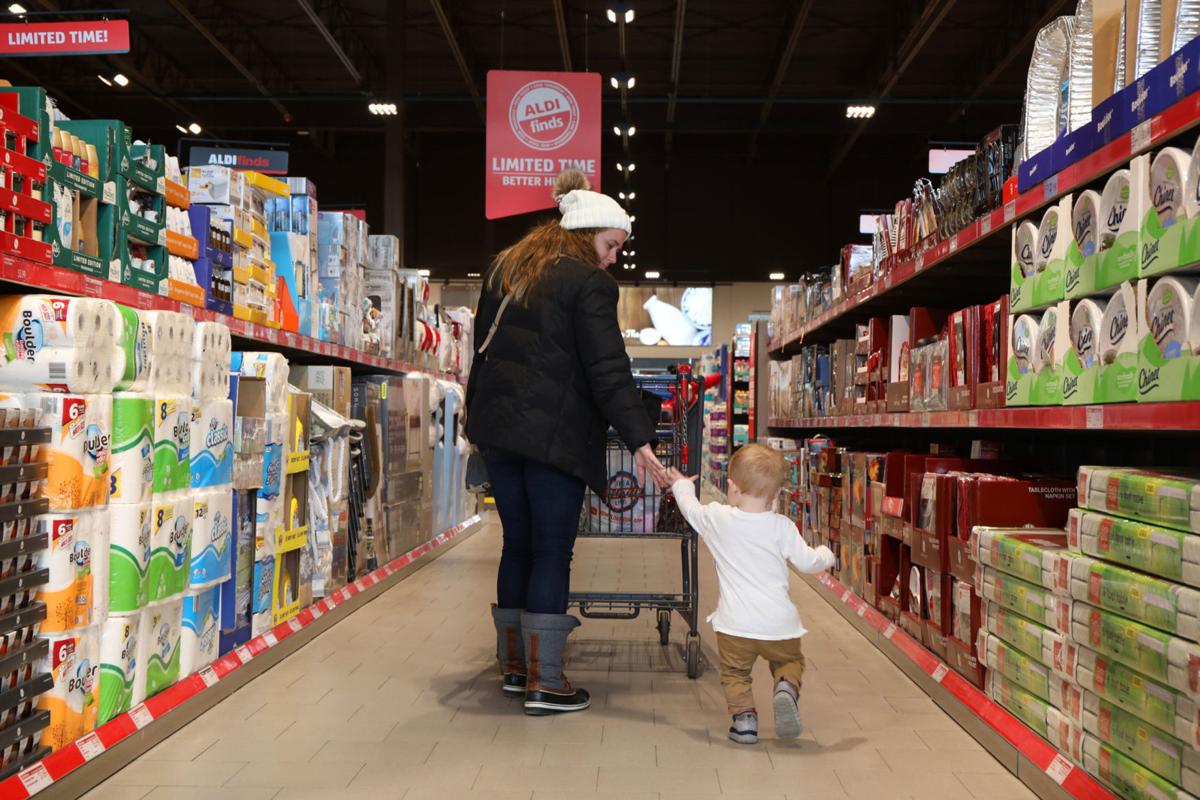 Maggie Calder holds the hand of her 1-year-old son, Declan Calder, as they shop the aisles at Aldi on Nov. 14, in Downers Grove, a suburb of Chicago.

For years, Amber Walker held a dim view of Aldi, the discount grocer whose U.S. headquarters sit just a mile from her home in Batavia, Ill.

She associated it with dented 10-cent cans and no-name brands. She did not understand why, of all things, it also sold hammocks.

But Walker’s negative perception swiftly changed after her first visit to Aldi in decades in 2016, when the chain started accepting credit cards, and she found not the dingy floors from her childhood memories but a budget Shangri-La.

She could buy a week’s worth of groceries for her family of four for less than $100, and discover treasures in an aisle dedicated to random rotating items that “I don’t need but can’t live without.” Aldi, at least in Walker’s eyes, got even better when it broadened its limited selection to include more fresh, organic and high-end products — still at steep discounts — while undergoing an aggressive national expansion and chainwide remodeling blitz. Walker’s store in Batavia, renovated in 2017, even got a bakery.

As a spruced-up Aldi climbs toward its goal of having 2,500 stores by 2022 — which would make it the third-largest grocer in the nation by store count — converts like Walker are putting aside old perceptions of the brand and embracing the no-frills ethos that allows Aldi to sell quality products for cheap. Though behemoths like Walmart and Kroger dominate the market, analysts say the companies are watching their backs as the German-born chain reshapes expectations of the shopping experience.

“I’m always shocked at what I can get for the cost,” said Walker, 37, an animal trainer who previously did her regular shopping at Walmart, Meijer, Costco and Super Target. “Aldi gets my business first, and then I will fill in holes elsewhere.”

Known for cost-saving measures such as requiring customers to bag their own groceries and pay a quarter deposit to access a grocery cart, Aldi says its customer base has swelled as it modernizes its digs and broadens its selection to include items like fresh salmon, organic strawberries and artisan cheeses.

At remodeled stores, which have been expanded to fit a bigger produce and fresh foods section, customer traffic has increased by 30% to 40%, said Scott Patton, vice president of corporate buying.

“The more variety of products we carry, the more customers view Aldi as a place they can do their first shop of the week,” he said.

While shoppers still have to go elsewhere for fresh ginger or water chestnuts or organic tofu — though Aldi is testing the latter — and can’t get a single lime without buying a 1-pound bag, Patton said Aldi should cover 90% to 95% of their grocery list.

Aldi, which had 1,600 stores in 2017 when it announced its $5.3 billion expansion and renovation plan, is ending the year with nearly 2,000 stores in 36 states. That includes 160 in the Chicago area, its largest market by store count. Aldi operates eight stores in New Hampshire, including Manchester, Nashua and Salem.

Though the privately held company does not release financials, Supermarket News estimated its revenues last year at $18.4 billion, up from $16.8 billion in 2017, . Its national market share is just 2%.

Karen Short, an analyst at Barclays, called Aldi’s stores “ankle biters with respect to the overarching impact” on the industry, siphoning off just a trip here or there from the competition.

But Aldi is setting a standard for low-priced, high-quality goods that is keeping its larger rivals on their toes.

Walmart benchmarks its prices against Aldi’s, setting them a few percentage points higher because the mass merchandiser has the advantage of more products, Short said.

Walmart’s then-U.S. CEO Greg Foran called Aldi a “fierce” competitor that is not to be underestimated.

At Aldi, 90%% of the product selection is private label.

Patton, a 24-year veteran of Aldi, said he takes the competition’s interest in its business model as a compliment and a sign that the grocer, which opened its first U.S. store in Iowa in 1976, is doing something right. He isn’t concerned anyone will out-Aldi Aldi.

”Our whole company is based on efficiency, saving money and doing things better and faster than anyone else can,” Patton said. “So as they’re chasing us, we continue to innovate and we’re moving the ball. We’re not standing still.”

As she paused her cart in front the dairy case at the Aldi in Downers Grove, longtime customer Megan Quattrochi said she feels prices have gotten cheaper compared with other grocery stores even as the experience and product selection have improved. She pointed to a half gallon of Aldi brand Simply Nature organic almond milk, priced at $2.69, which she surmised would cost double somewhere else.

Quattrochi, 36, said she has always trusted Aldi for its produce but has been pleased to “watch it go from your basic stuff to a full-grown grocery store.”

”I feel it used to be tailored more towards lower- to middle-class,” said Quattrochi, who lives in La Grange. “It’s gone to being tailored to everybody.”

In a report last year, Morgan Stanley said 1 in 5 customers who recently switched grocery stores took their business to Aldi, a greater share than opted for Costco, Kroger, Target and Whole Foods. Walmart, the market leader, got 30% of switchers, but that was flat from the prior year while Aldi’s share was up significantly.

Nearly half of Walmart stores, and more than half of Krogers, are within 5 miles of an Aldi as the discounter elbows into their territory, the report said. Aldi is vying for shoppers online as well: Last year it rolled out a chainwide grocery delivery partnership with Instacart, and last month added same-day beer and wine delivery. Twenty percent of its delivery customers had never been to one of its physical stores before, suggesting it’s finding new audiences, Patton said.

Simon Johnstone, director of retail insights at Kantar Retail, credits Aldi’s success to its patience in slowly introducing its brand to American consumers over more than 30 years, first building awareness about price, then quality, and more recently the treasure hunt aspect of its rotating bargains. By contrast, Lidl, another German discount chain that’s rolling out stores across the East Coast, jumped in too quickly without educating consumers and has scaled back ambitious expansion plans, he said.

The danger, as Aldi refurbishes and peddles fancier fare, is that some consumers will assume prices are going up as a result and think twice about whether it’s still their best option, Johnstone said.

Patton said the company will never compromise its price advantage. As it tests bakeries in a handful of stores, churning out fresh baguettes daily, it is assessing whether the consumer demand is worth the cost.

”It’s absolutely the most efficient bakery you’re going to find, but bakeries are inherently inefficient,” he said. “So we don’t know. What we don’t want to do is raise prices to pay for it.”

From use of shelf space to package design, dozens of cost-saving details allow Aldi to keep prices low, Patton said. For example, each product has a bar code on each side of its package so cashiers can scan items quickly. The company recently took two years to develop a new milk bottle and transporting system that swapped out metal for polystyrene crates, allowing it to get more milk on a single truck because it weighs less, which saves on transport costs.

The limited selection — think five types of olive oil rather than the 35 to 50 found at a typical supermarket — is also key to Aldi’s cost structure because it can keep stores small. At 12,000 square feet, the average Aldi is a fraction of the size of supermarkets that tend to run from 40,000 to 150,000 square feet, saving it on rent, taxes and energy costs, Patton said.

Stores need fewer employees, and they are cross-trained so that they are never idle.

”They can run the register, refill produce, run the bakery, restock milk — anything that needs to be done in the store, anyone can do,” Patton said. “That’s real efficiency.”

Aldi historically has been just as focused on good quality as low prices, though many outsiders don’t have that perception. “They think it can’t be as good quality if it’s so cheap,” Patton said.

Walking through the Downers Grove store, Patton picks up a newer product, a “dessert hummus” from its private label Park Street Deli brand, which combines chickpeas, coconut oil, sugar and cocoa powder to create a $2.99 dip that tastes like brownie batter. Working with its supplier and Aldi’s test kitchen in Batavia, where some 60,000 products are sampled each year, the company went through 10 to 15 iterations before it found the right formulation, he said.

It was similarly thoughtful in creating its only two ketchup options — regular and organic — which Patton said could easily have been made cheaper by using fewer tomatoes and more water. But if consumers don’t like it, they won’t come back — no matter how much they saved.

”If the quality isn’t there, the price doesn’t really matter,” he said.

Cindy Koerner, 62, was impressed by the quality of Aldi’s products when she started shopping there about seven years ago because she moved and it was convenient. For years, she had disregarded Aldi as an option because she thought it was a low-quality place where people went because they couldn’t afford to go anywhere else.

Koerner, who lives in Arlington Heights, has found she likes bagging her groceries herself, because she knows exactly what’s in which bag, and most of all appreciates how quickly she can get through her weekly shopping trip because there aren’t so many choices.

In a recent survey of Aldi shoppers, Kantar Retail found speed was central to Aldi’s appeal. Survey respondents said it was 20% faster to shop at Aldi than at other stores.

They also said shopping there was fun. The report traced the fun to Aldi Finds, an aisle that features 50 to 60 new items each week, often pegged to the season. Recently shoppers could find a $29.99 cast-iron dutch oven and a pair of dining chairs for $90.

Walker, the Batavia woman and Aldi convert, looks forward to journeying through that aisle, better known as the “aisle of shame” on the Aldi Nerds Facebook group she belongs to, because of its temptations.

She found her now-favorite pair of lounge pants there, as well a granite countertop island on wheels that she simply does not need. She checks it regularly for kids stuff, and her princess-obsessed daughter has benefited from the licensed Disney products that occasionally show up there.

Walker is so smitten with the Aldi experience that she has written a children’s book about the journey of a grocery cart quarter as it exchanges hands; it features recipes using Aldi products on each page. She hopes to self-publish after completing illustrations.

For all the Aldi nerds out there, however, there are plenty of people who prefer a more robust grocery experience. Aldi does not have prepared hot foods or in-store dining options or butcher counters that shoppers value elsewhere.

At least, not yet.

”Would we ever have a piano player, a sushi bar or juice bar?” Patton said. “I would never say never. But I would say this: If we ever had any of those things, it would be the most efficient of our competitors, and we would do it better and faster than anyone else.”

Filings for U.S. unemployment benefits increased for a second week, though remained near levels signaling that the labor market is historically tight.

Sorry, there are no recent results for popular images.