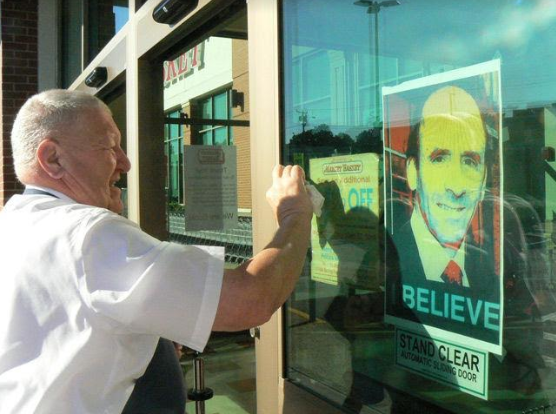 Market Basket employee Jim Blais at the Manchester store cleans a window with the poster of restored-CEO Arthur T. Demoulas in late August 2014 after the six-week dispute had ended.

Then Gov. Maggie Hassan and Market Basket CEO Arthur T. Demoulas, center, greeted employees and customers at the Londonderry store after the six-week walkout was resolved.

LONDONDERRY — Five years ago this week, employees and customers declared victory after a six-week standoff that forced executives of Market Basket to reverse the firing of the grocery chain’s popular CEO.

Then governor, U.S. Sen. Maggie Hassan, D-NH, had a bird’s-eye view of this unprecedented show of employee and consumer clout.

Hassan was part of a four-hour, private negotiating session with the warring cousins at the top of the Demoulas family that owns the chain.

The summit on Aug. 17, 2014, was at the home of then-Massachusetts Gov. Deval Patrick in the Berkshires.

Insiders maintain that the ownership team led by Arthur S. Demoulas, which had fired Arthur T. Demoulas as CEO, realized after that meeting they had to allow Arthur T. to buy back control of the company — for a reported $1.5 billion — or risk losing the entire franchise.

Over the six weeks of the dispute, Market Basket had lost 90 percent of its customers and nearly all its rank-and-file work force left the job in protest of Arthur T.’s firing.

“That’s what makes this story so compelling and unique because we don’t often see this in the corporate world today,” Hassan said. “Again it was the power of the employees and the customers understanding that Artie T’s leadership had true impact and consequences in creating a community of grocery stores that was much more than grocery stores to people.

“They were going to stand up for the community they believed in, and it was a great example of what that kind of action can accomplish.”

A few days after the deal, Arthur T. Demoulas greeted Hassan and employees at the Market Basket in Londonderry with hugs for their roles in making the buyout possible.

“It was very clear to me when Market Basket reopened, how exciting it was for people to experience that level of community again,” Hassan said.

Hassan was making plans to visit and reminisce with those Londonderry employees this week.

Before becoming governor, Hassan was an experienced litigator in the field of labor-management negotiations. She said she was struck by how bitter this family feud had become.

The two Arthurs openly said in court and in public that they hated each other.

The loathing stemmed from Arthur S. charging that Arthur T. had stripped control away from the company after Arthur S.’s father died.

Arthur S. sued in court to get back his side of the family’s share of the company in the 1990s.

“The frustration and the tension between those two cousins was palpable when we met with them, but they also had teams with them, groups of people who were trying to find a solution,” Hassan said. “They were very effective teams.”

2014 was an election year, and a group of 17 elected officials called for a boycott of Market Basket.

Employees staged five rallies in support of Arthur T. The largest, on Aug. 5, 2014, drew 10,000 workers and supporters outside the Stadium Plaza Market Basket in Tewskbury, Mass., the company’s headquarters town.

For many people, grocery shopping is mostly habit.

Shoppers depend on dependability, knowing where to find items, and prices that don’t break their budgets.

Turning their backs on Market Basket meant going to unfamiliar stores and probably paying more for their groceries.

But that’s what shoppers did. Hassan recalled that as the fight dragged on, many of her constituents were getting antsy for a solution.

“I think what was clear to me was the level of impact that the dispute was having throughout New Hampshire,” she said. “Businesses, suppliers, vendors — they were all affected,” Hassan said.

The grocery store soap opera dominated the news for weeks and consumers became obsessed with it, Hassan said.

“I can remember talking with a waitress in Portsmouth who was worried and asked me, ‘Governor, when will Market Basket get up and running because I depend on it to afford to buy my groceries every week,’’’ Hassan said.

“I got that question all over New Hampshire wherever I would go.”

Market Basket is not unionized, and industry analysts said the loyalty of workers to Arthur T. was repayment for his attitude toward them.

All Market Basket employees received generous benefits, including participation in a profit-sharing program and a scholarship program for employees in college.

The company had a reputation for promoting from within at all its 71 stores, and at the time of the walkout, many in upper management had been there for decades.

When employees refused the new management’s order to return to work or lose their jobs, mass firings of employees on July 20 moved Hassan and Patrick to organize the summit with the principal players.

“I am very grateful to my colleague, then fellow Gov. Patrick, because as I talked to him about the impact to his state as well, we both thought there might be ways we could help the two warring sides of the family to come together for the greater good,” Hassan said.

Jay Childs of Portsmouth made a documentary film titled “Food Fight: Inside the Battle for Market Basket” which told the story from the viewpoint of the workers.

“Really, I think what you see in our film is how far people are willing to step outside of their comfort zone, and step outside of themselves to fight for something that they see as threatened,” Childs said in April 2016, after the documentary’s debut. “And in this case, it was not just the firing of Arthur T. (Demoulas), but it was their company and their culture and really their way of life.”

Hassan said history may not fully comprehend how close this CEO showdown came to killing the company.

“Certainly I think all of us were really concerned about that at the time,” Hassan summed up.

“The collective action of employees and customers forced the issue. I credit both sides with being willing to work together to get to a solution.”