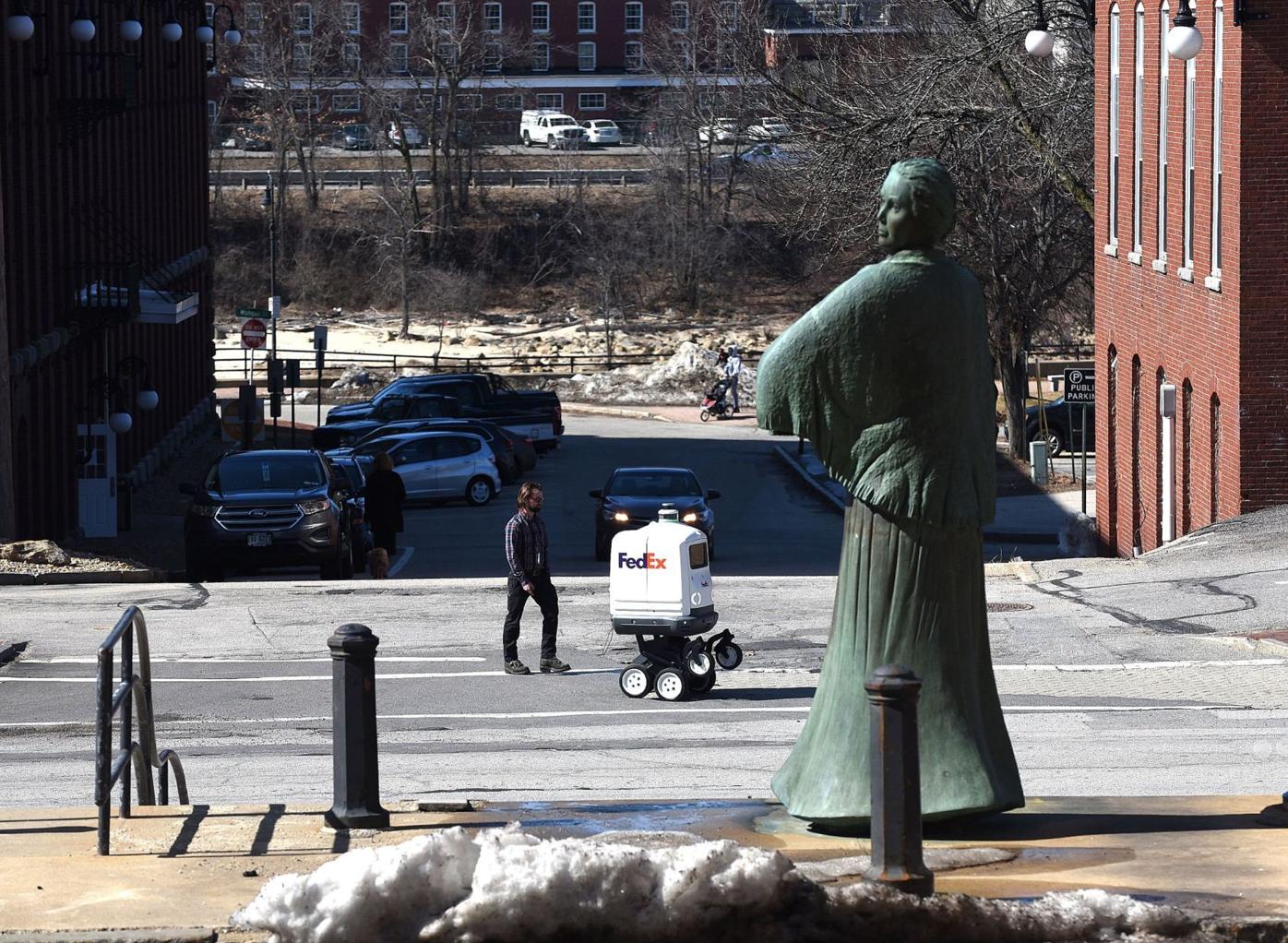 A FedEx robot and its handler walk down Commercial Street past the Millie the Mill Girl statue last Wednesday. 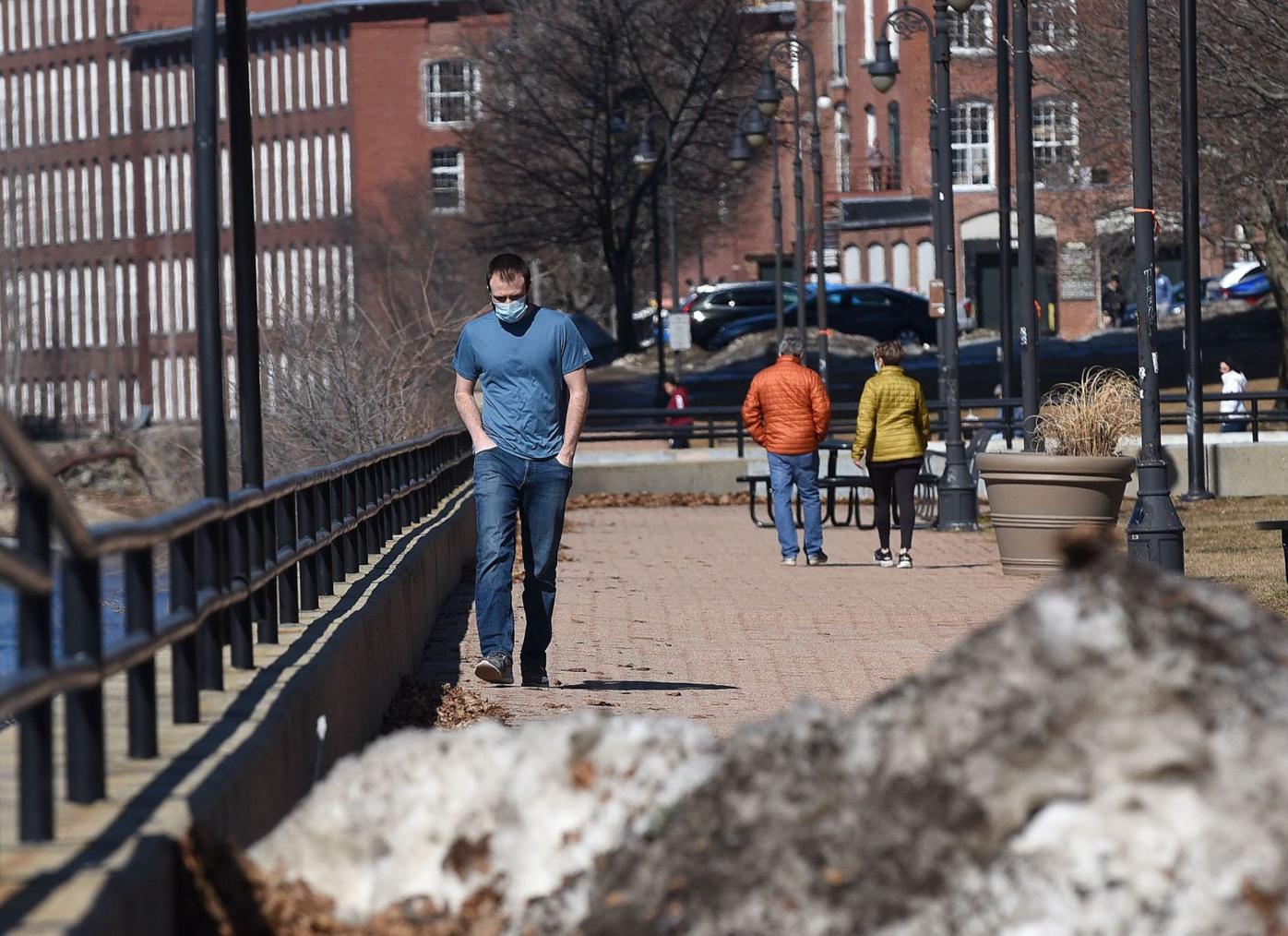 A small number of people walk through Arms Park in Manchester’s Millyard during lunchtime last Wednesday. 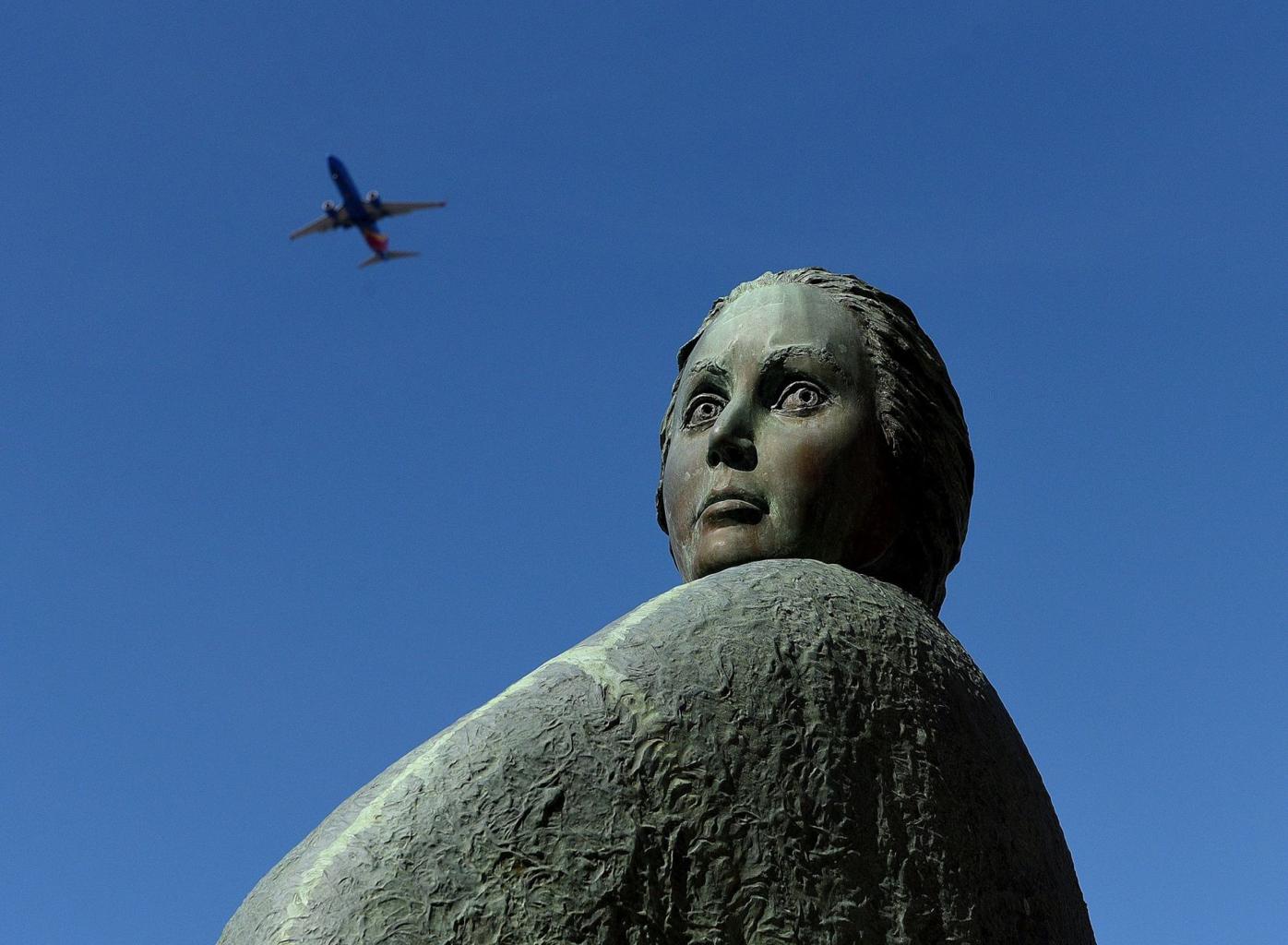 The Millie the Mill Girl statue in Manchester’s Millyard keeps an eye on things as a plane passes overhead during Wednesday’s warm snap in Manchester. 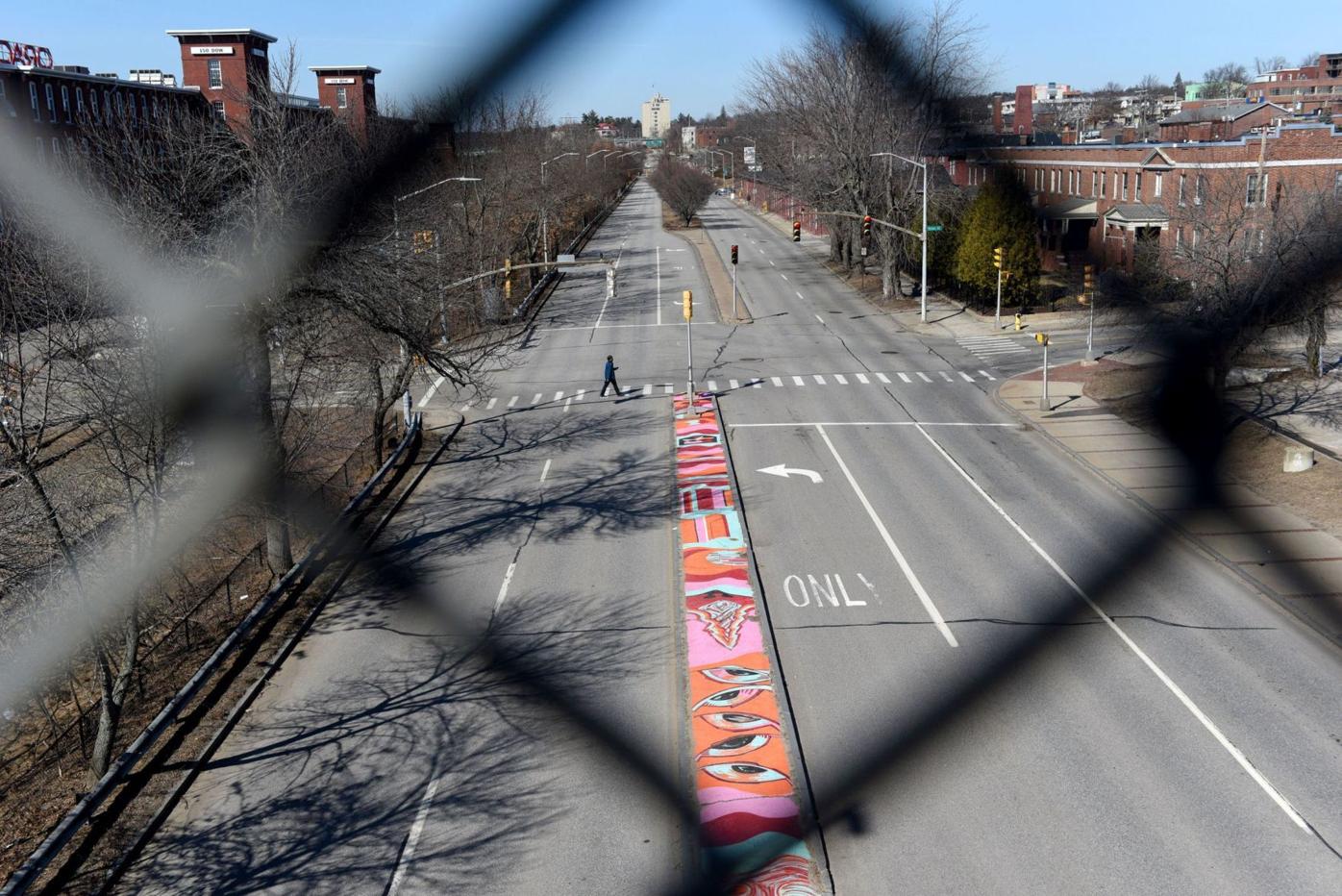 A lone pedestrian crosses a quiet Canal Street in Manchester’s Millyard on March 10, 2021. 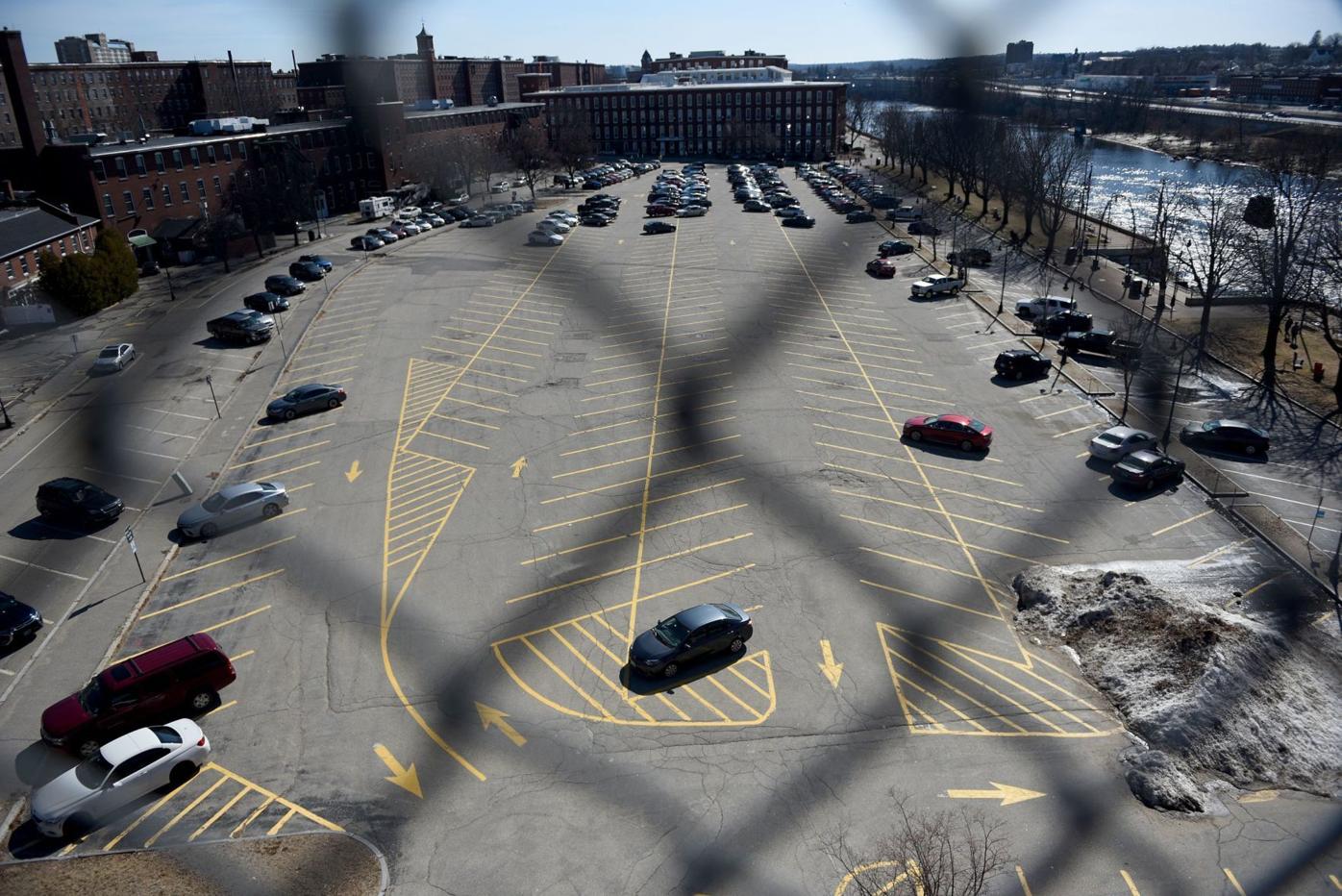 A year after the pandemic hit, the Arms Park parking lot in Manchester’s Millyard is only at about 25% capacity. DAVID LANE/UNION LEADER

A FedEx robot and its handler walk down Commercial Street past the Millie the Mill Girl statue last Wednesday.

A small number of people walk through Arms Park in Manchester’s Millyard during lunchtime last Wednesday.

The Millie the Mill Girl statue in Manchester’s Millyard keeps an eye on things as a plane passes overhead during Wednesday’s warm snap in Manchester.

A lone pedestrian crosses a quiet Canal Street in Manchester’s Millyard on March 10, 2021.

A year after the pandemic hit, the Arms Park parking lot in Manchester’s Millyard is only at about 25% capacity. DAVID LANE/UNION LEADER

A YEAR AGO, it was hard to find parking in Manchester’s Millyard. Rarer than hens’ teeth, said John Clayton, executive director of the Manchester Historic Association.

“You could fire cannons off in the Arms Park parking lot, and no one would notice,” he said.

A stroll across the Notre Dame Bridge offers an overhead view of the Arms Park lot. Since the start of the COVID-19 pandemic, it’s often more than three-quarters empty.

Only a few employees trickled out of nearby mill buildings on a warm day last week. That’s what the lunchtime rush looks like these days.

The Millyard has become known as a bustling economic center in the Queen City with companies like DEKA Research and Development Corp., Geneia and PillPack. Apartments and colleges also occupy the 19th-century buildings. Gyms, restaurants and salons support the ecosystem.

Thousands of employees are now working from home, making the atmosphere seem bleak compared with a year ago, but many are optimistic about it bouncing back. Manchester is resilient, Clayton said. After all, look at how far the Millyard has come since 1936, when the textile industry collapsed.

“I think like 1936 this is going to be another demonstration of Manchester’s ability to take a punch and get back up from the mat and get back into the fray,” he said.

On a recent afternoon, John MacKay took a break from his remote work with Fidelity Investments and sat on the steps near the Mill Girl statue at Commercial and Stark streets. He lives in the Lofts at Mill No. 1, a converted mill with 110 units.

He moved into the apartment about seven years ago to be walking distance from restaurants and bars where he could meet up with people.

“I think people are just dying to get out and be on more of a regular routine,” he said. “I think it will come back quite a bit with the combination of the warmer weather and the vaccine. People will feel more comfortable.”

As MacKay sat on the steps, several FedEx delivery bots built by DEKA were being tested as employees walked behind them. Maybe a sight that will become more common as online shopping continues to grow?

Room at the inn

The 126-room Tru by Hilton hotel opened in December across Arms Park.

The bookings are trending up, but the hotel is lucky to have 20% occupancy during the week. The weekends are typically around 60% filled. The Common Man Roadside leased space on the ground level on the building.

He hopes for a “flood of vaccinated Bostonians and New Yorkers” to come this summer and for leaf peeping in the fall. Business travel is also key to the hotel’s long-term success.

Even before the pandemic, brokers with Colliers International have looked to fill the nearly 100,000-square-foot space left vacant by Oracle + Dyn at 150 Dow St. The company once had more than 400 workers in the Millyard.

The space will likely be subdivided, said Robert Rohrer Jr., a managing director in New Hampshire for Colliers.

Experts say it’s too soon to say how the office market might shake out, but Rohrer thinks the Millyard will remain attractive for businesses looking for satellite locations or to relocate to New Hampshire altogether. Some “significant users” are inquiring about multiple spaces the company has listed.

“We are seeing a lot of activity,” he said. “I’d say it’s surprisingly active given what you hear on the news that people aren’t looking for office space.”

In July, AutoDesk renewed its lease at 100 Commercial St. in the Manchester Millyard, where it occupies 29,376 square feet, according to Colliers.

Nearly every day, employees at Geneia, a health care analytics company, ask president and CEO Heather Lavoie when they can return to the office.

“I continue to say, hopefully soon,” Lavoie wrote in an email to the Union Leader.

Right now, only one person works onsite out of nearly 50 before the office closed on March 13, 2020. The company will consider guidance from the Centers for Disease Control and Prevention, vaccine rates and other factors will be taken into consideration as part of its reopening.

The company has always allowed remote work opportunities, but the Millyard has been “a successful draw for employee recruitment” across New England and the country, Lavoie said.

“Our team loves the Millyard, from the aesthetics and the technology ecosystem to the proximity to restaurants, walking and running paths, the airport, the highway and cultural venues,” she wrote.

With commercial vacancies at the Jefferson Mill, Brady Sullivan Properties plans to convert more of the building into 61 loft-style apartments. Last year, the company opened 35 units in the building.

“That was a smashing success,” Brian Pratt, a consultant with Fuss & O’Neill, told the planning board last week.

The mixed-use helps alternate when parking spaces are being used.

For years, projects have been talked about to improve the areas along the Merrimack River.

Right now, efforts are underway to renovate the Mill Girl stairs to improve accessibility and beautify the area though hardscaping, landscaping and improved lighting.

“It is a real gathering place for people here,” Clayton said. “It is one of the real important gateways to the Millyard.”

The city’s draft master plan calls for some potentially drastic changes, including filling in the Arms Park parking lot and replacing it with a park.

“This unique amenity is not utilized as much as it could be because of the rather unpleasant environment created by the large adjacent parking lot,” the report reads.

The report suggests amphitheaters, fountains and other features to make it an appealing place for people to gather.

Flotz said he advocated for more than 20 years for better public space at Arms Park. He thinks the city has missed out on opportunities to better showcase the Merrimack River.

He said many parks in larger cities like Chicago have parking garages constructed under them. Maybe the same can be done in Manchester, he said.

Some parking was alleviated at the southern end of the Millyard when Lansing Melbourne Group opened a 1,700-space parking garage in 2019, which is managed by Southern New Hampshire University. The company has invested $80 million in the Millyard the past two years, Flotz said.

Nearly 2,000 SNHU employees worked out of the Langar Place Mill before the pandemic. All are working remotely at least until June 30, according to Lauren Keane, associate vice president of communications.

“The COVID-19 pandemic has certainly changed the way we, like many employers, think about physical spaces and remote work,” she wrote in an email. “We imagine there will be more flexible work options and adjusted workspaces in the Millyard, but we do not envision a reduced footprint at this time.”

Given the pandemic, empty parking spaces should not be used to gauge the success of the Millyard, Flotz said.

“I don’t think that has anything to do with demand. I think that is all pandemic-driven and not the occupancy of the buildings,” he said. “Everybody is staying home.”

“My hope is that one day we’ll get back to that vital point where parking is a problem,” Clayton said.

Waiting for a comeback

Bayona Cafe at the Jefferson Mill hasn’t operated since the start of the pandemic. The business relied on customers from nearby businesses, including Eversource. The energy company has 75% to 80% of its 280 employees working from home, according to a spokesman.

The cafe space is now being shared with another business, Ray Street Pizza. Keri Laman, owner of Tidewater Catering and three cafes in and around the Millyard, said both businesses could operate in the space if Bayona were to reopen.

“It is literally like tick tock, tick tock waiting for companies to decide to come back to work in the area,” she said. The lofts likely won’t bring the same amount of foot traffic.

Waterworks Cafe, also owned by Laman, inside the Waumbec Mill at 250 Commercial St. is doing well with its new online ordering system and an inhouse delivery service. The cafe space for the past four weekends has been “slammed,” she said.

“I think the comeback to work economy is going to be a lot more exciting and more vibrant than people realize. Certainly downtown and Millyard needs it,” she said.

A year ago, Chris Sununu was standing outside the Market Basket store in Epping at 5:45 a.m. consoling anxious seniors who snaked in a long li…