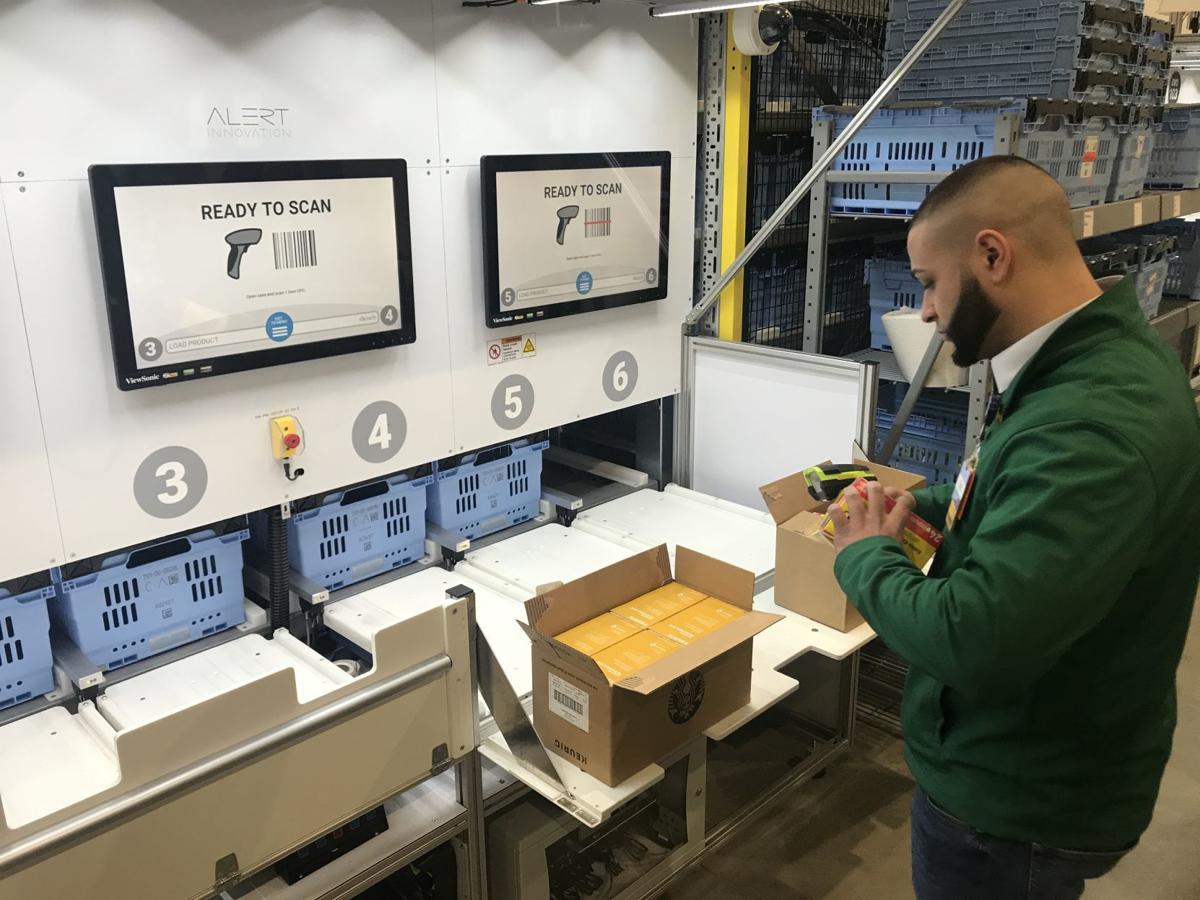 Walmart co-manager Gage Anderson demonstrates how employees load items into the Alphabot storage and retrieval system, by scanning them in, and manually inputting the expiration dates. 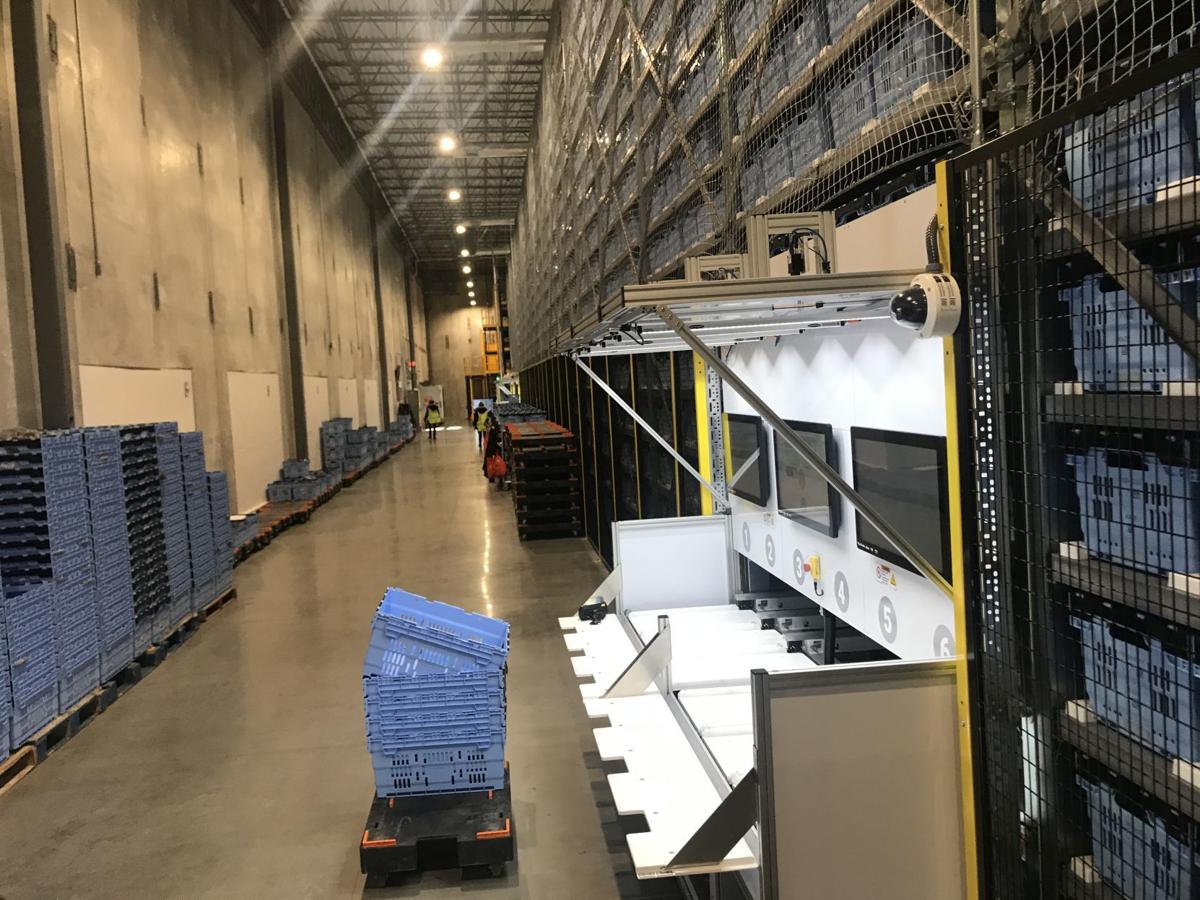 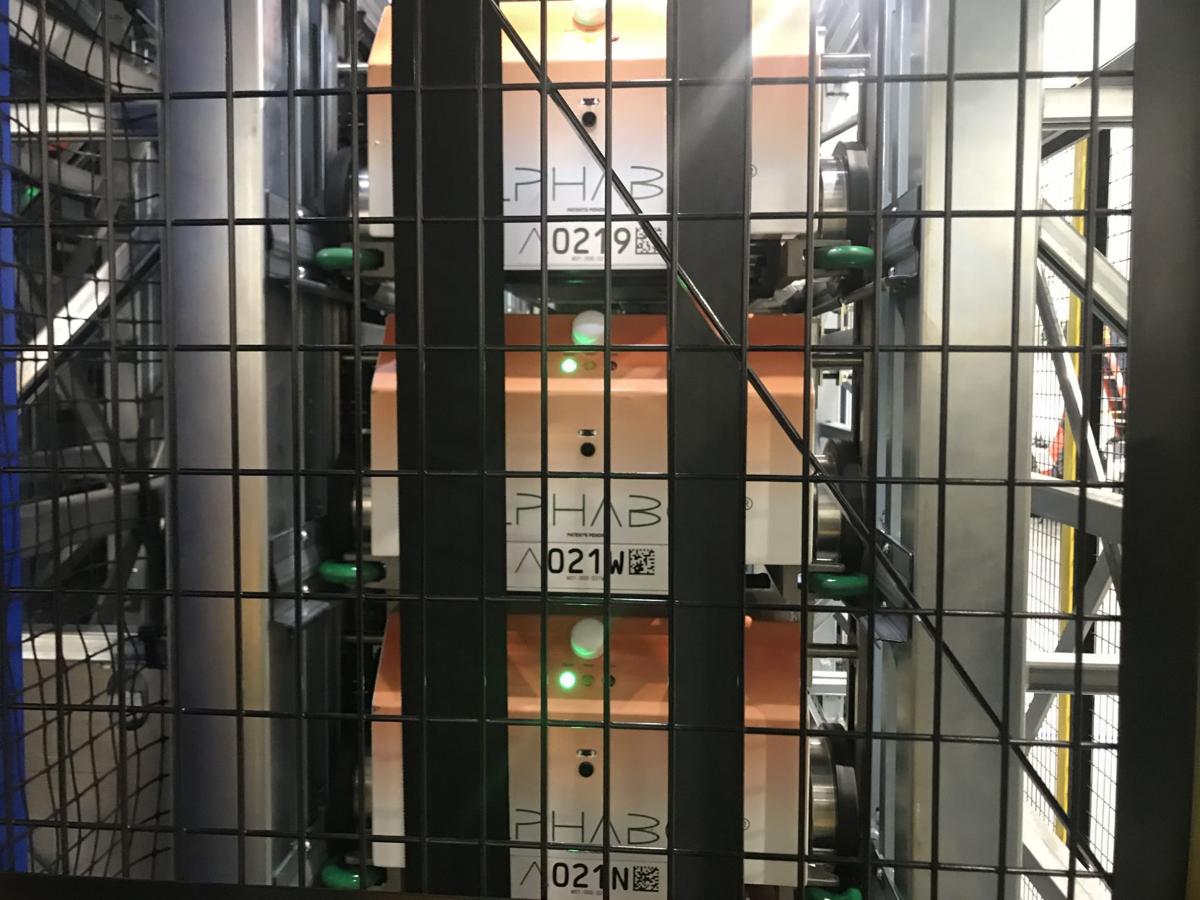 Alphabot’s inventor John Lert claims the machine is the only robot of its kind that can move vertically and horizontally on its own.

SALEM — Walmart has turned to robots to speed up its online orders, beginning with the Granite State.

A pilot program to store and automatically retrieve small items using the robotic system is now operating in the Salem Walmart Supercenter on North Broadway. Walmart says it plans to expand the Salem system and start building similar systems in California and Oklahoma.

Starting last spring, about 30 box-shaped robots began wheeling through an 8,000-square-foot three-dimensional grid, moving blue plastic totes around, retrieving items and delivering them at various stations for employees to collect.

The Alphabot was developed by Alert Innovation in North Billerica, Mass. So far, the company is working exclusively with Walmart to develop the system, which was first announced in August 2018.

ALERT founder and Alphabot co-inventor John Lert said the robot is the only one of its kind that can move vertically and horizontally by use of its own built-in motors and wheels. Other competitive systems, Lert said, require outside infrastructure like lifts and conveyor belts to help shuttle the robots around.

“I’ve been working on this for 20 years,” Lert said last week during a demonstration.

He also said he thinks this is the first system of its kind that operates within three temperature zones, with sections of the grid partitioned for cold storage. Instead of using batteries, the robots stay powered through self-charging supercapacitors that recharge with every vertical trip.

Presently, the system is housed within a 20,000-square-foot building and carries about 4,500 stock-keeping units (SKUs), which means it is at about 20 percent of its potential capacity. There are about 16,000 totes in the grid, some containing stock, others holding orders and others still with empty bags.

At full capacity, Lert estimates they would need to have up to 80 to 100 robots operating at a time, and the system would be able to store up to about 20,000 SKUs. Right now, they’re still in the testing phases and ramping up that capacity gradually.

It’s not expected to fully replace the online order system, especially since individual robots have a maximum weight limit of about 50 pounds, and are each about two 2½-half feet long. But it promises to make the system more efficient, and keep the self-service model viable in the long run, Lert said.

Moving forward, Walmart spokesman Ragan Dickens said it plans to incorporate this system at stores in Burbank, Calif., and Mustang, Okla. He said the goal is to start construction in the next fiscal year.

Dickens would not say how much the company is investing to build the system in Salem or elsewhere.

Meanwhile, in Salem, Walmart will be looking at the possibility of expanding the existing system to serve other Walmart stores in the area.

“I think there will be potential to serve additional stores,” Dickens said.

But he said they’re still learning how the system will work.

Another change being considered for down the road is the delivery process. Right now, employees retrieve the orders in the attached building and bring them into the retail area for customer pickup. Eventually, Walmart project leader Brian Roth said they may develop an automated system that conveys the orders straight into the store and directly to customers.