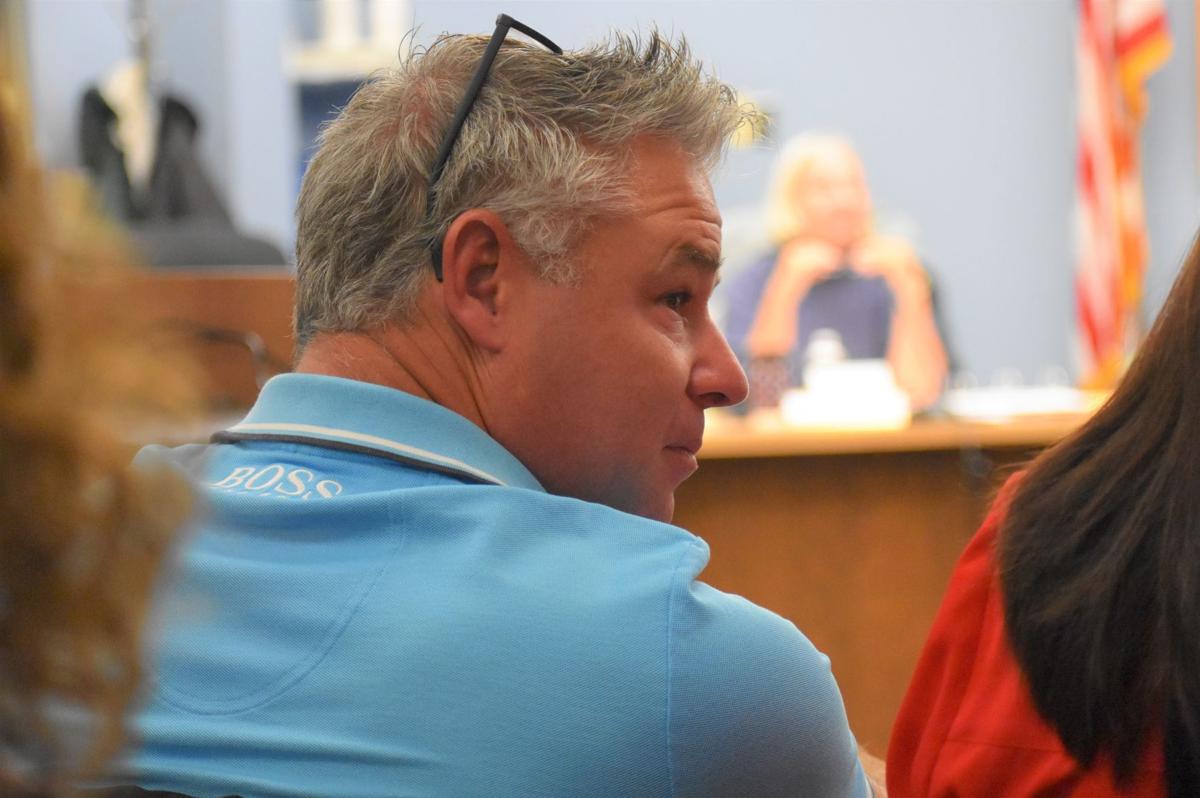 Jamison Merriam turns to speak with his attorney William Woodbury during a Monday night meeting of the Laconia Zoning Board of Adjustment. Merriam co-owns and operates the floating restaurant and nightspot The Dive that is docked at the Winnipesaukee Pier. 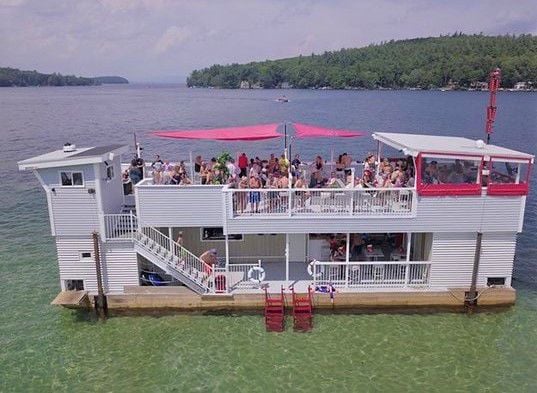 The Dive, a barge-mounted floating restaurant and nightspot that heads to sandbars on Lake Winnipesaukee during the day and docks at the Winnipesaukee Pier in Weirs Beach at night, is appealing a land-use action by the city of Laconia. 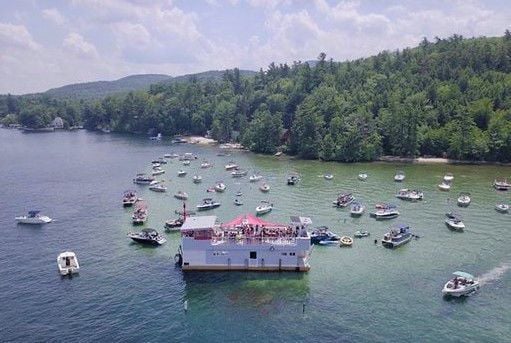 The Dive is a floating, two-story restaurant in Laconia that docks at Weirs Beach and travels to several sandbars on the Big Lake where boaters congregate, drop anchor and swim.

LACONIA — Locked in a zoning dispute, an owner of The Dive floating restaurant and bar said Tuesday he is also fighting to keep his lease at the Winnipesaukee Weirs Pier.

Monday night, a capacity crowd filled council chambers at City Hall to attend the Zoning Board of Adjustment meeting scheduled to hear The Dive’s appeal of Code Enforcement Officer Dean Trefethen’s decision that site plan approval was needed for the establishment to continue to dock at the pier.

Trefethen has said The Dive is using 263 Lakeside Ave. the use of the pier was expanded by more than 500 square feet without the needed site plan review from the planning board.

Attorney William Woodbury of Laconia, who represents Jamison Merriam and Elizabeth Sullivan, owners and operators of the floating nightspot, has said Trefethen’s decision was in error. But on Monday night he agreed with the attorney representing Trefethen to table the appeal until the ZBA’s next meeting on Nov. 18.

Attorney Steven Whitley of Mitchell Municipal Group of Laconia, who represents Trefethen, told the ZBA in a letter dated Oct. 21 that the code enforcement officer’s administrative decision does not involve the “construction, interpretation, or application,” of the zoning ordinance, and so the board does not have jurisdiction to hear the appeal.

The appropriate forum, according to Whitley, is Belknap County Superior Court.

Merriam said Tuesday he is grateful for the support his business has received, especially from those willing to write letters to the city on behalf of The Dive.

“This year was just stellar. Our social media has really taken off. We’ve had offers to go all over the lake,” he said.

Merriam discounts a letter in the ZBA file indicating that the business had lost its lease for dock space, saying it doesn’t tell the full story.

Attorney Thomas Walker of Walker & Varney PC of Wolfeboro, in a letter dated Sept. 24, wrote: “In the past several weeks a host of troubling events have occurred such that my client will not be renewing The Dive, LLC’s seasonal lease when it expires on October 31, 2019.”

According to Merriam, he has a two-year seasonal lease with East Coast Flightcraft, which owns the pier. Merriam said East Coast Flightcraft officials told him they have plans to apply for the needed approvals to extend their docks, and feel the dispute involving The Dive could negatively affect the permitting process and asked him to leave amicably.

But Merriam says he will fight to keep his lease.

Property owners on Simpson Avenue in Weirs Beach have submitted letters to the ZBA complaining about noise, and arguing that The Dive blocks their view of the lake and makes navigation in the area difficult. They also assert that the barge’s motors move sand on the lake bottom and that the contents of mop buckets used to clean the decks get dumped overboard.

The two-story restaurant is built atop a barge, and is 62 feet long and 22 feet wide. It is equipped with restrooms, a kitchen and an upper-deck lounge offering a panoramic view of the lake. During the summer season, The Dive motors to different sandbars on the lake where boaters congregate and drop anchor; at night it returns to the dock.

Barbara Rillahan whose family has lived on Simpson Avenue for 50 years, claims The Dive never left the pier during May or June, maintaining it was operated as a bar and restaurant attached to the end of Weirs Pier.

“This is just like parking a large two-story Winnebago with loud party people and loud music at the circle of a cul-de-sac close to homes,” she wrote.

Merriam said The Weirs is a commercial resort zone geared to entertainment. He asserts that the nearby Tower Hill Tavern with its higher elevation, “produces more noise than my Jimmy Buffett.”

The owners of a floating restaurant named “The Dive” are appealing the city planning department’s decision that a site plan amendment is needed for the business to continue its operation adjacent to the Winnipesaukee Pier.

Auto review: For 2020, the Hyundai Sonata regains more than just its design mojo

It’s remarkable how often the automotive industry forgets one essential truth in car design, best expressed by the late industrial designer Raymond Loewy: “Between two products equal in price, function and quality, the one with the most attractive exterior will win.”

Auto mechanics must provide their own tools

I’m just starting out in the auto repair business and working for a dealership.

NEW YORK — Global equity markets slumped on Friday as the fast-spreading coronavirus drove investors into safe havens, with gold hitting a fresh seven-year high and the yield on the 30-year U.S. Treasury bond sliding to an all-time low.

T-Mobile US and Sprint agreed to new terms for their pending merger that take account of the deterioration in Sprint shares since the transaction was first agreed upon, putting the industry-altering deal a step closer to completing.