LACONIA — A main traffic route in the Lakes Region will be closed for up to 30 days next spring, requiring motorists to go 18 miles and more than 30 minutes out of their way, according to the state Department of Transportation.

The state is replacing the Route 3 bridge over the railroad tracks on the Weirs Beach side of the Weirs Channel.

The construction window for the $1.8 million project is March 15-May 15, according to DOT Bridge Design Administrator Robert Landry. Also affected will be Route 3 in the Weirs section of Laconia.

At a recent council meeting, City Manager Scott Myers stressed that the work was a state project. The city was besieged with complaints last spring about detours and business impacts from utility and road reconstruction projects undertaken throughout Laconia after years of deferred maintenance.

Under the terms of the contract, a section of Route 3 between Lakeside Avenue and Channel Lane can be closed for 30 consecutive days within the 62-day construction window, with the start dependent on weather, Landry said.

To reduce the length of the road closure, the contract includes a $10,000 per day incentive-disincentive clause, Landry said. Every day ahead of schedule will net the general contractor, Evroks Corporation of Northfield, $10,000 each. For each day over, the company will lose the same amount. 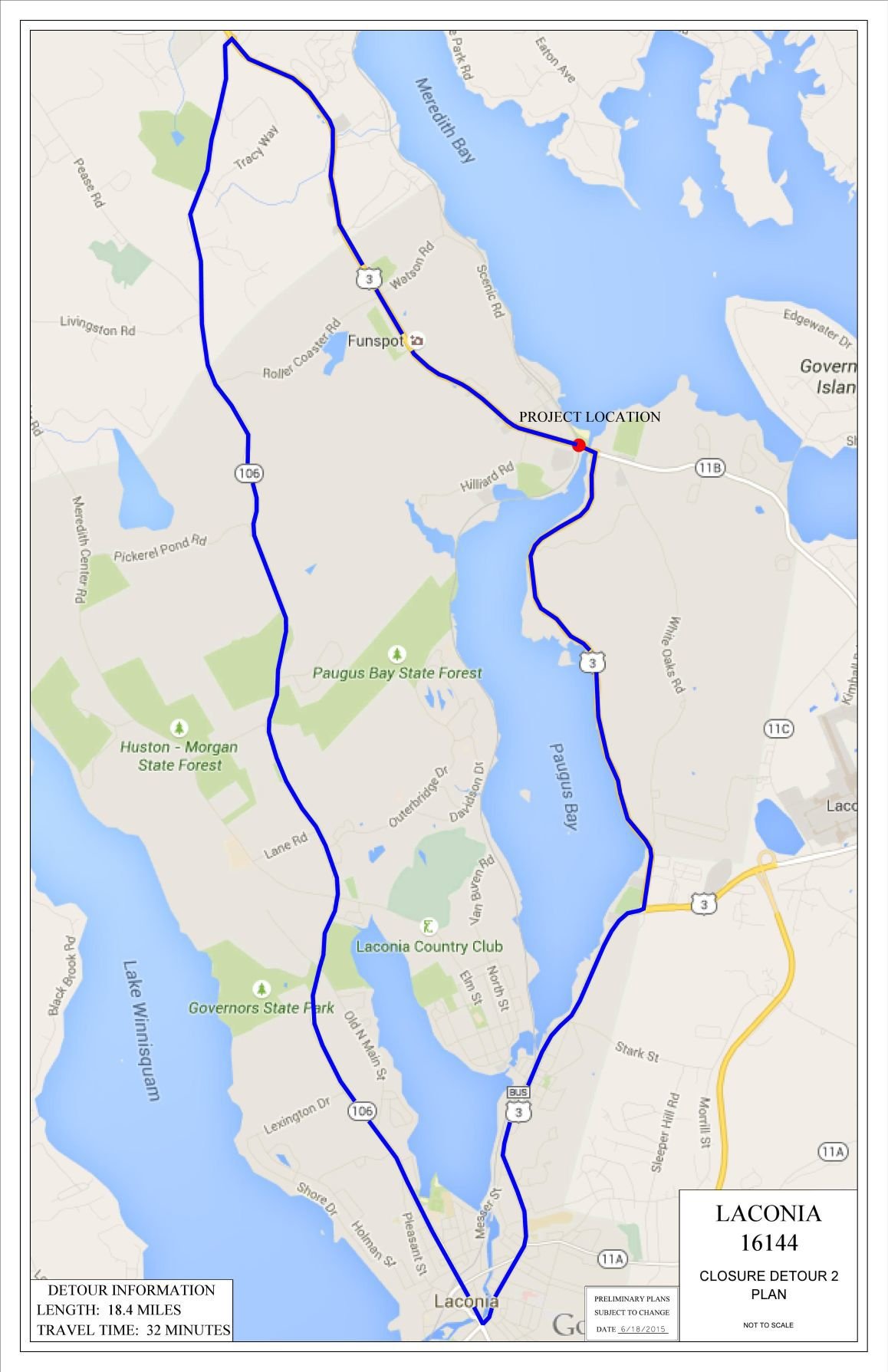 The work will involve replacing everything above the cut granite block abutments and the concrete cap, including a new bridge and bridge approach rails. Railroad tracks beneath the bridge carry tourist trains along the shoreline of Paugus Bay.

A combination of road salt, increased vehicle weight and exhaust from coal-fired trains has caused areas of the underside of the deck to crumble, exposing steel reinforcing bar.

Former Belknap County Commissioner Mark Thurston, whose business, Thurston’s Marina, abuts the railroad bridge, said someone who lives on Tower Hill and wants to go to the Weirs Post office across the channel linking Paugus Bay with Lake Winnipesaukee will have to travel 36 miles round trip.

Construction will begin once snowmobiles no longer are allowed to access the tracks and is to be completed by May 15, when the trains begin running. Closing the bridge to vehicle traffic is expected to help the project finish sooner.

LACONIA -- A crash on Route 3 seriously damaged three cars after a driver fell asleep at the wheel.

No one wants to buy Mexico's presidential plane. So how about a raffle?

MEXICO CITY — For a president with a “man of the people” image, it seemed a great idea.