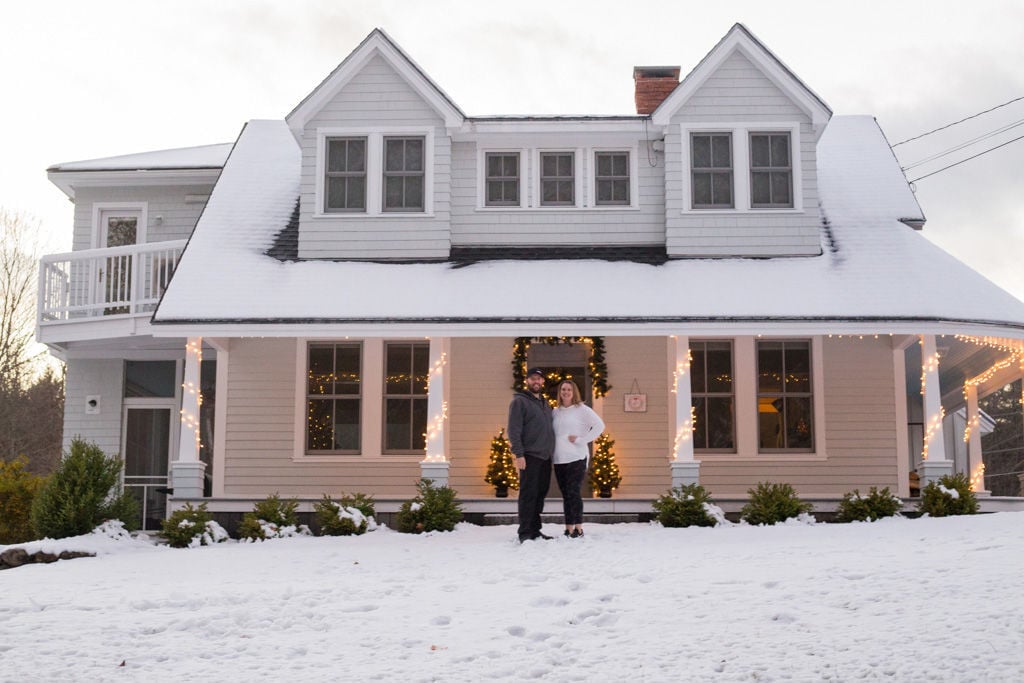 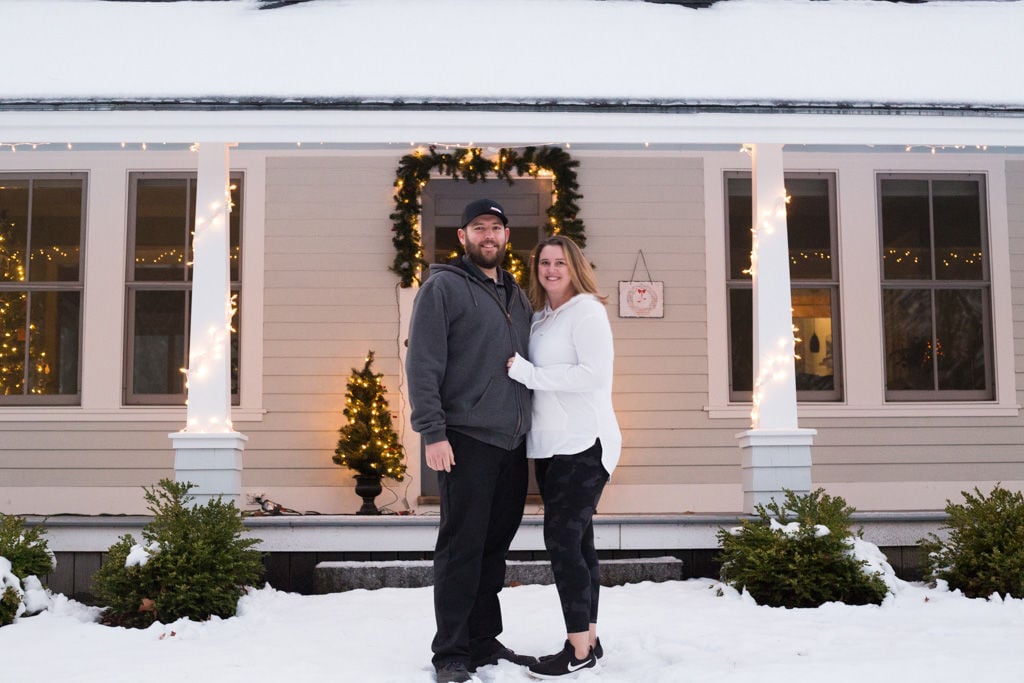 The Hardwicks moved from Wilton to Amherst in September, living for a month between homes with their two kids, two dogs and a cat in a borrowed camper parked in a relative’s driveway in Nashua.

“We loved seeing our family every single day,” said Kristen Hardwick, who co-owns the Coworking House in Milford. “The worst part was probably trying to manage two dogs in a camper.”

Despite fears of a slowdown, purchases of New Hampshire homes and condos are up by $1 billion since March compared with the same period a year ago, according to a Sunday News analysis.

“People can work virtually anywhere and a nice single-family house is ideal,” said Rice, chief statistician for the Seacoast Board of Realtors, which represents 13 cities and towns including Portsmouth and oceanfront communities.

“Considering we had such pathetic numbers in April and May, to actually be ahead of last year is mind-blowing,” Powers said.

The additional $1 billion spent on condo and single-family home purchases between April and November represented an almost 18% increase from the previous year, according to calculations using data from the New Hampshire Association of Realtors.

That’s enough to buy every resident of Derry and Goffstown a 2020 Toyota Corolla at list price.

“When the pandemic rolled across the landscape, we in the real estate business really expected everything to grind to a halt,” said Bedford Realtor Greg Powers.

Several things helped fuel interest in buying and a rise in prices.

Interest rates remained near record lows, and some would-be sellers didn’t put their homes on the market because of COVID-19 fears, which widened the imbalance of supply and demand. A spike in unemployment of 17.1% in April disproportionately affected some industries — but not most home buyers, Powers said.

“The people who were going to buy a house remained relatively unscathed and kept shopping for houses, so there was no real decrease in demand despite the dire economic news,” he said.

“I also think that people living in apartments became more determined to buy a home to get out of the communal living situations they were in,” Powers said. “And, if I may play amateur psychologist for a moment, in the face of a medical threat, their nesting instincts kicked in and their desire to own instead of rent became overwhelming.”

Affording a home is becoming a bigger issue.

About 85% of renters in New Hampshire didn’t make enough money in 2019 to afford the state’s record median price of $351,000 for single-family homes in November, according to the New Hampshire Housing Finance Authority, which offers programs for first-time home buyers.

A house at that price point would require $95,000 in yearly income to cover the mortgage payments, estimated taxes and insurance.

“Housing continues to increase in cost, and the challenge to availability makes it really difficult to recruit and retain workers,” said Dean Christon, the housing finance authority’s executive director and CEO.

This real estate boom is different from the one that preceded the Great Recession.

“During the year, a lot of people compared the frenzied market to the bubble of 2003-2007, but the two markets are really quite different,” said Powers, a Realtor with Keller Williams Metropolitan Realty.

“That earlier period was fueled by very lax lending requirements that led to a lot of speculation, which in turn led to a run-up in prices that were unsupported by market fundamentals,” Powers said. “The current rise in prices is more a function of the basic supply-and-demand equation.”

The Hardwick family learned the economics of supply and demand.

They also were outbid on three homes they liked.

“You’d go look at the house and by the time you left your showing, there’d be three more offers,” Kristin Hardwick said by phone last week. “There was so much competition, and people were offering so much above asking.”

They found a three-bedroom Cape in Amherst for sale through a friend of a friend and made an offer before it hit the market. They settled on $430,000 and closed Sept. 28.

“It totally would have sold for more. There would have been a bidding war, and I don’t think we would have won,” Hardwick said.

“Word of mouth is the only way,” she said. “I know so many people buying houses by word of mouth now.”

So why move in a pandemic?

“Because when you’re stuck in the house, you see all the things you don’t like,” Hardwick said. “We had plans to move in 2020 anyway. Then the pandemic happened. It gave me a lot of time to do projects and get the house on the market.”

The power of cash

Realtor Adam Dow said large numbers of out-of-staters armed with cash from previous home sales have elbowed out other bidders.

“Right now, there is a surge of people purchasing properties, but multiple offers are won by people putting in all cash now or significant cash now,” said Dow, CEO of the Dow Realty Group at Keller Williams Realty, whose listings include the Lakes Region, Seacoast and the mountains.

“I think there’s people in the city that might not have been able to move as fast up here that still want to be up here, for a vacation house” or living around fewer people, he said.

Dow ties at least 50% of his company’s increased sales to the pandemic.

Some people bought vacation homes here after being unable to travel to parts of the world where visitors were banned or limited because of the pandemic.

“I do think there are people that this was a wakeup call as to how fragile maybe our travel system is and currently COVID, that has changed their outlook on a lot of things,” Dow said. “Having a secure base of operations and liking where you live is, I don’t think, something that will go away quickly.”

Last March, the Manchester-Nashua area was rated the third “hottest” real estate market among 300 metro areas, according to Realtor.com. This summer, Hudson’s was among the nation’s top 10 “hottest zip codes” for housing. Both ratings were based on the speed of sales and the higher average number of views for listings.

A lack of new construction and a migration of people into the state exacerbates the imbalance between the supply of available housing and the increasing demand.

Between 2015 and 2019, an average of 8,300 more people a year moved into New Hampshire than left the state, compared to 100 more a year during the Great Recession, according to Ken Johnson, senior demographer at the Carsey School of Public Policy at the University of New Hampshire.

The age group showing the largest increase during that time was 18- to 29-year-olds. The net gain among that group was 3,800 a year, compared to no gains earlier in the decade.

Christon expects the Legislature in 2021 to take up several proposed measures to encourage home construction. They include requiring communities to publish fee schedules and maintain them throughout the process, offering more technical training to local planning boards and setting limits on how long local boards may take to consider housing projects.

“We have to recognize we’re not building enough housing to meet the demands of a strong economy,” Christon said.