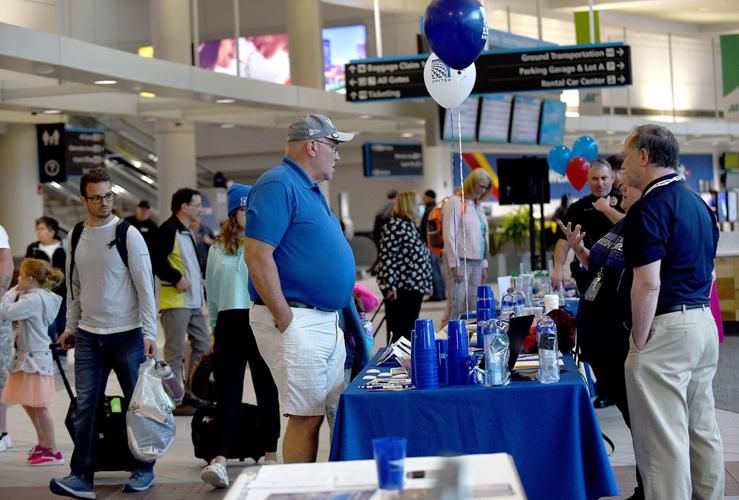 Glenn Matthews speaks with airport staff at a job fair at the baggage claim at Manchester-Boston Regional Airport in Manchester on May 3. 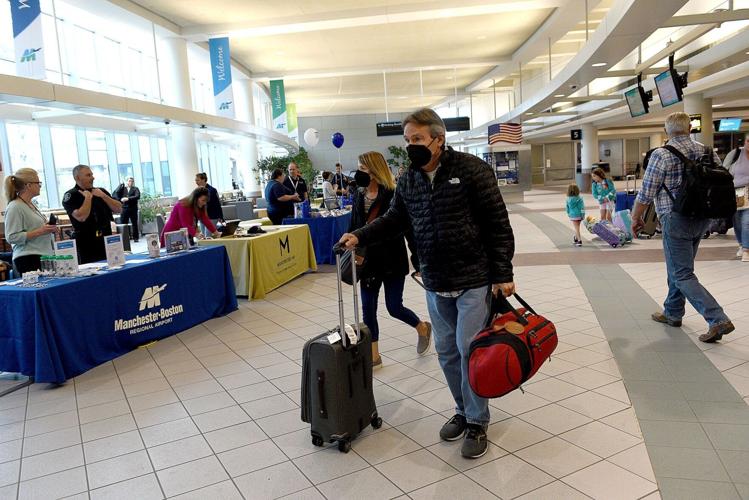 Travelers walk past a job fair in progress near the baggage claim area at Manchester-Boston Regional Airport in Manchester this month.

Glenn Matthews speaks with airport staff at a job fair at the baggage claim at Manchester-Boston Regional Airport in Manchester on May 3.

Travelers walk past a job fair in progress near the baggage claim area at Manchester-Boston Regional Airport in Manchester this month.

Already open fewer hours due to staffing woes, Throwback Brewery in North Hampton sometimes needs to take tables out of service to make sure it has enough employees to tend to customers.

“I have not seen a market like this in finding workers or not finding candidates since we opened” 11 years ago, co-founder Nicole Carrier said during a sparsely attended job fair in Portsmouth last week.

She would like to hire six more people, including cooks.

“We have a dishwasher training to be a line cook,” Carrier said. “We would love to do more of that.”

She is looking for “people who are Swiss Army knives, who can do all kinds of things.”

More employers these days are training current workers to be able to fill in other roles or hiring applicants who seem able to handle multiple roles, according to interviews with employers at four recent job fairs.

While waiting for job candidates to stop at a job fair next to the baggage claim area at Manchester-Boston Regional Airport, Donna Nixon shared that Wiggins Airways trains some office staff to take on other employees’ duties as needed.

“We do a lot of cross-training,” said Nixon, president of Wiggins Airways.

But “we can’t cross-train pilots and mechanics,” Nixon said, though she wishes she could.

A day later, Debbie Reed occupied the front lines in her hunt for workers.

The president of Bill Dube Ford Toyota was helping staff with a virtual job fair live from her office in Dover.

“The other day, I started shredding” paperwork typically done by another worker, Reed said during a video interview.

“Everybody around here, their departments are short-staffed,” she said in a follow-up interview.

Reed said the dealership is trying to do a lot of cross-training, including showing employees how to enter the arrival of new vehicles into the dealership’s computer system.

Workers are “pretty receptive to it,” Reed said. “It keeps them busy.

“We scan all the documents internally. Maybe we’ll have to outsource that,” Reed said.

Training workers for multiple jobs is smart, according to Barry Roy, regional president at Robert Half, a staffing agency with three New Hampshire offices.

“People leaving one company leaves that company short-staffed,” Roy said. “People have to be cross-trained.”

With higher salaries, companies “may need to get more out of their existing employees for their business” and its bottom line, Roy said.

But cross-training and requiring people to do more tasks may cause some employees to quit if they “experience burnout,” Roy said.

This summer, New Hampshire should regain the number of jobs lost in the private sector since the pandemic. But the state’s labor force — those working or actively seeking work — remains more than 21,000 below its all-time peak in November 2019, according to Brian Gottlob, director of the state’s Economic and Labor Market Information Bureau.

“The biggest drops in labor force participation have been among older residents and young adults,” Gottlob said by email.

Many older people may have felt financially comfortable retiring with fattened retirement accounts and higher home values until recently.

“With higher inflation and falling asset (financial) values declining, some of those older workers are not as assured about having a comfortable retirement and we are seeing some retirees returning to the labor force,” Gottlob wrote.

Enhanced unemployment checks and multiple stimulus checks in recent years may have made it easier for people in their 20s without a mortgage to step out of the labor force temporarily, Gottlob said.

The shortage of job seekers is good news for people such as college student Tyler Holmes, who attended the Portsmouth job fair at Great Bay Community College.

“It’s great for me personally, because I’m getting a lot of attention,” said Holmes, who lives in Exeter and attends the University of South Carolina.

More than 37,000 online ads for New Hampshire jobs were posted in March and April — about 10,000 more than the same period last year — and there are 81% more openings in 2019 than before the pandemic, according to Emsi Burning Glass and New Hampshire Employment Security.

Many employers are rethinking how to fill openings.

High school students hired for the summer at two Taylor Community retirement communities in the Lakes Region will get trained in multiple jobs, according to Eliot Davis, director of human resources.

“Last year, we hired just groundskeepers,” he said in an interview during a virtual job fair aimed at high school students.

“This year, we want them to learn some housekeeping and maybe some kitchen duties. If we have the need, they may do some one-to-one residential activities,” Davis said.

“If one person is more interested in becoming a plumber or carpenter or maintenance person, we may let them shadow that,” he said. “Our plan is very broad, but we hope to have students get an idea of what they want to do for careers.”

At summer’s end, perhaps a graduating senior may decide to stay and work full-time, Davis said.

The strategy is to get workers in the door and hope they stay longer.

Within the past two years, at least some of The Beach Plum’s four seafood restaurants have trained people to do multiple jobs, such as a line cook, cashier and ice cream scooper.

“That was a good idea,” said Lorraine Petrini, director of marketing.

To show how the job market has changed, The Beach Plum last summer started hiring 16- and 17-year-olds with no experience as line cooks to be trained, she said.

In the past, the restaurant would bring on people with “a good amount of experience,” Petrini said.

At a virtual job fair for banks and credit unions, Katie Blake found at least two job seekers who looked promising. She could hire at least a half-dozen people in New Hampshire, where Ledyard National Bank has offices in Concord and the Upper Valley.

Still, “we’re looking at cross-training across different departments,” said Blake, regional manager for the retail department, who was filling in for a human resources employee on vacation.

Amber Goodwin, branch manager of PeopleReady, a staffing agency, said she knows of a Seacoast lumber company looking for employees who can prepare orders for shipping and also know how to run a forklift.

“There are so many holes” in the workforce of many companies, Goodwin said.

A worldwide shortage of computer chips used in making vehicles has meant a smaller inventory for auto dealerships across the country.

Reed said they are selling “fewer cars but at a higher profit margin to make up for the lower volume,” Reed said.

The dealership has been paying more for workers.

Pay for service technicians who repair vehicles has “gone through the roof,” rising 25% to 30% over two years.

“If you could bring me 20, I’d take all of them” and put them on the payroll, Reed said.

She has had to raise prices to combat wages and other costs.

Where are the workers?

“I think they’re on the couch,” Reed said. “Everywhere you go, you try to go out to dinner, and they don’t have enough help.”