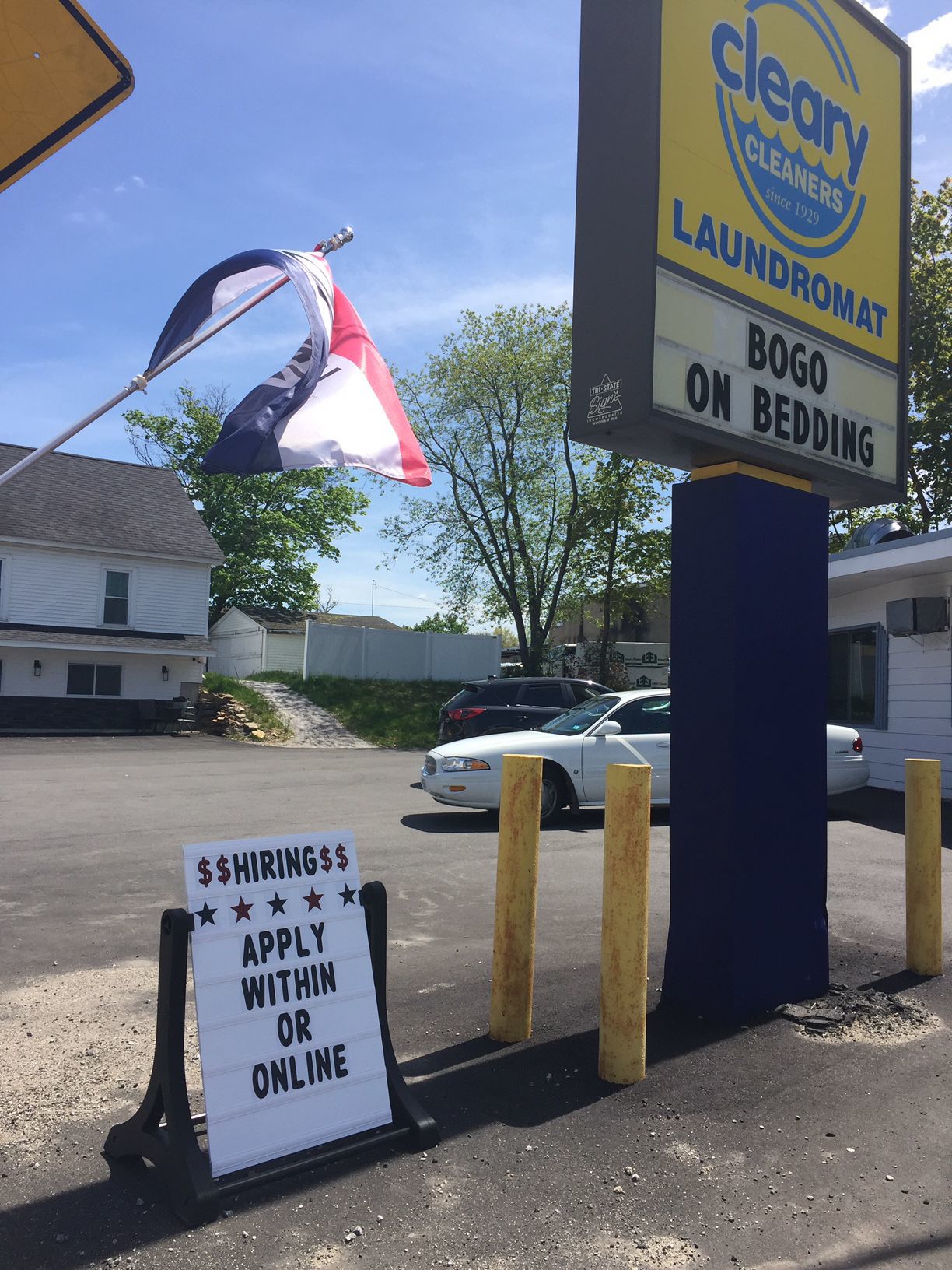 A sign outside Cleary Cleaners on Mast Road in Manchester shows businesses are starting to need more employees.

That produced a record unemployment rate of 17.2% in April — more than double March.

More than 101,000 residents were added to the rolls in April alone after government restrictions to help curb the coronavirus pandemic were enacted in mid-March, forcing businesses to shut or sharply cut back.

“It’s a devastating statement on where the New Hampshire economy is right now,” Laconia economist Russ Thibeault said after the figures were released Tuesday.

The record unemployment rate should peak in April or possibly May before “we’re going to see some improvement over the next several months as parts of the economy open up,” said Thibeault, who in March predicted 15% to 20% unemployment.

Cleary Cleaners, which has 14 locations in New Hampshire, is completing the process of filling five job openings.

“These positions were people who voluntarily due to COVID laid themselves off, for a lack of a better word,” said administration manager Julie Cleary. “Now, we’re picking back up and trying to fill existing positions that we couldn’t get people to come back for.”

Despite record unemployment, she said hiring was “not easy at all.”

In March, Steve Hammes furloughed about half of his 32 workers at One Source Security in Merrimack. “People weren’t letting us in” to install security systems and camera systems, he recalled.

Hammes received a loan from the federal Paycheck Protection Program and was able to recall his entire staff within about three weeks. Only one worker found a job elsewhere in the meantime.

He said he couldn’t have brought back as many people as quickly without the PPP loan, which can be converted into a grant if an employer meets a certain hiring threshold.

“We’re pretty busy as of now,” he said. “By summertime, we’d probably be back to where we were if everything goes well.”

“Although not-seasonally-adjusted labor force statistics typically should not be used for comparison purposes, they present a more accurate measure of New Hampshire’s employment situation in April due to the coronavirus pandemic,” Employment Security said in its monthly news release.

Seasonal adjustment is a statistical technique used to remove the influence of predictable seasonal employment patterns, such as summer hiring.

Workers in the leisure and hospitality sector were hit hardest, with 40,600 fewer people working in that field in April than in March. Of those, 29,100 came from dining and drinking establishments, according to fresh numbers released by Employment Security.

Working in NH not always tax-free

Working across the border can be taxing.

Even before the coronavirus pandemic hit, many workers were looking to get new or improved skills to better their career paths.

Evictions and rents are climbing; COVID-19 protections lifted in NH