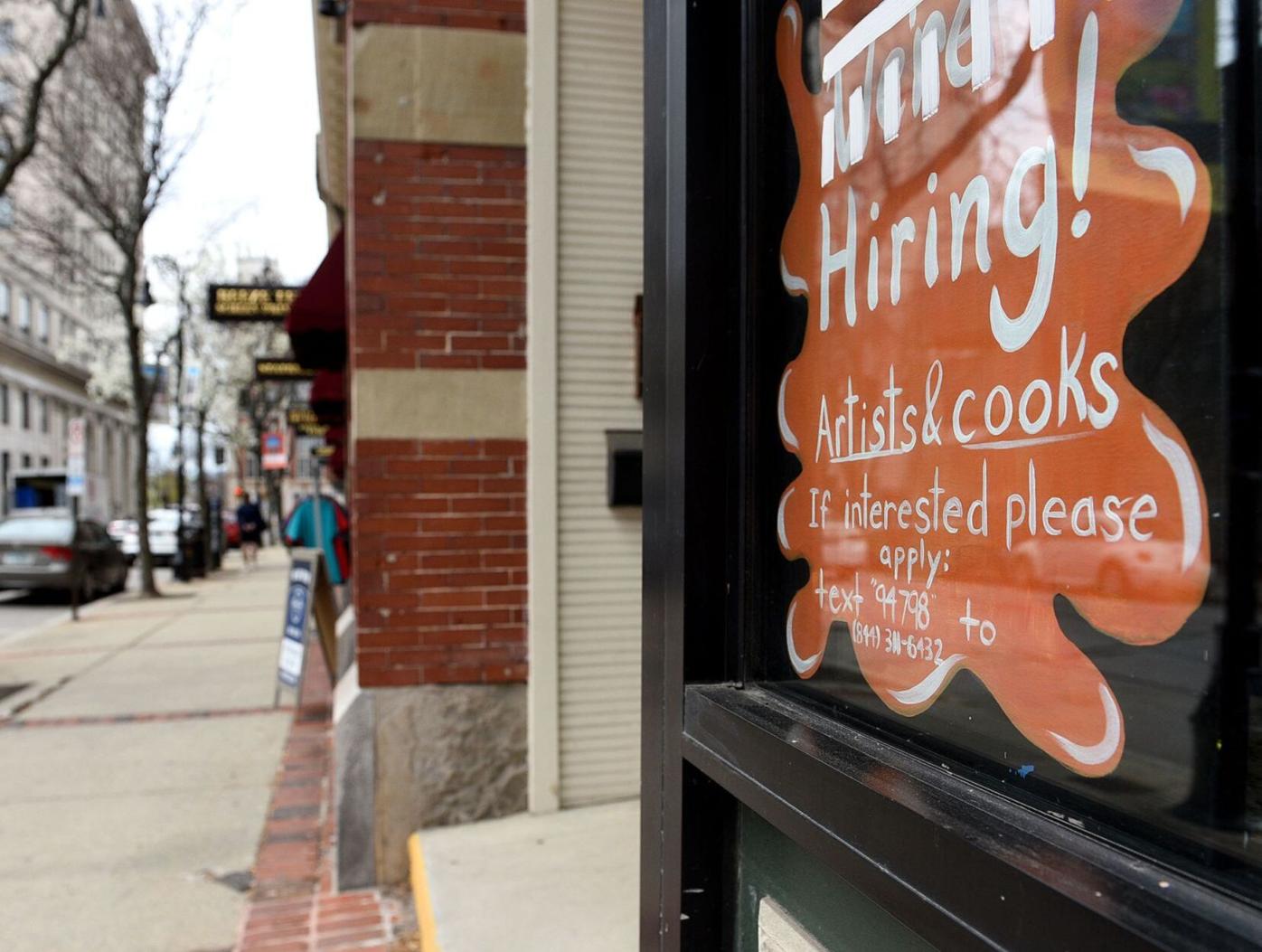 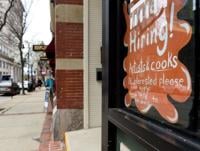 A hiring sign is displayed in the window of Muse Paintbar on Hanover Street in Manchester recently. 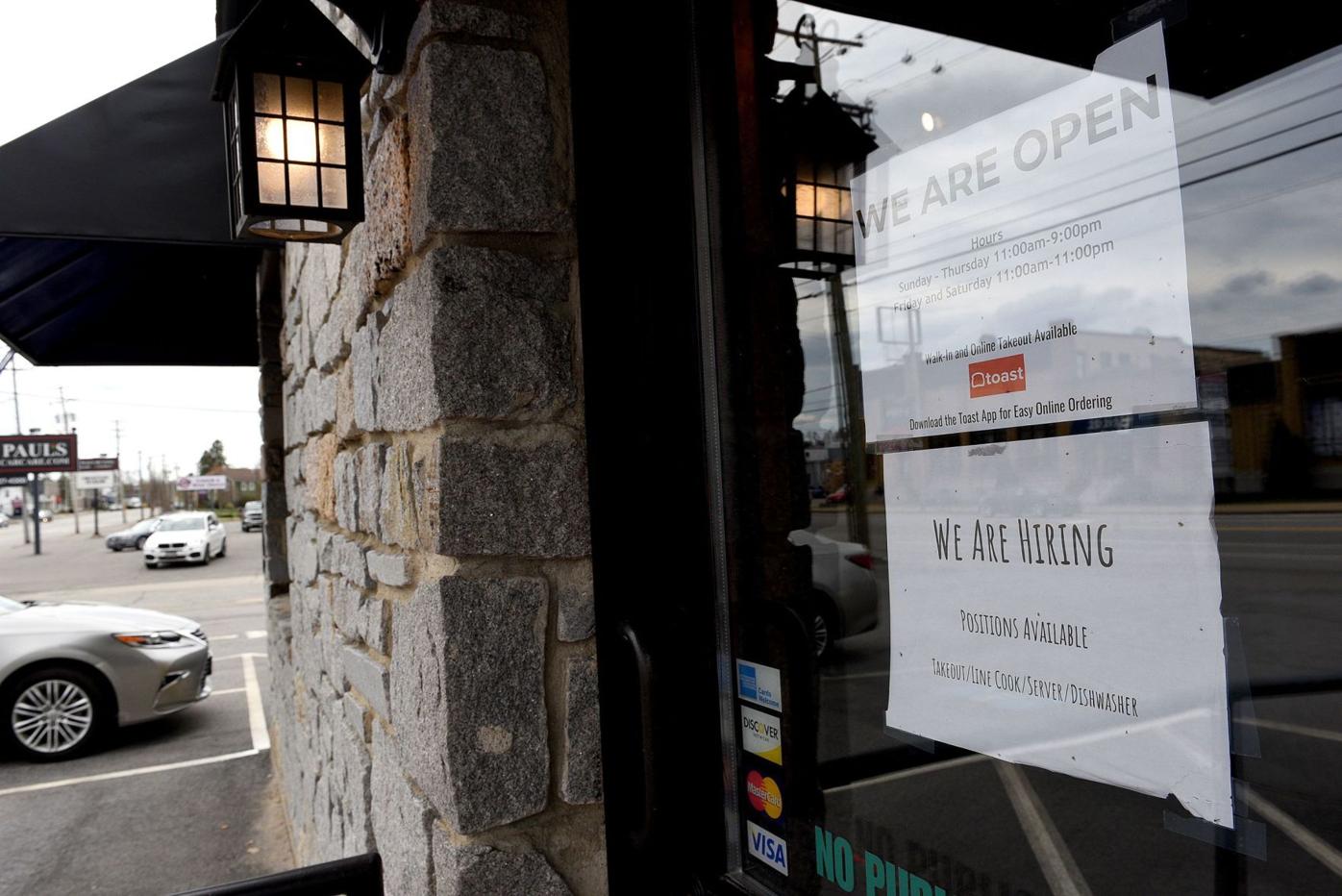 Many businesses in all fields, including Elm House of Pizza in Manchester, are looking to hire workers. 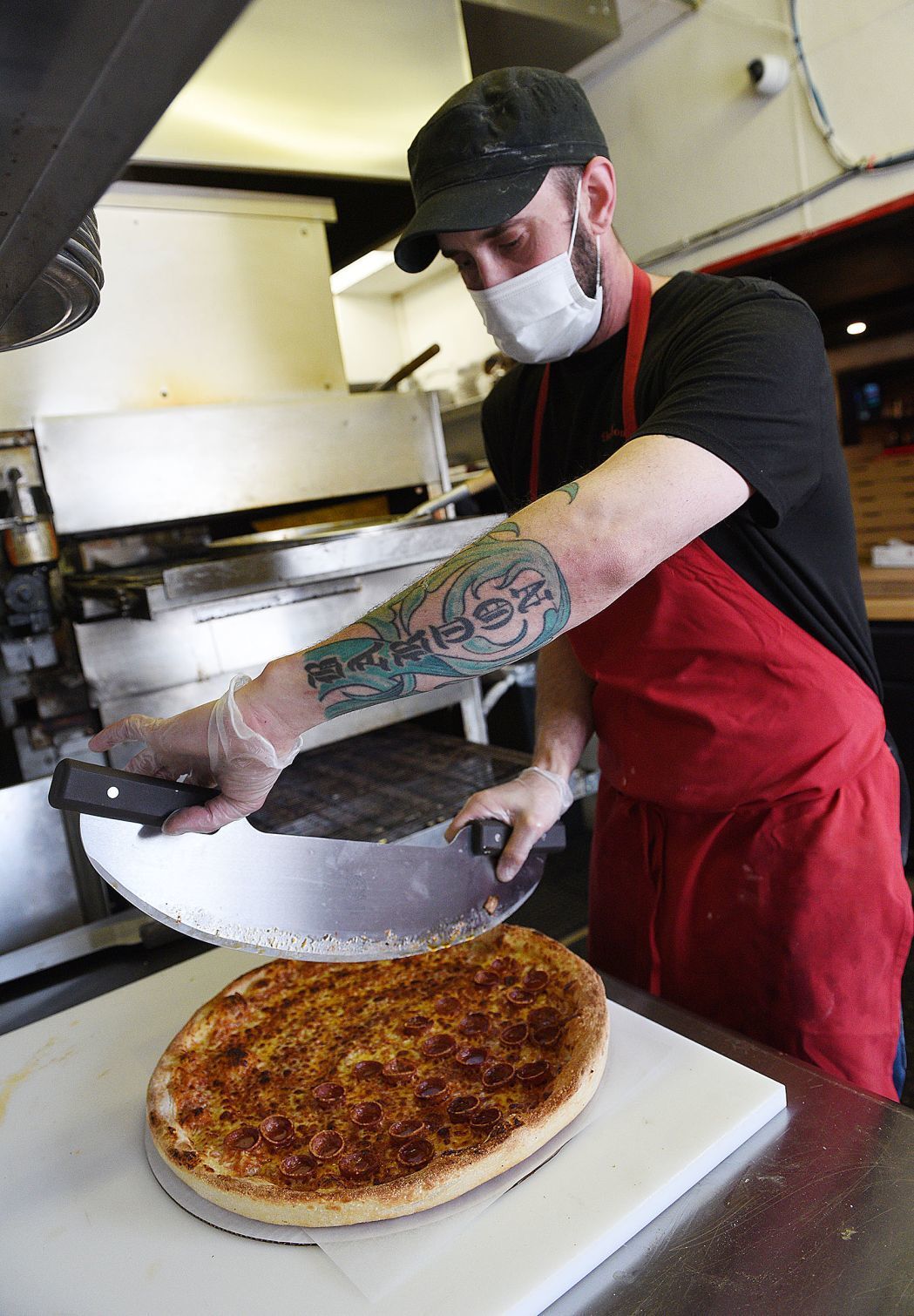 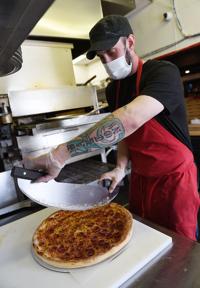 Josh Barton slices a pie fresh out of the oven at Elm House of Pizza in Manchester recently. Elm and three other city restaurants are sharing staff in a move toward flexibility and possibly expanding benefits.

When the Manchester restaurant owner is short on staff at one eatery, he can tap a second one he owns for help. A business partner, Bob Scribner, who owns two other city businesses — The Wild Rover Pub & Restaurant and McGarvey’s Saloon — also shares staff.

Having a pool of 100 workers among the four businesses is allowing the owners to consider providing more benefits, easier than if they were completely separate — and a good way to attract and retain employees.

“I do believe it would give us a competitive advantage,” Baines said.

Employers across industries are combating hiring woes they say are as difficult or worse than before the pandemic.

“The candidate pool shortage is something I’ve never seen in 20 years, not even in the most booming economy,” said Barry Roy, regional president of the Robert Half staffing agency, which has three New Hampshire offices.

Finding people for technology and manufacturing jobs is just as tough as before the pandemic, said Justin Gerwien, with staffing agency Aquinas Consulting. More employers are offering relocation bonuses to entice job seekers, he said.

Companies are “much more flexible in hybrid schedules,” Gerwien said in an interview during a recent virtual technology job fair organized by the New Hampshire Tech Alliance. “People will have more flexibility.”

Flexibility will be key to winning over the hearts of many workers.

A national survey found that 87% of American workers who have been working remotely during the pandemic prefer to continue working remotely at least one day a week. Among all workers, 68% said a hybrid workplace model is ideal, according to a Prudential’s Pulse of the American Worker Survey conducted in March.

Job openings are up statewide and unemployment is trending down.

There were nearly 500 more online ads for New Hampshire jobs in February and March than in the same timeframe in 2020, an increase of almost 2%, according to Burning Glass Technologies and New Hampshire Employment Security.

Health care had the most openings, more than 5,000, but about 100 fewer than the previous year. Retail-type job openings were down almost 700 but still ranked second at about 3,150. Third-ranked manufacturing also saw 375 fewer job ads.

On the flip side, more ads could be found for positions in accommodation and food services, educational services and information fields.

The most sought-after employee type was registered nurses, with 1,200 advertised openings.

Roy doesn’t expect the hiring situation to improve much.

“I think we’re going to continue to see more jobs than people available for those jobs,” he said.

Employers “really have to move a heck of a lot quicker” than normal, progressing through the interview process to making an offer, or they risk losing a worthy hire, he said.

About 11,840 fewer residents were working in March compared to the previous year — a combination of 2,340 more unemployed and 9,500 fewer people in the workforce. Some people are earning less money or working fewer hours than before the pandemic struck.

Jim Roche, president of the Business and Industry Association of New Hampshire, recently wrote to the governor asking to reinstate a requirement that people collecting unemployment benefits search for work.

“Many BIA members in full hiring mode are frustrated over the lack of response to their postings for open positions,” Roche wrote Sununu.

The governor later announced the return of the search-for-work requirement.

Starting May 23, Employment Security will resume requiring claim filers to conduct a weekly work search as a condition for being considered eligible for unemployment benefits.

“This requirement will include contacting hiring employers as well as conducting reemployment activities designed to prepare you for returning to work,” the department’s website stated.

People getting jobless benefits are receiving an extra $300 a week in enhanced federal benefits through early September, for a maximum $727 a week. The average weekly payment in March was $577.26 in New Hampshire.

The state has scheduled 10 virtual job fairs during May to help unemployed Granite Staters find work. Those job fairs will be held before the work search requirement goes back into effect.

Hanover-based Hypertherm, which employs 1,200 in the Hanover-Lebanon area, has about 100 job openings in New Hampshire, more than before the pandemic.

“It’s greater now as demand for our products is exceptionally high and continuing to grow,” said communications manager Michelle Avila.

Hiring is proving more difficult for the manufacturer of plasma and waterjet cutting systems and software.

But not everyone is struggling. GDS Associates, a consulting and engineering firm with an office in downtown Manchester, was looking for potential job hires at the virtual job fair to fill an opening for an energy efficiency engineer.

The occupations that added the most workers over the past year were professional, scientific and technical services, which gained 2,000 workers from March 2020 to last March.

“The prof/sci/tech services has been a growing sector and is a strength of our economy,” said Brian Gottlob, director of the state’s Economic and Labor Market Information Bureau.

“In addition, a high percentage of these jobs can be done remotely and thus did not suffer the kind of reductions associated with industries that require high levels of personal interactions and contact and that were most affected during the pandemic,” he said in an email.

Transportation and warehousing registered the second-highest gain, with 900 more jobs.

They “benefit from the acceleration of the trend toward online retailing during the pandemic that has required more delivery warehouse, logistics, shipping and delivery workers,” Gottlob said.

Hiring remains difficult for many restaurants.

Madear’s Southern Eatery & Bakery in Pembroke filled two openings in the same day recently after posting for workers a few months ago on Facebook, as well as advertising on Craigslist and Indeed.

Co-owner Robb Curry said part of the hiring difficulty might be a “generational thing.”

“It’s also the idea with stimulus and the unemployment extension, that does not help at all,” he said.

Servers are being paid $10 an hour plus tips, which on any given day can raise their total hourly pay to between $45 and $65 an hour, often for a five-hour shift, he said.

The idea, Curry said, is “to get as close to a living wage as we can.”

It’s much harder, he said, to hire now than before the pandemic, when his restaurant operated in Manchester.

Some of his employees quit to “protect” a second, better job because media coverage over the risks of eating indoors in a restaurant produced “a scarlet letter” for dining places, Curry said.

Not every job seeker is finding success right away.

Shen, a student who will graduate in May from Southern New Hampshire University with a master’s degree in information technology, hopes to land an IT job.

He already has sent more than 60 resumes, received 10 responses and secured one interview.

Potential employers at the job fair told him to email them his information.

“I’m trying to optimize my resume” during the job fair, said Shen, who didn’t want to give his last name.