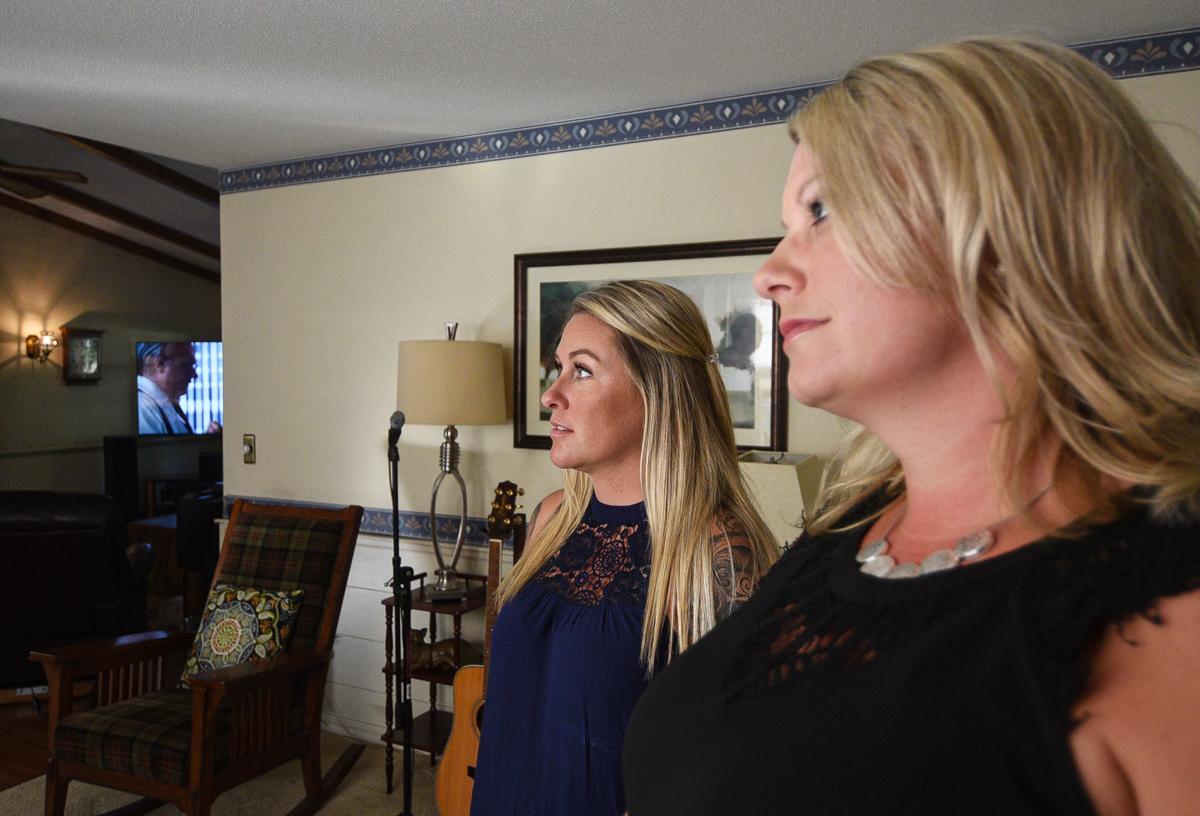 Real estate agent Sophia Weeks, right, with client Frannie Richards, says the lack of available housing is “insane,” and some buyers are losing out even after bidding over the asking price.

Sophia Weeks, right, a real estate agent with RE/MAX Synergy, talks about the house for sale at 3 Oak Lane in Goffstown with client Frannie Richards on Wednesday.

Take Mary Laber and her husband, Barry, who was recently diagnosed with Lewy body dementia and who some days doesn’t know his wife’s name or where he is.

The Nashua couple has waited three years to get into subsidized senior housing and now, with Mr. Laber’s long-term disability payments, makes too much money to qualify.

The Labers don’t have enough equity for a reverse mortgage and still are making mortgage payments on their two-bedroom ranch. Now, they want to downsize and remain in Nashua — where the surroundings are familiar to her husband of 42 years — but the market-rate rents are too high.

“There is no hope for us,” Mary Laber, 72, said last week. “We are taking money out of our savings every month to cover our bills. That will last maybe 10 to 12 months more. Then we’ll have nothing.”

The Labers are trapped in their home — another house that could have gone on the open market, where inventories are low and prices are at record highs.

“I think ensuring there are affordable and diverse housing options is a foundational issue to strengthening our workforce,” said Mike Skelton, president and CEO of the Greater Manchester Chamber of Commerce.

Several obstacles are putting the brakes on new home building, according to housing experts.

“You have exclusionary zoning wherever you go,” said Manchester developer Dick Anagnost. “Through the years, they’ve reduced the amount of density that you can acquire.”

Density is a key concept for controlling housing costs. The more units you can build on the same amount of land, the cheaper the land costs are per unit.

“You’ve got to get more units per acre ultimately,” said Dean Christon, executive director and CEO of the New Hampshire Housing Finance Authority.

Laconia economist Russ Thibeault is the one who issued the estimate of up to 20,000 housing units. “Rather than controlling the pace of development, we need more housing in the state,” Thibeault said. “There’s an imbalance between development regulations and what the state really needs.”

Rents on the rise

New Hampshire’s apartment rental vacancy rate stood at less than 1% compared to 7% nationally and 5% for the Northeast, according to a June survey report by the New Hampshire Housing Finance Authority.

The median gross rent for a two-bedroom apartment, which includes utilities, was $1,456 a month in Hillsborough County and $1,568 in Rockingham County. In five years, rents have surged 26% and 27.6%, respectively.

The Legislature this year approved Senate Bill 43 establishing a commission to study barriers to increased density of land development.

“New Hampshire communities are held back by lack of resources, costly regulations and the lack of municipal support or NIMBYism,” said Elissa Margolin, director of Housing Action NH, a coalition of housing developers, housing financiers, property managers and others.

Zoning plays only a part, according to Cordell Johnston, government affairs counsel at the New Hampshire Municipal Association.

“We have 234 cities and towns, and there are some that are extremely protective and do everything they can and probably more than they should to limit housing development, and then there’s others that are very welcoming,” he said. “As with any problems … there is not one clear answer to what the problem is.”

The state experienced a housing boom during the 1980s with the rise of the computer industry in Massachusetts and southern New Hampshire.

“I think the peak for strict regulation was more like 20 or 30 years ago,” Johnston said. Some towns went so far as to enact moratoriums on building permits.

“I think, if anything, it’s loosened up in the last decade,” he said.

“Specific to young professionals and young families, there is a gap in single-family ‘starter homes,’ which keeps some young people in rental units longer and creates stress and shortage in the rental market,” Skelton said.

Christon and Johnston cited rising costs for land and building materials as other factors boosting home prices. Christon said some materials also are subject to tariffs.

Housing Action NH, along with the National Low Income Housing Coalition, are working on a voter and candidate engagement project called “Our Homes, Our Votes: 2020.” A website tracks what the presidential candidates are offering for more affordable housing.

When it comes to housing choices, many cite a shift in what millennials want — more urban housing where they can walk to places and use their cars less.

But Sophia Weeks, a real estate at Bedford RE/MAX Synergy and a millennial herself, finds millennial buyers — those in their 20s and 30s — don’t share the same buying habits.

Those who are conservative in their spending because of student loans and then those “millennials that just want the biggest house they can get,” she said.

Millennials appear more short-sighted in their outlook than past generations.

“Most of them tell me it’s a five- to seven-year plan, and when they have kids … they’re going to move,” she said. Older buyers “want their forever house.”

“It’s insane,” Weeks said about the lack of available choices. “I have buyers right now, and they’ve put five different offers in that price point, and bidding $20,000 and $30,000 over asking, and still not getting them.”

Student loans also are “coming up a lot more than they used to,” Weeks said.

Nashua-area clergy have banded together and are inviting faith communities to hold services Sept. 27-29 focused on what a flyer termed “a weekend of preaching and teaching on affordable housing in Nashua.”

One family is leaving Nashua for Texas after searching for better housing.

“If you feel you can never escape the housing crunch … then you’ve got to leave,” Newhall said. “How can you start a family if you can never get ahead?”

Welcome to the new world of hiring, pandemic-style.

Landlords banned from evicting tenants during the coronavirus pandemic can begin the eviction process as soon as Wednesday in what one legal assistance attorney predicted will be a “tsunami” of displaced tenants.

An online game that lets students learn about stem cells and tissue engineering also offered them information about high school and college internship programs to further spur their interest in regenerative medicine.