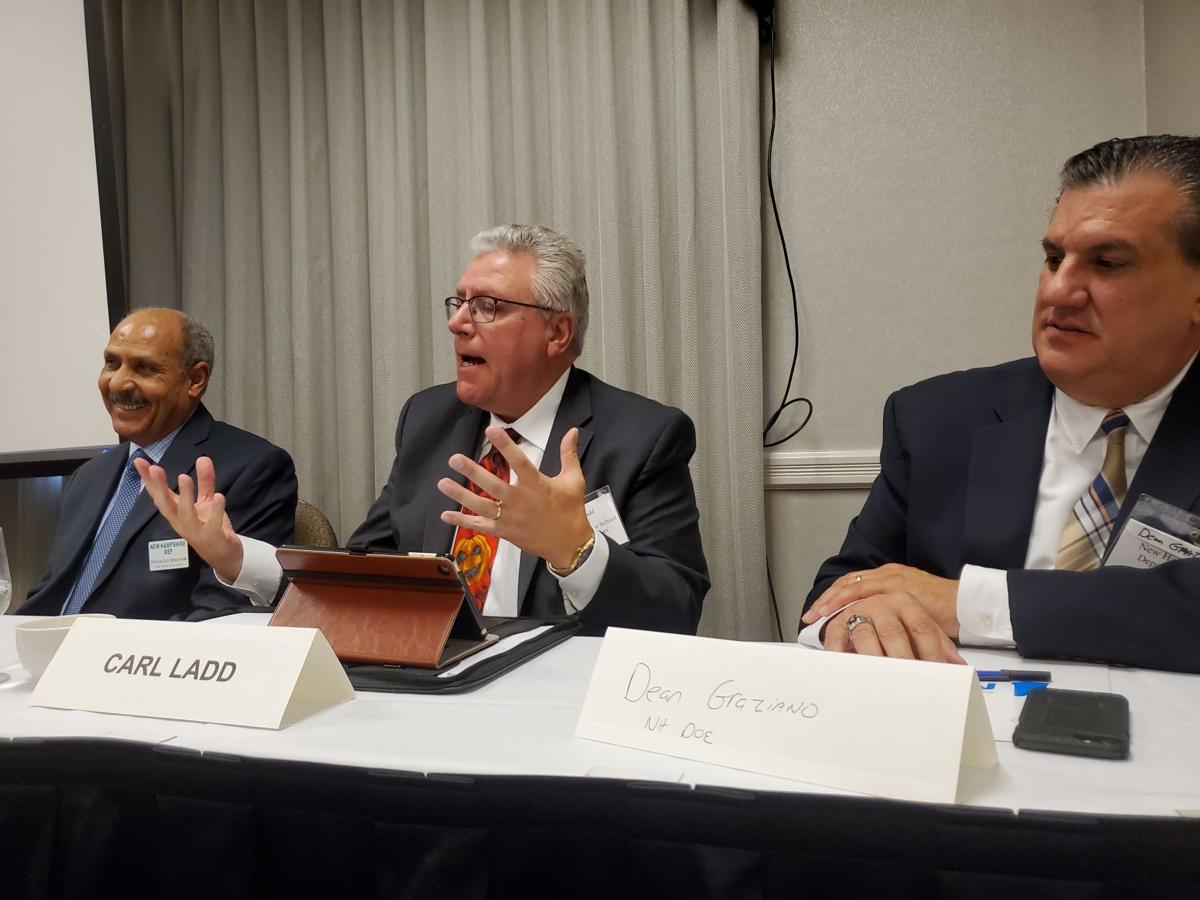 A panel discussion in Concord last week on building a workforce in manufacturing included, from left, Zenagui Brahim, president of the N.H. Manufacturing Extension Partnership, Carl Ladd of the N.H. School Administrators Association, and Dean Graziano of the state Department of Education.

CONCORD — Building a pipeline of future workers could be as simple as getting a federal grant to buy and renovate an RV.

Employees at Career & Technical Education centers and area businesses can take turns booking the 35-foot recreational vehicle to roll into school parking lots to market CTE course offerings — from welding to information technology — and to build curiosity and perhaps hook tomorrow’s workers, according to Dean Graziano, apprenticeship coordinator at the state Department of Education.

“It makes a virtual field trip at no cost to schools,” Graziano said after a panel discussion at the governor’s advanced manufacturing and high technology summit at the Grappone Conference Center last week.

The RV, delivered to a Chichester dealership on Friday, will undergo modifications before appearing in Christmas parades in Dover and Rochester next month. The RV will start visiting schools in the new year.

Wheels are in motion to help businesses develop new workers.

During a school visit, Graziano said, instructors and employers, for example, can show fifth-graders a video on car-repair careers on an 80-inch TV screen outside the RV, and bring along a car or two for them to check out in person what they see on the video.

“It’s really to get them to start thinking,” Graziano said, by letting the fifth-graders know that they can be tinkering with cars in a classroom in five years, and by their senior year in high school, getting an apprenticeship and earning school credit.

The panel discussed ways to build the future workforce in manufacturing, which employs nearly 70,000 in New Hampshire. The number of manufacturing jobs in the state has dipped by around 1,100 jobs compared to a year ago.

“I see labor as such a critical issue,” said Brian Gottlob, director of the state Economic & Labor Market Information Bureau, during a separate panel.

Young people “hear all the time that manufacturing isn’t growing,” Gottlob said. “Well, it doesn’t have to grow for there to be a ton of good jobs.”

That’s because a third of the manufacturing workforce is poised to retire in the next decade, he said.

“Industry has to play a major role in the future of the younger generations,” said Zenagui Brahim, president of the New Hampshire Manufacturing Extension Partnership, which helped organize the event.

Another way to create new manufacturing workers to replace retiring ones is through apprenticeships, where people learn skills on the job.

ApprenticeshipNH, through the Community College System of New Hampshire, has garnered more than $2.5 million in federal grants to pay staff to help companies that want to set up apprenticeships.

The program prepares workers as registered apprentices. Employers can ask to enroll existing employees through the apprenticeship program or request new recruits.

The employer pays the apprentice starting on the first day.

“The grant kicks in some funding for the related instruction to take college courses, and the employer pays the rest,” she said.

Nearly 200 people are currently enrolled in apprenticeships, which often take two to three years to complete. About half are current employees who need extra training, while the rest are unemployed or underemployed.

“Assist people who aren’t able to work for whatever reason,” Doiron said. “They have some barrier to employment.”

That could mean helping to pay for transportation or child care costs during the apprenticeship.

She thinks the program is a win for employers because apprentices will show their loyalty after completion. “They feel like someone has invested in them, and they tend to stick around,” Doiron said.

Meanwhile, there needs to be a change in attitude among some parents about how they think about preparing their children for the workforce, according to one panelist.

Carl Ladd, executive director of the New Hampshire School Administrators Association, held up his iPhone 10 and said it contains so much knowledge.

“The world is changing so rapidly that we need to be in the forefront of that,” Ladd told more than 50 people in attendance.

“The problem that we run into, I think, was that there’s such a tension between the future and looking at where kids need to be and where the communities hold school in their memory,” he said.

“As we start to try and move and change things, we’re finding a lot of pushback from communities, saying, ‘Well, it was good enough for me. This is the way I was told, this is the way I learned, we need to keep doing what we’re doing.’ So there’s a real tension there, and I think that we are in the business of educating all students,” Ladd said.

The question to ask, he said, is “What does the business world need from public education? I don’t think we’ve had this conversation in a very long time.”

A million-dollar cure? A worldwide pandemic pushed a Boston couple to spend $2.4 million for a Portsmouth home offering water views, a remodeled kitchen and 5,000 square feet to spread out on an acre lot with a boat dock.

Welcome to the new world of hiring, pandemic-style.

Landlords banned from evicting tenants during the coronavirus pandemic can begin the eviction process as soon as Wednesday in what one legal assistance attorney predicted will be a “tsunami” of displaced tenants.