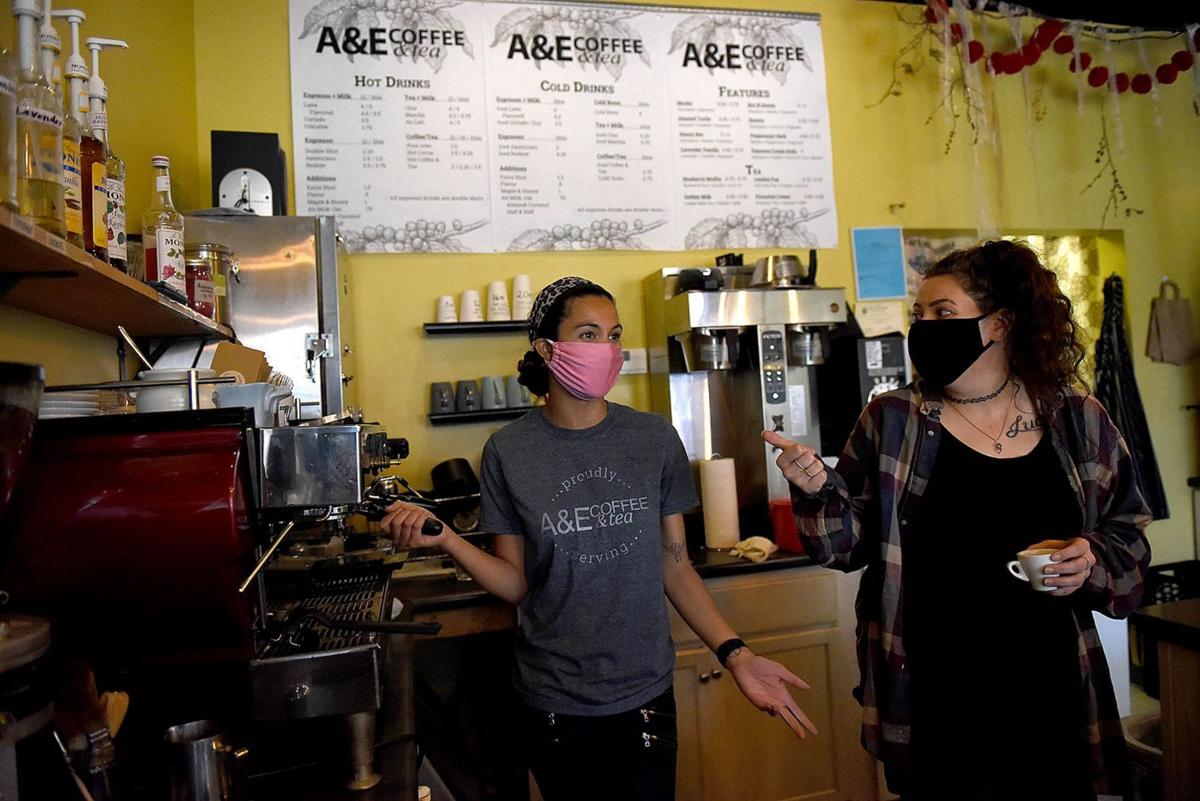 Michalie Williams, left, and Samantha Chiavelli speak with a reporter at A&E Coffee & Tea in downtown Manchester last week. The shop shut down in March and reopened three months later. Chiavelli said unemployment compensation, including the supplemental $600 a week from the federal government, more than replaced her paycheck, but still, “I would have come back sooner.”

For a range of reasons, women have felt the brunt of job cutbacks during the coronavirus pandemic in New Hampshire — the opposite of what happened in previous recessions, which fell more heavily on men.

Take Kim Wade, who jumped from a Fortune 500 company to an exciting tech startup in Nashua last year.

“Sometimes, you have to step out of that comfort zone,” the Londonderry woman recalled.

On April 13, she found herself out of her comfort zone again. Her company cut 20% of its workforce, including her position as an account manager.

“It was definitely a surprise when you get a phone call from the vice president of the company on a Monday morning and you don’t have any meetings scheduled,” said Wade, 40, who is still looking for a job this Labor Day weekend.

She is one of tens of thousands of women who the pandemic has driven from the workforce since mid-March.

Nearly 3 in 5 New Hampshire workers collecting unemployment from April through June were women, reversing the trends of previous recessions. The numbers were reversed during the Great Recession in 2008-09 and the 2002 recession, according to Employment Security.

Despite making up 46.2% of the state’s labor force, women accounted for 58.6% of those on unemployment this past April through June.

“The industries that were hardest hit initially — hospitality, personal care, educational services, health care, and to a lesser extent retail — are industries with a large majority of women employees,” said Brian Gottlob, director of the state’s Economic and Labor Market Information Bureau.

On the home front

The shift occurred quickly, as many parts of the state’s economy started shutting down in mid-March, a month that saw nearly 1,000 more men than women collecting unemployment, according to state Employment Security figures.

In April, 19,000 more women than men were receiving such benefits — more than the population of Goffstown.

“Women make up a significant proportion of the health care workforce, CMC’s included,” she said. “This is the case in both clinical, business and support roles. The positions affected by furloughs and cutbacks reflected our workforce as a whole.”

When schools shut down last spring, parents had to scramble to handle remote learning at home.

“The mental burden can be tough, and I’m sure it can impact performance,” she said. “Also, with voluntary layoffs, women may find it to be easier to step away from professional life to focus full-time on care right now,” Herrmann said. “Also, in companies where there is limited flexibility, it becomes impossible to be both parent and worker right now.”

In fact, over the course of the pandemic, 6,100 workers receiving jobless benefits cited family care as a reason for not working, according to Gottlob.

“Because women disproportionately are family caregivers, this likely has had some impact on the percentage,” Gottlob said. “But with over 6,000 during the pandemic receiving benefits, it is clearly not the primary reason for women comprising a larger share of the unemployed this time around.”

Stephen Tower, a staff attorney at New Hampshire Legal Assistance, said he is seeing more women than men looking for help with unemployment and eviction issues.

“Personally, the majority of clients I’ve seen who otherwise could return to work either have a spouse or an adult family member living with them who is severely at risk for the virus,” Tower said Friday. They generally can collect unemployment benefits, he said.

Nationally, the pandemic has erased job gains made by women over the past decade.

Between the end of the Great Recession in July 2010 and the start of the COVID-19 crisis in February 2020, women gained 11.1 million jobs, according to the National Women’s Law Center, a non-profit advocating for women’s rights.

On Friday, the national jobs report for August showed women 16 and older have rebounded more quickly in the job market than men since April, but their unemployment rate remains higher.

Meanwhile, Manchester’s downtown, where many women work, hasn’t returned to its pre-pandemic pace.

A&E closed on March 23 and reopened in late June. Today, the Elm Street shop is still operating with reduced hours.

Chiavelli, 30, said collecting unemployment while the benefit included an extra $600 a week from the feds more than replaced her paycheck.

While “the extra money was nice,” she “would have come back sooner” if the coffee shop had reopened earlier.

Chiavelli thinks some employers cut female workers based on their gender.

She said she thought they did what was best for employees, thinking some were better off at home.

Londonderry’s Wade has gone through six job interviews, though they often are followed by silence. Unemployment hasn’t covered her previous paycheck.

In networking with people from earlier in her career, she’s learned an important lesson.

“I don’t think automatically people know you are laid off,” and those people could help connect you with a new position, she said.

“I really think things happen for a reason,” she said. “I certainly can’t look back.”