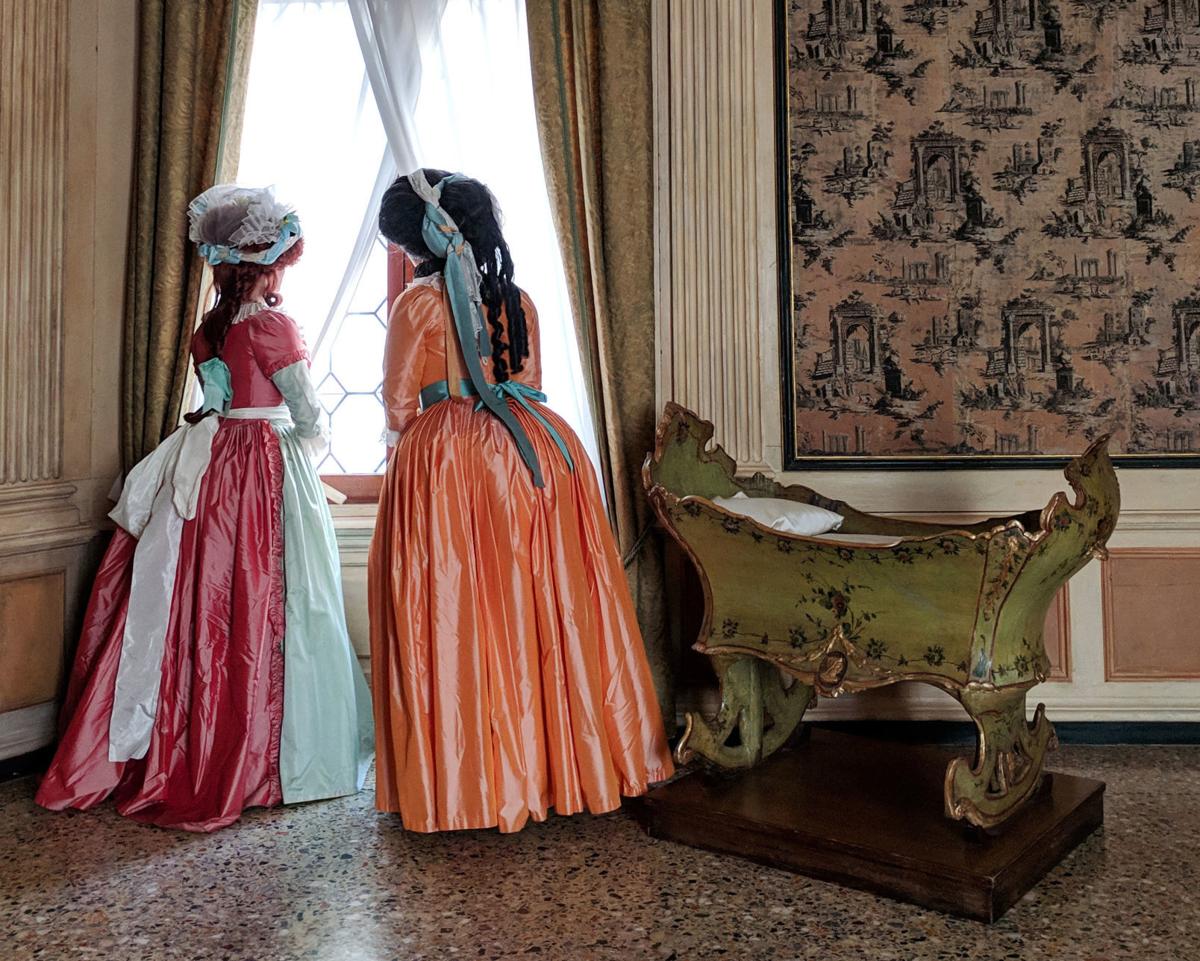 Carolyn Dowdell, left, and Taylor Shelby appear in costume at the window of a Venetian palazzo during Venice’s Carnival in February. “It adds a depth and an immersive element to the experience when you’re in an environment that is genuinely historical,” Dowdell says. 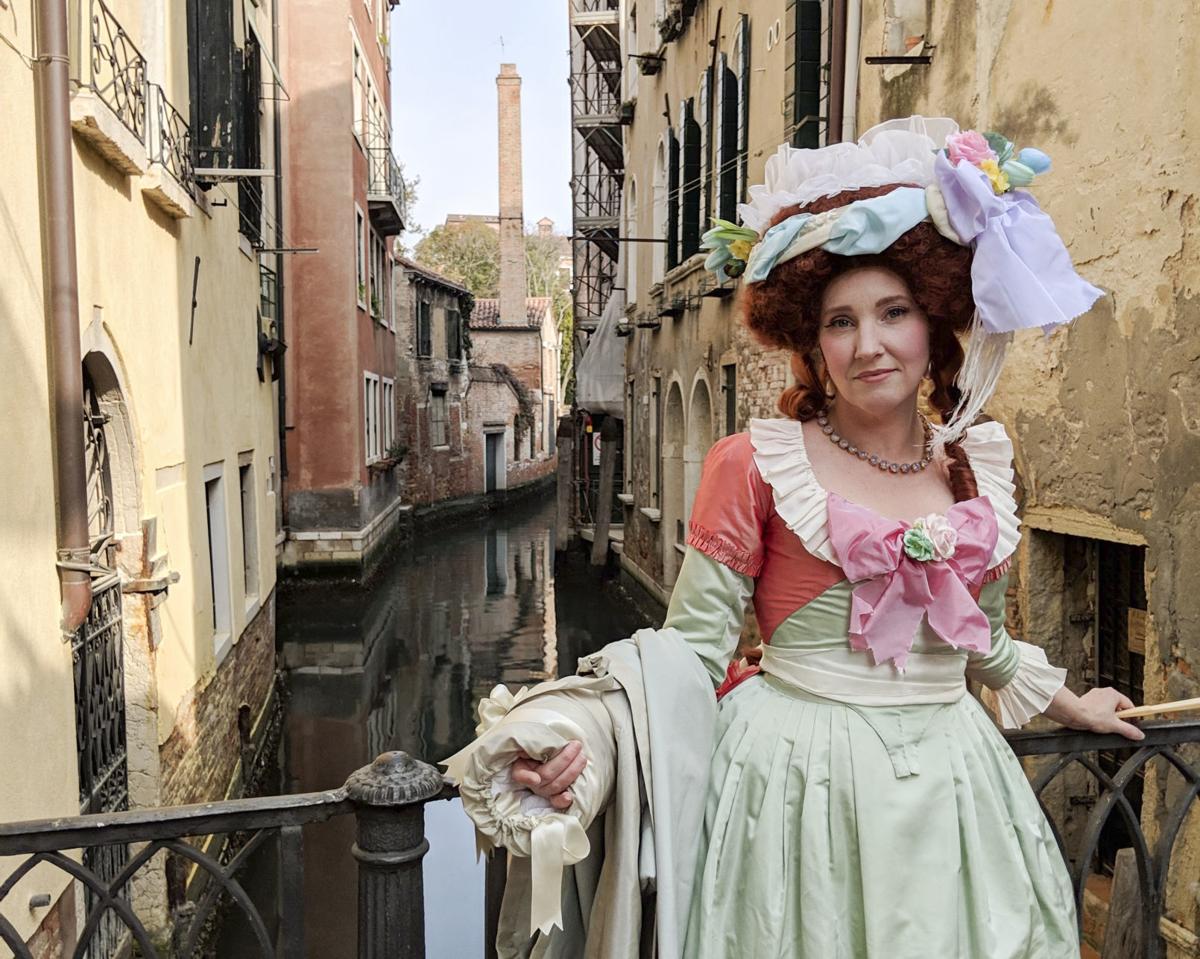 Carolyn Dowdell, above, says she and Taylor Shelby got the occasional stare or request for a photo when they were in costume on the streets of Venice during the daytime. 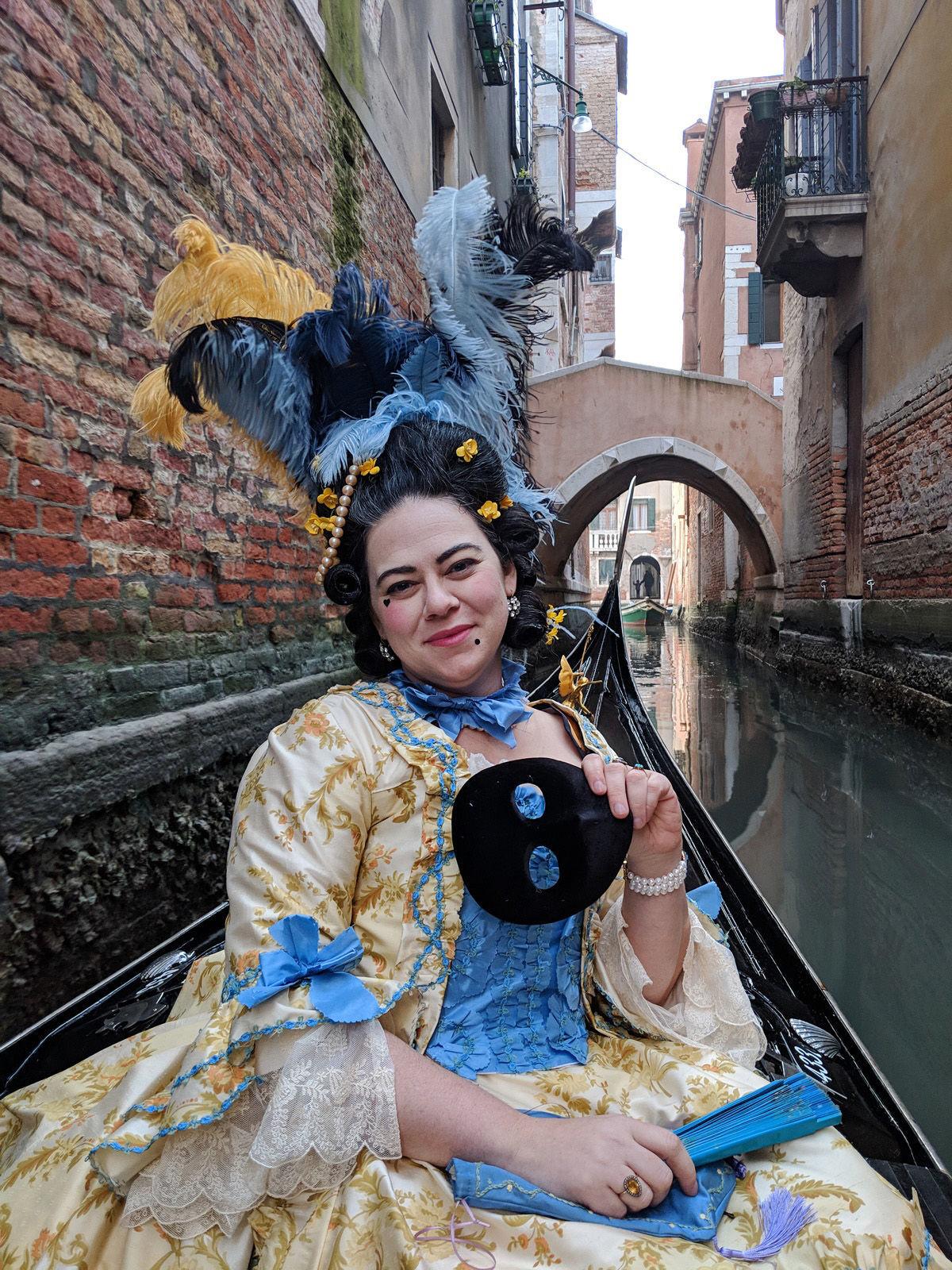 Taylor Shelby, riding on a gondola through Venice, brought four outfits on the trip, plus two robes and peignoirs for lounging. She spent six months sewing her costumes. 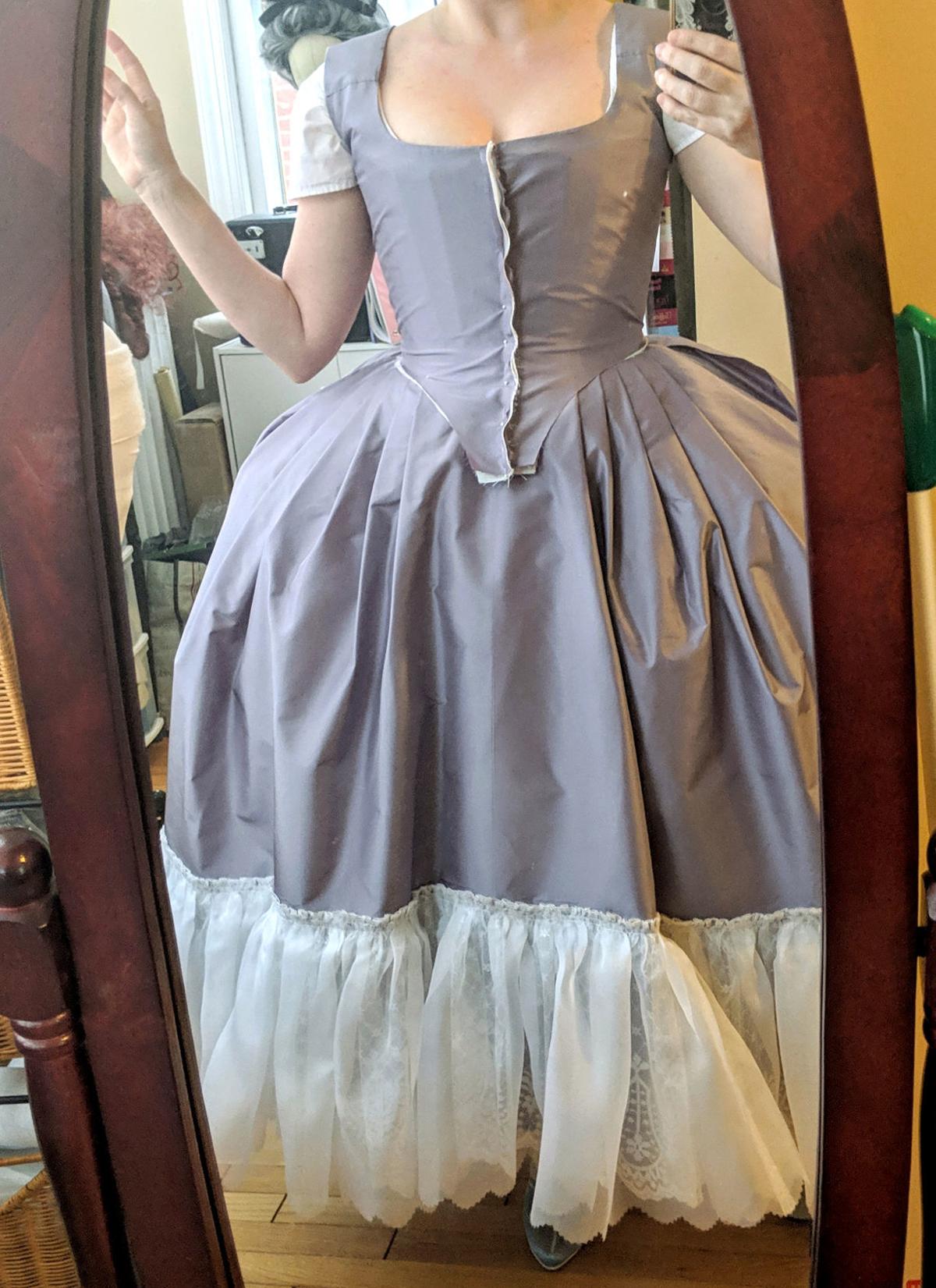 Carolyn Dowdell tests the fit of a bodice with a partially finished petticoat.

With suitcases full of handmade dresses, skirt supports, petticoats, corsets and wigs, Taylor Shelby and a group of five friends flew to Venice’s Carnival in February with one goal in mind: to live like 18th-century women of means.

Shelby, a 36-year-old reproduction jewelry designer who lives in Washington, D.C., and runs the website Dames a la Mode, is part of a growing number of would-be time travelers, people who plan their vacations around the past. Festivals in cities such as Versailles and Venice are giving international travelers like her the opportunity to don period-specific clothing and frolic as if in another age.

Recent viral sensation Zack MacLeod Pinsent, a 25-year-old bespoke period tailor in Brighton, England, who wears only Regency, Edwardian and late Victorian clothing (he burned his last pair of jeans when he was 14), frequently travels for historic getaways.

“I’ve gone to historical events in Europe, like Regency weekends in Malta and Italy, and I’ve done some in Paris,” he says. “There are these amazing moments when I go to a historical place and think to myself, when was the last time someone was wearing this outfit in this place?”

For costume enthusiasts like Shelby and Pinsent, Versailles’ Fêtes Galantes — a one-night-only, baroque-themed throwdown in the French royal residence — provides just that kind of time-hop sensation. Varying price tags and levels of participation — from a Hall of Mirrors grand ball (about $150) to an elegant feast, complete with unlimited buffet, private visit to the Royal Opera and a dedicated cloakroom (about $570) — lure roughly 700 guests each year with the promise to party like the Sun King. But for her money, Shelby says Venice’s Carnival offers a lot more time to indulge.

Carnevale di Venezia has been entertaining travelers for centuries. Though it began as a celebration of the Venetians’ victory over Aquileia in 1162, the city eventually turned it into a pre-Lent festival. Carnevale translates into meat (“carne”) and farewell (“vale”).

As Thomas Madden writes in “Venice: A New History,” the Venetians had noted by 1600 that the number of foreign visitors swelled during Carnevale , and they realized they could capitalize on tourist revenue by extending the celebrations as long as they wanted, from weeks to months.

Padding the calendar with even more diversions — opera, plays and plenty of prostitutes — Venice quickly became a must-stop destination for 18th-century gentlemen on their Grand European Tours, and Carnival, with its seductive promise of masked anonymity, made it an even more powerful draw. By 1700, Madden writes, nearly 50,000 people were showing up for the festivities.

Today, Carnival is two weeks long and culminates on Fat Tuesday, the day before Ash Wednesday, but many of the same attractions persist. With varying levels of merrymaking to partake in, 3 million visitors will descend on the Venetian lagoon next year from Feb. 8 to Feb 25. Most of those revelers will be wearing rental costumes, many choosing the Commedia dell’arte classics popularized in the 16th century, including Harlequin, the witty rake; Pantalone, the aging merchant; and the Doctor, with the half mask featuring the famously long nose.

But for history connoisseurs good with a needle and thread, the combination of the festival atmosphere and rich architecture make it an ideal setting to strut about in homemade 18th-century duds.

“One day we toured the Ca’ Rezzonico museum, and there weren’t a lot of visitors,” says Shelby. “In the 18th century there was this fad where European tourists would go to places like Italy and look at fancy houses and art, and it felt very much like we were 18th-century tourists who were looking at a beautiful Italian home full of art because the museum is just so immersive.”

Immersion is the key here. Shelby spent six months sewing her ensembles, which spanned a couple hundred years; fantasy-style Mucha dresses, Moulin Rouge-inspired outfits and an 18th-century ballet costume. She says the costly reams of fabric, $600 round-trip flight and $3,300 Airbnb palazzo split among six people were a small price to pay for gondola rides, Piazza San Marco parades, and going to parties clad in layers of reproduction shoes and stays.

Travelmate Carolyn Dowdell agrees. The 41-year-old dress historian, who has a doctorate from Canada’s Queens University and runs the website Modern Mantua-maker, says that while she and her compatriots have shared plenty of fun afternoons in costume at Colonial Williamsburg or at dinner parties she’s hosted at the historic Capitol Hill home in D.C. she shares with her husband, there’s something about strolling in a Francaise gown down a narrow Venetian alley that’s akin to hopping in Doc Brown’s “Back to the Future” DeLorean.

“It adds a depth and an immersive element to the experience when you’re in an environment that is genuinely historical,” she says. “It makes you feel a bit more like you’ve actually time traveled.”

To get the right effect, Shelby brought four outfits, plus two lounging ensembles featuring a robe and peignoir. Dowdell packed seven. With an investment of roughly $500 in supplies, including 47 yards of fabric in addition to notions like feathers and ribbons, she says her only major purchase was a custom-styled wig. That said, Dowdell confesses that during the day the travelers often wore modern-day streetwear.

Night was a different story. Thanks to a fixer in their party, the women had ins at all kinds of private events, including the Black and White Dinner, a Bohemian-themed fete; and the Medianoche Venitien, a 17th- and 18th-century-themed harpsichord concert where the guests (many multilingual) spoke English, French and Italian. So how would a Carnival first-timer find out about these intimate gatherings? “You have to have a sherpa,” says Dowdell, meaning a Carnival insider to hook you up. Dowdell suggests visiting Caffè Florian to gather party intel. “That is sort of like Carnival Central,” she says. “That’s where the people who are in the know hang out.”

Of course, there are plenty of public parties with tickets for purchase. The candlelit Mascheranda Grand Ball, for instance, takes place in Palazzo Pisani Moretta and offers attendees a masked palace gala with tickets starting at about $270 and reaching up to about $1,450 for VIP treatment complete with costume rental. Pro tip: The 18th century tends to be the “go-to” period for Carnival in general, but by no means does everyone do it. “Costumes totally run the gamut,” Dowdell says. “Some were more elaborate, more stylized than ours, some were less so.”

On the days the women did wear their historical costumes from sunup to sundown, they got the occasional stare or request for a photo, but Dowdell insists the trip was in no way an attention-seeking exercise.

“We don’t really like the attention,” she says. “We just enjoy visiting the past.”

And she does mean visiting.

“We all appreciate the advantages of modern life: penicillin, modern dentistry, Tylenol, toilet paper, voting, all of these things you wouldn’t have back then,” she adds. Not to mention the freedom for women to travel independently, something not done even during the height of the Grand Tour craze, when a lady of privilege had to be accompanied by a companion such as a benevolent aunt.

But that’s of little matter. When you’re playing pretend, you get to make your own rules, and that means setting the time machine for 1775, albeit via Carnevale di Venezia 2020.

Shelby and Dowdell’s time-traveling troupe is already planning next year’s trip. “We’re going for longer so we’ll have a bit more time to walk the streets and find quiet areas where the tourists aren’t,” Dowdell says. She’s also eagerly anticipating another costume-clad gondola ride to top last year’s canal cruise. “We were just a group of women hanging out in our Francaise gowns, and, God, we were kind of fabulous,” she says, adding: “It was like, okay, this is the way to experience Venice.”

A coffee house situated in Piazza San Marco, it's a hub of information on Carnival. Open daily 9 a.m. to midnight. Entrees start about $14.

Like a snapshot of Venice's heyday, this palace holds a vast collection of 18th-century art including paintings, sculptures, frescoed ceilings and furnishings. Open Wednesday through Monday 10:30 a.m. to 4:30 p.m. November through March and 10:30 a.m. to 6 p.m. April through October; closed Tuesday. General admission tickets about $13.50; about $11 for children, students and seniors.

This Gothic palazzo and the former home of artist Mariano Fortuny showcases his salon including his tapestries, paintings and lamps. Open Wednesday through Monday 10 a.m. to 6 p.m.; closed Tuesday. Open for temporary exhibitions only. "The Fortuny: A Family Story" open until Nov. 24. Tickets about $13.50 for adults and about $11 for children and seniors.

RICHMOND, Va. -- Thousands of armed gun-rights activists filled the streets around Virginia's capitol building on Monday to protest a package of gun-control legislation making its way through the newly Democratic-controlled state legislature.