MANCHESTER — Defense lawyers for Justin Moura, the city man charged with murder outside Club ManchVegas last March, are adding a second strategy for his upcoming trial — that an involuntary muscle contraction caused him to fire the gun that killed the passenger in an SUV as it veered toward him and he lost balance.

Moura’s public defenders have enlisted an expert physiologist to discuss the involuntary contraction and “reactive gripper response,” which caused his right hand to squeeze the gun.

It is the first of several complicated legal issues that must be decided before Moura’s trial, which is scheduled for March 9.

Appearing in Hillsborough County Superior Court on Monday, a homicide prosecutor agreed that the expert can testify about involuntary muscle contractions. But he asked a judge to prevent the expert from drawing any conclusions about Moura’s intention to commit a crime. That should be left up to the jury, said Shane Goudas, a prosecutor with the New Hampshire Attorney General’s office.

“It is not the expert’s place to act as the 13th juror,” Goudas said. Judge Amy Messer said she will issue an order later.

Moura faces a charge of second-degree murder in the March 2, 2019 death of Tanya Hall, a passenger in a Jeep Wrangler that was leaving the parking lot after Hall’s boyfriend, Jeremy Winslow, got into a confrontation with Moura and members of his Bro men’s club both inside and outside of Club ManchVegas.

In previously filed papers, his lawyers have said that Moura may claim self defense, claiming that Moura, an Iraq combat veteran, was struck in the parking lot by Winslow’s SUV and his “fight or flight” reaction kicked in. In that notice, they say the gun fired accidentally.

Defense lawyers have consulted with Roger M. Enoka of Boulder, Colo., who describes himself as a human movement consultant. 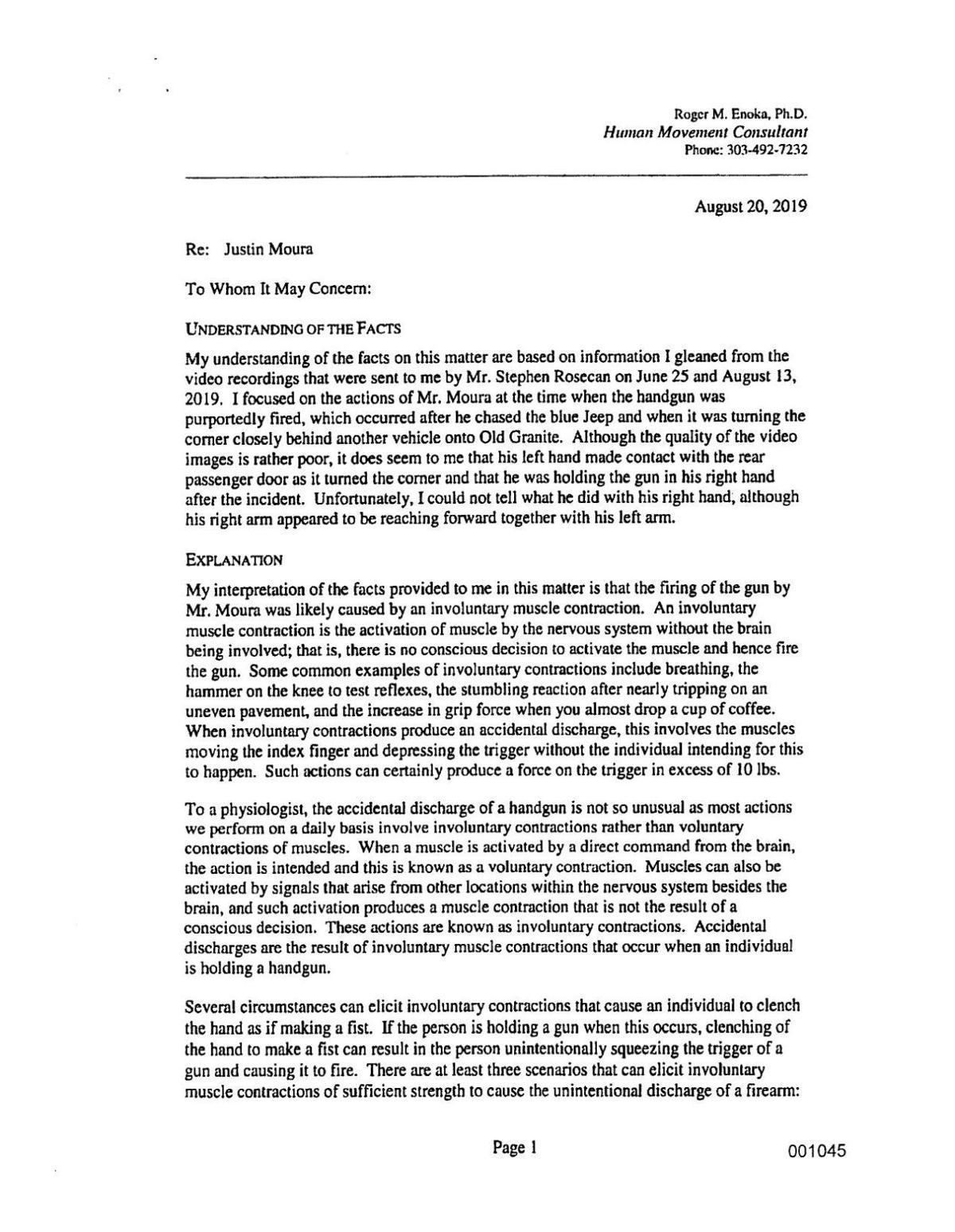 After viewing videos of the shooting, Enoka said it seems that Moura’s left hand made contact with the rear passenger door as the Jeep turned the corner onto Old Granite Street. He wrote that “involuntary muscle contraction” likely caused the gun to fire.

“I put my hands up — thinking I’m gonna get smashed by this Jeep and braced for impact, and boom, I heard the gun go off,” Moura told police, according to court records.

Moura’s public defender, Stephen Rosecan, stressed that Enoka is an expert on physiology who can shed light on a very complex issue that would be beyond the knowledge of a jury.

“This isn’t a psychologist. This is somebody who’s studied the inner workings of the human body,” he said.

Prosecutors have made several filings in court to limit Moura’s defense.

They don’t want defense lawyers to disclose results of blood tests on Hall.

They don’t want lawyers telling the jury about statements that Moura gave to police during an hour-long interview; those include him admitting to the shooting, saying it made him sick to his stomach, and offering to be as cooperative as possible.

Prosecutors also want a judge to decide whether defense lawyers can claim self defense when Moura is charged with killing Hall with a reckless state of mind, which implies no intention to kill a person.

In 2013, the state Supreme Court noted that it has never had to address the specific issue.