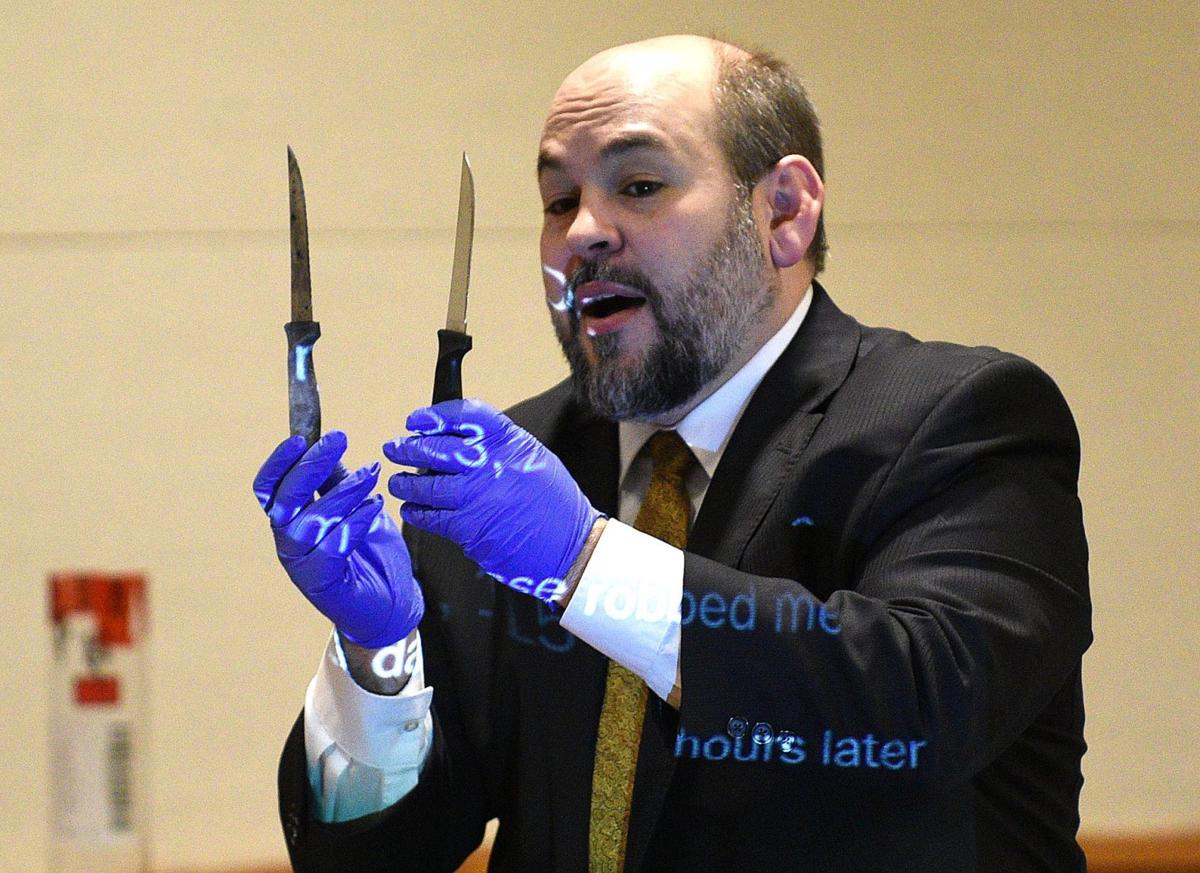 Standing in the path of a projected slide, Senior Assistant Attorney General Benjamin Agati holds up two steak knives, one of which Daswan Jette allegedly used to stab Sabrina Galusha in 2017, during closing arguments in Daswan Jette’s murder trial at Merrimack County Superior Court in Concord on Monday. 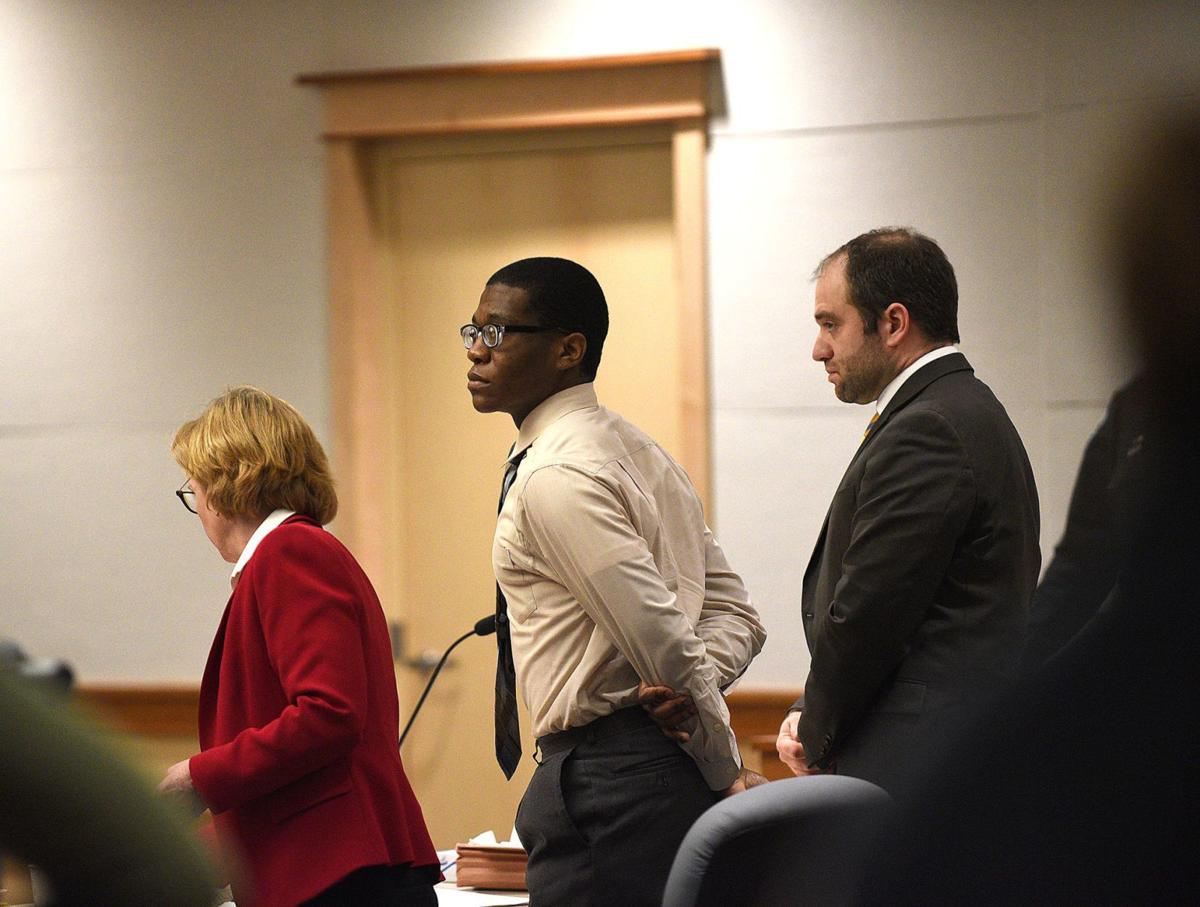 Daswan Jette, center, stands with his lawyers during his trial in Merrimack County Superior Court in Concord on Jan. 27, 2020. 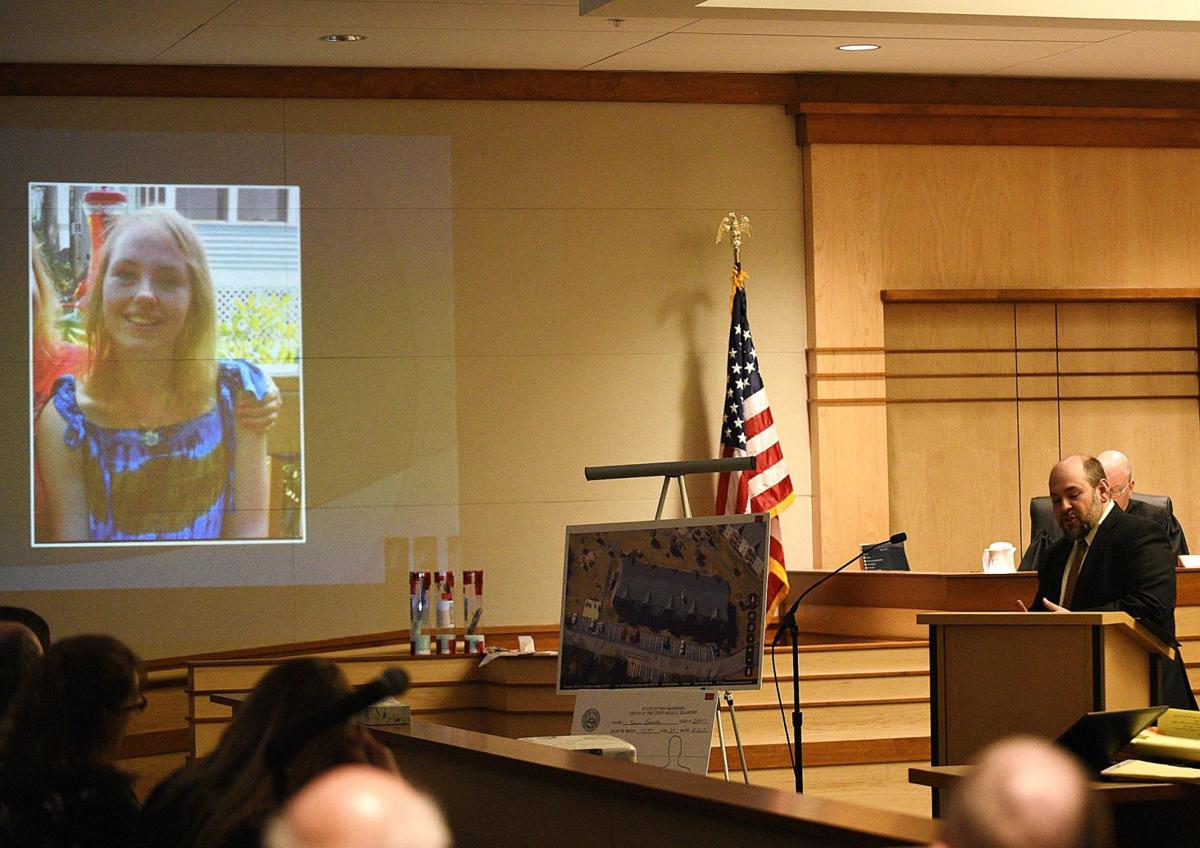 Senior Assistant Attorney General Ben Agati gives his closing remarks during the trial of Daswan Jette at Merrimack County Superior Court in Concord on Jan. 27, 2020. At left is Daswan's alleged victim Sabrina Galusha is projected on the wall for the jury. 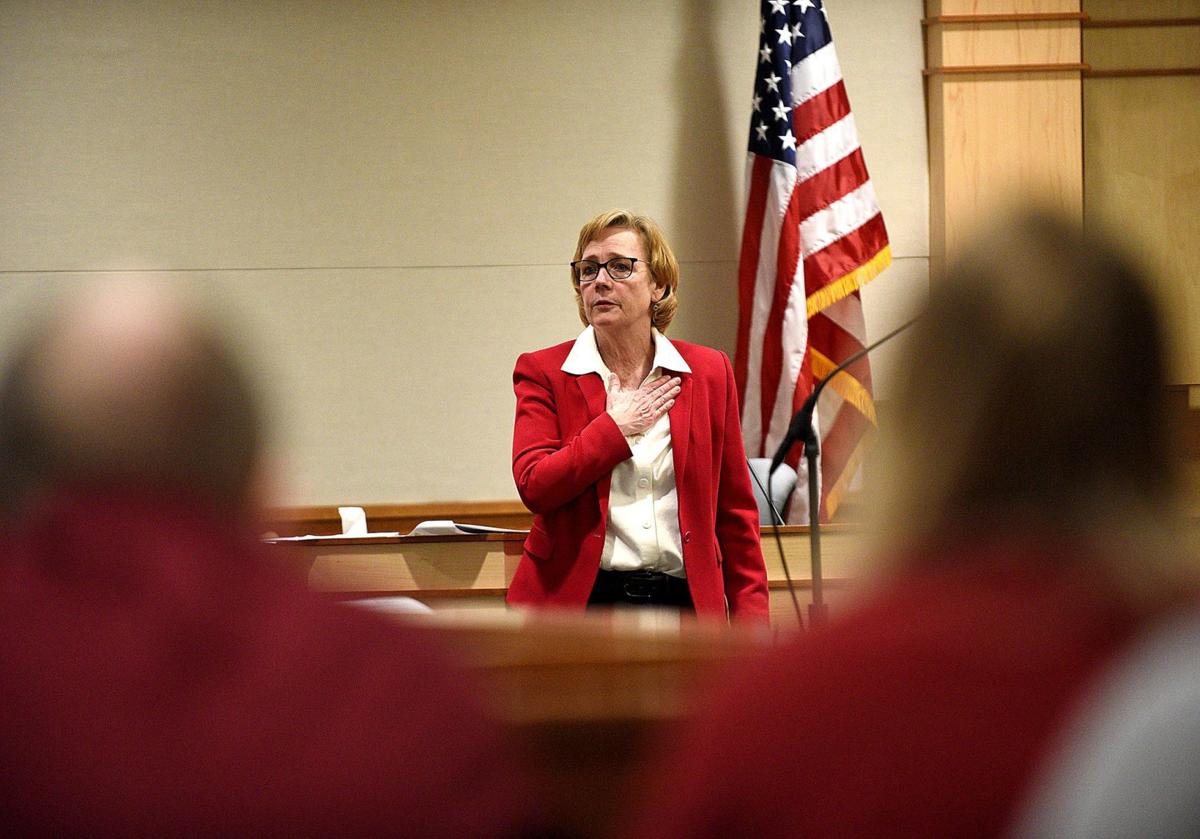 During her closing argument in the trial of Daswan Jette on Monday, public defender Caroline Smith gestures to where Sabrina Galusha was stabbed in the heartat Merrimack County Superior Court in Concord . 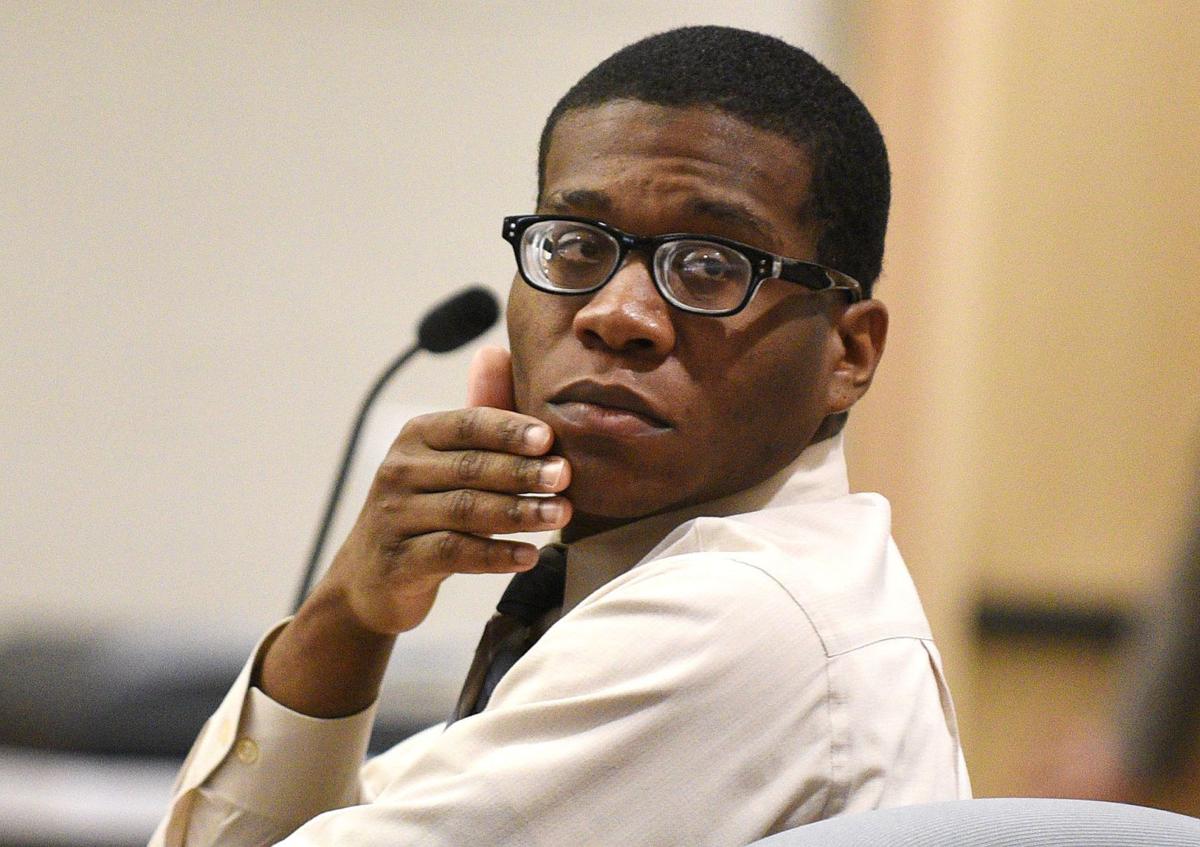 The supplier, Sam Chase, who was 19 at the time, hoped to turn a quick profit, enough to get out of a tent and into an apartment.

The buyer, Daswan Jette — a 19-year-old Boston resident making frequent trips to Concord to visit his girlfriend — wanted to establish a local supply line. He too hoped to start selling small quantities and generate a profit.

They met on the night of May 30, 2017, the first deal between the two, arranged by cellphone texts.

By 9 p.m. the quick drug deal had turned into a homicide.

Sabrina Galusha, 23, one of three women who accompanied Chase on the deal, was dead from a stab wound to the heart.

Now a Merrimack County jury will decide whether Jette should be convicted of first-degree murder or was defending himself during a confrontation with Chase and two of his friends.

The jury started deliberations on Monday, the third week of the trial.

Jette was inside the vestibule of the Penacook Place apartments, his public defender, Caroline Smith, reminded the jury. Chase had him in a headlock and the women were trying to secure his arms and hands, one of which clenched a knife. He was fighting back.

“He was not going to be helpless. He acted in self-defense, flailing around and stabbing to get away,” Smith said. “He fought, he fought for his life.”

In Jette’s version, the drug deal took place in the back seat of a car that Chase’s friend drove to the apartment complex where Jette’s girlfriend lives.

It started with an honesty test. Chase showed Jette the weed. Jette showed Chase the money. As Jette prepared to weigh the marijuana, Chase swiped the money from Jette’s lap. Jette fled in fear to the vestibule.

During the fight, Galusha was trying to secure Jette’s right hand, which clenched a tactical knife. Smith said he did not remember stabbing her.

Smith said Chase and the second woman, Madison Campbell, probably helped the fatally stabbed Galusha to the car, where she bled out and died.

Chase and the others told a different story. Jette grabbed the marijuana and ran from the car toward his apartment.

Chase, Galusha and Campbell pursued him, catching him in the vestibule. Chase threw Jette against a wall, backed off and demanded the marijuana.

“She didn’t deserve to be chased down in an act of revenge and stabbed to death,” said prosecutor Benjamin Agati.

Both versions were compromised by facts.

The steak knife, found just outside the vestibule, had no blood or DNA on it, which Agati attributed to heavy rain that night.

Chase, Campbell and the driver of the car, Anika Tidd, initially told police that they had no idea who Jette was. Once they did, their stories weren’t consistent, Smith said.

“The police knew they weren’t going to get the truth from them, but they had enough (to make a case),” Smith said.

Agati said the three feared getting in trouble for dealing drugs.

“What happened was three teenagers trying to lie their way out of a weed deal,” Agati said.

While Jette’s story turned on Galusha being stabbed in the heart in the vestibule, only small amounts of her blood were found there. Authorities attribute the blood to knife wounds to her knee and buttocks. Large amounts of blood were found in the car.

“The blood tells us part of the truth,” Agati said. “Sabrina isn’t able to testify. While he may have silenced her words, her wounds speak truth.”.

The jury got the case Monday afternoon and had not reached a verdict by the end of the day.

A Boston resident avoided a murder conviction on Wednesday when a Merrimack County jury found him guilty of manslaughter in the 2018 death of a Concord woman.

The man convicted in a 2017 Penacook stabbing death will serve between 15 and 30 years in prison.

Steyr Arms Inc. filed the suit in 2017; a judge has ordered the case closed.

The facility would be built across from the county jail, according to the plan.

WASHINGTON — A Trump nominee to serve on a court that hears claims against the government once argued that several federal agencies should be eliminated and that Social Security should be abolished because economic disparity “is a natural aspect of the human condition.”