MANCHESTER — Two police officers who testified in the GlowBar-melee trial should have disclosed that they were dating, according to a judge who ordered a new trial for a Manchester man convicted of several charges stemming from the brawl involving police and bar patrons. 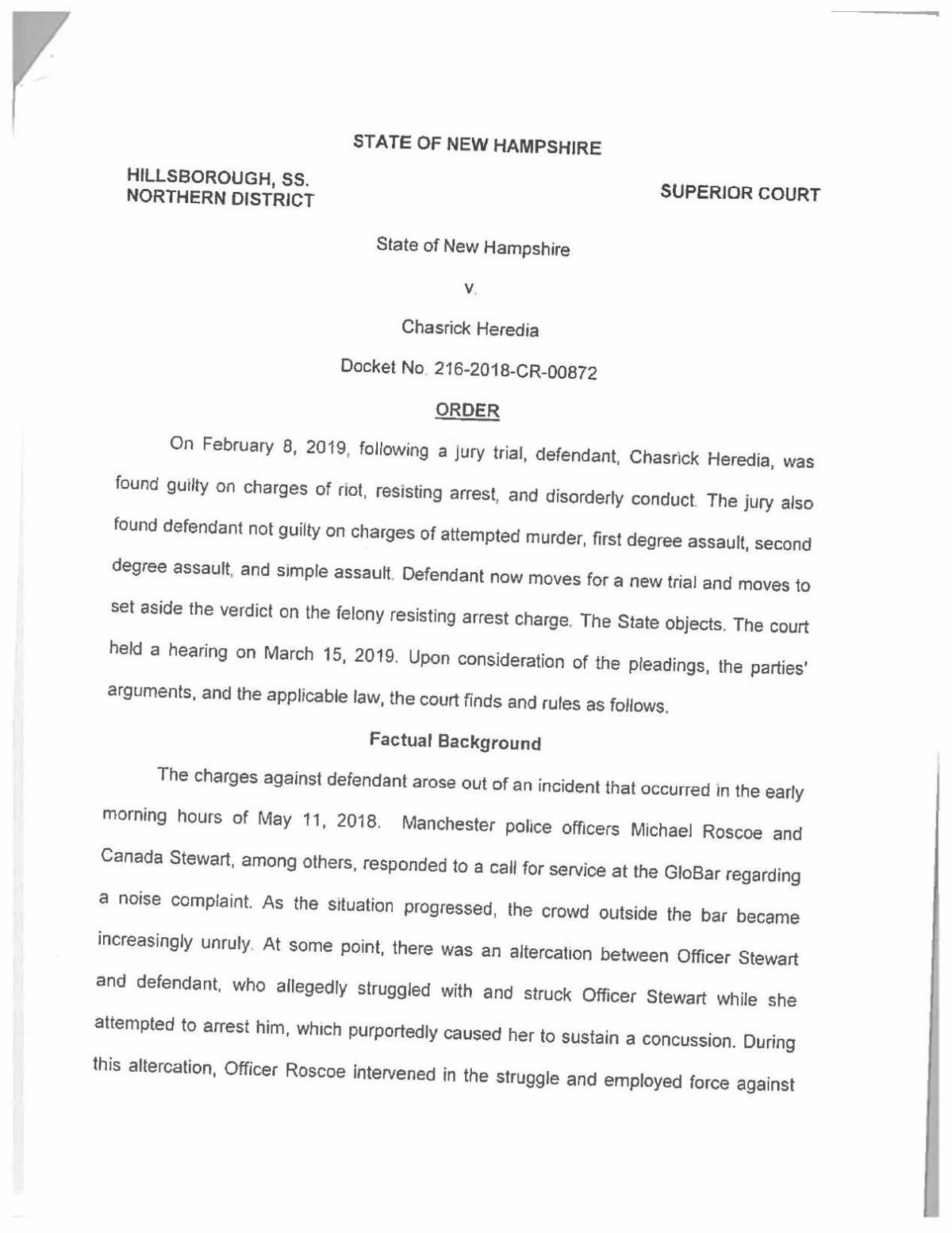 The order, issued last week by Hillsborough County Superior Court Judge Amy Messer, means that Chasrick Heredia, 24, will get a second chance to be cleared of criminal charges in connection with the May 11 GlowBar melee.

In early February, a jury found Heredia innocent of the most serious brawl-related charges — the attempted murder of officer Canada Stewart and felony assaults on her. The jury rejected allegations that Heredia repeatedly punched Stewart, an attack that could have caused her death.

The jury did convict him of felony riot, felony resisting arrest and three misdemeanors. Those charges will be subject to a new trial. Heredia’s public defender, Julian Jefferson, exercised his client’s speedy-trial rights, and Messer scheduled a trial for June 13 during a hearing on Friday.

But that is uncertain. The prosecutor in the case, Assistant Hillsborough County Attorney Donald Topham, said he has asked the New Hampshire Attorney General, who handles appeals in criminal cases, to appeal the judge’s ruling to the New Hampshire Supreme Court before trial.

“This is a novel issue that has not been addressed in any court in the country,” Topham said. He said Attorney General Gordon MacDonald would have 30 days to consider an appeal.

Assistant Attorney General Jane Young said her office will review the pleadings to determine if an appeal is appropriate.

The initial verdicts ended a trial that featured Stewart, fellow officer Michael Roscoe and other police testifying about the melee outside the now-closed bar in downtown Manchester. Topham had told the jury that Heredia “jackhammer punched” Stewart’s head on the pavement, resulting in wounds that caused a concussion and could have killed her.

The trial included a six-minute bystander video that captured much of the confrontation between police and about a half-dozen patrons as they left the bar. It did not show Heredia punching Stewart; the camera focused on another arrest when the punches could have occurred. It did show Roscoe delivering several blows to Heredia.

Jefferson’s defense theory was twofold: that Roscoe overreacted to Stewart’s cries for help and used unreasonable and illegal force against Heredia. Jefferson also theorized that Roscoe’s punches inadvertently struck Stewart, who was close at hand when Roscoe started flailing.

Under long-established procedures, police or prosecutors have to disclose any evidence that would help a defendant facing trial. In this case, Jefferson had argued that if prosecutors had disclosed the relationship, it would have bolstered his defense case.

As Messer described it: “Defendant argues the undisclosed information about the relationship between officers Roscoe and Stewart was favorable because it establishes possible bias against defendant, underscores their motivation to lie or exaggerate the truth regarding the incident underlying the charges, and bolsters defendant’s assertion that officer Roscoe ‘lost his cool’ in responding to the incident. The court agrees.”

Manchester police have no policy that forbids officers from dating, Topham said.

Prosecutors had said the relationship would have had little impact on the jury, that the Hillsborough County Attorney’s Office did not know about the relationship, and prosecutors should not be responsible for gathering evidence favorable to a defendant.

They had also cautioned against the far-reaching implication of the case. In written pleadings, Topham warned he would have to maintain a Laurie List of dating cops if Messer accepted Jefferson’s argument. Laurie List refers to a confidential list kept by prosecutors of police with credibility problems.

In her March 27 order, Messer said she understands the potential consequences, but she did not expect it would be far-reaching. She noted that Roscoe and Stewart were not only witnesses but alleged victims, and their testimony provided significant evidence in the case.

“The potentially exculpatory nature of their romantic relationship in this case should have been evident because it could clearly impact their perceived credibility to a jury and is therefore favorable to the preparation and presentation of the defendant’s case,” she wrote.

Heredia has been jailed since the May 10 brawl, and Messer reduced his bail from $75,000 cash only to $5,000 cash or surety. If he is released, he has to abstain from drugs and alcohol and live with his mother in Manchester.

MANCHESTER — A sequel to a February trial that involved dating police officers opened Tuesday for Joshua Heredia, the brother of the man who e…

Jury trials in New Hampshire slated to resume next month

New Hampshire court officials are poised to resume jury trials in the near future with a pilot trial to take place in August in Cheshire County, officials announced this week.

The estate of a New Ipswich couple killed in a head-on crash on Route 101 last year is suing a Hampton bar and two employees, alleging a repeat drunken driver who hit them was served multiple free drinks there and then told to leave.

MONTGOMERY, Alabama - Judge Les Hayes once sentenced a single mother to 496 days behind bars for failing to pay traffic tickets. The sentence was so stiff it exceeded the jail time Alabama allows for negligent homicide.