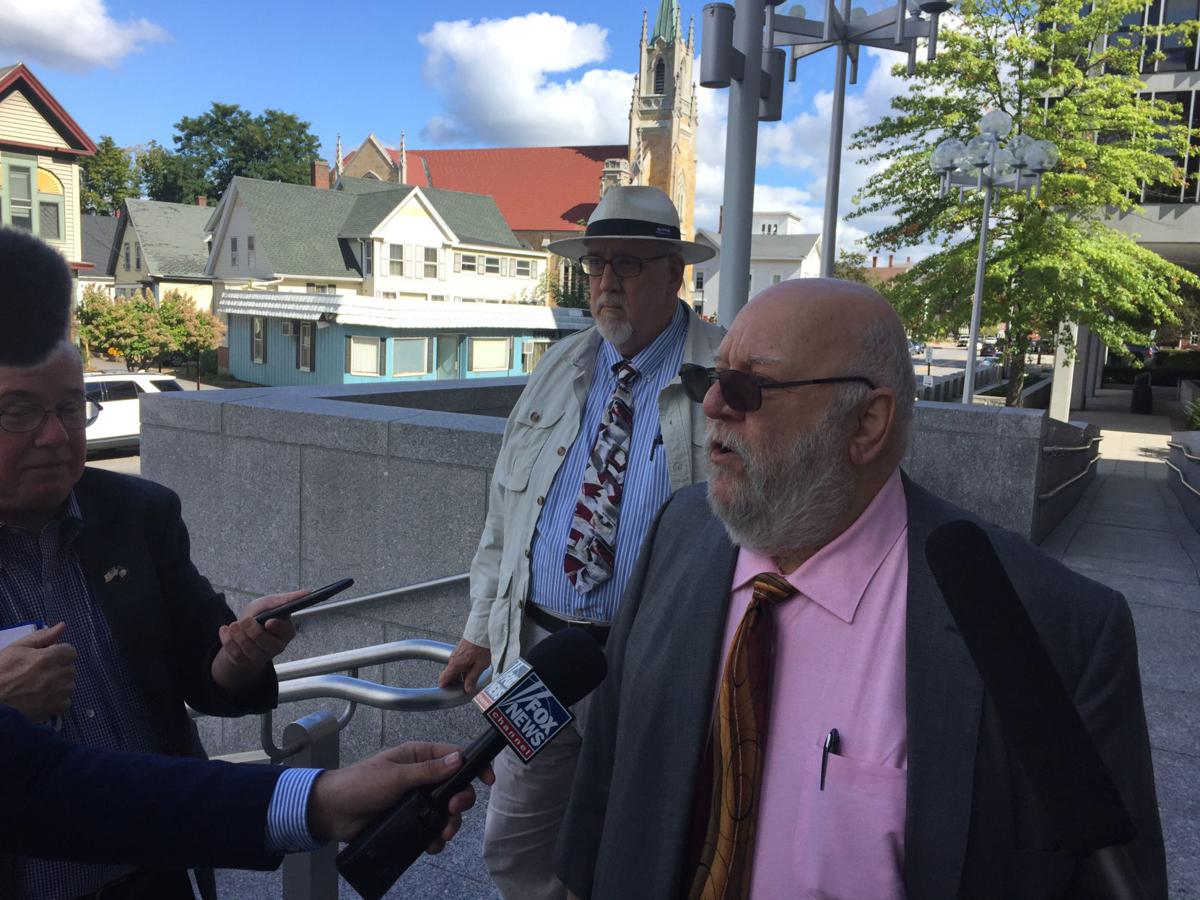 Civil rights lawyer Larry Vogelman (foreground) with client James Chamberlain outside U.S. District Court in Concord on Wednesday. Chamberlain is suing the Veterans Administration to remove the Bible from a Missing Man Table display at the VA Medical Center in Manchester. 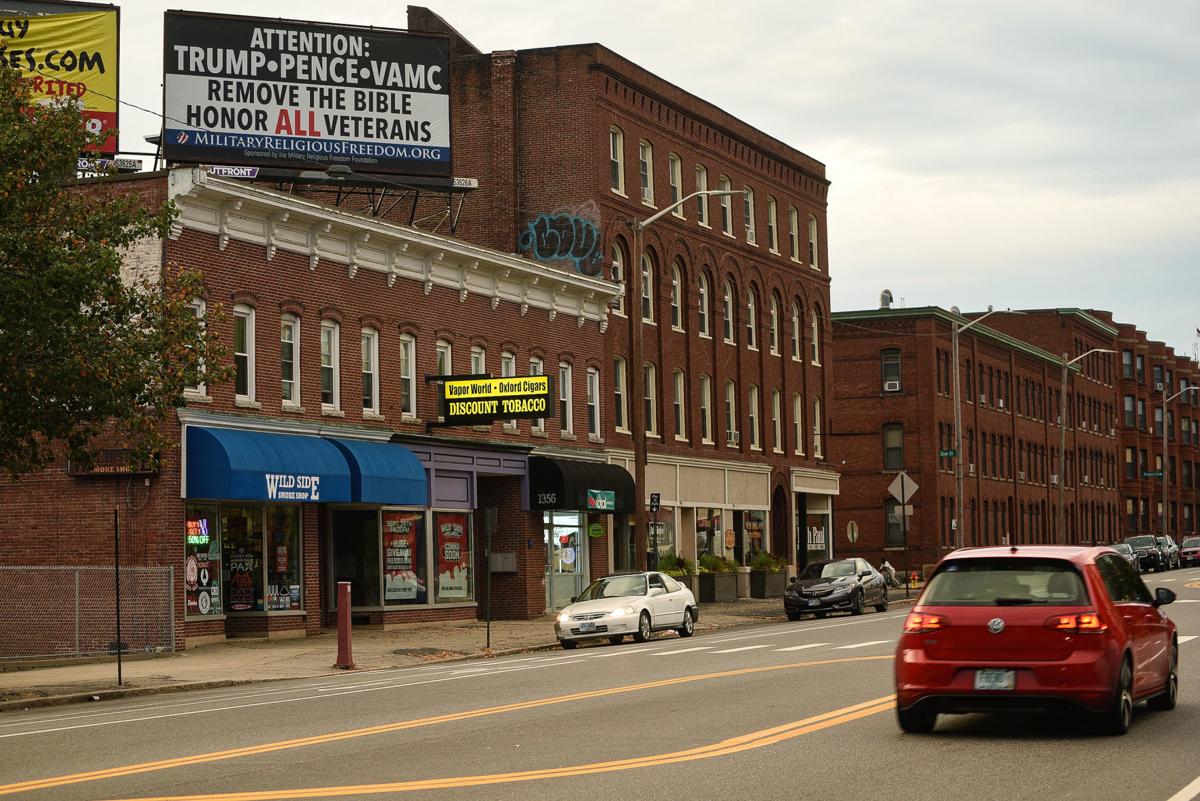 CONCORD — Does a Christian have the legal standing to sue for removal of a Bible displayed in a public place?

A federal judge Wednesday admitted he doesn’t know the answer to that question, at least not yet.

Judge Paul Barbadoro is weighing whether to compel removal of a Bible from a display called the “Missing Man table” at the Manchester VA Medical Center. The table honors servicemen who are prisoners of war or missing in action.

Wednesday’s hearing in U.S. District Court was the first courtroom airing of legal challenges brought by the Military Religious Freedom Foundation over the display in the medical center lobby.

Barbadoro acknowledged no shortage of case law and legal precedent regarding religious symbols on public property. Muslims and Jews can and have sued over crosses and Christmas creches in town squares. Atheists have challenged the display of the Ten Commandments at a courthouse.

But Barrington resident James Chamberlain, the plaintiff in the challenge, is a Christian who attends a Congregational church, and therein lies the rub, according to the judge.

Barbadoro said he knows of no prior case stemming from a Christian challenging a symbol of Christianity.

“If he were an atheist, he would have standing and that would be clear,” the judge said.

Barbadoro made no decision from the bench Wednesday, he merely noted the difficulty of the case given its complexity and lack of guidance from case law.

The judge told Manchester lawyer Lawrence Vogelman that he will have to demonstrate how Chamberlain has been injured in some way by the presence of the Bible. Barbadoro said that injury must go beyond the simple notion that Chamberlain worries non-Christian veterans might take offense or that it is a constitutional violation.

Vogelman said Chamberlain does have strong religious and philosophical beliefs about the Bible’s inclusion in the display and is offended by it as both a Christian and a veteran.

“Based upon Jim’s beliefs and his service to our country and his Christianity, he thinks excluding people is just wrong,” the attorney told reporters after the hearing.

If Barbadoro rules that Chamberlain lacks standing, the suit goes nowhere. But Vogelman and the MRFF have a fallback, which they may even pursue before the decision.

Vogelman said he may amend his original filing to add a non-Christian as a plaintiff. Military Religious Freedom Foundation claims 14 veterans have taken issue with the Manchester table, but Chamberlain was initially the one to lodge a complaint.

The attorney said some people just haven’t spoken out, and for good reason. Vogelman said the head of the foundation, Mikey Weinstein, is currently under around-the-clock FBI protection because of death threats.

The attorney said he’ll know by the end of the week whether he can add another plaintiff.

“If I forced the judge to write a decision, he may not be happy spending the next three months doing it,” he said.

On Wednesday, Judge Barbardoro did reject a challenge that Chamberlain has failed to state a claim. The judge also granted the Northeast POW/MIA Network, which erected the table, intervenor status.

The suit was filed against the VA, which was represented by the civil division of the U.S. Justice Department. That lawyer would not comment, but outside the courtroom people on both sides spoke at length.

“This display belongs to our clients, the Northwest POW/MIA Network’s display. It’s not the VA’s display, it’s not the government’s display,” he said. Any other organization could put up a display with a different symbol, Berry said outside the court.

“What they shouldn’t be doing is using the court system as a bullying tool to force the VA to injure our client’s free-speech rights, and our client’s free exercise of rights under the Constitution,” he said.

Vogelman said First Liberty doesn’t understand the law. “They could put it up in front of their office any time, but they’ve chosen to involve the government, and there’s all kinds of case law about what kind of restriction that entails,” he said. “Broadly, it’s an important issue because there has been a systematic attempt in the last number of years to Christianize the military and the VA.”

Barbardoro noted that few facts in the case are in dispute and said the case could go to trial within six months. He also expects that the case could eventually end up in the U.S. Court of Appeals and perhaps the U.S. Supreme Court.

Everyone from atheist groups to Vice President Mike Pence have weighed in on the issue.

The exhibit in question features a Bible donated by Bedford centenarian Herman “Herk” Streitburger, who was a German POW during World War II.

In August, Pence told the American Legion national convention that the Bible will stay on the table.

“Let me be clear: Under this administration, VA hospitals will not be religion-free zones,” Pence said.

According to the suit, the Manchester VA actually removed the Bible after the MRFF complained about it, but the Bible was back by February and has remained part of the display.

MANCHESTER — When his longtime girlfriend left him for one of her co-workers, Salem resident Kenyoun Gifford hatched a convoluted scheme to break into his rival’s Manchester apartment and plant child sex abuse images.

Supreme Court divided over whether to allow discrimination against religious schools

WASHINGTON - U.S. Supreme Court justices on Wednesday appeared divided over a Montana tax credit program that could benefit private religious schools in a case that could open the door to more public funding for religious institutions.