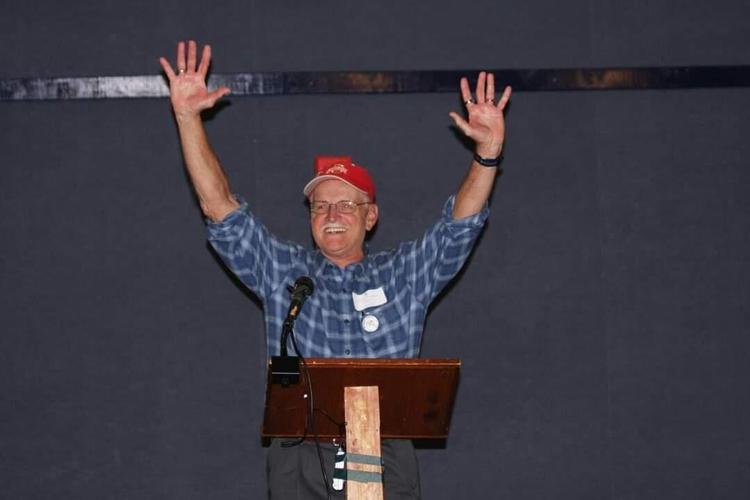 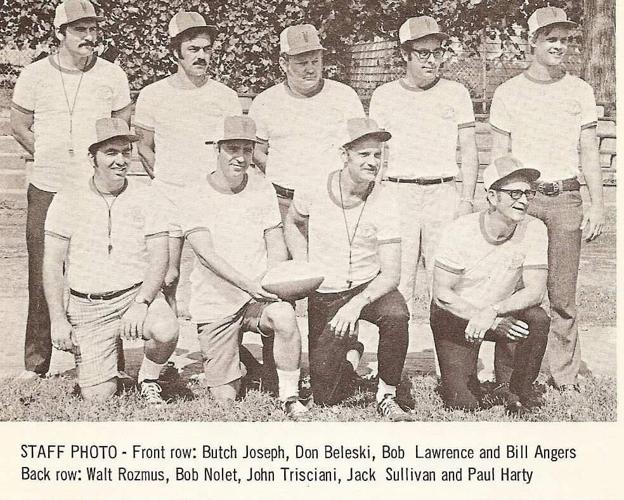 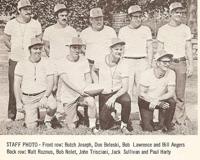 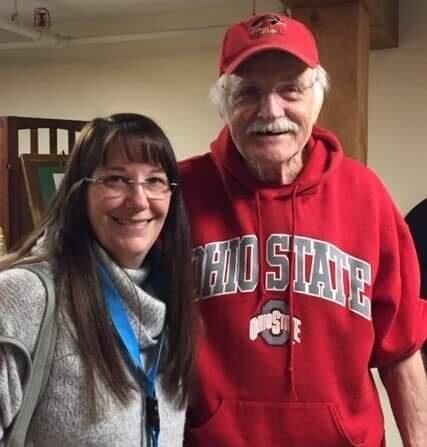 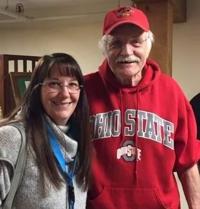 This undated photograph shows Robert Lawrence with his stepdaughter, Claudette Levesque, who was his main caretaker in his later years. She says the allegations against Lawrence don’t jibe with “the loving person that we knew.”

A Manchester sports standout who coached a city Pop Warner football team to a national championship in 1973 has been accused of abusing children at the Youth Development Center in Manchester while employed there in the 1970s.

Robert Lawrence, who coached the Manchester Vikings for 15 years, was named this past fall in two of the hundreds of lawsuits brought against the state. The civil lawsuits and criminal indictments portray decades of sexual abuse at the YDC, the state’s youth detention facility.

“I’d be shocked if he didn’t have many more (victims),” said David Vicinanzo, the Manchester lawyer who filed suit on behalf of the two alleged victims. “We know these things act out serially once the taboo is broken.”

As a coach of a winning football program, Lawrence had contact with hundreds of baby boomers from the greater Manchester area when they were in their early teens.

Lawrence also rubbed shoulders with the Manchester coaching icons of the era: Lou D’Allesandro, who would go on to become a state senator, George “Butch” Joseph and John “Trish” Trisciani.

“I find it hard to believe for a guy who was so dedicated to football and the kids,” said Bedford resident Walt Rozmus, who co-coached the championship Viking team with Lawrence and later coached high school football.

Rozmus said many people were involved with the Vikings — kids, assistant coaches and a board of directors — and it would be hard to keep any child abuse secret.

“There was never a whisper,” he said.

“If I had to comment, it would be no. That’s not the loving person that we knew,” said Claudette Levesque, Lawrence’s stepdaughter, who lives in Webster.

Lawrence did not go to college, and he played football for a single season at Central High School. But he made his mark in Manchester in youth sports.

Throughout his career, he was a coach or assistant coach for Pony League baseball, Boys Club basketball, Memorial High School football and Manchester Flyers floor hockey, according to his obituary.

Rozmus said the Vikings lost only 18 games in their 19-year history. Lawrence left after 15 years. For eight years in a row, the Vikings ranked in the top five nationally among Pop Warner teams in their division, which covered early high school years, Rozmus said.

The Manchester Jaycees honored Lawrence with an “outstanding man” award in 1974 and 1975.

“He was an excellent coach: stern, very, very knowledgeable. He could care less about offense,” Rozmus said. The two were co-coaches. Lawrence coached the defense, Rozmus the offense.

“I didn’t know him that well. It’s a terrible, terrible thing,” said D’Allesandro, who coached football at Bishop Bradley High School in the mid-’60s and went on to coach basketball at New Hampshire College.

D’Allesandro was a board member of the Manchester Vikings. He said the board’s job was to raise money for the program, and most of his contact with Lawrence would take place when the future senator would visit a Vikings practice.

The Lawrence revelation is the latest in the ongoing tumult over the YDC, which is now called the Sununu Youth Services Center.

Authorities have said children were abused at the facility from the 1960s to the late 2010s. The Attorney General’s Office has brought criminal charges against 11 former YDC staff members. The first trial is scheduled for this summer.

To date, 735 claims have been filed in civil court, seeking judgments against the state. Last year, the state established a $100 million victim compensation fund, which leaders billed as an alternative to lengthy litigation.

Vicinanzo’s research showed that Lawrence worked at YDC from at least 1972 to 1980. In 1980, a Union Leader list of state workers and their salaries identified him as an assistant house leader at the YDC. While nearly all of the YDC cases involve children placed there by the juvenile court system, the Lawrence case raises a different scenario.

That accuser, identified in documents as John Doe, was 10 when he met Lawrence. The boy, his brother and sister were in an orphanage, placed there by a mother who was struggling to provide for them after her husband never returned from Vietnam, according to the lawsuit.

Lawrence was dating the boys’ mom in 1972 and took the boy, then 10, out of the orphanage for visits. Lawrence spoke about eventually having the boy and his siblings live with him, and he eventually brought the boy to YDC, according to the suit.

The molestation started at the YDC pool, the suit says, and over time the assaults became bolder and more violent. Lawrence returned the boy to the orphanage, always talking about a permanent home outside of the orphanage, according to the filing.

In 1973, Lawrence moved in with the mother and her children. But Lawrence continued to take the boy to YDC and told him that his siblings would be sent back to the orphanage if he complained, the suit says.

YDC employees also sexually assaulted the boy, according to the filing.

At times, John Doe got into fights with YDC residents. Lawrence once punched the boy in the face and berated him for losing a fight, the lawsuit reads.

Eventually, the mother became suspicious and left Lawrence, the suit reads. Doe grew up to be a U.S. Marine who served in the Middle East and fathered two daughters, the lawsuit reads.

Lawrence stopped coaching the Vikings in 1978.

Lawrence attended a few games afterward but basically dropped out of sight, Rozmus said. Then he worked for Rozmus as an assistant football coach at Memorial High School in 1988 and 1989, Rozmus said.

Lawrence’s obituary listed jobs with defense contractor Allen-Bradley and with the Sheraton Wayfarer hotel. It does not mention his employment at YDC.

“Making money didn’t interest him. Football interested him,” he said.

Lawrence married twice. He married his first wife when he was coaching the Vikings, Rozmus said.

He married his second wife, Georgette (Vallee), after leaving the team.

Levesque, his stepdaughter, said she was 11 when he and her mother, Georgette, married. Her stepfather didn’t display the behavior of a child abuser, she said. He took the family on camping vacations. He basically stayed home and didn’t leave the house for unexplained reasons, she said.

He never befriended boys or had them over to the house.

“I was a teenage girl at the time. I wish there were,” Levesque said.

Levesque said the allegations took place before she knew Lawrence, but she is suspicious of them. She cared for him as he faltered and developed Alzheimer’s disease, and he never mentioned any such behavior.

“I don’t want to call someone a liar,” Levesque said. “Something obviously tragic happened, but that’s not the person we knew.”

She noted that the allegations are surfacing now when Lawrence is dead and can’t defend himself.

Vicinanzo said Lawrence’s death doesn’t diminish the victims’ experience. He compared the Lawrence disclosure to last year’s revelation about former Union Leader publisher William Loeb, whose stepdaughter accused him of abuse 21 years after his death in 1981.

“I’ve seen this tough guy (Lawrence’s accuser) in tears, and I don’t have any doubt about what happened,” Vicinanzo said.

Lawrence is dead, so no criminal charges can be filed against him, Attorney General spokesman Michael Garrity said. But his death would not preclude the prosecution of any accomplices, he said.

Prosecutors are preparing for trial on the 11 people already charged, and trial dates have been set for six of the cases, the latest for summer 2024.

Investigations are continuing into “other matters,” but Garrity would not entertain questions about whether that includes alleged abuse by Lawrence.

No lawsuits have been settled yet, and it likely will take several years for any civil cases to be resolved.

“This will be a very long process,” Garrity said.

Any person with information regarding criminal conduct at the YDC is urged to contact the New Hampshire Attorney General’s YDC Task Force hotline at 603-271-4000. The state started accepting settlement claims on Jan. 1.

Notice of controversial YDC settlement fund to be published in newspapers, online

Chuck Miles, a 55-year-old Florida man identified in a lawsuit against the state as John Doe #526, said he endured repeated sexual and physica…