A controversial adoption case that has generated accusations of racism shows that police aren’t the only government officials who need to be aware of implicit bias and systemic racism, an official with the Manchester NAACP chapter said last week.

Donna Brown, a lawyer and chair of the chapter’s legal redress committee, said the case of Sandra and Clyde Lunsford — Black grandparents whose efforts to adopt their biracial grandchildren have been rejected by New Hampshire officials — is not an isolated case.

Mageorie Richardson, a Haitian-American in Medford, Mass., who has seen her nephews placed with a White family in New Hampshire, said this state’s social workers and judges have stymied her efforts to adopt her two biracial nephews.

“People who look like me, we don’t get justice,” Richardson said.

“The recent focus has been on police, but there’s a whole lot of other people in the legal system who may need training on implicit bias, definitely judges,” Brown said.

The issue is particularly vexing when it comes to family court, because those cases are decided behind closed doors, she said. 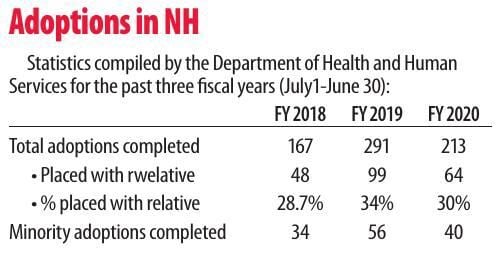 “Just because we think we know how to deal with a situation doesn’t mean we truly know,” Sununu said.

Spokesmen for both the Division for Children, Youth and Families and court systems say they already provide a host of training on those topics.

The DCYF provides ongoing training to its workers, foster parents and community partners. All receive training content in areas related to cultural diversity.

Implicit bias training was added to the core components of field staff training this year, which includes an Implicit Association Test through a Harvard University online program. Adoption-related training includes a section on biracial adoptions that is available to all DCYF staff.

Likewise, all judicial branch employees receive mandatory training from outside experts on bias-related issues, according to an email from Superior Court Chief Justice Tina Nadeau.

Examples she provided focused on drug court and criminal court rather than family court, but she said all courts take the training.

Richardson’s story parallels the Lunsfords’ in some key respects.

In August 2017, the state took custody of Richardson’s two nephews after her brother, Carl Dejoie, was imprisoned for cocaine sales.

Initially, Richardson told DCYF in New Hampshire she could not take guardianship of her nephews. She was having a complicated pregnancy and her doctor did not want to increase her stress, she said.

Three months later, she had her baby and reached out to DCYF to take the boys. They dodged her calls, she said, and she spoke to them only when her brother’s lawyer became involved, she said.

She said DCYF misrepresented her intentions when the case went before a judge.

Massachusetts social workers readily cleared her as a foster parent, which she said abruptly contrasted with her treatment in New Hampshire.

Richardson said she works part-time in the customer service department of a bank. Her husband enforces sanitation ordinances for the city of Cambridge.

In an email, DCYF spokesman Jake Leon said: “We are committed to protecting the confidentiality of all involved, including and especially the innocents.” He referred a reporter to a previous statement from DCYF Director Joe Ribsam.

Ribsam said family preservation is the best way to maintain racial identities. If that can’t be done, DCYF tries to place children with relatives. The final resort is foster or adopted parents who can support the identities and traditions of the children.

“Maintaining the racial, ethnic, cultural, and religious identities and traditions of children who come into DCYF care is a key priority,” he wrote in an email.

At DCYF’s request, Richardson went through the foster licensing system in Massachusetts, she said. But she said DCYF started finding fault wherever it could:

• Her brother and his adult son were accused of sexual assault, but charges were never brought, which Somersworth police confirmed.

• The DCYF doubted her commitment, according to court papers.

• Social workers critiqued her interaction with her nephews during the three visits she was allowed before being cut off.

Meanwhile, the boys, who are now 11 and 5, grew attached to the Dover family they went to, according to a judge’s ruling in the case.

Richardson is not sure whether the adoption is final — DCYF won’t tell her anything — but she said a judge terminated her brother’s parental rights.

Richardson does have custody of Dejoie’s daughter, and it pains her that she will never know her brothers. Nor will the brothers know their Haitian heritage.

“The judge didn’t even hear me,” she said. “To me, it’s almost like legalized child trafficking. That’s the business they’re in.”

Juan Cofield, president of the New England Area Conference of the NAACP, was surprised to hear criticism of social workers. The Massachusetts resident said most social workers he runs into are attuned to issues of bias and discrimination.

Cofield, who has held the position for 17 years, said the Lunsford case represents the first complaint he has heard about transracial adoption.

Such cases remain hidden, becoming public only when they land in appeals courts, he said.

In 1992, the NAACP adopted a policy statement that Black children should be placed with suitable Black families. But the NAACP prefers transracial adoption over foster care.

Cofield said it’s important for minority children to grow up with parents and role models who reflect their culture.

A Black child will face discrimination at some point in their life, and Black parents are best able to address that, he said.

“I don’t want to suggest that a White family could not love a Black kid,” Cofield said. “It’s just a matter of acculturation.”

WASHINGTON - When a 418-page transcript of a deposition given by Ghislaine Maxwell is made public, perhaps by week's end, it will mark a major milestone in a legal fight by the Miami Herald to reveal Jeffrey Epstein's protected world by shining light in uncomfortable places.

WASHINGTON - A federal appeals court dealt Ghislaine Maxwell, the alleged madam to disgraced financier Jeffrey Epstein, twin blows late Monday by declining to consolidate her appeals in numerous overlapping cases and striking down her effort to thwart release of a controversial deposition sh…