Deputy Attorney General Jane E. Young announced the complaint was filed Tuesday in Merrimack County Superior Court. The complaint alleges the Sackler family directed the company to keep promoting opioid painkillers, even in the face of evidence the drugs were harmful. 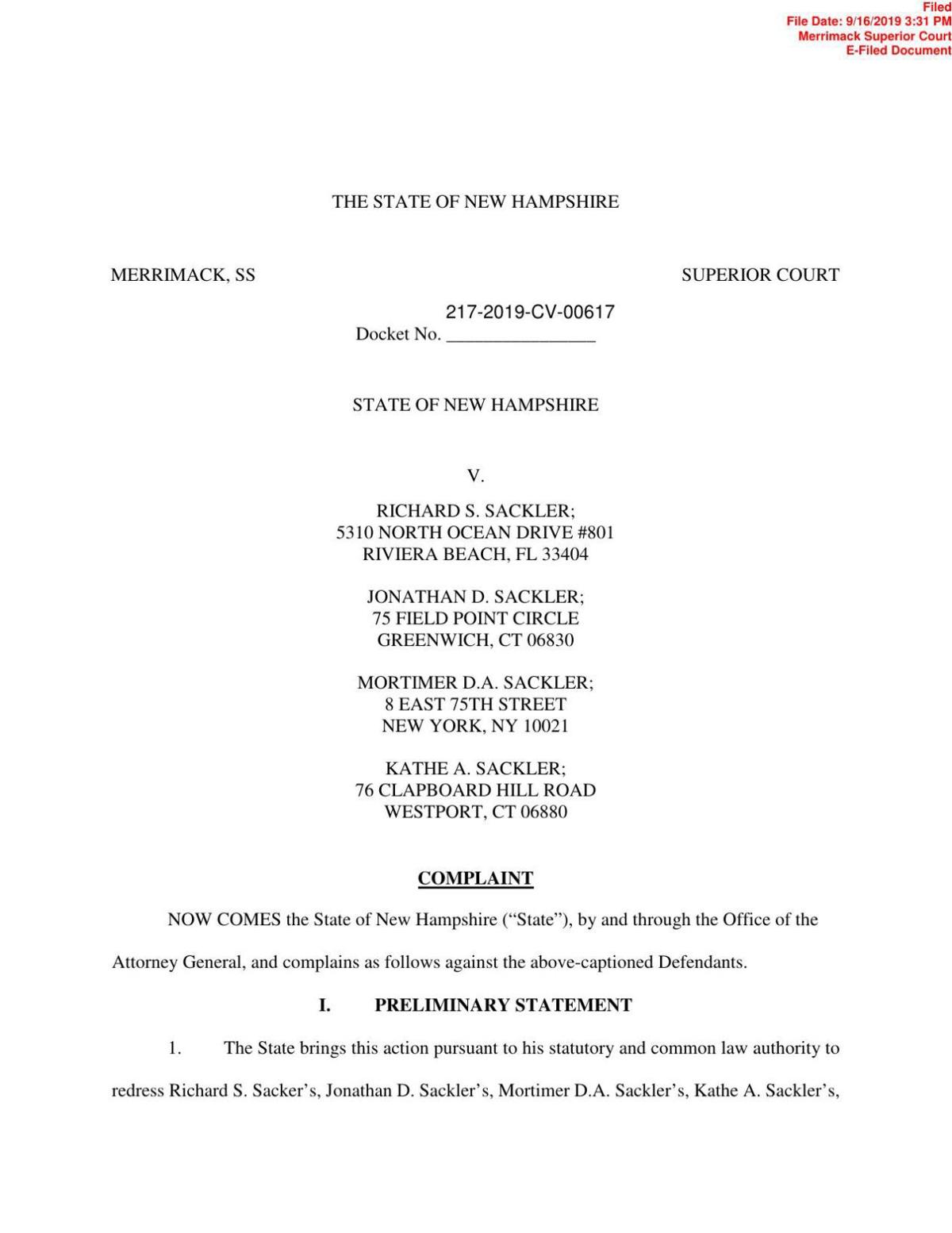 According to the complaint, a senior DEA official once sat across a table from Richard Sackler, leaned over the table and told him: “People are dying. Do you understand that?”

“Yet, at the direction of the Sacklers, Purdue kept pushing opioids and people kept dying,” the complaint states.

The complaint alleges four members of the Sackler family tightly controlled the company, and directed sales representatives to promote opioids to New Hampshire prescribers with full knowledge that these drugs posed significant risks to patients. The complaint alleges the Sackler family transferred the company’s profits into personal bank accounts.

When states including New Hampshire sued Purdue Pharma, the complaint states, the company’s money was out of reach.

“Hundreds of millions of dollars in Purdue assets beyond the reach of creditors, including the State,” explained a news release from the New Hampshire Attorney General’s office. “Purdue’s assets are no longer available to satisfy Purdue’s creditors, and the company filed bankruptcy on September 15, 2019.”

The attorney general wants the Sackler family to pay the state civil penalties, and give up the money they “wrongfully and unjustly acquired.”

AG's office: Opioid makers have 'blood on their hands'

'Tactic 8' in secret plan to thwart DEA: Find a champion in Congress

Newly unsealed documents in a landmark civil case in Cleveland provide clues to one of the most enduring mysteries of the opioid epidemic: How…

WASHINGTON — Sen. Maggie Hassan is renewing her call for the release of a 2006 Department of Justice memo that laid out a case against OxyCont…

When three New Hampshire ski resorts were sold to a Colorado company on Tuesday, the Sackler family — of opioid maker Purdue Pharma Inc.— like…

OSSIPEE – An assisted living facility being sued for negligence for allegedly allowing a dementia patient to walk away and never be found says the man’s family refused a doctor’s recommendation that he be placed in a locked unit.