CONCORD — The state’s highest court wrote that a defendant’s race can be considered in deciding if someone stopped by police truly feels free to go, or if a police stop has crossed the line into unlawful detention.

That conclusion was part of a Friday decision that overturned a drug conviction stemming from a 2017 police stop in Concord.

In April 2017, two city police officers went to a south Concord home to check out a report of a suspicious vehicle parked outside a small apartment building.

The passenger told one of the officers she lived in the building. The other officer approached the driver, a man named Ernest Jones. Several minutes after encountering Jones, the police found out there was a warrant for his arrest. The officers searched Jones, and said they found fentanyl.

Jones’ attorneys, Donna Brown and Michael Eaton of Wadleigh, Starr and Peters PLLC, moved to suppress the evidence. The attorneys said Jones had been detained without reasonable suspicion—in violation of the Fourth and 14th Amendments of the Constitution. They also asked that the trial court consider the fact that Jones is black in analyzing the encounter.

Though the trial court did not suppress the evidence and found Jones guilty, the Supreme Court decided it should have been suppressed, and reversed the lower court’s guilty verdict. 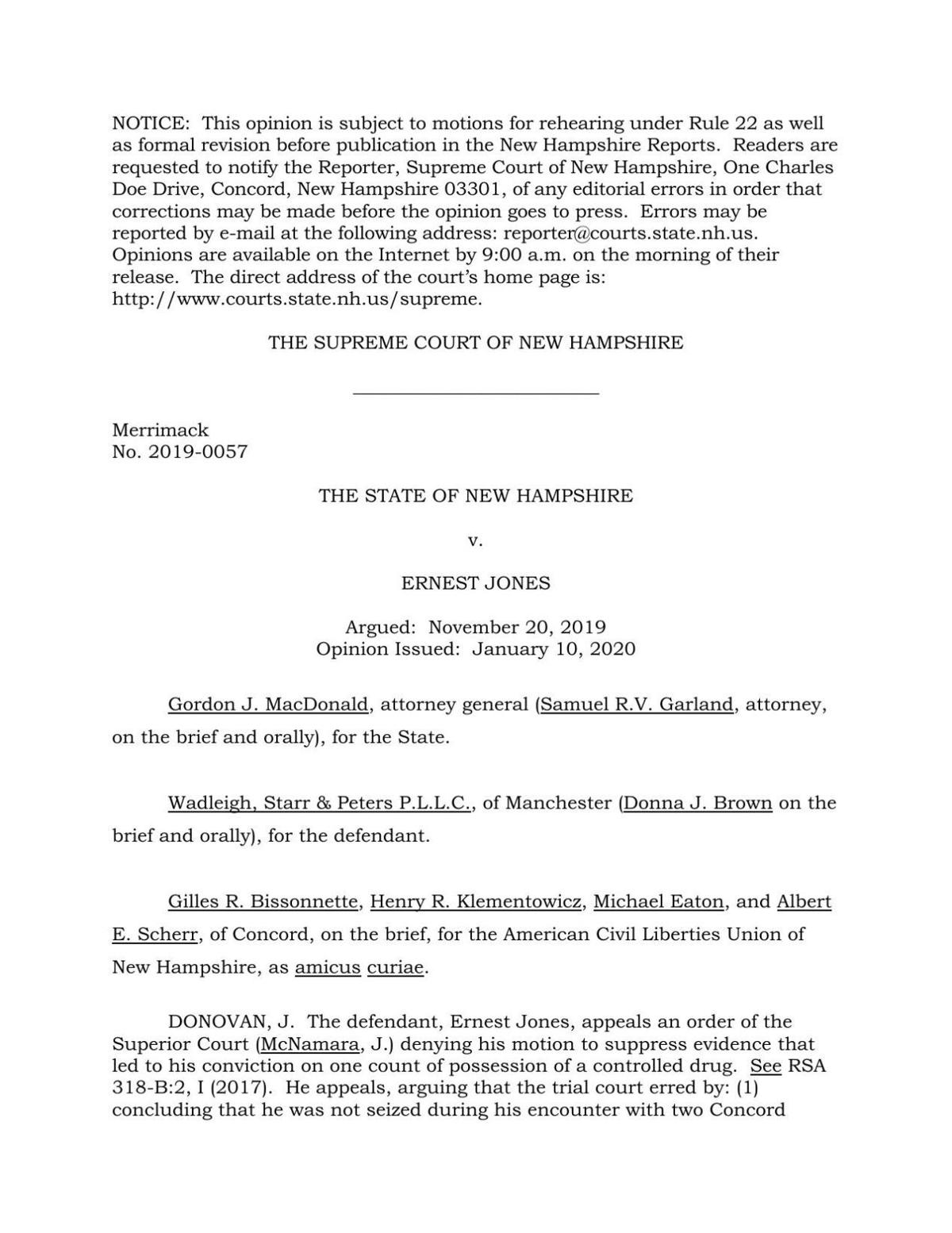 “Although we reach our conclusion irrespective of the defendant’s race, we observe that race is an appropriate circumstance to consider,” the Supreme Court decision reads.

The decision also points out that the officer who spoke with Jones in the driveway, who may have effectively detained him, did not testify at Jones’ trial. Without his testimony, the Supreme Court decision stated, the lower court could not have had enough evidence to conclude that Jones was not subject to an unlawful seizure.

“A seizure occurs during an encounter with the police when, in view of all the circumstances surrounding the encounter, a reasonable person in the defendant’s position would believe that he or she is not free to leave the encounter,” the decision explains. Police can seize someone by physical force or by a “show of authority,” like an officer telling a civilian that they are required to comply.

Citing several earlier cases in New Hampshire and other states, the court wrote that people rarely feel truly free to end an encounter with police, even if they are legally free to go.

The officer who did testify at Jones’ trial said Jones and his passenger would have been free to leave after they learned the woman lived in the building near where the car was parked. In the time between learning why Jones and his passenger were in the driveway, and learning there was a warrant for Jones’ arrest, the two officers would not have had reasonable suspicion that he had committed any crime.

The test to determine whether someone has been “seized” is if a hypothetical “reasonable person” would feel free to leave in the same situation. Friday’s decision specifies that the defendant’s race is part of the overall situation to be considered.

The state chapter of the American Civil Liberties Union cheered the decision. Legal director Gilles Bissonnette said people of color often have a different experience with police than do white people. That difference of experience should have always been part of courts’ consideration of

Judge hears arguments on whether racketeering suit should be tried in U.S.

Two well-known New Hampshire law firms squared off in federal court Tuesday to make their cases on whether a Turkish-American entrepreneur’s racketeering lawsuit should be tried in the United States.