A San Francisco-based developer of electronic health record software will pay $145 million in fines for accepting kickbacks from drug companies, including a "major opioid producer," to access to their EHR software so they could influence a doctor's prescription decisions, the top federal prosecutor in Vermont announced this week.

U.S. Attorney for Vermont Christina E. Nolan said the kickbacks gave the unnanmed drug company "a thumb on the scale" when a doctor was making incredibly intimate and important decisions about the need for pain medication and prescription amounts. 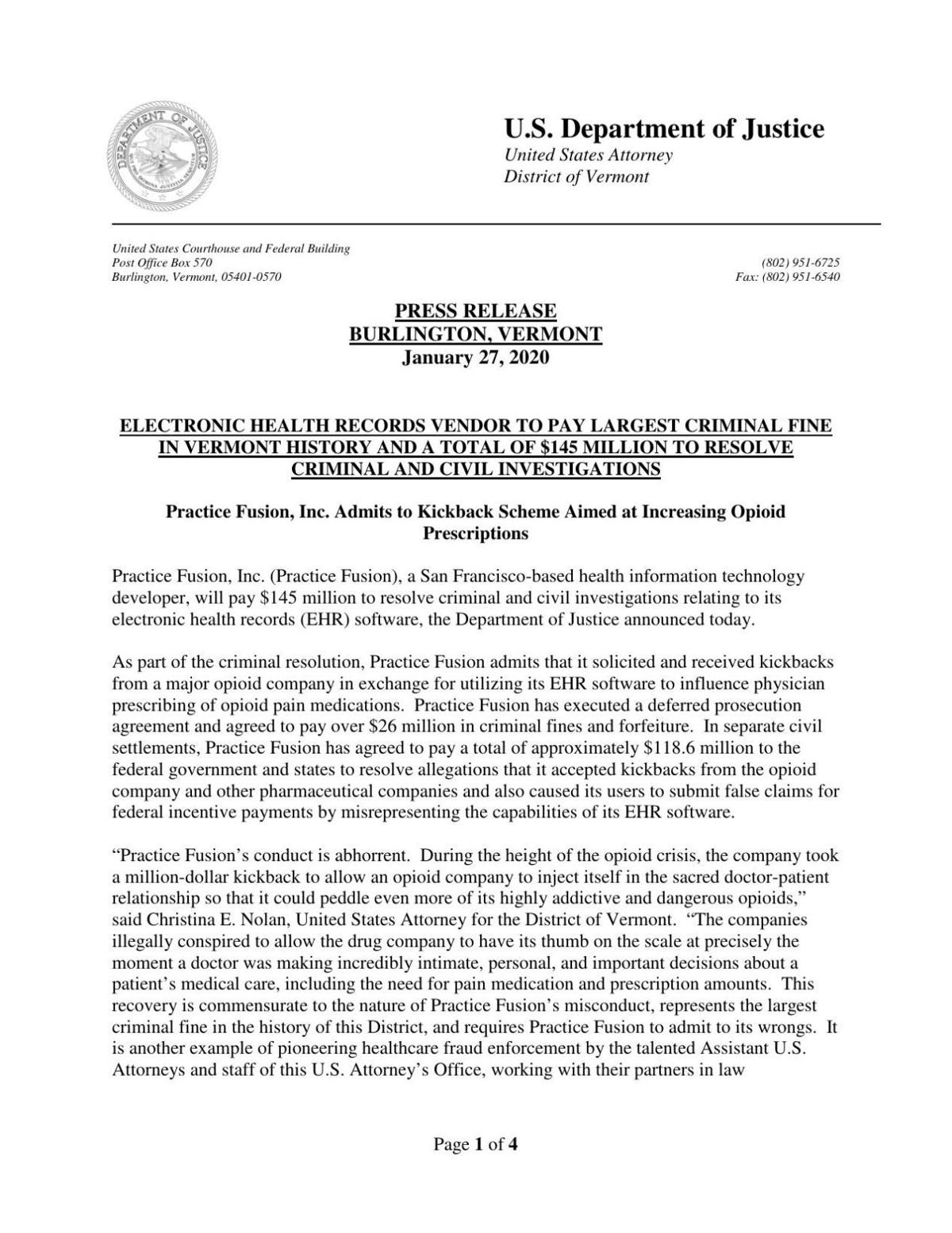 “Practice Fusion’s conduct is abhorrent," Nolan said in a statement. "During the height of the opioid crisis, the company took a million-dollar kickback to allow an opioid company to inject itself in the sacred doctor-patient relationship so that it could peddle even more of its highly addictive and dangerous opioids."

The criminal fine is the largest ever levied through the U.S. Attorney in Vermont. The civil penalty is in line with a previous penalties levied against another electronic health record company. Practice Fusion is the third EHR company to be investigation and implicated by Nolan's office.

In a statement, Practice Fusion's parent company, Allscripts, described the practice as a legacy matter that it disclosed last August and predated its acquisition of Practice Fusion.

"Allscripts recognizes the devastating impact that opioids have had on communities nationwide, and we are using our technology to fight this epidemic," Executive Vice President Brian Farley said in an email. "We remain committed to Practice Fusion and believe this matter should not overshadow the important and valuable work it is currently performing.”

A spokesman for Nolan's office, Kraig LaPorte, said no public documents identify the opioid company and his office could not say if an investigation is continuing.

"We don't identify individuals or company that are not indicted," LaPorte said.

According to a four-page press statement, Practice Fusion took unlawful kickbacks from drug companies in exchange for including Clinical Decision Support alerts in their EHR software. With its "sponsorship" payments, drug companies influenced the support alerts to increase sales of their products. The company had CDS arrangements with  the unnamed opioid company and 13 other drug companies, prosecutors said.

Practice Fusion permitted the companies to set criteria that triggered an alert and even drafted the language of the alert itself. The system was in place from 2014 to 2019.

Nolan's office deferred prosecution on two kickback charges. The deferral agreement imposes stringent requirements, including compliance overhauls, independent oversight and a release of company documents on a website. The civil fines represent claims submitted to the federal government that were tainted by the kickbacks.

CONCORD — Police personnel files did not magically become public records last week, despite a New Hampshire Supreme Court ruling that threw out a 27-year-old legal precedent that had kept them locked away from public access, lawyers in the case said.

Dartmouth College faces a lawsuit over the difference between the on-campus and online experience, after the college declined to refund any portion of tuition its students paid for the spring semester.