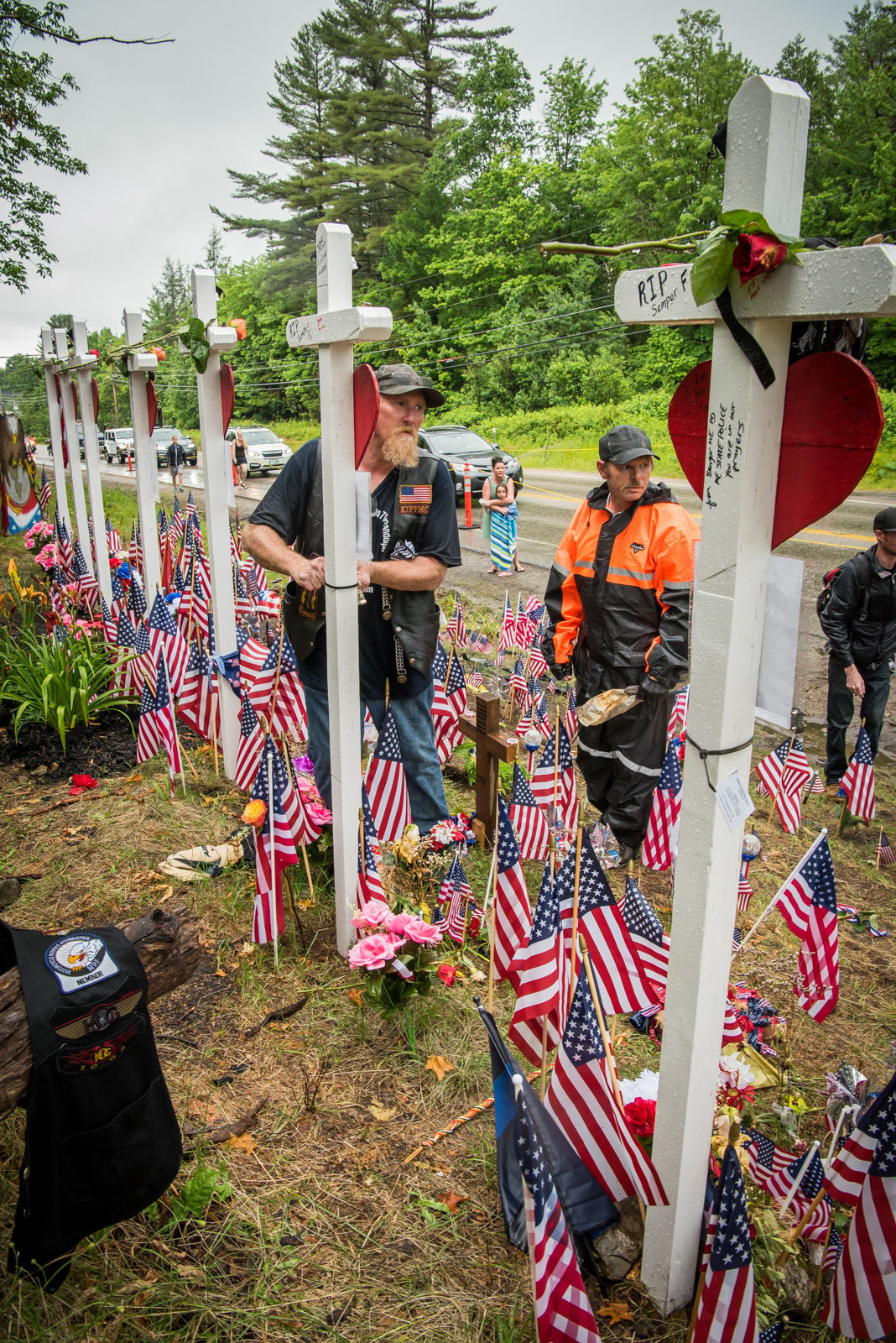 Steve Allison of Manchester, one of the organizers of the Ride for the Fallen 7 in July, ties a “gremlin bell” to crosses for each of the seven motorcycle riders killed in the Randolph crash. 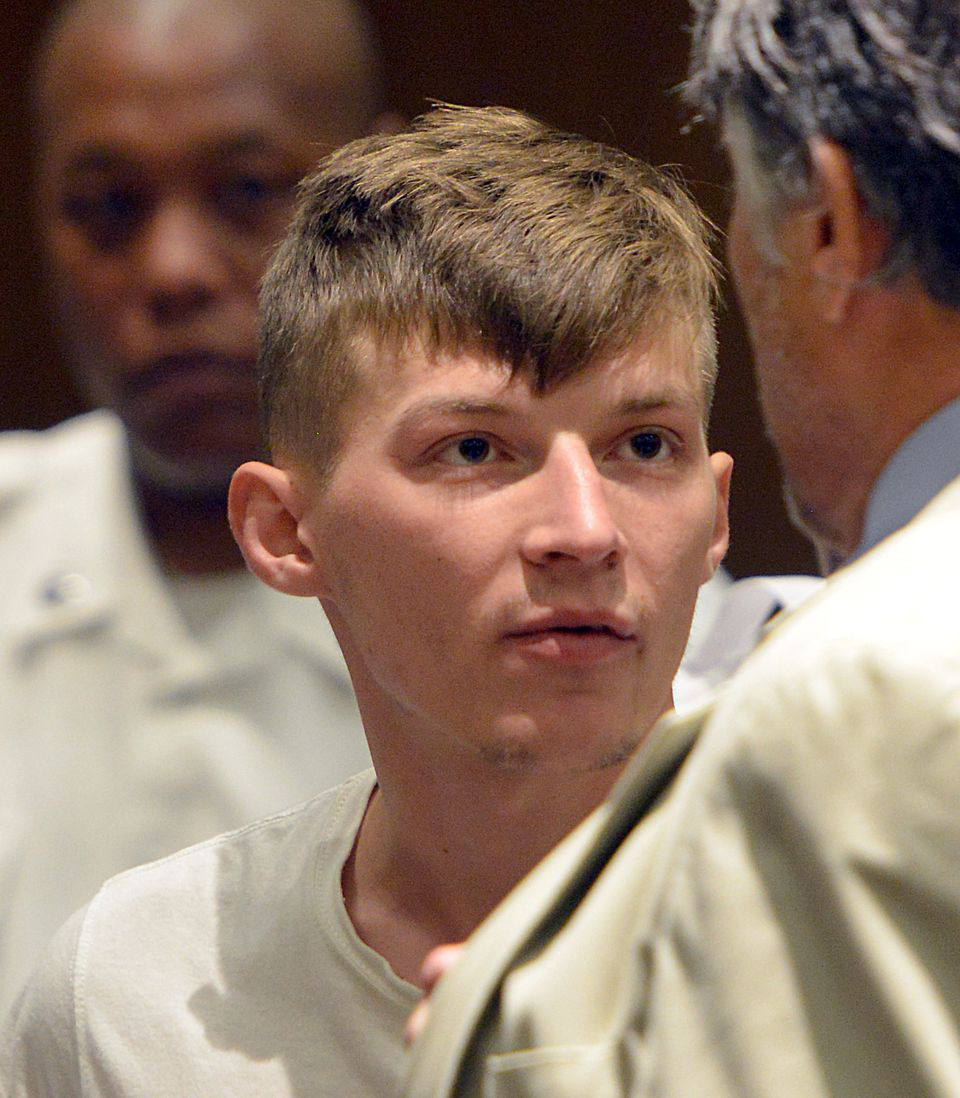 Lawyers for Massachusetts resident Volodymyr Zhukovskyy said an independent analysis has determined that Zhukovskyy’s truck was not 1½ feet over the center line, as state police initially reported.

One of the accident victims — Albert Mazza — had a high blood-alcohol level, and the impact occurred in the center of the highway, the public defenders wrote in papers seeking Zhukovskyy’s release from jail as he awaits trial. The request was filed Friday.

The report was written by Crash Labs, an independent accident reconstruction firm.

The accident in the White Mountain town of Randolph killed seven bikers and passengers affiliated with the Jarheads Motorcycle Club. Prosecutors in the case — which include the offices of the New Hampshire Attorney General and Coos County Attorney — will file a written objection with the judge, said Attorney General spokeswoman Kate Spiner.

“The (Crash Labs) report concludes that the initial impact occurred between the left side of Mr. Mazza’s motorcycle and the left front tire of Mr. Zhukovskyy’s truck,” wrote public defenders Jay Duguay and Steve Mirkin. 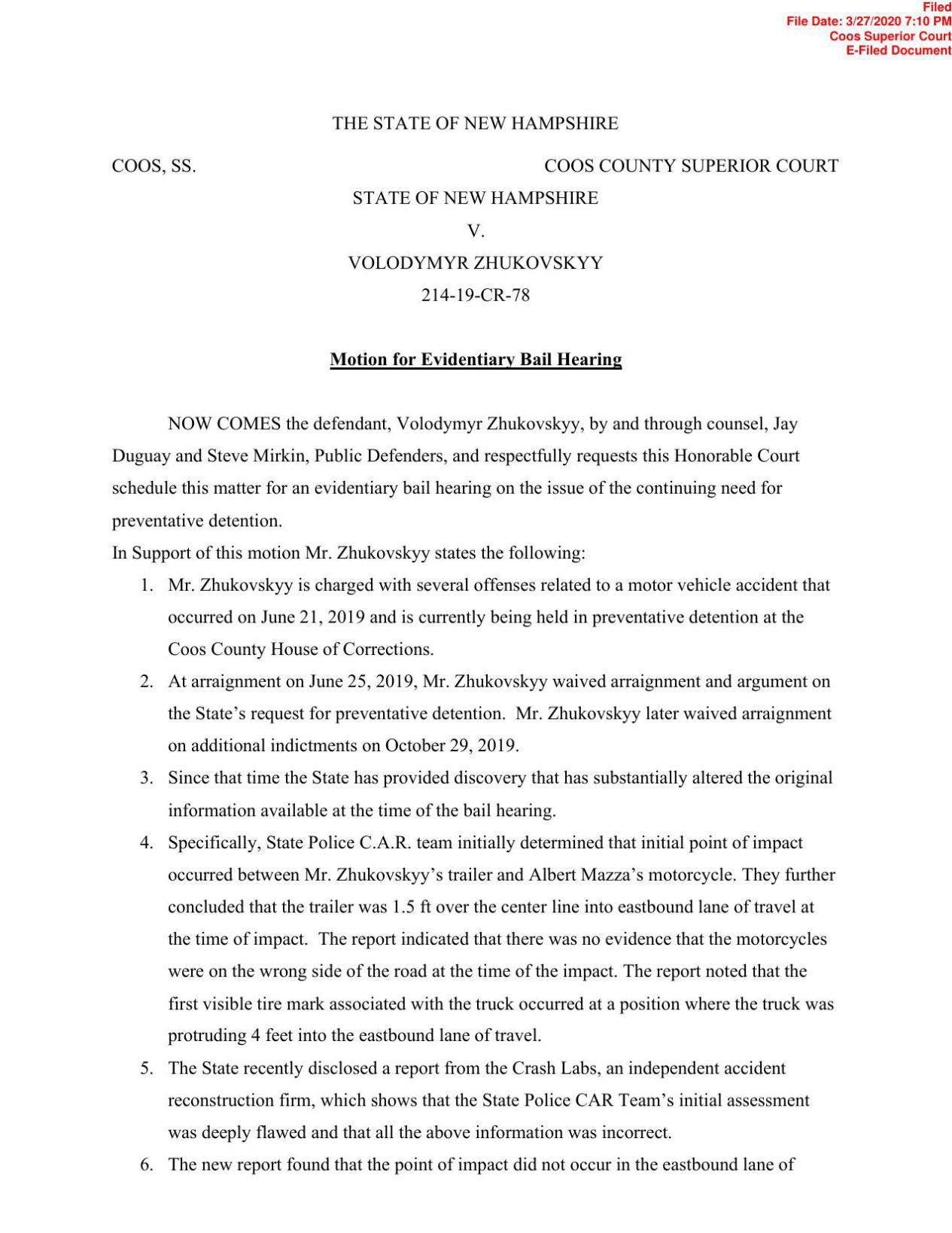 The lawyers wrote that the state disclosed that Mazza had been turned around looking back at the group of riders behind him just before the accident. His blood alcohol level was 0.135, compared to the legal limit of 0.08.

Duguay and Mirkin are asking a judge to release Zhukovskyy, who has been held in Coos County jail since June 25, on bail with numerous conditions.

If the attorney general objects as expected, a hearing likely would be held.

Zhukovskyy, who has a lengthy record of motor vehicle violations, faces seven charges, including negligent homicide, impaired driving and manslaughter.

Jury selection is scheduled for November.

His lawyers say that Zhukovskyy, if released, would not pose a danger. They suggest he be ordered to live with his parents, surrender his passport and not drive before trial.

CONCORD -- Director of Motor Vehicles Elizabeth A. Bielecki has released the following list of driving while intoxicated convictions. Please note the actual date of conviction may have preceded this announcement.

An Exeter woman sued her former employer claiming she was fired as a human resources manager after sending an email about COVID-19 to employees and requiring two employees to stay home for one week after going on vacations to China and Malaysia in January.

WASHINGTON — House Speaker Nancy Pelosi, the top Democrat in Congress, said on Sunday she thinks a deal can be reached with the White House on a coronavirus relief package and that talks were continuing.

Police clash with Portland protesters and press; more than 20 arrested

PORTLAND, Ore. — Police clashed with anti-racism protesters and pushed back members of the press in downtown Portland, Ore. into early Sunday morning, making more than 20 arrests.