CONCORD — A mentally ill person in treatment limbo — earmarked for transfer from the prison-run Secure Psychiatric Unit but unwanted at the New Hampshire State Hospital — goes before a state judge next week, hoping to win a transfer to the state hospital.

It will be Milan resident Anthony Heath’s second attempt to convince a judge to order him out of the prison-operated Secure Psychiatric Unit into a less restrictive setting.

He could be in for a long wait.

State corrections officials this week said 10 Secure Psychiatric Unit patients who have been accepted to the New Hampshire Hospital are awaiting transfer. Another three patients are adjusting their treatment plans to seek reconsideration for admission to the state hospital.

“The pending transfer number further illustrates the need for the construction of a new facility as legislated,” said Laura Montenegro, a spokesman for the Corrections Department.

Two weeks ago, a federal judge rejected Heath’s initial effort for a judicial-ordered transfer. The judge said the issue should be addressed in state court.

Heath has been at the SPU for 3½ years, sent there 10 days after he was involuntarily committed to the state hospital in April 2016 after a judge ruled him incompetent to stand trial on first-degree assault and assault with a deadly weapon charges.

“Mr. Heath has a liberty interest in receiving mental health treatment in the least restrictive environment necessary to achieve the purposes of treatment,” his lawyers, Robert Carey and Kelly Stonebraker, wrote in papers filed in Merrimack County Superior Court in early November.

The court filings highlight the ongoing issue with how New Hampshire treats mentally ill people who are at a high risk of hurting others. 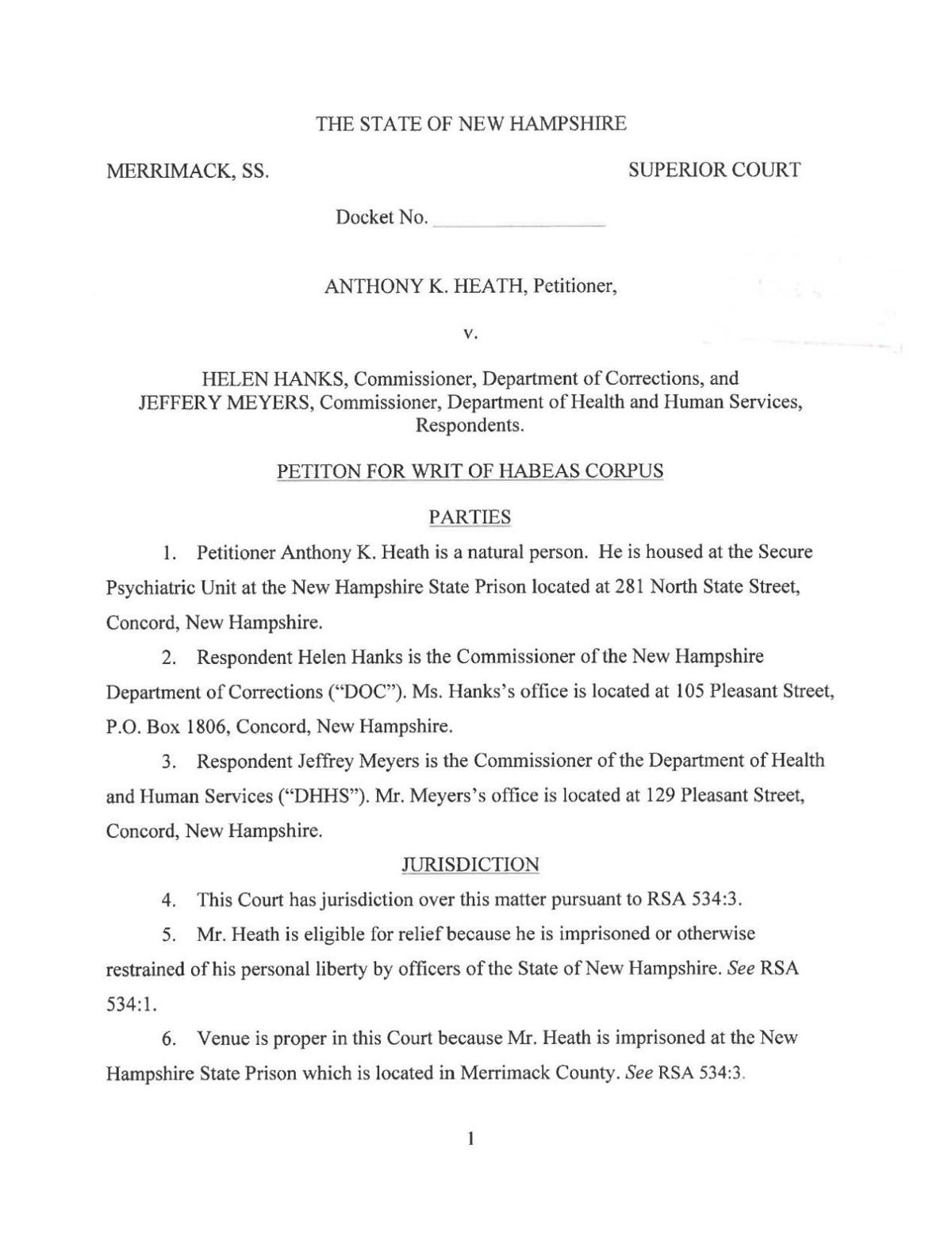 New Hampshire is one of the few states that send some of its dangerous, mentally ill people to prison grounds to live and be treated, even if they are not convicted of a crime. As of Tuesday, the SPU housed 43 patients.

That practice has come under intense criticism. Last summer Gov. Chris Sununu signed a budget that provides $8.75 million in partial funding to build a 24-bed forensic hospital on the grounds of the state hospital.

The Department of Health and Human Services, which operates the state hospital, is identifying a site and developing architectural drawings, said department spokesman Jake Leon.

DHHS will oversee the operation of the forensic hospital once it opens, Leon said. It will be more secure than the state hospital and will maintain a therapeutic environment, he said.

Sununu has nominated the chief executive of the state hospital, Lori Shibinette, to be the next commissioner of health and human services.

According to court filings, the SPU requested the state hospital in 2017 to evaluate Heath for a transfer.

However, the state hospital said he shouldn’t be transferred, citing issues with his willingness to take medication.

In July 2018, Heath’s mother filed a federal claim based on civil rights and the American Disabilities Act to have her son moved to the state hospital. Carey, a lawyer with the Concord-based Orr & Reno law firm, agreed to take the case for free. 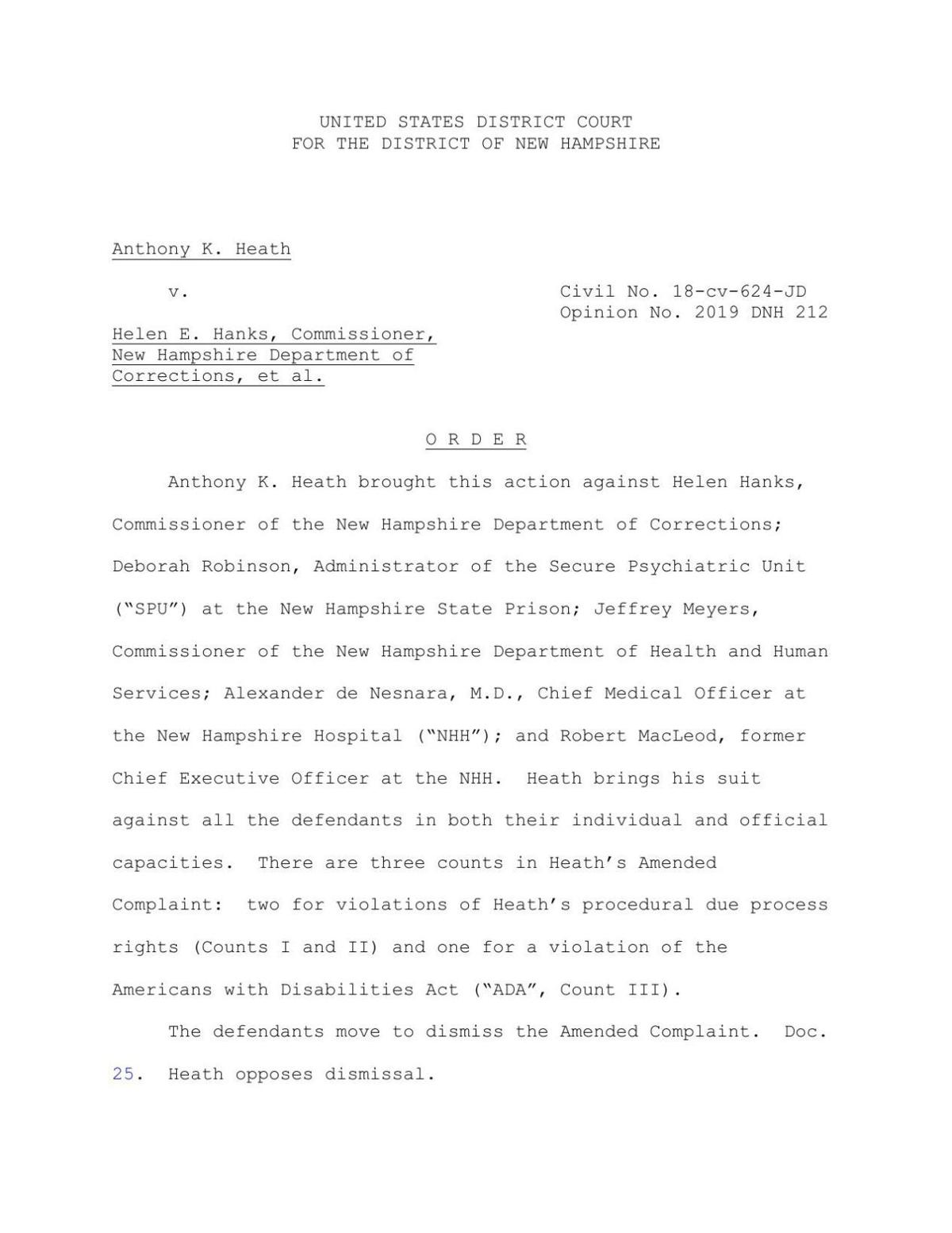 Carey said he and Stonebraker will confer with Heath and his mother about whether to appeal DiClerico’s order. But he noted that DiClerico determined that a habeus corpus petition, not a civil rights claim, was the proper avenue to address the matter.

That is the basis for the Merrimack County case.

She noted that a memorandum of understanding exists between Corrections and Health and Human Services departments regarding transfers.

If the two agencies cannot agree on a transfer, they can bring in an outside party to decide.

“It allows for an appropriate clinical disagreement,” Hanks said.

Hanks also said a delayed transfer to the state hospital shouldn’t have a negative impact on an SPU patient. If a person’s condition does deteriorate while awaiting a transfer, they weren’t ready for a transfer, she said.

The lawyers said Heath, who has never been convicted of a crime, is imprisoned with convicted criminals and deserves to be treated at either the state hospital or community treatment centers.

In March 2016, a Coos County Superior Court judge ruled him incompetent to stand trial, dismissed the indictments and kept him in custody for further evaluation.

Later that month, another judge determined his mental illness created a “potentially serious likelihood of danger to himself or others” and involuntarily committed him to the state hospital. Ten days after his arrival, hospital officials signed an emergency transfer to the SPU.

Then in March 2018, the SPU sought to remove Nancy Heath as her son’s guardian. A probate court removed her in January 2019. The court restored to Heath his rights to initiate, defend and settle legal claims.

Spinning wheels aren't the only things that keep Peloton Interactive moving -- the home-exercise company is also waging patent wars with its rivals.