The New Hampshire Supreme Court last week rejected an effort by Black grandparents from North Carolina to upend a guardianship that eventually led to their grandchildren being adopted by two White families in New Hampshire.

Clyde Lunsford said on Friday that he had expected the ruling. He is now preparing a civil case that will challenge whether the adoptions of his three biracial grandchildren are in their best interest.

In January, the Division for Children, Youth and Families finalized the adoption of his three grandchildren — a 6-year-old girl and 4-year-old twin boys — to two separate families in Sullivan County, which is overwhelmingly White.

Lunsford said he and his wife, Sandra, have not been able to see the grandchildren since 2017. He said his family’s access to the twins was cut off once he began legal challenges to the adoption.

The case, detailed in the New Hampshire Sunday News last week, cast a light on the controversial issue of transracial adoptions.

“I really feel New Hampshire, the DCYF and (the older child’s mother) feel they were saving these kids from being Black,” Clyde Lunsford said from his home in Durham, N.C. “What happened to me in New Hampshire would never happen in North Carolina. Diversity means everything here.”

The children’s maternal aunt adopted the oldest child. The twins are in a separate family with no blood ties. The two families meet frequently and the three know they are siblings, the mother of the oldest child has said.

The Lunsfords challenged a judge’s decision to award guardianship of the children to DCYF before their adoption. They had argued they were never fairly assessed and as grandparents, deserved preference over DCYF. 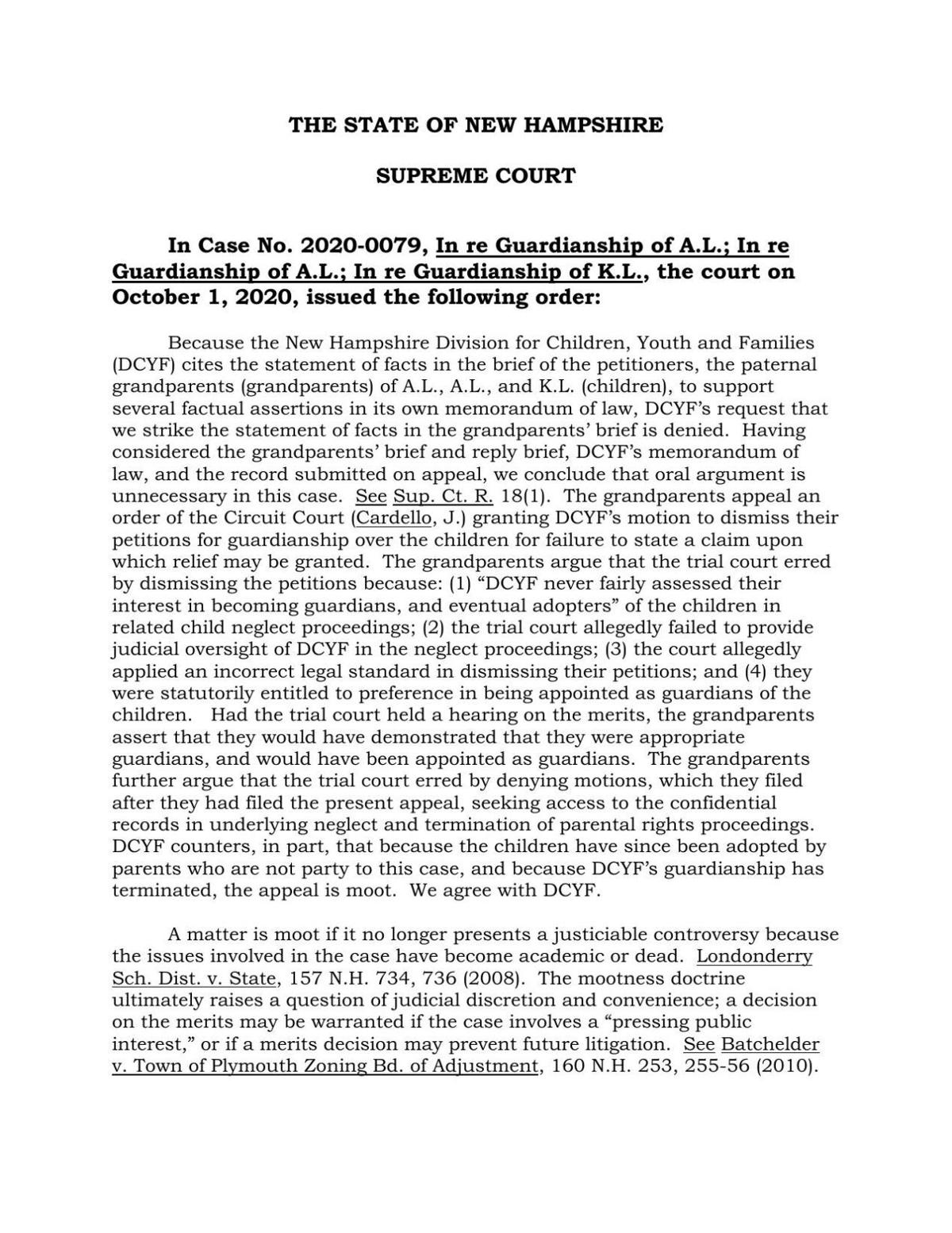 But the justices sided with DCYF, whose lawyers said any guardianship issue became moot once DCYF adopted out the children.

“The children now have parents who necessarily have fundamental rights as the children’s parents and are presumed to act in the children’s best interest,” the ruling read.

The lawyer representing the Lunsfords, Joshua Gordon of Concord, has asked the Supreme Court to rethink one aspect of the decision and grant access to records in the case.

Lunsford said he has been in touch with Black Lives Matter and NAACP in New Hampshire and hopes they will serve as watchdogs in a civil suit.

It cuts to the bone, he said, to have no contact with his grandchildren. He believes New Hampshire decision-makers are influenced by negative media portrayals of African-Americans.

He said a hallmark of systemic racism is a lack of accountability and consequences.

“I can’t believe they can be so heartless as to cut us off,” he said. He used to wear a badge and investigate people for security clearances for the Department of Defense.

But none of that matters, he said.

“If you’re Black in America,” Lunsford said, “you can have your grandchildren taken from you.”

WASHINGTON - A federal appeals court dealt Ghislaine Maxwell, the alleged madam to disgraced financier Jeffrey Epstein, twin blows late Monday by declining to consolidate her appeals in numerous overlapping cases and striking down her effort to thwart release of a controversial deposition sh…

CONCORD — Director of Motor Vehicles Elizabeth A. Bielecki has released the following list of driving while intoxicated convictions.