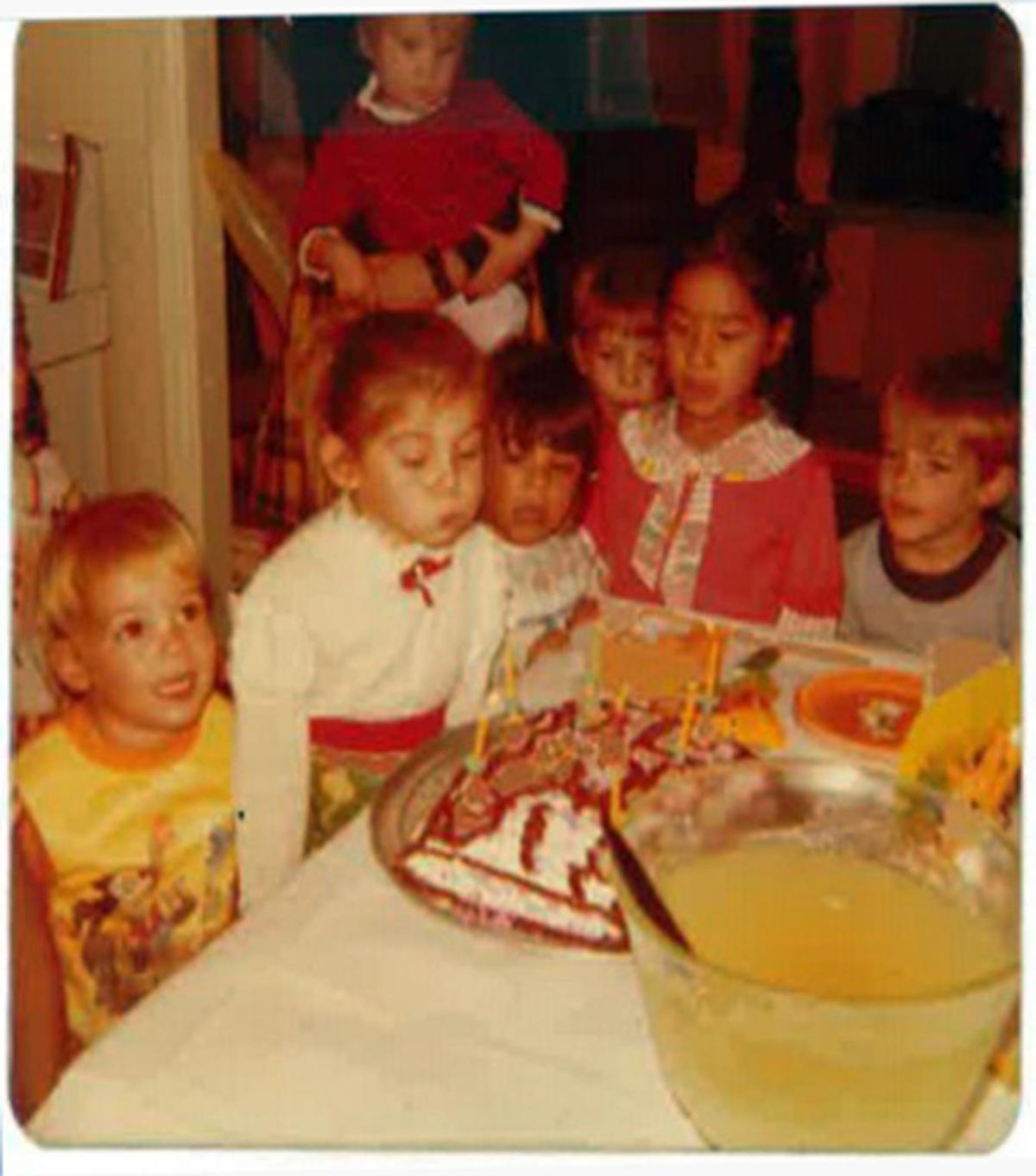 Marie Elizabeth Vaughn, the older daughter of Marlyse Elizabeth Honeychurch, blows out the candles on her birthday cake. Vaughn would have been grade-school age at the time of her murder. Authorities are asking for the public’s help to figure out where the party took place. 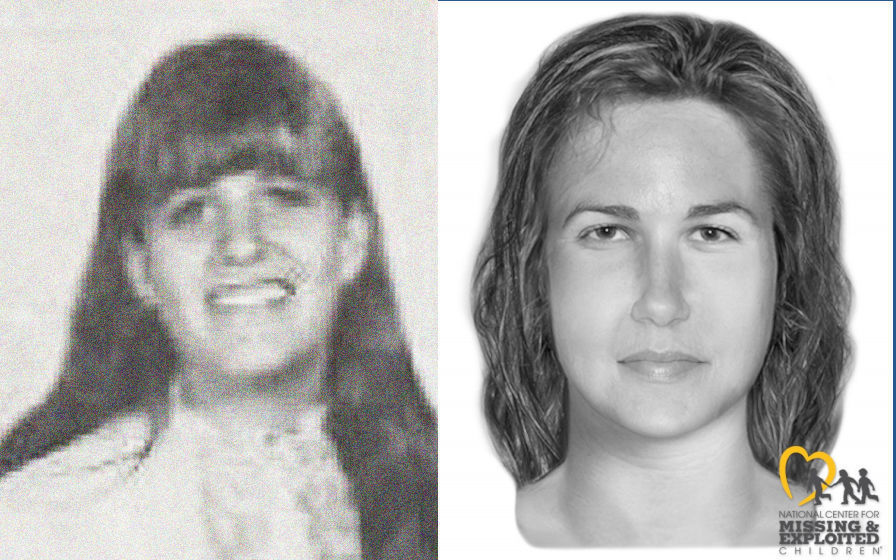 Marlyse Honeychurch was the mother of two of the three child victims. 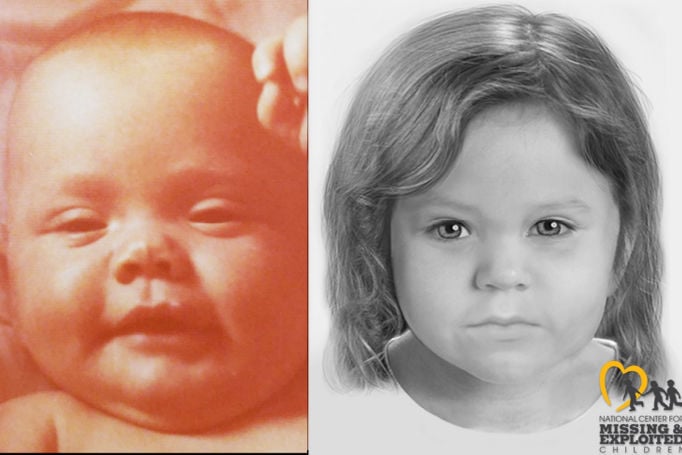 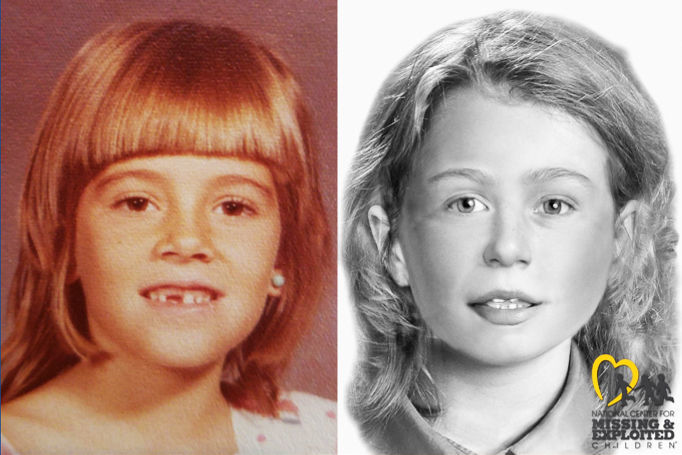 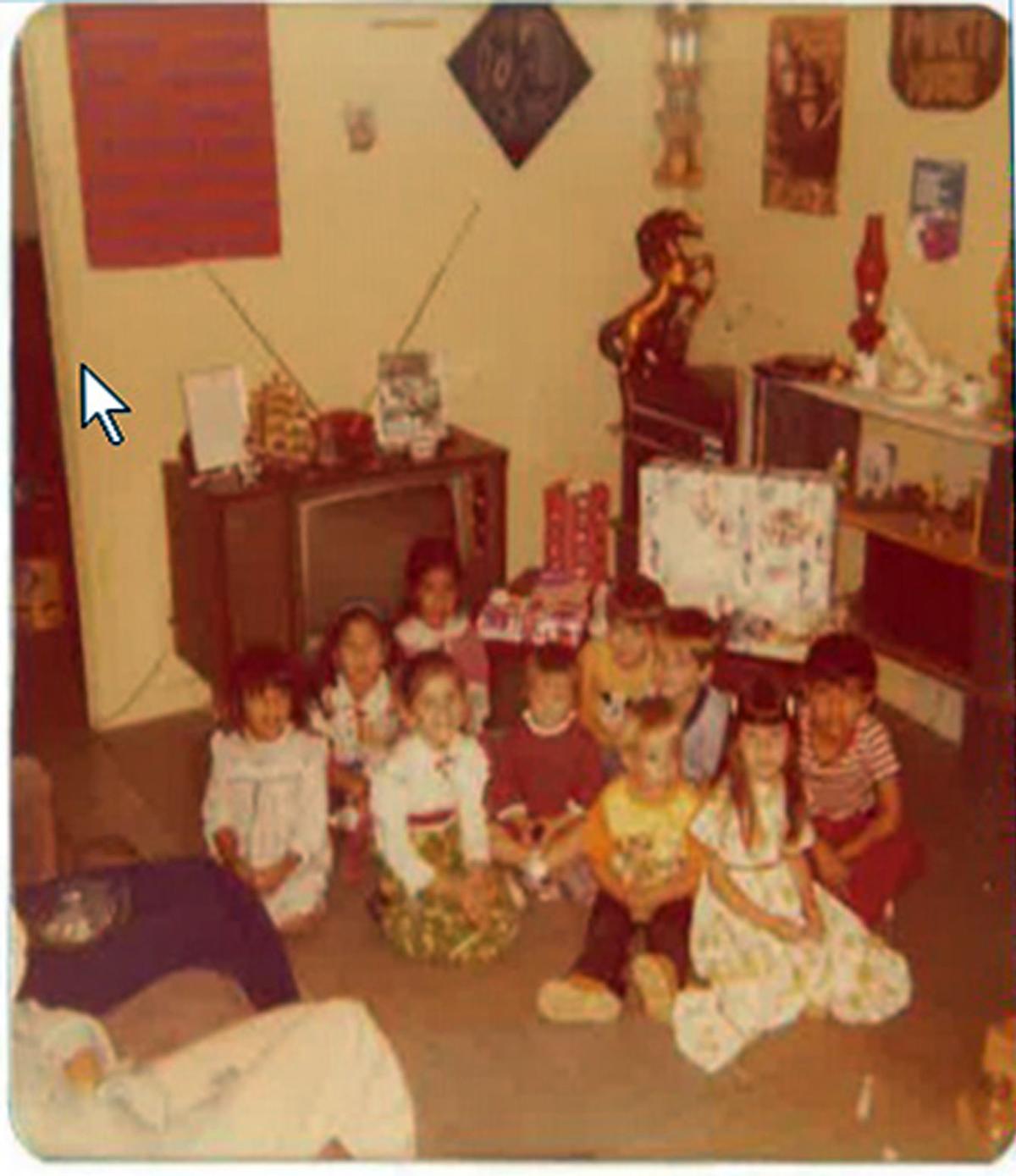 Authorities hope the photos from Marie Elizabeth Vaughn’s birthday party will help someone remember the setting.

Marie Elizabeth Vaughn, the older daughter of Marlyse Elizabeth Honeychurch, blows out the candles on her birthday cake. Vaughn would have been grade-school age at the time of her murder. Authorities are asking for the public’s help to figure out where the party took place.

Marlyse Honeychurch was the mother of two of the three child victims.

Authorities hope the photos from Marie Elizabeth Vaughn’s birthday party will help someone remember the setting.

Faded with age, the photo captures a happy moment in a child’s life: a little blond girl blowing out birthday candles, surrounded by playmates.

But within a few years, that child would be dead, her small body stuffed in a barrel along with that of her mother, hidden in Allenstown near Bear Brook State Park.

The barrel was discovered in 1985, but it would take another 34 years for investigators to learn the identities of the child, her mother and her little sister, whose remains were found in a second barrel in 2000. Authorities announced Thursday at a press briefing that Marlyse Honeychurch and her daughters Marie Vaughn and Sarah McWaters are three of the four Allenstown victims, murdered by a serial killer named Terry Rasmussen.

Still unknown is the identity of the fourth victim from the barrel found in 2000, a 2- to 4-year-old girl who DNA tests confirmed was Rasmussen’s daughter.

The case was solved by a combination of DNA technology and what Associate Attorney General Jeffery Strelzin called “old-fashioned detective work.” But this is also a story about families who never gave up trying to find their loved ones who seemed to disappear without a trace all those years ago. And a librarian who connected the dots.

Rebekah Heath is a research librarian from Simsbury, Conn. Authorities say it was her work connecting online postings from relatives looking for Marlyse Honeychurch and her daughters to the Allenstown killer that helped them finally give back to the victims their names and their dignity.

Heath traveled to New Hampshire on Wednesday night after state police notified her about the press briefing the following day. Beforehand, she met privately with family members. And she was sitting in the front row with them when photos and names of the three victims were displayed on a giant screen.

And with that, the three victims were suddenly heartbreakingly real, a young mother and two little girls who died at the hands of a monster.

It was an emotional moment for Heath, who had been in touch with family members since last fall. “When you know the faces, when you know their names, they’re not strangers anymore,” she said.

Strelzin felt it, too. “You think about how they must have died, and what it must have been like,” he said. So while there was satisfaction in solving this piece of the mystery, he said, “At the same time, these people died a horrible death and this guy really never got held accountable for it at all.”

In a telephone interview Saturday, Heath said she’s always been interested in murder mysteries and true crime, calling herself an “armchair detective.”

The Bear Brook murders have fascinated her for years. In 2016, after authorities connected a man who called himself Bob Evans to the murders, and identified him as the father of the so-called “middle child,” she started digging. She looked for searches on ancestry sites where people post queries about long-lost relatives and kept a record of those that seemed promising.

One of those posts was in 1999 from a relative looking for Sarah McWaters. There were others, from relatives looking for Marlyse and her daughters.

In 2017, authorities revealed that the killer’s real identity was Terry Rasmussen, a man who died in prison in 2010 after killing his common-law wife in California.

Last October, Heath reached out to the woman who was looking for Sarah so long ago and offered to help. As they talked, the woman shared information about Sarah’s mother, Marlyse. “And then she just threw in, ‘Oh, and she married a guy named Rasmussen.’ ”

She knew right away: “This is something huge.”

The very next day, Heath reached out to the other side of the family and connected with one of Marlyse’s sisters, who told her she hadn’t seen her since Thanksgiving in 1978. “And she said Marlyse had left with a guy named Terry.”

Heath relayed what she had learned to a San Bernadino, Calif., detective who had been working on the case out there. Soon after, she got a call from a New Hampshire State Police detective asking about her research.

Over the next several months, she stayed in touch with the family members, who sent her photos of Marlyse and her daughters. She was struck by how closely all three resembled the composites drawn up years ago of what the Allenstown victims might look like.

But it was only when Heath got the call about the press briefing that she knew she had been right.

State Police Lt. Michael Kokoski, now commander of Troop C, was in charge of the cold case unit for years and had worked on the Bear Brook case since 2010. When the team learned of Heath’s research, he said, “I think everyone was very enthusiastic about it and cautiously optimistic.”

It was “very gratifying,” Kokoski said. “It gives the dignity back to these victims. That’s obviously the most important and most rewarding thing.”

The public’s help proved vital to solving the case, he said. So did the families’ efforts to find Marlyse and her girls, he said. “The fact that those posts are out there, trying to account for what could have happened to them, serves as testament they weren’t forgotten and people were looking,” he said.

Now authorities are asking the public to look closely at the photos they released showing Marie Vaughn at her 7th or 8th birthday party. Believed to be in 1978 or 1979, the party could have been somewhere on the East Coast, perhaps even in New Hampshire.

“If anyone recognizes any of the children in that photograph, or the location, we would certainly be interested,” State Police Sgt. Matthew Koehler from the cold case unit said at Thursday’s briefing.

The timing of those photos coincides with when Rasmussen, who was going by the alias Bob Evans, lived in Manchester, working at the Waumbec Mills as head electrician. Authorities say when the mill was closing, Rasmussen was dumping barrels from the mill on property adjacent to Bear Brook State Park that was owned by a co-worker.

“Evans” got arrested three times in 1980, for writing a bad check, theft of services (electricity) and diverting electric current. On the first two arrest reports, he listed his spouse as Elizabeth. An Elizabeth Evans also signed for a certified letter delivered to Robert Evans on Jan. 9, 1980, at 925 Hayward St.

Elizabeth is Marlyse Honeychurch’s middle name, leading investigators to wonder: Could Marlyse also have been using an alias during that time?

But on the third arrest report in October 1980, the line for a spouse’s name was left blank.

The following year, Rasmussen was dating Denise Beaudin, a 23-year-old Goffstown woman with a 6-month-old daughter. They lived together at 925 Hayward St. in Manchester — the same address where “Elizabeth Evans” had signed for the certified letter the previous year. The three disappeared around Thanksgiving in 1981 and Beaudin was never seen again.

Beaudin’s daughter was later abandoned by Rasmussen in California in 1986. After Rasmussen was arrested for murder in California in 2002, DNA tests proved he was not the father of the girl he had left behind. Years later, that now-adult daughter’s search for her true identity led authorities to identify Rasmussen as the Bear Brook killer.

And now three of his four New Hampshire victims have been identified as well.

Some questions remain, including the identity of Rasmussen’s daughter, the “middle child” buried in Allenstown.

Did Rasmussen kill Marlyse and her daughters before taking up with Denise Beaudin in 1981? And what happened to Beaudin?

Kokoski said another question is whether Rasmussen had more victims in other places.

But investigators “remain hopeful” that they will identify the last child, and her mother, especially with the renewed public attention to the case, Kokoski said. “Just one little detail could lead to something about the remaining girl and where she’s from and who she is,” he said.

The families of Marlyse, Marie and Sarah, Strelzin said, took some comfort knowing that Rasmussen died in prison, he said. “That he wasn’t a free man.”

As for Heath, she’s thinking about changing careers, to do this kind of work full time. And she plans to keep working on the Bear Brook case. “My focus is that middle child,” she said. “She deserves her name too.

Here’s whom to call:

• Manchester Police Department at 668-8711 or LHobbs@manchesternh.gov

They were identified as Marlyse Elizabeth Honeychurch, Marie Vaughn and  Sarah McWaters.

A daughter's anguish: Her father was the Bear Brook killer

Last year, police told Andrea Stiers that her father was a serial killer.

Genealogical databases are a gold mine for police, but with few rules and little transparency

Orlando, Fla., police detective Michael Fields was sure he had the break he needed right in front of him to close in on a serial rapist: a lis…

The salt shaker teetering on a pot lid on his naked back could not fall.

NEWBURYPORT, Mass. — More than 18 months after being charged with beating his girlfriend — who died a month later — a New Hampshire man was sentenced to two years of probation Wednesday in Newburyport District Court.

A federal grand jury in Minneapolis has indicted four ex-police officers involved in the arrest and death of George Floyd on charges they violated Floyd's civil rights while detaining him last year, according to court documents unsealed on Friday. The three-count indictment names Derek Chauv…

A Rhode Island man was found to be in possession of cocaine and marijuana following a high-speed chase in Manchester early Thursday, police said.

A Colorado man pleaded for the safe return of his missing wife. A year later, he's charged with her murder.

His voice raspy and his eyes on the verge of spilling tears, Barry Morphew made a desperate plea last May for the safe return of his wife, Suzanne, who had been missing for a week after not returning from a Mother’s Day bike ride.