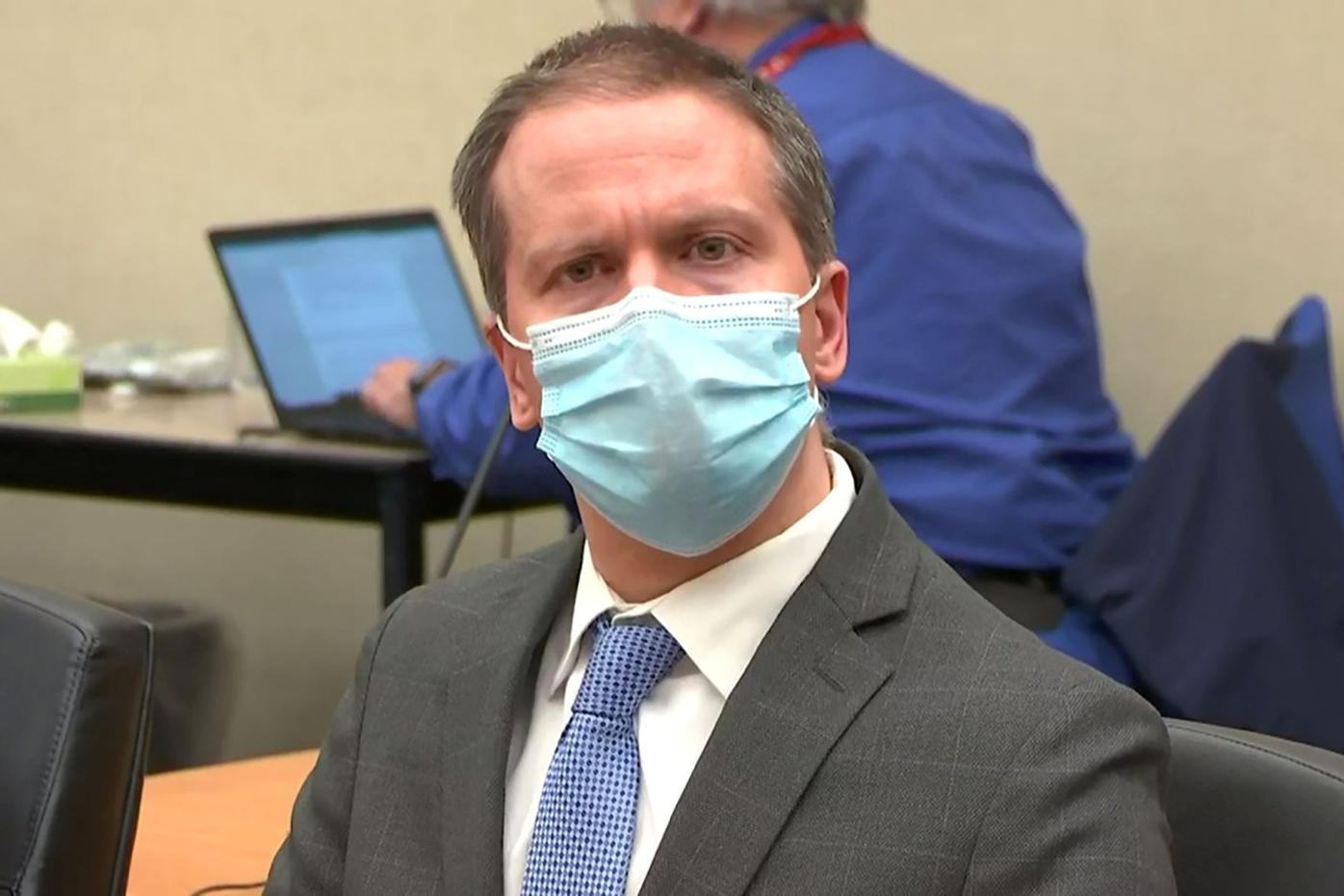 Former Minneapolis police officer Derek Chauvin listens as a jury finds him guilty of all charges in his trial for second-degree murder, third-degree murder and second-degree manslaughter in the death of George Floyd with his defense attorney Eric Nelson in Minneapolis, Minnesota, U.S. April 20, 2021 in a still image from video. 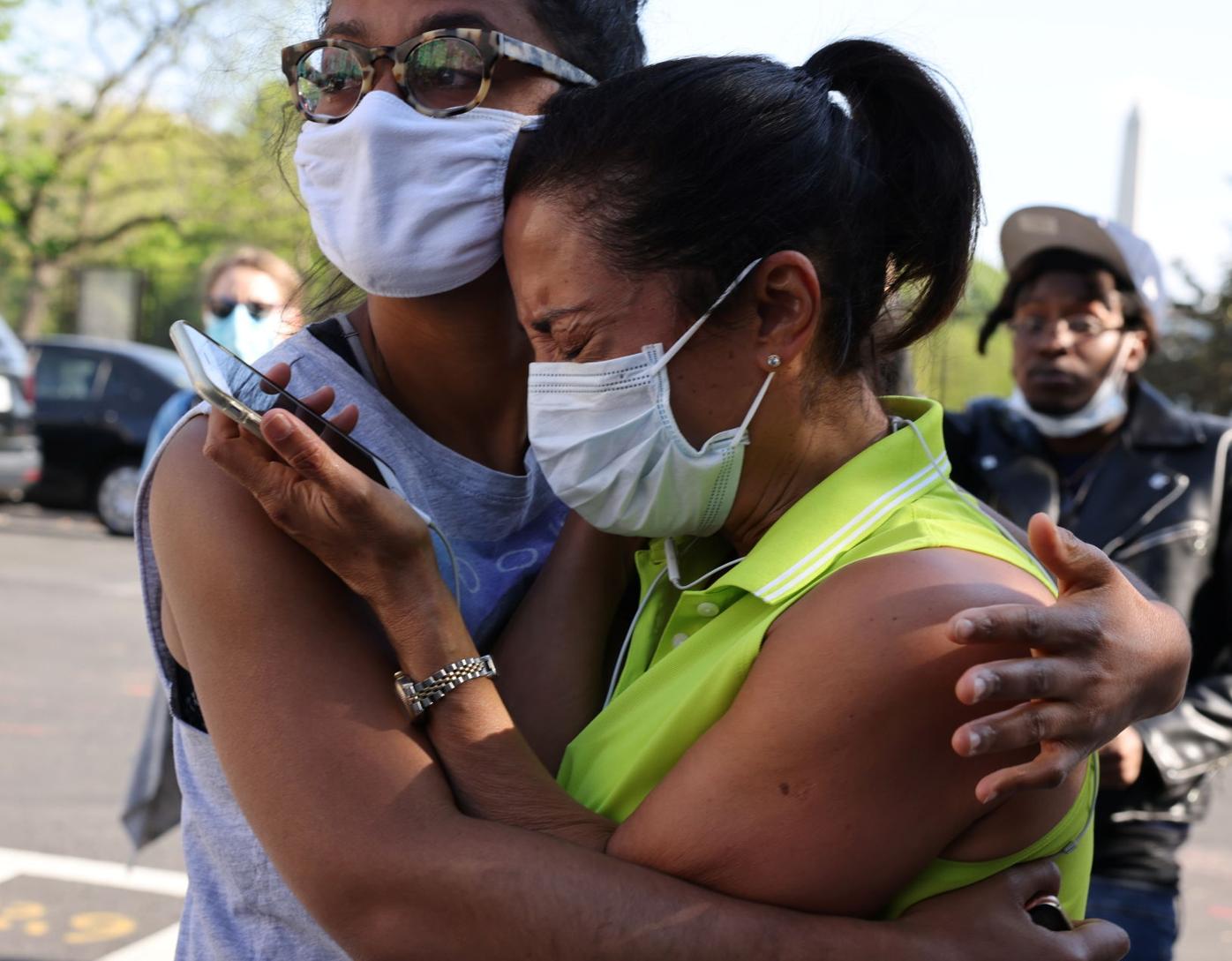 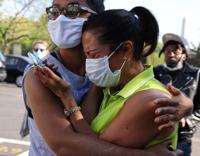 People react after the verdict in the trial of former Minneapolis police officer Derek Chauvin, found guilty of the death of George Floyd, at BLM Plaza in Washington, D.C., U.S., April 20, 2021. 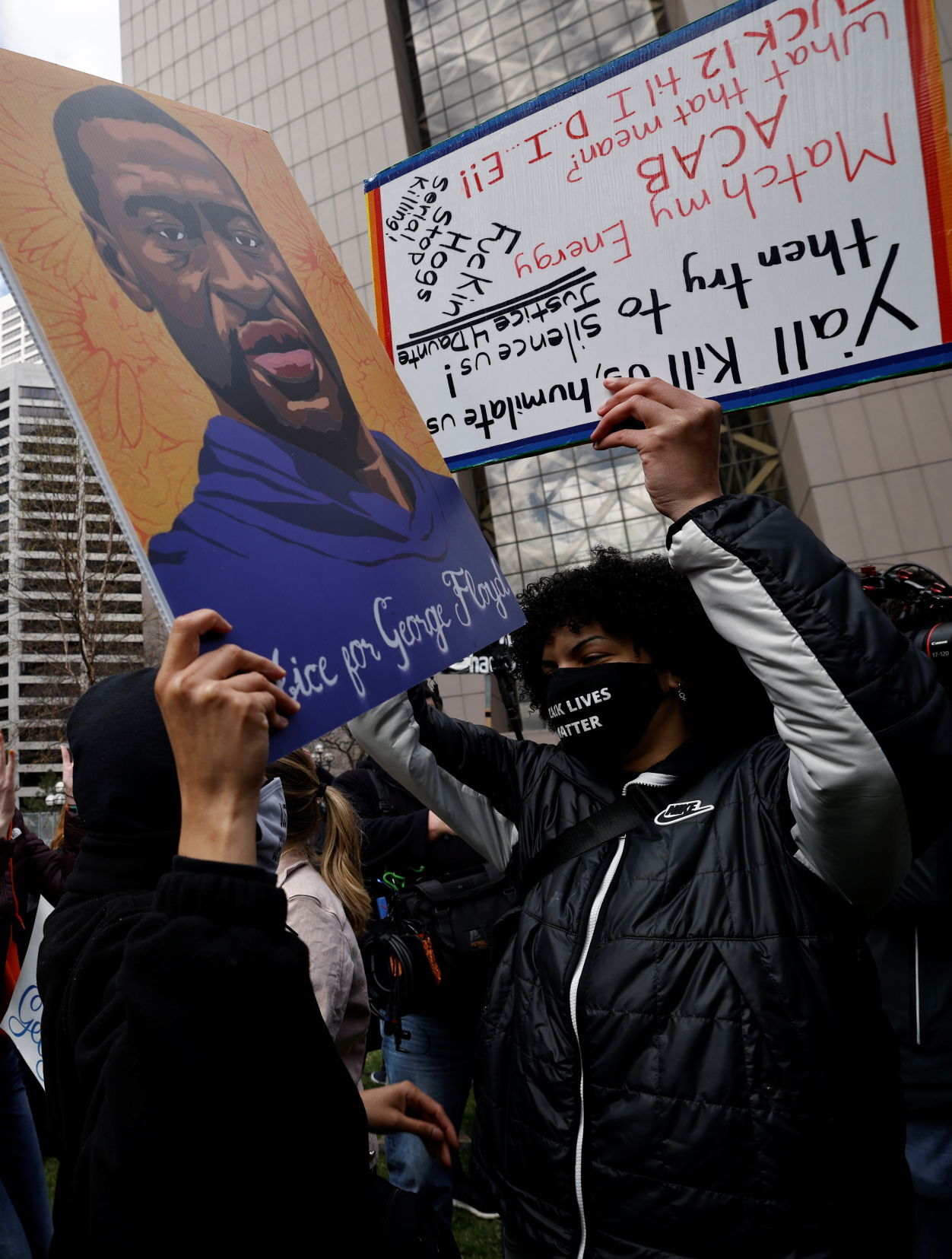 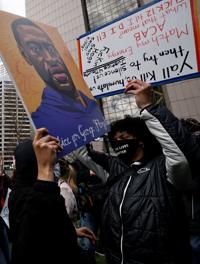 People react after the verdict in the trial of former Minneapolis police officer Derek Chauvin, found guilty of the death of George Floyd, in front of Hennepin County Government Center, in Minneapolis, Minnesota, U.S., April 20, 2021. 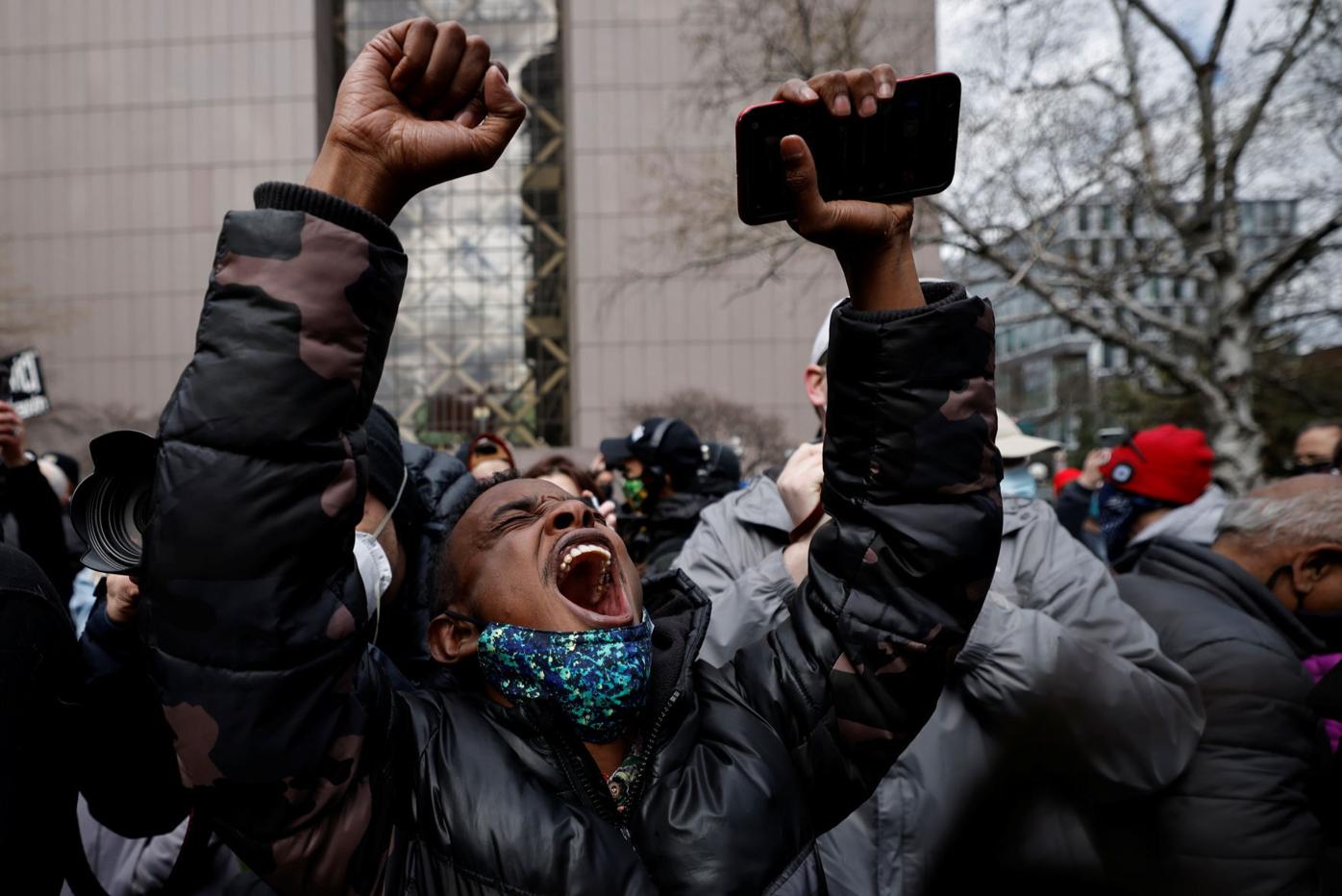 A person reacts after the verdict in the trial of former Minneapolis police officer Derek Chauvin, found guilty of the death of George Floyd, in front of Hennepin County Government Center, in Minneapolis, Minnesota, U.S., April 20, 2021.

Deliberations concluded after the prosecution and defense teams presented nearly six hours of closing arguments that focused on vastly different views about the circumstances that led to Floyd's death in May outside Cup Foods in Minneapolis.

The jury of 12 people - six White, four Black and two multiracial - watched as both sides on Monday played back footage of Chauvin kneeling on Floyd for more than nine minutes until the 46-year-old went limp.

Prosecutor Steve Schleicher summed up weeks of testimony from witnesses, medical experts and police officers by arguing to the jury that Chauvin "had to know" that he was killing Floyd when the officer had his knee on his back as the man was handcuffed, face down on the street, crying out for breath and for his dead mother. Schleicher on Monday pointed to Chauvin's ego and refusal to take his knee off Floyd when onlookers yelled at him to do so as to why Floyd had died.

"Believe your eyes. What you saw, you saw," Schleicher said. He added, "The defendant, he chose pride over policing."

Defense attorney Eric Nelson on Monday asked the jury to consider the "totality of the circumstances," including what happened before Chauvin arrived at Cup Foods. Throughout the trial, Nelson said Floyd died of a combination of drugs in his system and preexisting health problems, not his client's knee. The defense attorney spent most of his closing arguments defending Chauvin's use of force and behavior, saying Chauvin had behaved as any "reasonable officer" would.

"The nine minutes and 29 seconds ignores the previous 16 minutes and 59 seconds," Nelson argued.

As Minneapolis braces for potential unrest - buildings have been boarded up and National Guard members are fanning out in and around the city - Democratic Minnesota Gov. Tim Walz and local officials sought to show solidarity with community activists and emphasize that they intend to prioritize de-escalation in the coming days.

"Our goal is de-escalation and nonconfrontation at all chances," Walz told reporters.

On Tuesday, President Joe Biden said he was praying for the "right verdict" in the trial.

"It is overwhelming in my view," the president said.

Second-degree unintentional murder is the most serious charge brought against the former Minneapolis police officer. For a conviction, jurors must conclude that prosecutors showed beyond a reasonable doubt that Chauvin caused Floyd's death while kneeling on him for more than nine minutes.

Because Chauvin has no criminal record, the second-degree-murder charge carries a presumptive prison sentence of 12 1/2 years, according to Minnesota sentencing guidelines. If he had a criminal past, Chauvin would have been looking at a maximum sentence of 40 years.

For the third-degree-murder charge, the state attempted to prove that Chauvin caused Floyd's death "by perpetrating an act eminently dangerous to others and evincing a depraved mind, without regard for human life." Judge Peter Cahill initially dismissed the charge, but the Minnesota Court of Appeals ruled that he was wrong to do so. He reinstated the charge last month.

Like that of the other murder charge, a third-degree-murder conviction in Minnesota carries a presumptive prison sentence of 12 1/2 years. Because Chauvin does not have a criminal record, he would avoid a maximum sentence of 25 years, according to the sentencing guidelines.

For second-degree manslaughter, prosecutors had to prove Chauvin was "culpably negligent" and took an "unreasonable risk" with Floyd's life. The state did not have to prove for this charge that Chauvin's actions intended to kill Floyd.

The charge carries a presumptive prison sentence of four years, according to the state, compared with 10 years if Chauvin had a criminal record.

It remains unclear how long the jury will take to come to its verdict in Chauvin's trial. As of midday Tuesday, the jury had deliberated for several hours over two days.

Before the deliberations last week, Cahill instructed the jurors to pack enough clothes for what has the potential to be a long process.

"If I were you, I would plan for long and hope for short," Cahill told jurors Thursday. "Basically, it's up to the jury how long you deliberate, how long you need to come to a unanimous decision on any count. And so because that's entirely up to you - whether it's an hour or a week - it's entirely within your province."

During deliberations, the jury will remain sequestered in a hotel until reaching a verdict. The jury is expected to deliberate from 8 a.m. to 7 p.m. daily.

The judge could declare a mistrial if the jury is hung, meaning it cannot reach a decision on at least one of the charges.

While it's uncertain how long deliberations will take, past high-profile cases offer suggestions as to when a verdict might be expected.

The jury in the O.J. Simpson murder trial took less than four hours to deliberate before returning a verdict of not guilty in 1995. A jury needed about eight hours in 2018 to find former Chicago police officer Jason Van Dyke guilty of second-degree murder in the death of Black teenager Laquan McDonald.

In Minneapolis, a jury took about 11 hours in 2019 to convict former police officer Mohamed Noor of third-degree murder in the death of Justine Ruszczyk Damond. Noor is the only police officer to be convicted of murder for an on-duty killing in Minnesota - and Chauvin would be the second.

A single juror out of line with the others' decision would be enough to lead the judge to declare a mistrial.

For N.H. activists, relief at Chauvin's conviction gives way to knowledge of work ahead

On hearing of the conviction of the former Minneapolis police officer who killed George Floyd in May 2020, local racial justice activists said…