CONCORD — Free Keene activist and cryptocurrency trader Ian Freeman will remain behind bars as he awaits trial on charges of money laundering, fraud and other financial crimes, a magistrate judge ruled Monday.

In a 17-page order that lays out the decision, Judge Andrea Johnstone said she is not confident that a freed Freeman will show up for trial in the future. She also feared that his freedom could allow his alleged crimes to continue.

During a hearing earlier this month, prosecutors described the wealth Freeman has built up in his exchange business, including 28 bitcoins, a $1.6 million cache this is almost impossible to trace and can be accessed anywhere.

“The defendant’s significant financial assets and the fact that much of his wealth is in the form of difficult-to-trace cryptocurrency weigh in favor of his detention,” Johnstone wrote.

Freeman’s attorney, veteran defense lawyer Mark Sisti, said he will appeal the ruling. He noted that Johnstone is a magistrate judge, and her decision can be appealed to the judge who will eventually try the case, Joseph Laplante.

“The next move is to get him out,” Sisti said. He did not rule out calling FBI and other law enforcement to testify in a future bail hearing.

Sisti said the Freeman case has none of the aspects that judges usually use to deny bail: a history of skipping court dates, a violent crime, drug trafficking or a gun-related crime.

The decision means that only two of the six people arrested earlier this month — Freeman and Nobody, who was formerly known as Rich Paul — remain in custody.

Aria DiMezzo, 34; Colleen Fordham, 60; Renee Spinella, 23, and Andrew Spinella, 35, have been released and must abide by conditions set by the government. Nobody has reserved the right to request bail in the future. 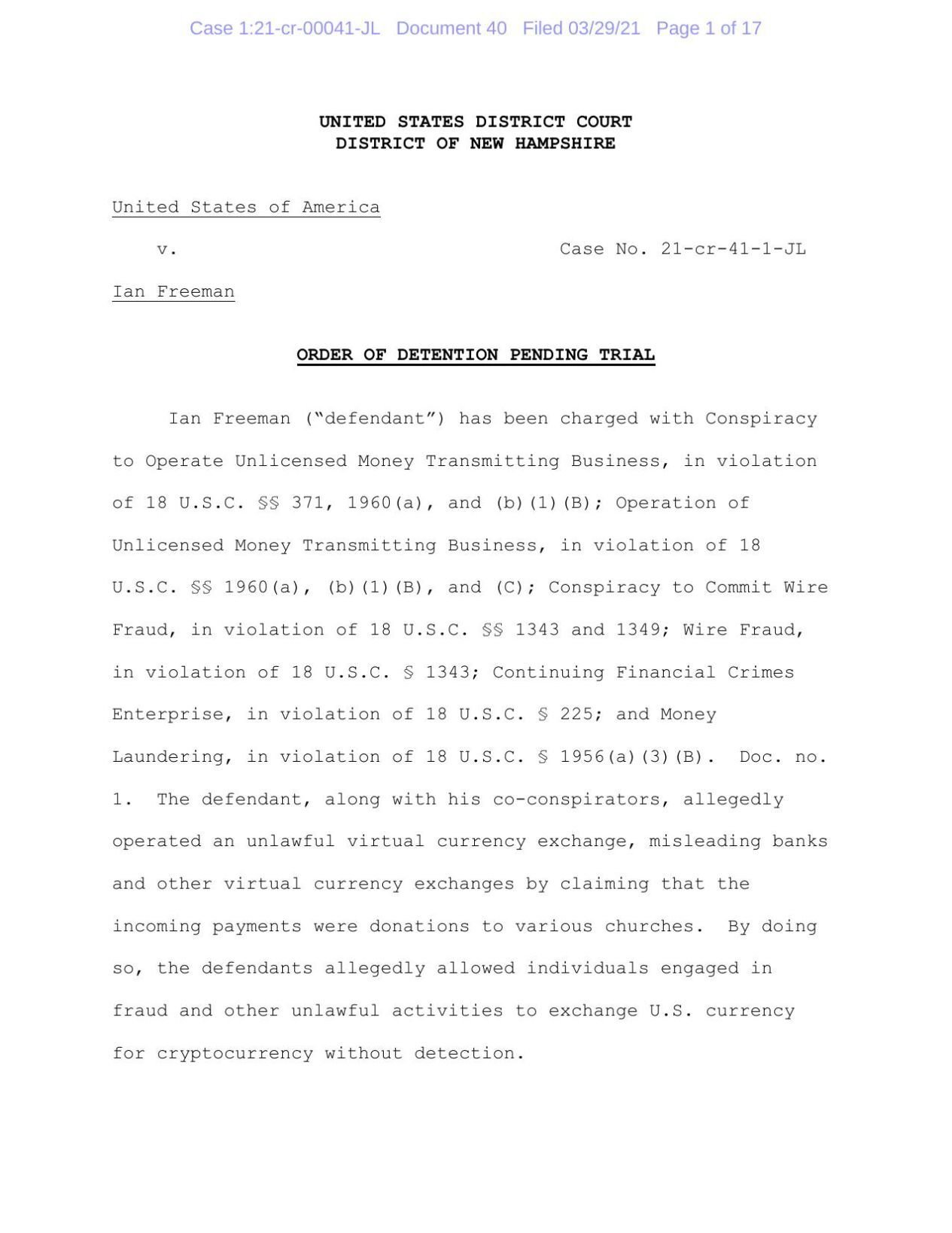 Most federal prisoners jailed pretrial in New Hampshire are held in the Merrimack or Strafford county jails.

Other reasons cited by Johnstone for keeping Freeman in custody:

Although he has lived in New Hampshire since 2006, he lacks meaningful ties to the state. His parents live in Florida and his sister lives in New York.

Freeman has transferred the property he owns in New Hampshire to the Shire Free Church.

His primary responsibility, hosting a radio show, does not require his presence in Keene.

His business partner, Mark Edington, is currently outside the country, possibly in Mexico.

He faces a significant penalties on some of the charges — a mandatory minimum of 10 years and maximum penalty of life in prison.

The case against him, built over five years by federal law enforcement, is strong, giving him another incentive to flee.

Freeman continued to operate his exchange despite being aware of the investigation against him.

Although Freeman offered to wear a tracking device, it lacks GPS functionality and could not track all of his movements.

Freeman did not provide enough detail about his offer to limit his electronic access and access to his currency exchange business.

Magistrate to rule on bail for Free Keene leader

Libertarian activist David Ridley is marching across New Hampshire — dressed as Gandhi — to protest the arrests of the so-called Crypto 6, six…