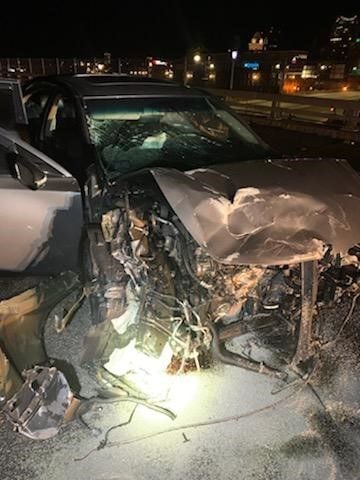 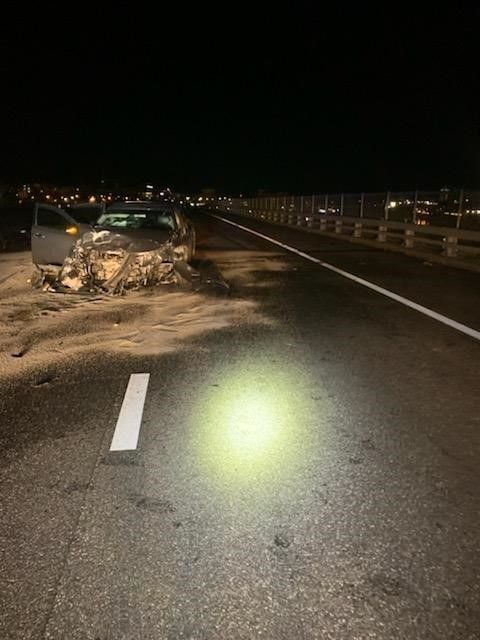 One of the vehicles involved in a head-on crash on Interstate 293 in Manchester early Sunday morning.

State troopers arrested a Massachusetts man early Sunday morning on a charge of drunken driving after they said he rear-ended a car on Interstate 293 south in Manchester and caused a serious head-on collision after careening into the northbound lanes.

The highway was closed in both directions for approximately three hours as troopers investigated the 2 a.m. crash near the Granite Street overpass, according to a news release.

Paul A. Bartlett Jr., 31, of Dorchester, was arrested and charged with felony-level driving while intoxicated. Paramedics took his passenger to Elliot Hospital with serious injuries.

State police said Bartlett was driving a 2014 Nissan Maxima at a high rate of speed when he crashed into the rear end of a 2008 Toyota Rav4, which ended up hitting a guardrail on the overpass. Bartlett then crossed the median before hitting a 2009 Nissan Titan head-on.

The drivers of the Rav4 and Titan, along with a passenger, were evaluated at the scene for minor injuries.

The crash remains under investigation. Manchester police and NHDOT assisted troopers at the scene.

Anyone with information relating to the crash is asked to contact Trooper R. Lacroix at 223-4381.

MANCHESTER — A Goffstown man has been charged with firing his gun at a vehicle that had struck his parked car and took off, Manchester police said.

Concord cop charged after prosecutors said he choked woman, slammed her arm in a door

A Concord police officer faces several charges after the alleged assault of a woman.

The son of Pamela Wood, a “beloved” Wakefield (Mass.) elementary school speech therapist who was found slain in her home earlier this week, has been arrested and charged with murder in connection with his mother’s killing, according to authorities.

Nearly every day, Jan Salvay checks for her nephew’s name on the Nevada Department of Correction’s website: Nicholas, 39, jailed in a credit card forgery case. Then she checks the state’s list of deaths in custody — just to make sure his name isn’t there.