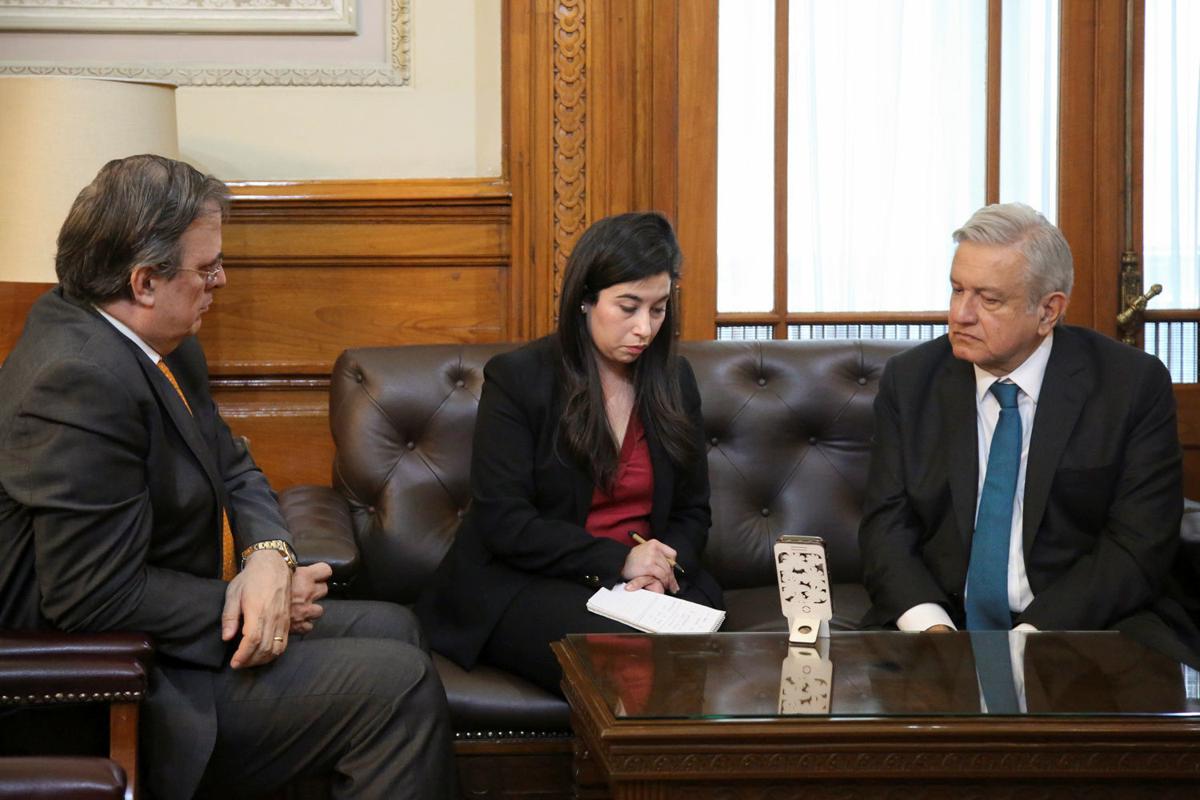 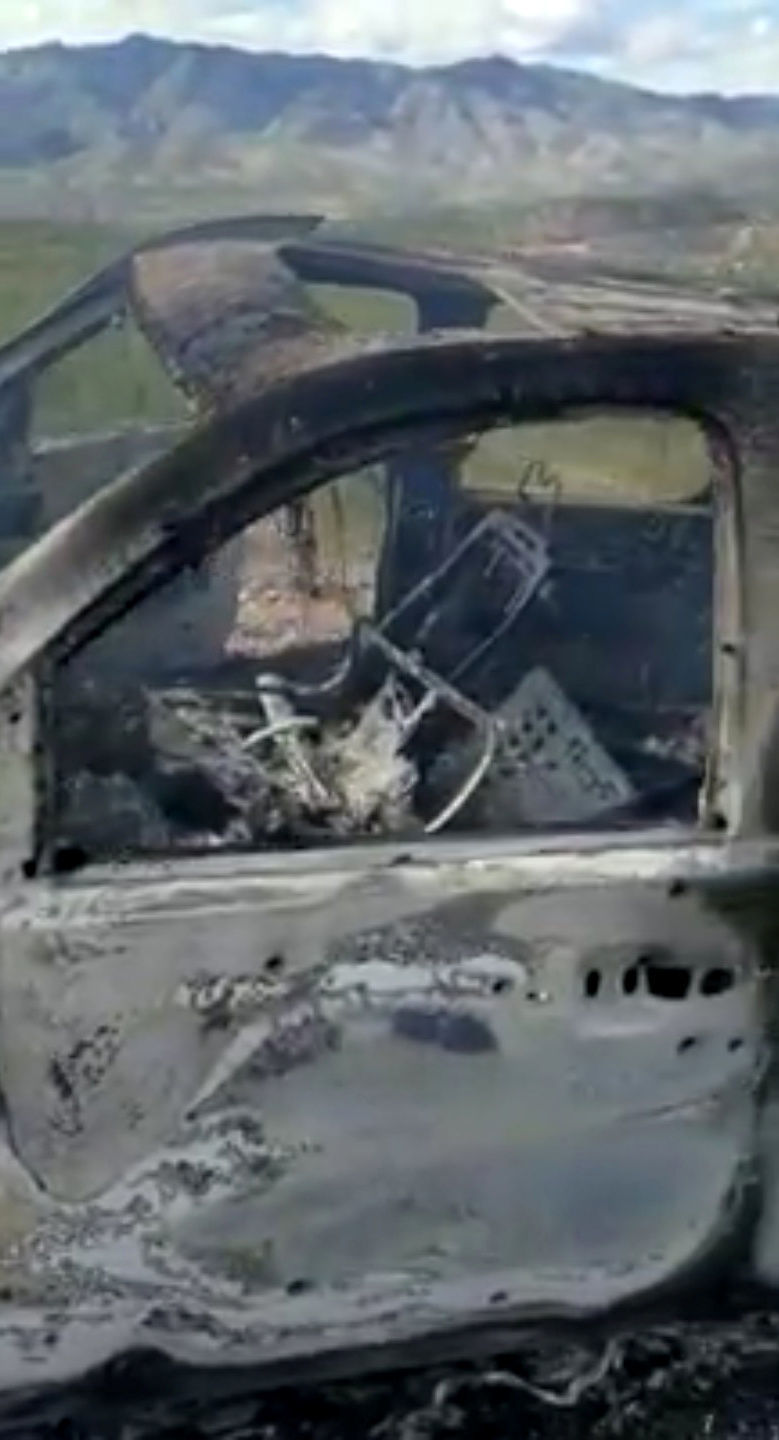 The burnt wreckage of a vehicle transporting a Mormon family living near the border with the U.S. is seen, after the family was caught in a crossfire between unknown gunmen from rival cartels, in Bavispe, Sonora, Mexico, on Monday in this picture obtained from social media.

The burnt wreckage of a vehicle transporting a Mormon family living near the border with the U.S. is seen, after the family was caught in a crossfire between unknown gunmen from rival cartels, in Bavispe, Sonora, Mexico, on Monday in this picture obtained from social media.

MEXICO CITY — Assailants have killed at least nine members of a fundamentalist Mormon community in Northern Mexico, authorities said Tuesday, shooting and burning the bodies of women and children in a brutal assault that highlighted the escalating danger posed by organized crime groups around the country.

Public Security Secretary Alfonso Durazo said three women and six children of the extended LeBaron family were killed in attacks on three vehicles Monday in the northern state of Sonora. The victims were part of a community of U.S.-Mexican dual citizens who have lived in Mexico for decades.

The vicious attacks on the women and children — some of whom were traveling to a wedding — stunned a nation still reeling from a series of violent incidents in recent weeks. President Andrés Manuel López Obrador has been heavily criticized for the botched attempt last month to arrest a son of former Sinaloa Cartel leader Joaquin “El Chapo” Guzman. Soldiers briefly detained Ovidio Guzmán in Culiacan, but Sinaloa cartel gunmen took control of the city and the government released him.

The attacks Monday drew international attention. President Trump tweeted that “a wonderful family and friends from Utah got caught between two vicious drug cartels, who were shooting at each other, with the result being many great American people killed.” He offered to help Mexico strike back at the cartels, saying they “have become so large and powerful that sometimes you need an army to defeat an army!”

López Obrador thanked Trump for the offer, but said Mexico would pursue the criminals. “This is a matter of our sovereignty,” he said.

Mexican officials said cartel gunmen might have mistaken the women’s SUVs for those of rival traffickers. But relatives of the victims said the gunmen knew they were firing on civilians.

“There’s been a lot of rival cartels fighting up in this area,” said Lenzo Widmar, one of the community members who found two of the destroyed vehicles. But he said a child who witnessed one of the shootings saw one of the mothers get out of her vehicle and put her hands up.

“They shot her anyway,” Widmar said. “They knew it was women and children.”

More than 200 bullet casings were found near the vehicles, state authorities said.

Widmar said the community had not received any threats recently. He said all the victims lived in Mexico.

Another family member posted video of a charred vehicle in which a mother and her four children had been traveling.

“This is how we live under the government of @lopezobrador,” Alex LeBaron tweeted. “Mexican Mormons, innocent women and children were ambushed in the Chihuahua sierra, shot and burned alive by the Cartels that rule in Mexico!”

Widmar said the attacks began Monday morning after the women left the community of La Mora in Sonora state. One woman, Rhonita Maria Miller, was heading to Arizona to pick up her husband from the Phoenix airport, he said. The other two were going to accompany her as far as a main highway near the border, he said, and then head for the community of LeBaron, in nearby Chihuahua state, to attend a wedding.

Miller had car trouble, Widmar said, and the convoy returned to La Mora. When the vehicles set out anew, he said, Miller fell behind the other two women.

LeBaron was just outside the village of San Miguelito when her Chevrolet Tahoe came under attack, Sonora state security officials said. Assailants shot her and her four children, including 8-month-old twins, relatives and officials said. The vehicle was then set on fire.

About 11 miles east, toward the Chihuahua state border, authorities found a second vehicle, a white Chevrolet Suburban, with the bodies of a woman and two children. Relatives identified them as Dawna Langford and her 11- and 3-year-old children. They said several other children escaped from the vehicle.

The third vehicle, also a white Suburban, was found about a mile east of the Chihuahua border. The body of a woman was found nearby. She was identified as Christina Langford Johnson.

Another member of the clan, Julian LeBaron, said he discovered Christina Langford’s body and her infant when he reached her vehicle.

“I found Christina,” LeBaron told Ciro Gómez Leyva, a news host on Radio Formula. “She was outside her car, face down, murdered, and I found her baby, who was still alive.”

“I don’t know if there’s a war here or what’s happening,” LeBaron said.

Johnson’s cousin Leah Staddon said Johnson’s 6-month-old baby was found on the floor of the vehicle.

“It’s amazing because we first heard that she was dead also, then they found her alive,” said Staddon, who once lived in La Mora but has moved to Queen Creek, Arizona.

One of the children is still missing, she said. Five of the surviving children were flown to Tucson for treatment.

“I think we’re all still in shock, just trying to survive minute by minute,” she said.

The LeBarons describe themselves as Mormons. They’re part of a polygamous offshoot of the Church of Jesus Christ of Latter-day Saints.

The attacks came weeks after the botched anti-drug raid in Culiacan. Soldiers attempted to arrest Ovidio Guzmán on a U.S. extradition warrant, but then released him to avoid what officials feared would be a bloodbath.

“Hard to imagine that what happened in #Sonora today won’t impact [Mexico-U. S.] relations and security policy in [Mexico],” wrote Falko Ernst, Mexico analyst for the International Crisis Group, on Twitter. “Over the next days, I’d expect pressure within the U.S. to build on the Trump [administration] — by media and evangelicals, e.g. — and for that pressure to be passed onto López Obrador.”

Mormons began to settle in Mexico and Canada in the 1870s and 1880s to avoid being prosecuted by the U.S. government over their practice of polygamy, according to Matthew Bowman, a historian at Henderson State University in Arkansas who has studied the Mormon Church.

MANCHESTER — City police are looking for two men after a woman said they burst into her West Side apartment early Thursday, ordered her to the ground, then allegedly fired a shot at a witness.