Suspended Salem police Sgt. Michael Verrocchi has kept his certification for police work, after convincing a certification board that a high-speed chase in 2012 was a mere prank that veteran Salem police officers play on rookies.

But his defense strategy prevailed and became clear in September, when he appeared before the Police Standards and Training Council in Concord for a hearing on whether to suspend his certification.

Verrocchi, 42, asked for the hearing to be open. Six current or retired Salem police officials, some implicated in the ongoing saga involving the department, testified.

“Older officers would pull a prank on younger officers and try to get an officer to chase them, then pull over, then kind of laugh like it was a joke,” retired Deputy Police Chief Shawn Patten testified. The hearing was detailed in recently posted minutes.

Patten fell victim to the prank when he was a rookie, and he testified that he “probably” pulled the stunt once he rose in the ranks. 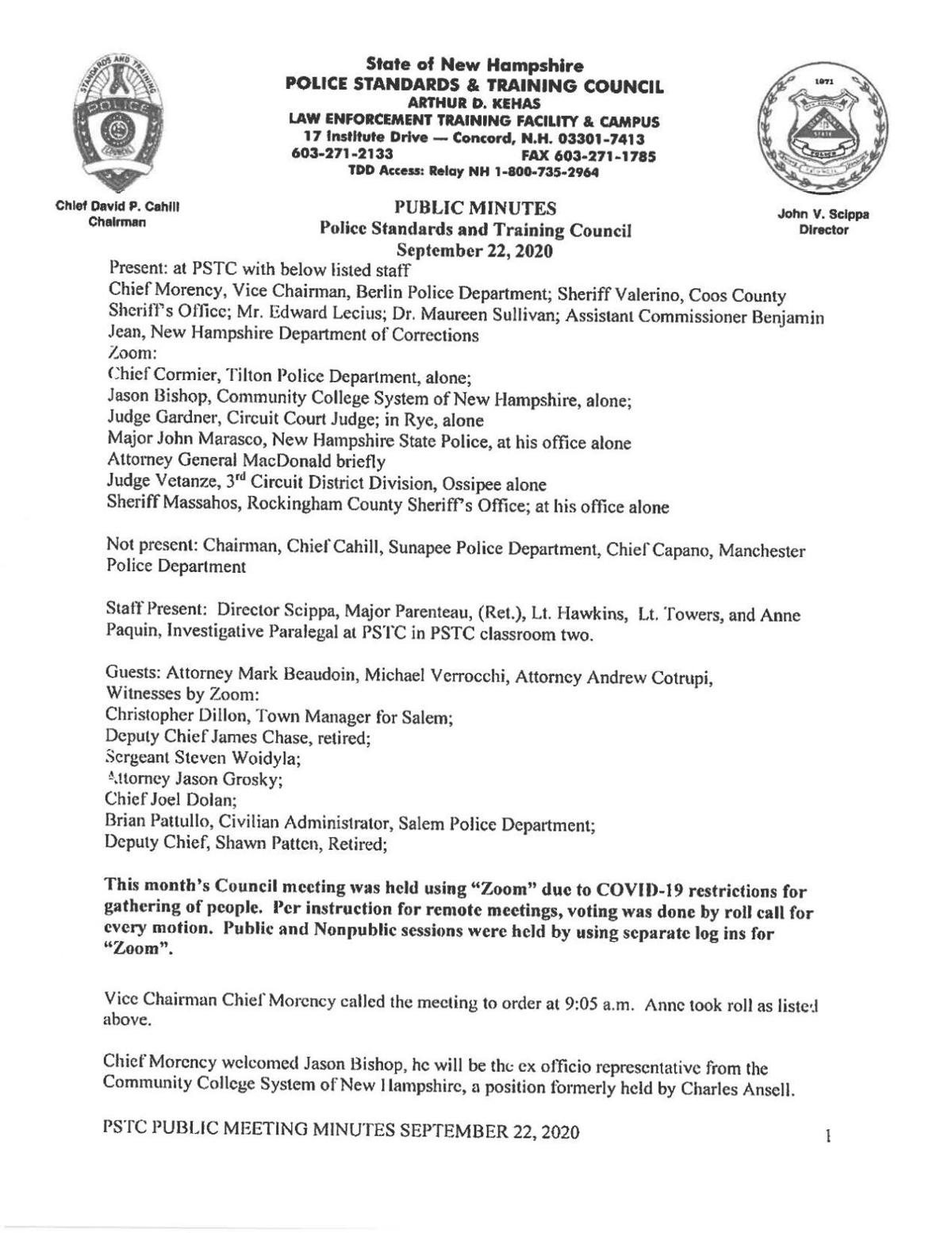 After hearing the testimony, the council voted unanimously with two abstentions not to suspend Verrocchi’s certification.

Attorney General Gordon MacDonald, who is heading a criminal investigation into the Salem Police Department and sits on the council, was on hand for the testimony during the teleconference meeting.

He departed shortly before the vote, according to the Sept. 22 minutes.

In November 2018, an audit reported a host of issues with the Salem Police Department, including mismanaging internal investigations and violations of department policies.

Paul Donovan resigned as Salem police chief shortly afterward. MacDonald’s office launched an investigation in early 2019, and Verrocchi was one of two people eventually charged with crimes. One of the targets in the investigation, former deputy police chief Robert Morin, has never been charged.

When allegations first surfaced about Salem police, Verrocchi took to social media to defend his department. The president of the local union representing Salem officers called the audit a waste of money and a “complete and utter pile of (expletive).”

He also wrote: “Wolves don’t lose sleep over the opinion of sheep.”

Indictments allege Verrocchi drove at a high speed for more than two miles while pursued by rookie Officer Sean York. He ran a red light and avoided a spike strip. He faces a felony charge of reckless conduct with a deadly weapon and disobeying a police officer, a misdemeanor.

According to the Police Standards and Training Council minutes, Verrocchi admitted to the prank in 2012 when confronted by his superiors. He received a one-day suspension.

His lawyers have gone as far as writing his side of the story in documents filed in the criminal case, but that document has been sealed, according to the court system.

“No part of this case is a surprise to anyone,” said his criminal defense lawyer, Andrew Cotrupi of Hampton. “He told people in 2012 what he did and told investigators. If he has to tell a jury, he will.”

Cotrupi has tried to get the case thrown out, arguing it exceeds the statute of limitations. He has also sought any instructions that prosecutors gave to the grand jury on the legal issues involving the case. A judge has rejected the requests.

The decision by the council means that Verrocchi will be cleared to get a job in law enforcement if he is found eventually innocent or prosecutors drop the charges.

“He fully plans to return to law enforcement. It’s his life’s work,” Cotrupi said. He now works at his family’s restaurant because of the case.

Meanwhile, Wagner has had his case transferred from a federal court in Massachusetts to U.S. District Court in Concord. His lawyers argued he just had a kidney transplant and is immunocompromised and at a greater risk of contracting the coronavirus in Boston than in Concord.

The case was transferred in September and District Court Judge Joseph Laplante, a former homicide prosecutor, quickly recused himself. The case rests with Judge Paul Barbadoro.

An elementary school speech therapist who was found dead in her home Tuesday is being remembered as a “beloved staff member” as well as a “vibrant and integral part of the community.

NH's Jerry DeLemus not on list of Trump presidential pardons

The wife of imprisoned conservative activist Jerry DeLemus said she "cried for a couple of minutes" when she learned that Donald Trump, on his last day as president, had not pardoned her husband for crimes associated with the Bundy ranch standoff in 2014.

A Rochester man who did prison time for robbing a bank six years ago was sentenced to nearly eight years in federal prison this week for robbing a gas station and attempting to rob a bank on the same day in Dover last year.

MIAMI — A federal judge on Tuesday ordered the unsealing and release of dozens of documents in a now-settled civil suit involving Ghislaine Maxwell, the jailed and accused co-conspirator of the sex offender Jeffrey Epstein, but afforded the longtime Epstein associate a measure of privacy by …

Third person arrested in West Side fight that ended with gunshots

Third person arrested in West Side fight that ended with gunshots

City man charged with riot in connection with West Side fight

City man charged with riot in connection with West Side fight